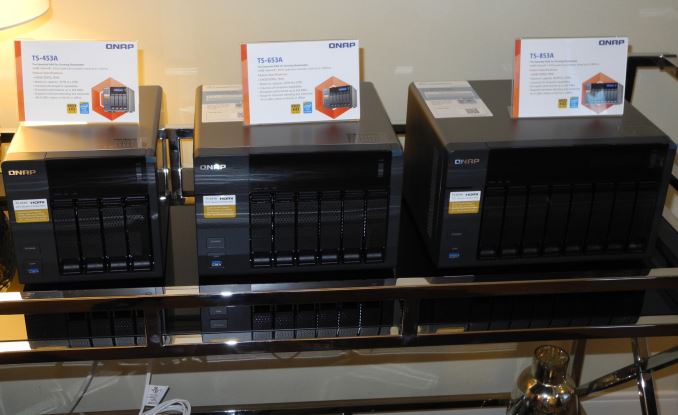 At CES 2016, QNAP showed off what they had been introducing into the APAC market over the last three months. CES was used to make the North American market aware of the new models. While we have the usual 4-, 6- and 8-bay NAS units based on Braswell, three products stood out - a 4-'bay' NAS using M.2 SSDs, a 16-bay dual-CPU 40GbE-capable NAS with 12Gbps SAS support and QNAP's first foray into the high-end enterprise space with a ZFS NAS running a completely different operating system (QES based on FreeBSD). Before talking about the expected Braswell updates, we will take a look at the three unique products from the QNAP stable.

The TBS-453A looks more like a mini-PC, rather than a NAS.

The most surprising aspect of the chassis is the presence of five RJ-45 ports. These appear as two physical LAN ports to the OS (since the second set of four is actually connected to the main SoC using a hardware switch chip).

Removing the bottom panel reveals four M.2 slots (capable of supporting M.2 2242, 2260 and 2280 SSDs) and two DDR3L SO-DIMM slots. The 2.08 GHz 4C/4T x86 SoC (Intel Celeron N3150 belonging to the Braswell family) is cooled by a notebook fan (SUNON MF60090V1-C482-S9A). The absence of any 2.5" or 3.5" drives make it quite compact. The combination of ports, speed and relative silence make it suitable for file sharing, presentations and multimedia applications (including karaoke singing concerts) in a portable form factor.

The QTS Network Manager incorporates software-defined virtual switch technology providing configuration flexibility. The presence of five RJ-45 ports on the unit can lead to some interesting applications such as private networks for surveillance cameras.

The TBS-453A also supports Linux using Docker functionality. QNAP has always had the Hybrid Desk (HD Station) app to enable video output over HDMI on selected QNAP NAS models. Linux Station builds upon Hybrid Desk and utilizes containers to provide users with a complete Linux desktop on the NAS. The NASbook along with Linux Station can act as a standard Linux desktop in this way. 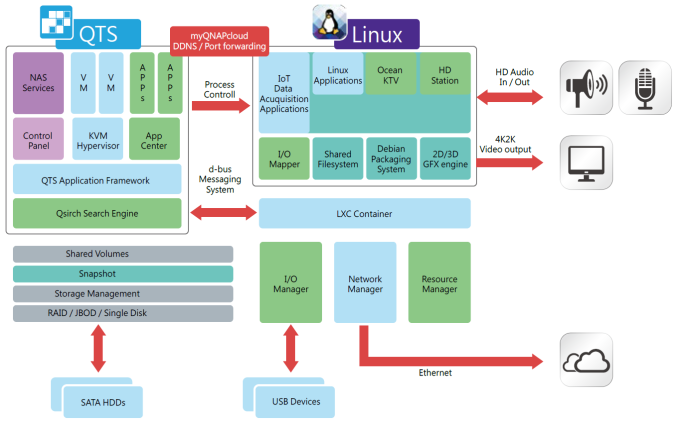 Other than these features, the usage of Braswell provides AES-NI capabilities for better performance with encrypted volumes and folders. The integrated Quick Sync engine can also transcode 4K material (both in real-time and offline) Container Station and Virtualization Station enable a number of different applications (including the running of different OSes on the machine as well as sandboxing certain processes for greater security).

Dual HDMI ports allow for multimedia enjoyment using apps such as Kodi. The unit also comes with an IR receiver and remote. Apps such as OceanKTV allows for usage of the NASbook as a karaoke system.

Other than the above unique features, the standard QTS capabilities for data storage, backup and file sharing exist in the NASbook also. The storage capacity of the TBS-453A can be expanded via the UX-500P and UX-800P which provide five and eight 2.5" / 3.5" drive bays respectively. They can connect to the TBS-453A using one of the USB 3.0 ports. 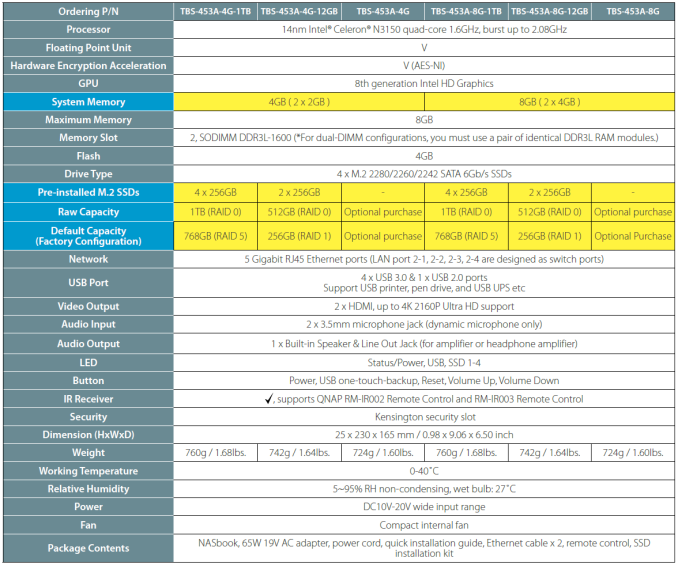 We do not have concrete pricing information yet, but, with the launch towards the end of this quarter, that should soon be clarified. 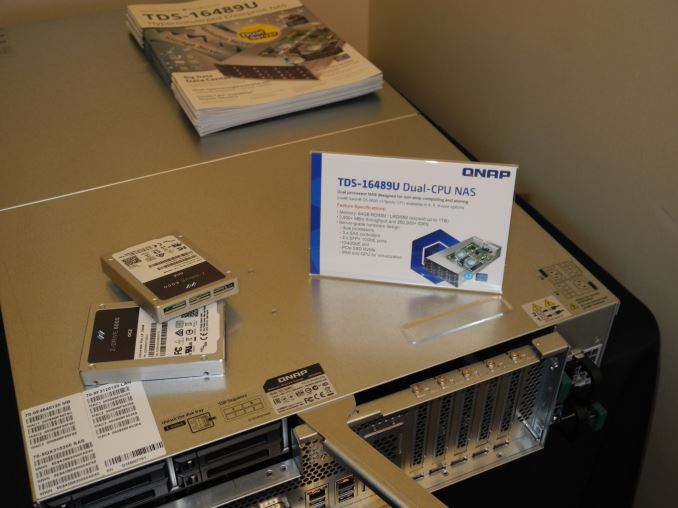 The TDS-16489U is, in QNAP's own words' a hyperconverged enterprise NAS. The capabilities of the unit are best brought out using the hardware architecture documentation. 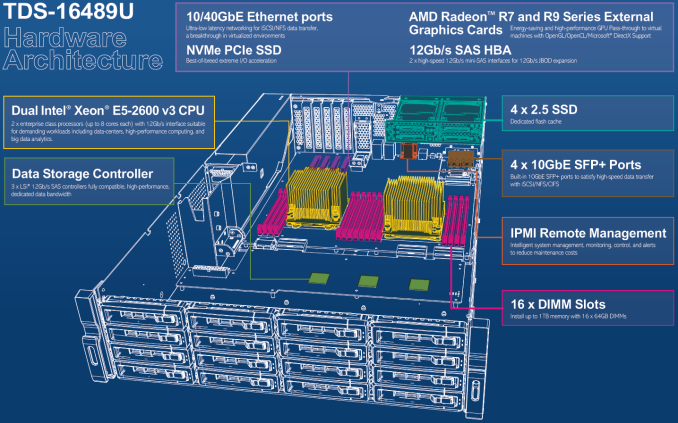 The software capabilities enable the unit to act as both a storage server and an application server. QNAP's QTS provides all the storage server functionality. Linux and Windows VMs can enable all the compute heavy stuff. The usage of powerful Xeon CPUs give the unit bonafide data center server credentials. 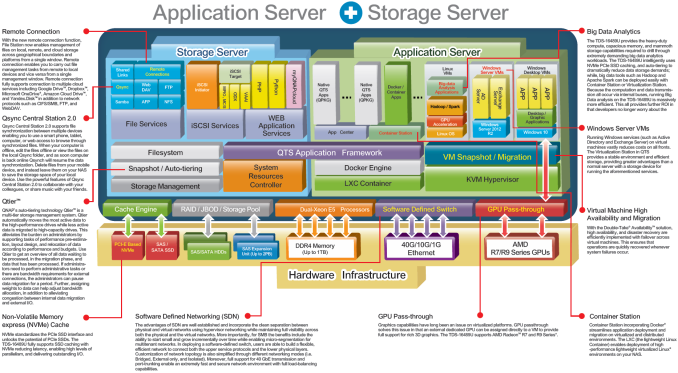 In a tradtional setup, boxes such as those from QNAP are used as a storage server, with another server running Hyper-V or some VMWare tools for virtualization. Even though QNAP's Virtualization Station can't hold a torch to those dedicated virtualization systems, it comes with no licensing costs and enables tighter integration of the guest OS and the storage server infrastructure in products such as the TDS-1648U.

The hardware specifications of the NAS are reproduced below 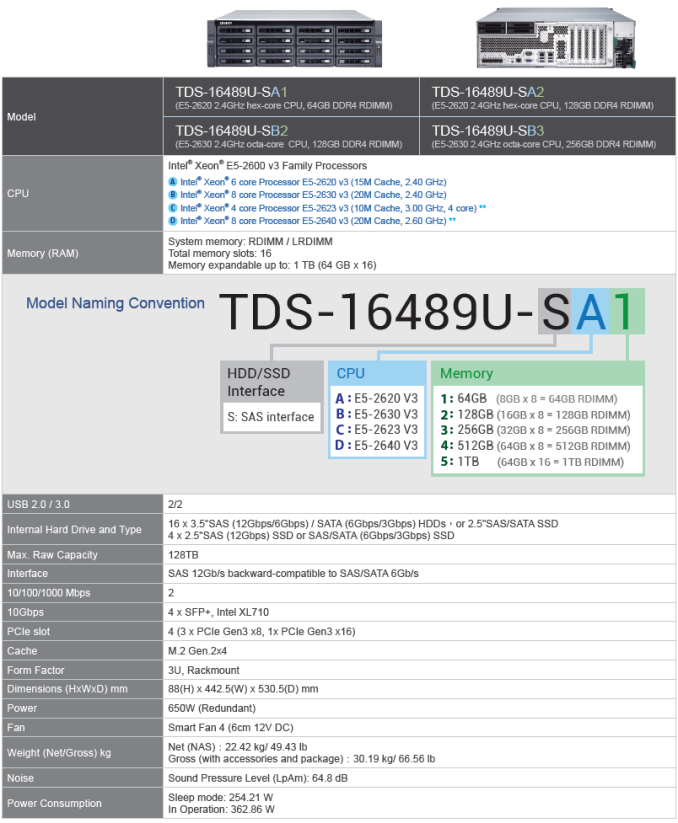 Pricing information has not been made available yet. 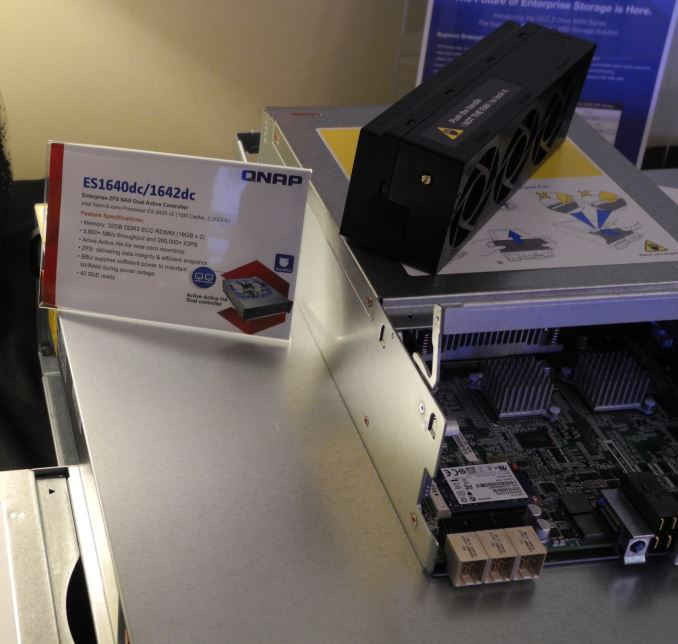 QNAP also talked about their upcoming ES1640dc, which is a significant departure from their usual products.
Unlike the traditional Turbo NAS models that run the Linux-based QTS, this unit runs QES 1.1, and is based on FreeBSD. The important enterprise-targeting feature is the move from ext4 to ZFS for the file system. 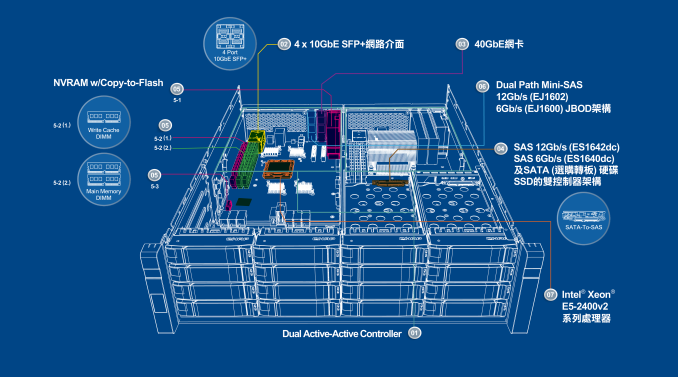 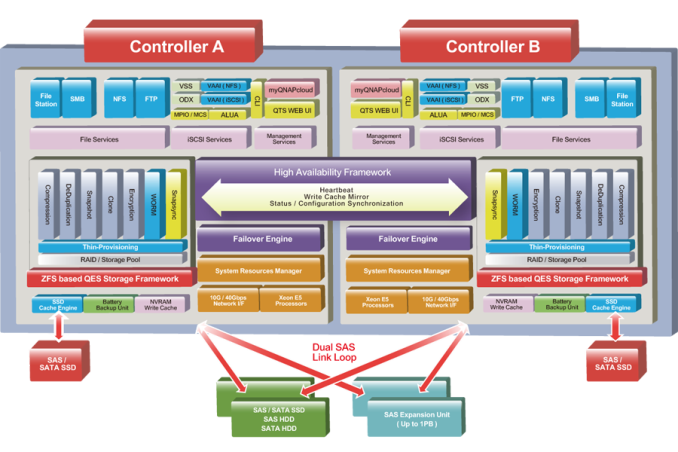 While the move to QES with ZFS brings features such as inline compression, data deduplication, checksumming / bitrot protection and increased shapshot capabilities, we lose support for powerful QNAP apps such as Virtualization Station and Container Station.

On the hardware side, the ES1640dc and ES1642dc both come with dual active controllers in order to provide high availability if one of the controllers were to fail. The units also provide support for usage of a DRAM DIMM as a write cache as long as a dedicated battery backup unit is installed to copy contents to a mSATA SSD when power fails. Additionally, this scheme also reduces wear on the flash memory when the mSATA SSD is used as a write cache. The EJ1600 / EJ1602 expander modules (again, with dual controller support) can be used to increase the storage capacity of the ES1640dc.

Moving on to other SMB-focused products, QNAP also had the TS-x53A on display in their suite. Based on the Intel Celeron N3150 platform, these products make up the Braswell update to the Bay Trail-based TS-x53 series. Like the TBS-453A NASbook, the TS-x53A series come with two HDMI outputs, two microphone inputs
Recent software updates have enabled apps such as the JRiver Media Center for media management and playback. The other unique features such as the ability to run full-fledged Linux using Linux station have already been covered in the NASbook section. 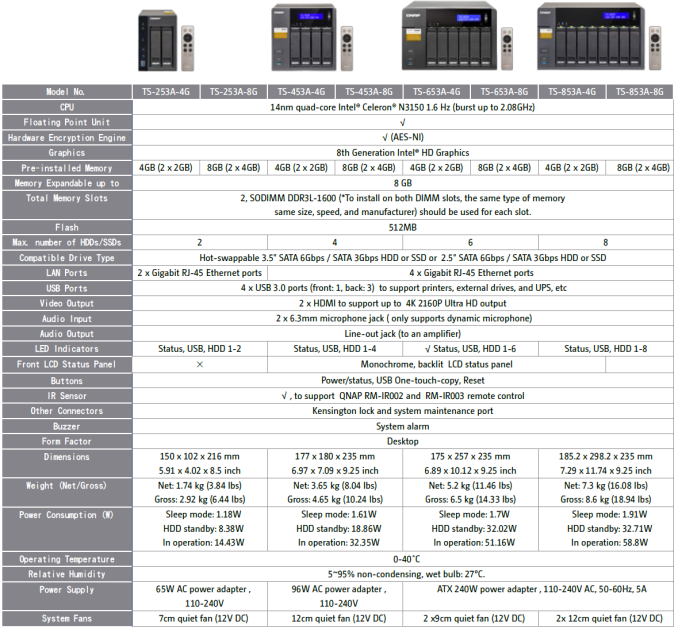 The full specifications of the various models in the TS-x53A lineup are in the extract from the above spec sheet.

On the whole, I would say that QNAP had a quiet CES. There was one major innovative product in the TBS-453A NASbook. The rest of the products show the direction in which QNAP has been heading, but they have all already been talked about in the APAC market. The only disappointing aspect, in my opinion, was that QNAP had no updates to share on the move from ext4 to btrfs for their home consumer and SMB lineup. Considering that Netgear has already been shipping an implementation for more than a year now, and Synology is shipping btrfs in beta form for a couple of months now, this was quite surprising.