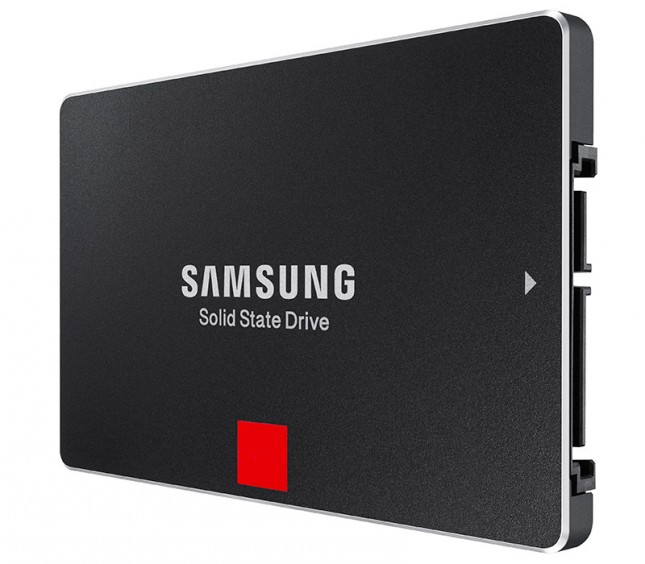 During the early days of SSDs, we saw rather quick development in capacities. The very first SSDs were undoubtedly small, generally 32GB or 64GB, but there was a need for higher capacities to make SSDs more usable in client environments. MLC NAND caused a rapid decline in prices and the capacities quickly increased to 128GB and 256GB. 512GB also came along fairly soon, but for a long while the 512GB drives cost more than a decent gaming PC with prices being over $1000.

I would argue that the 512GB drives were introduced too early - the adoption was minimal due to the absurd price. The industry learned from that and instead of pushing 1TB SSDs to the market at over $1000, it wasn't until 2013 when Crucial introduced the M500 with the 960GB model being priced reasonably at $600. Nowadays 1TB has become a common capacity in almost every OEM's lineup, which is thanks to both lower NAND prices and controllers being sophisticated enough to manage 1TB of NAND. The next milestone is obviously the multi-terabyte era, which we are entering with the release of 2TB Samsung 850 Pro and EVO models. 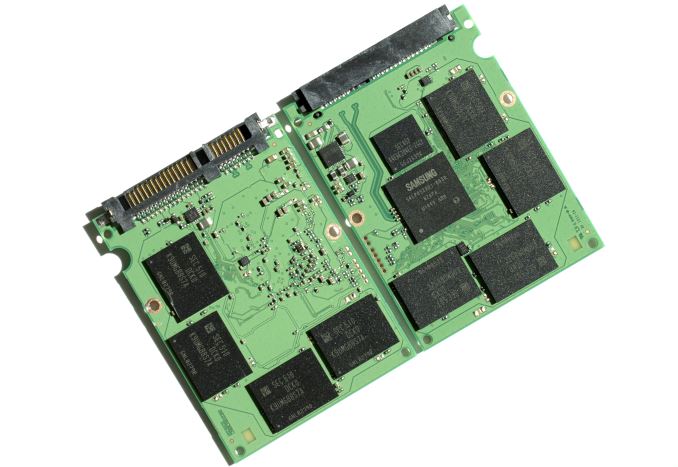 Breaking capacity thresholds involves work on both the NAND and the controller side. All controllers have a fixed number of die they can talk to and for modern 8-channel controllers with eight chip enablers (CEs) per channel the limit is typically 64 dies. With 128Gbit (16GB) being the common NAND die capacity today, 64 dies yields 1,024GB or 1TB (as it's often marketed). It's possible to utilize a single CE for managing more than one die (which is what e.g. Silicon Motion does to achieve 1TB with a 4-channel controller), but it adds complexity to the firmware design and there's a negative performance impact as the two dies on the same chip enabler can't be accessed simultaneously.

Increasing NAND capacity per die is one way to work around the channel/CE limitation, but it's generally not the most efficient way. First off, doubling the capacity of the die increases complexity substantially because you are effectively dealing with twice the number of transistors per die. The second drawback is reduced write performance, especially at smaller capacities, as SSDs rely heavily on parallelism for performance, so doubling the capacity per die will cut parallelism in half. That reduces the usability of the die in capacity sensitive applications such as eMMC storage, which don't have many die to begin with (as the same dies are often used in various different applications ranging from mobile to enterprise). 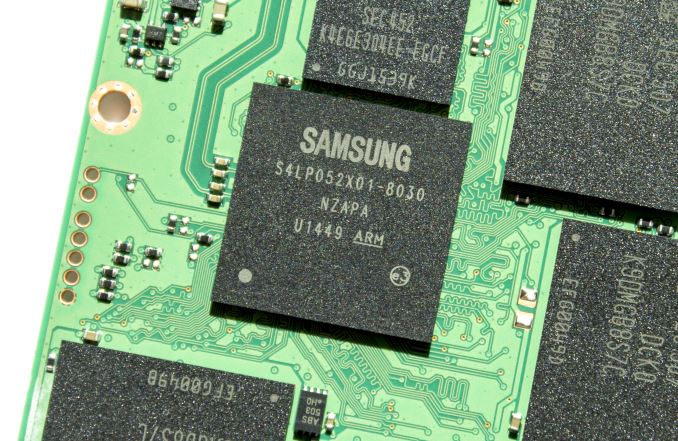 The real bottleneck, however, is the DRAM controller. Today's NAND mapping table designs tend to require about 1MB of DRAM per 1GB of NAND for optimal performance, so breaking the 1TB limit requires a DRAM controller capable of supporting 2GB of DRAM. From a design standpoint, implementing a beefier DRAM controller isn't a massive challenge, but it eats both die and PCB area and hence increases cost. Given how 2TB SSDs are currently a relatively small niche, embedding a DRAM controller with 2GB support for a mainstream controller isn't very economical, which is why today's client-grade SSD controller usually support up to 1GB to increase cost efficiency.

Initially the 850 EVO was supposed to carry a 2TB SKU at the time of launch, but Samsung didn't consider the volume to be high enough. As Samsung is the number one manufacturer of client SSDs and supplies millions of drives to PC OEMs, the company is not really in the business of making low volume niche products, hence the release of 2TB client SSDs was postponed in wait for lower pricing and higher demand as a result.

The new 2TB versions of the 850 Pro and EVO both use Samsung's new MHX controller. I was told it's otherwise identical to the MEX besides the DRAM controller supporting up to 2GB of LPDDR3, whereas the MEX only supports 1GB of LPDDR2. The MGX is the lighter version of MEX with two higher clocked cores instead of three slower ones, and it's found in the 120GB, 250GB and 500GB EVOs.

Specification wise the 2TB 850 Pro is almost identical to its 1TB sibling. The performance on paper is an exact match with the 2TB model drawing a bit more power in DevSleep mode, which is likely due to the additional DRAM despite LPDDR3 being more power efficient than LPDDR2. Initially the 850 Pro was rated at 150TB of write endurance across all capacities, but Samsung changed that sometime after the launch and the 512GB, 1TB and 2TB versions now carry 300TB endurance rating along with a 10-year warranty. 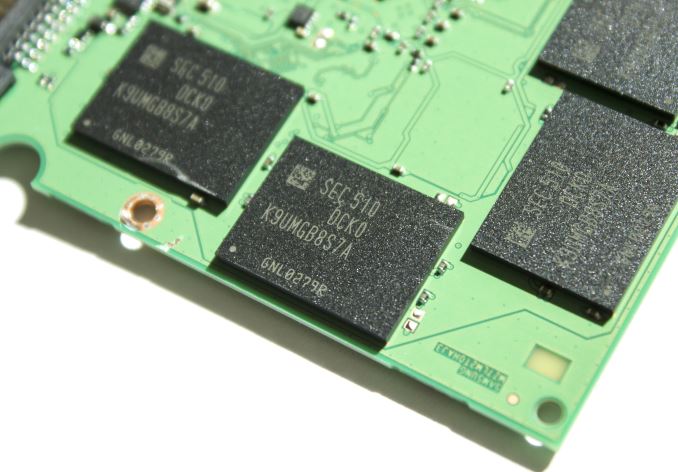 There's another hardware change in addition to the new MHX controller as the NAND part number suggests that the 2TB 850 Pro uses 128Gbit dies instead of the 86Gbit dies found in the other capacities. The third character, which is a U in this case, refers to the type of NAND (SLC, MLC or TLC) and the number of dies, and Samsung's NAND part number decoder tells us that U stands for a 16-die MLC package. With eight NAND packages on the PCB, each die must be 128Gbit (i.e. 16GiB) to achieve raw NAND capacity of 2,048GiB. 2,048GB out of that is user accessible space, resulting in standard ~7% over-provisioning due to GiB (1024^3 bytes) to GB (1000^3 bytes) translation.

According to Samsung, this is still a 32-layer die, which would imply that Samsung has simply developed a higher capacity die using the same process. It's logical that Samsung decided to go with a lower capacity die at first because it's less complex and yields better performance at smaller capacities. In turn, a larger die results in additional cost savings due to peripheral circuitry scaling, so despite still being a 32-layer part the 128Gbit die should be more economical to manufacture than its 86Gbit counterpart.

Like the 2TB Pro, the EVO has similar performance characteristics with the 1TB model. Only power consumption is higher, but given the increase in NAND and DRAM capacities that was expected. 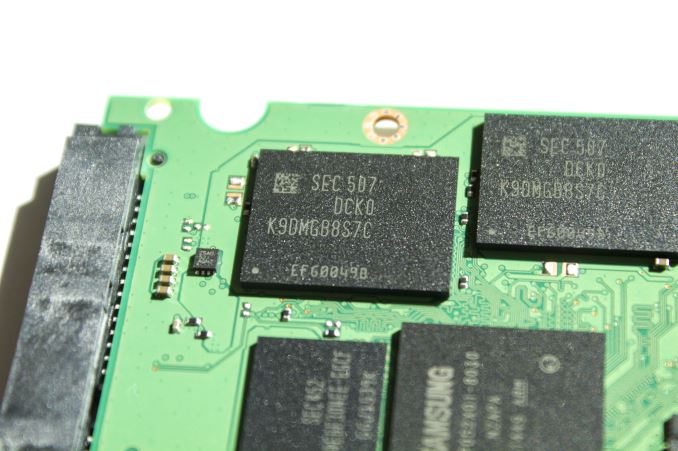 As the 32-layer TLC V-NAND die was 128Gbit to begin with, Samsung didn't need to develop a new higher capacity die to bring the capacity to 2TB. The EVO also uses eight 16-die packages with the only difference to Pro being TLC NAND, which is more economical to manufacture since storing three bits in one cell yields higher density than two. Out of the 2,048GiB of raw NAND, 2,000GB is user-accessible, which is 48GB less than in the 2TB 850 Pro, but the TurboWrite SLC cache eats a portion of NAND and TLC tends to require a bit more over-provisioning to keep the write amplification low for endurance reasons.