As mentioned in the introduction of the P8, the new Kirin 930 SoC is an octa-core A53 with one low-power quad-core cluster with a frequency range going from 403MHz up to 1516MHz, and another high-powered cluster going from 1017MHz up to 2016MHz. I was able to determine that the L2 cache size of the high-performance cluster comes in at 512KB, but due to no available rooting mechanisms for the device I couldn't manipulate the device to lock our benchmark tool onto the small cores to determine their exact configuration.

Generally, due to this being an A53 device, we shouldn't be expecting any stellar performance as ARM's little core is about 2-2.5 times slower as an equivalently clocked larger architecture such as an A15 or A57 CPU. So while Huawei ramps up the clocks quite high at 2GHz, it's still very much more of a mid-range performer. 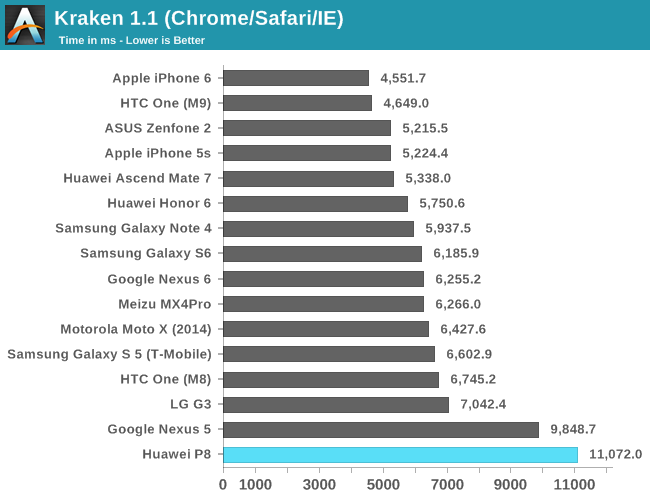 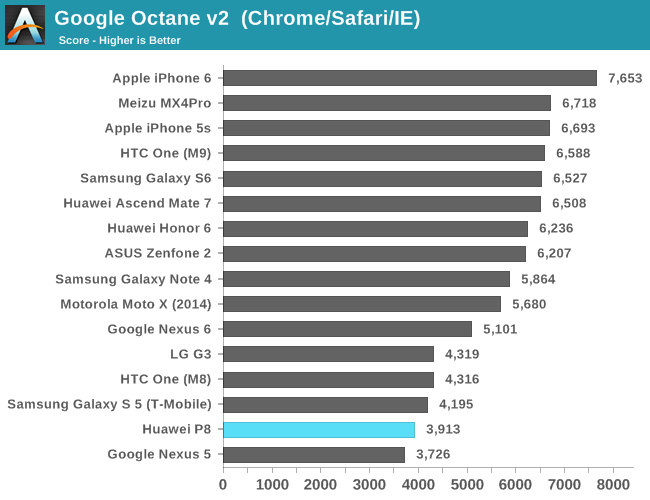 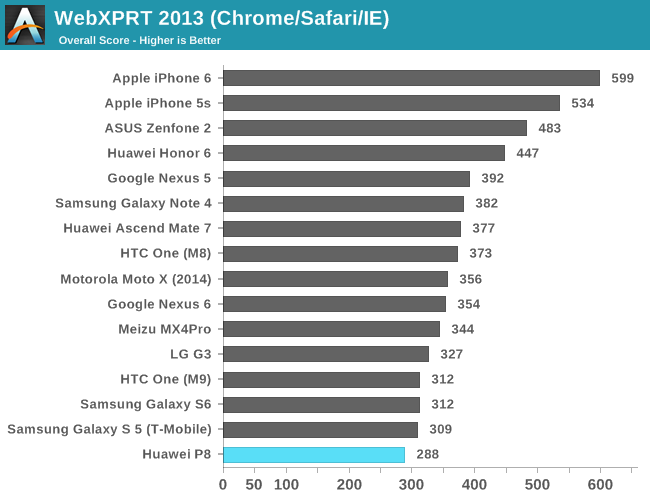 As expected, our in-browser benchmarks put the P8 at the lower-end of the performance spectrum as it simply doesn't have enough processing power to keep up with the competition. I also tested out to see if the stock browser would have any optimizations, but it performed more or less the same as Chrome. This makes sense as compiler targets shouldn't affect an in-order architecture such as the A53 as much as larger and more complex cores as ARM's big lineup of CPUs.

While the Javascript benchmarks represent a good insight in performance when browsing websites in a browser, it's far more common for users to experience web content via third-party applications which make use of a built-in WebView frame, in which case the OS's WebKit engine is used.

PCMark is such a test, where we can analyse performance numbers more representative of daily use-cases. 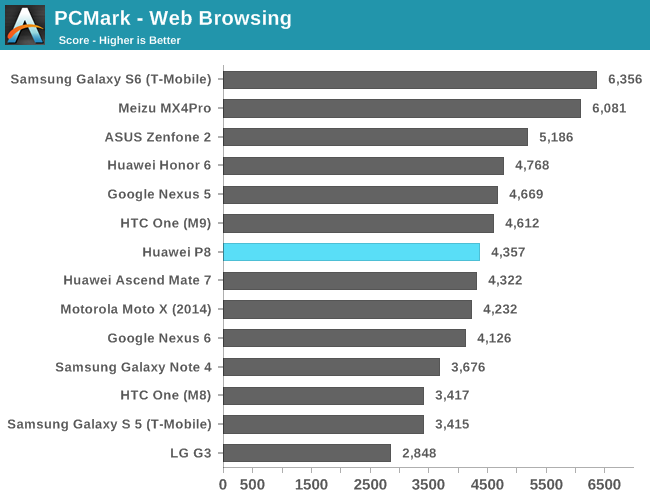 In the Web Browsing test, the P8 manages to land in the middle of the crowd. We saw large performance improvements coming from the Android 5.0 Lolipop update on several of our devices, and we're still in the process of updating all devices to the latest firmware to be able to re-test them. 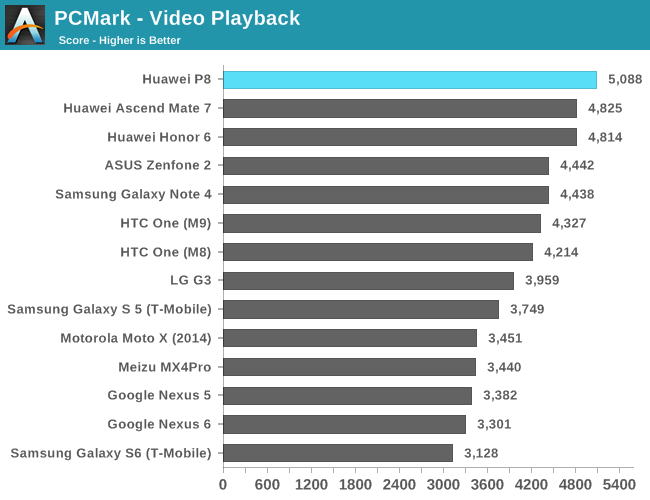 Oddly enough, the P8 mananges to take the top spot in the Video Playback test as several other Lolipop devices regressed in this test when compared to KitKat. 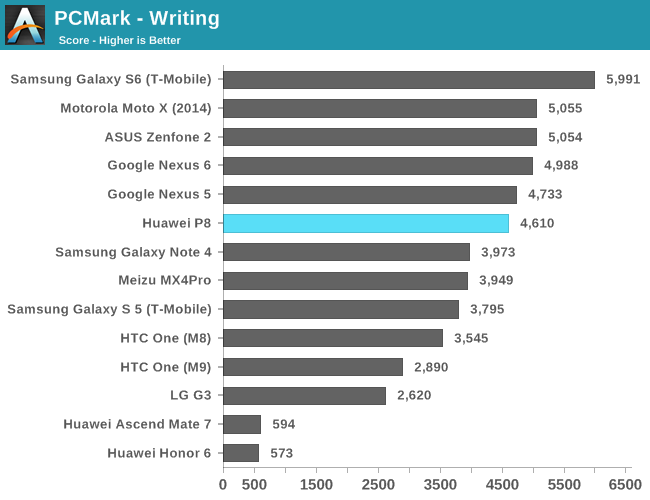 The Writing test is a sub-test which is very sensitive to actual OS and runtime optimizations; Huawei's KitKat devices performed horribly in this test as they suffered from some very obvious problem with Dalvik. Luckily the P8 and the combination of ART (Android RunTime) of Android 5.0 manage to keep it performing very well with other flagship devices. 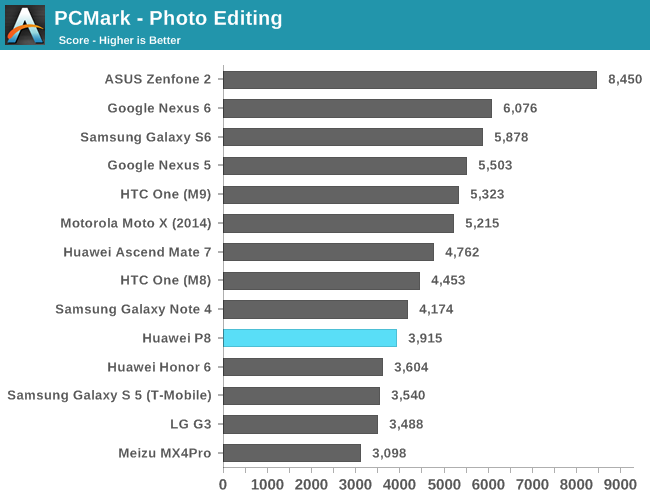 The Photo Editing test uses RenderScript to offload processing algorithms to the GPU. The Kirin 930's Mali T628MP4 performs averagely as it struggles to keep up with the beefier implementations and optimized drivers of other devices. 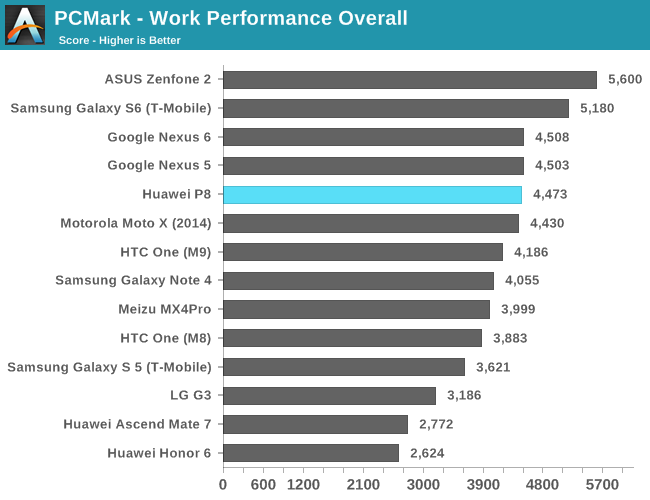 Continuing on to BaseMark OS II 2.0, which is another similar real-world benchmark which measures system performance influenced by the runtime and APIs. 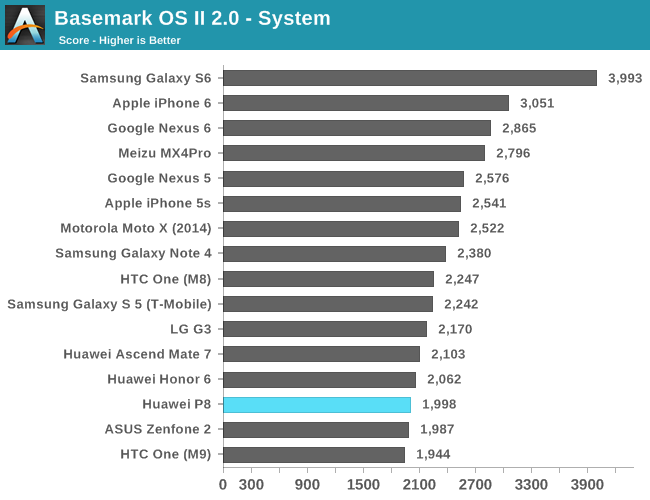 The system benchmark of BaseMark OS is more processing power oriented, as as such, the A53 cores don't perform as well in this test. 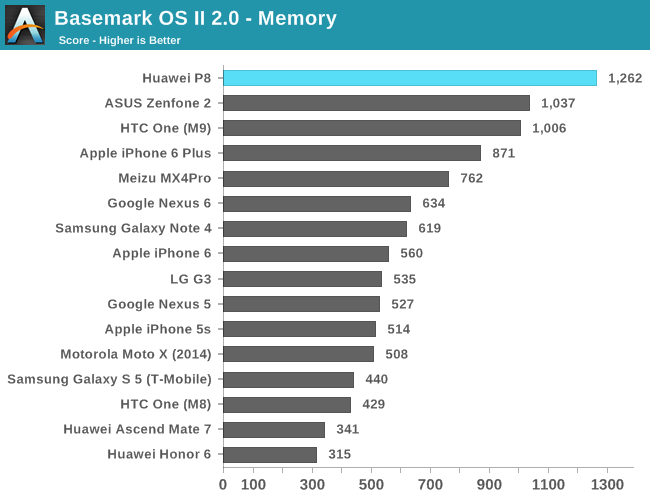 Surprisingly, the P8 performed excellently in the memory test. This is a benchmark which stresses the NAND and CPUs. Huawei has made huge improvements over the low-speed NAND which was implemented in the Honor 6 and Mate 7, and as we'll later see in the in the more throrough eMMC testing, has paid off well for the P8 as we see performance differences of night and day. 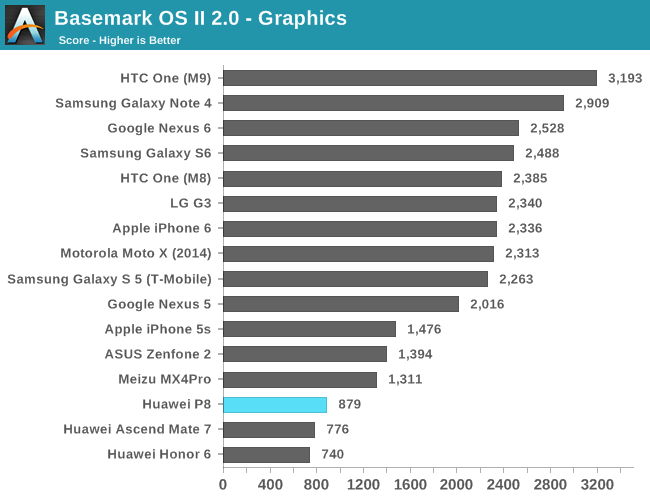 The Mali GPU sadly again finishes among the last of the bunch, as it looks like combination of a smaller core implementation and older drivers puts the P8 among its bretheren Kirin SoCs at the bottom of the graphics test. 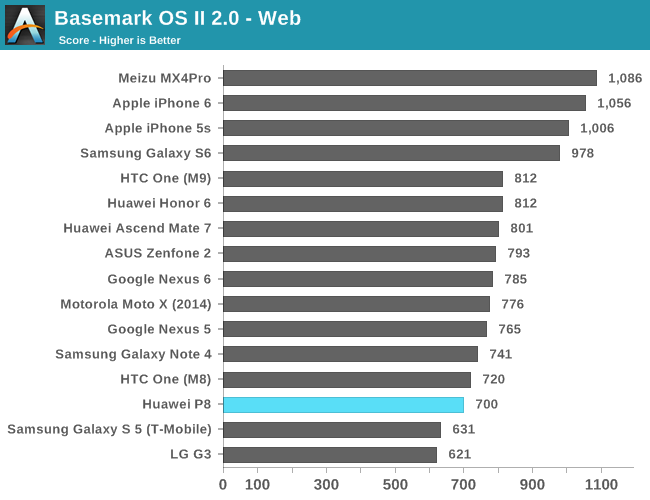 The web test is again a CPU heavy test and the A53 only ends up with average performance. 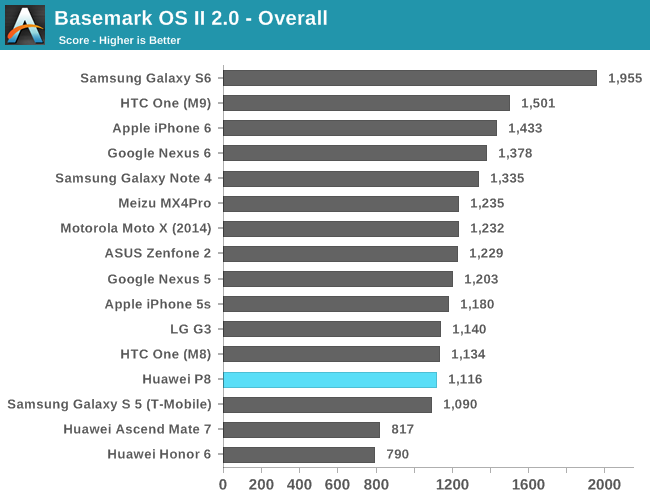 Again, the overall score ends up average for the P8. In every-day usage the device still manages to be quite fast even though it can't be compared to other flagship devices with stronger SoCs. HiSilicon especially seems to have some issues with fluid performance when CPU demand spikes very strongly, as one will notice small stutters throughout some apps when more heavy processing is being performed, something I often reproduce on other big.LITTLE SoCs when I disable aggressive scheduler migrations.