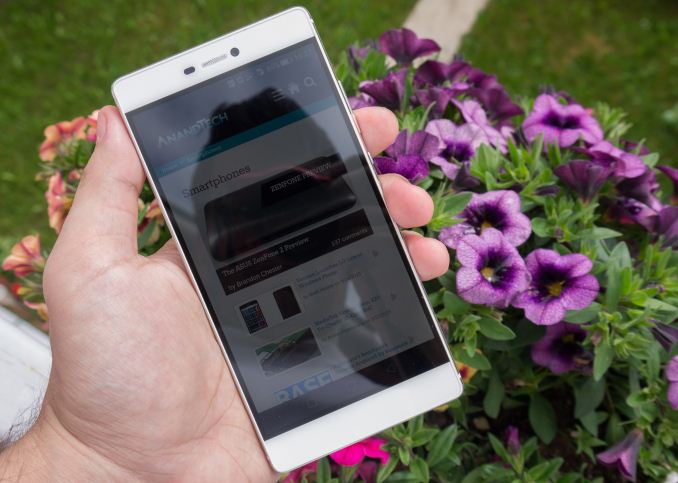 It’s been a month now since Huawei launched its new smartphone flagship, the P8. Huawei started Ascend P-line of smartphones back in 2012 with the launch of the Ascend P1, and has since iterated every year with the follow up P6, P7, and this year’s P8. A notable deviation from the standard naming scheme is that Huawei chose to drop the Ascend brand and this year’s official name is simply the “Huawei P8”. The P-series targets the higher-end market through more robust and premium build quality, while the separate Honor brand is targeted at mainly the Chinese and other budget markets. The Mate family covers the phablet form-factor, although Huawei now also offers a super-sized P8max with 6.8” screen that kind of blurs the size segmentation.

In trying to broaden our coverage of emerging players in the mobile space, we had the pleasure of extensively covering two of Huawei’s devices over the last year – the Honor 6 and the Mate 7, so be sure to read those articles to have a good overview of Huawei’s previous efforts in terms of Emotion UI software implementations and specifics of the HiSilicon Kirin SoCs. 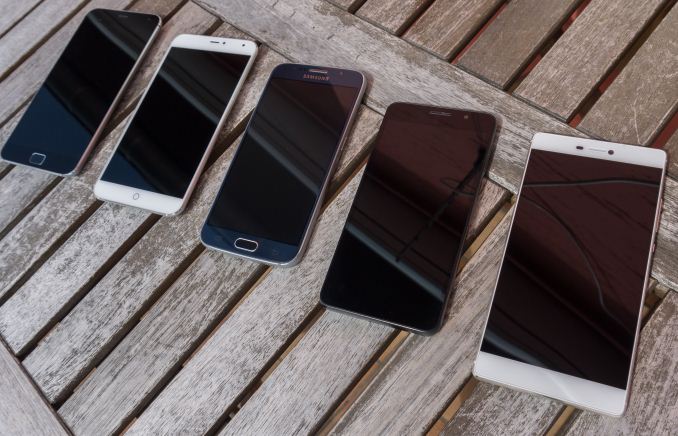 The P8 succeeds the Ascend P7 – both are the 5” form-factor devices aiming at the high-end segment. The P8 differs quite a lot from the P7 by ditching the glass back in favour of an all-metal unibody with rounded sides. The size also goes up a bit as the display continues to grow from 4.7” and 5” on the P6 and P7 up to 5.2” on the P8. The device gains 3mm in width and 5.1mm in height over its predecessor, reaching dimensions of 144.9 x 71.8 x 6.4mm. The device remains still very thin at 6.4mm and thus helps its ergonomics.

Before we look closer at the design choices, let’s go over the specifications of the P8’s hardware.

Huawei continues to use its in-house HiSilicon-designed SoCs with the use of a new Kirin 930 or 935. The SoC is a dual-cluster piece sporting a total of 8 ARM Cortex A53 CPU cores. Differing from the usual big.LITTLE implementations were the silicon vendor would choose to use two differing CPU architectures, the Kirin 930’s use a low-frequency and leakage optimized A53 cluster paired with a high-frequency and higher leakage variant. HiSilicon calls this higher frequency core an A53e, although the piece should have no architectural differences to a traditional A53 other than an optimized physical layout to enable the higher operating frequencies.

There was some confusion as to why two SoC model numbers were referenced during the announcement of the device, but the end story seems to be is that HiSilicon brands the same piece of silicon; the Hi3635 differently based on the frequency binning it is able to reach. As such, the cheaper variants of the P8 and P8max come with the Kirin “930” with the fast A53 cluster clocked in at 2.0GHz and 16GB of NAND memory, while the more expensive models with 64GB of storage come with the Kirin “935” clocking in at up to 2.2GHz on its performance cluster. We’ve already seen this practice in the Honor 6 and Mate 7, both using the same Hi3630 chipset but branded slightly differently (Kirin 920 and Kirin 925) due to the higher clocks on the latter model.

Other than the CPU architecture change, the Hi3635 seems to differ very little to the Hi3630. We still see an ARM Mali T628MP4, running at slighter higher clocks of 680MHz. The memory sub-system is also again furbished by a 32-bit dual-channel LPDDR3-1600 memory controller design, which serves 3GB of total memory in all of the P8’s models. As expected, Huawei continues to use TSMC’s 28nm process;

HiSilicon first equipped an integrated modem in the Kirin 920, and the 930 continues this although with a slight downgrade in capability as it only supports UE Category 4 LTE speeds, reaching up to 150Mbps downstream and 50Mpbs upstream.

It’s on the camera that Huawei has undoubtedly focused most of its attention on in the P8. We had some very harsh words for the Honor 6’s and Mate 7’s camera performances, as both featured very disappointing photo and video quality. The P8 looks to change this through the introduction of a brand new Sony sensor, the IMX278. This is the second kind of implementation RGBW (Or RGBC) after the OmniVision unit found in the original Moto X. Huawei also abandons on-SoC still-image processing for a dedicated Altek external ISP. To finish things off, the camera module supports two-axis optical image stabilization with up to 2° of movement freedom. All these changes mark a significant upgrade for Huawei, and it seems to pay off for the P8, which we’ll cover in more detail in the camera section.

Getting back to the P8’s design, we see an evolution of the all-metal chassis which was introduced in the Mate 7. The P8 remains a unibody design with a non-removable 2680mAh (10.19Whr) battery. The front of the phone follows the traditional slab design with the 1080p screen taking up 78.3% off the front’s footprint. It should be noted that the black frame surrounding the actual screen makes it seem as if the device’s size-bezels are much smaller than what they really are, something which is very visible on the lighter coloured models. 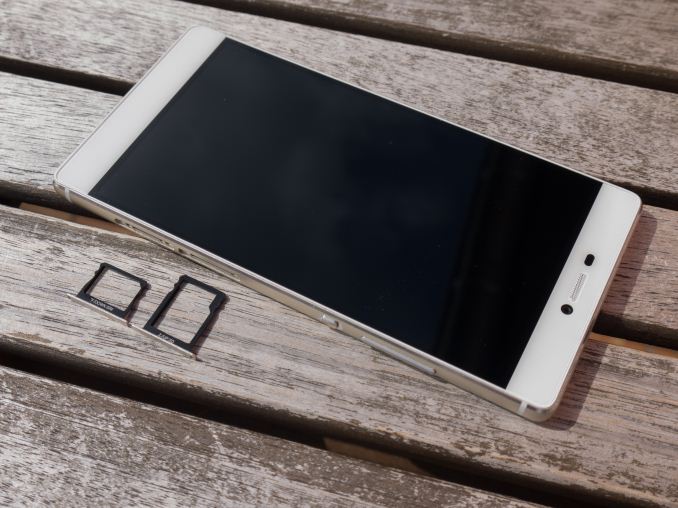 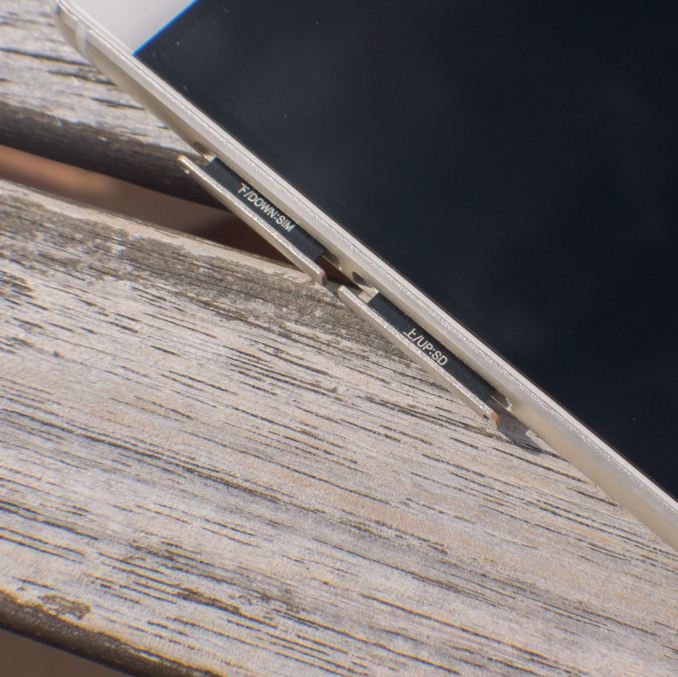 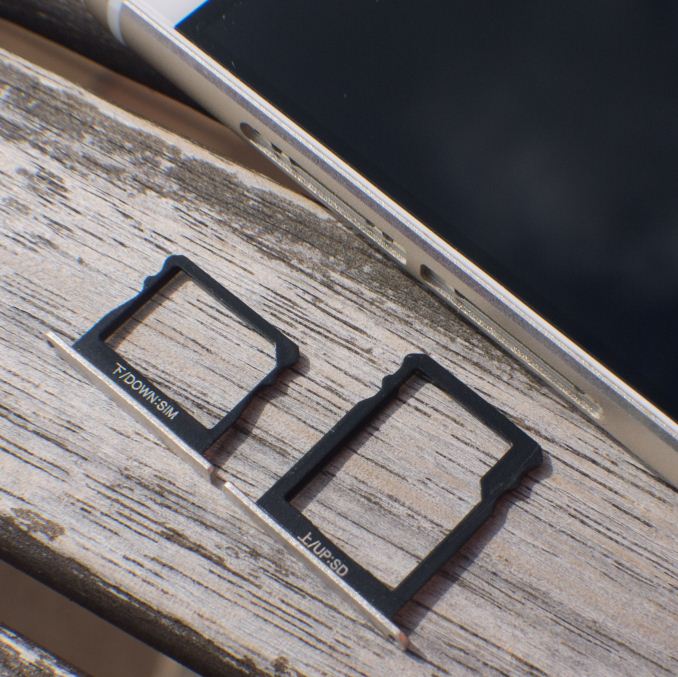 As opposed to the left side of the device which is barren of any feature, the right side holds the volume rocker and power button as well as the ejectable trays for the nanoSIM as well as nanoSIM/microSD combo. The volume rocker is very clicky and distinguishable from the power button, which not only has a characteristic texture on it but is also surrounded by an indent differentiating itself from the otherwise round sides. Speaking of the sides, the curvature makes for a very comfortable grip which is accentuated by bevels on the front and back.

On the top of the device we find the 3.5mm headphone jack and the top auxiliary microphone. The bottom is more interesting as the microUSB 2.0 port is flanked by two Torx screws and two symmetrical speaker grills. I tried dismantling the device by trying to remove the screws and lifting up the device's screen, but it seems that Huawei also employs additional adhesive to hold the metal shell and the screen together.

Huawei called the design a “single audio chamber speaker system”, but in practice the right grill is essentially just for aesthetics and only serves as a housing for the bottom microphone. Covering up the left grill will completely dampen the audio output of the device. Nevertheless, the P8 is still able to output very loud and clear audio with good depth. 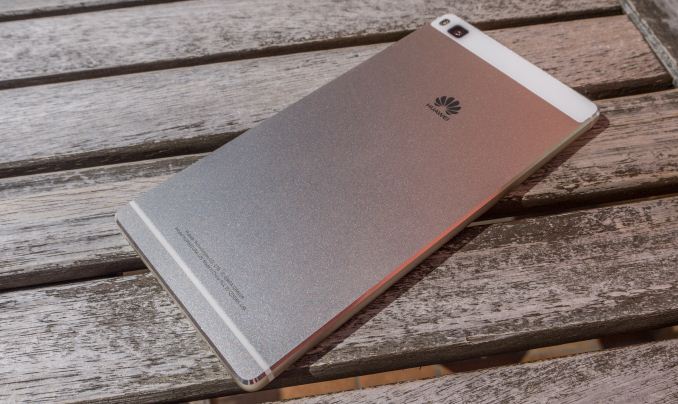 The back of the device is accentuated by the plastic injection mold lines (which serve as dielectric dividers for the device’s antennas) at the bottom of the phone, while the top part we see a glass piece serving both as the cover glass for the camera and design element as it continues for the whole width of the device, which comes in either white for the brighter coloured phone options or black for the darker variants.

Huawei was proud to show off the ability to keep the camera flush with the rest of the phone. It seems they even managed to have some leeway here as the camera module seems to be still 1.5mm underneath the glass.

In terms of build quality it seems the P8 is a solid phone. The only gripe I’ve had with it is that it seems to have some empty space underneath the back of the phone as if you try to squeeze it will flex inwards by up to 1mm. The phone’s ergonomics are good and it was a generally pleasant device to use.

The P8 is available in two variants at each price point: 499€ for either the 16GB Mystic Champagne or Prestige Gold versions, or 599€ for the 64GB Titanium Grey or Carbon Black variants which also come with the 200MHz higher CPU clocks.