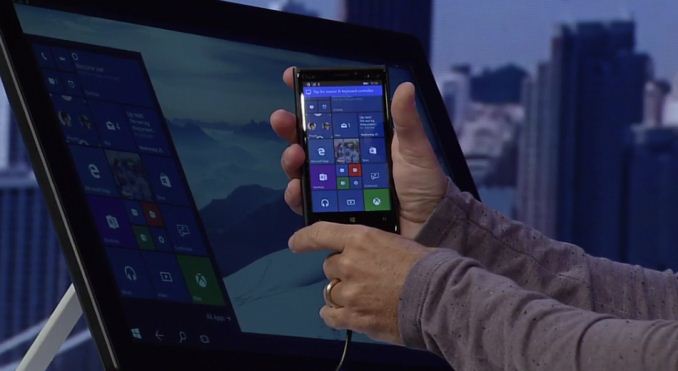 Today Microsoft revealed a number of new features relating to their various platforms at their BUILD developer conference. One of the most interesting features shown was the Continuum feature of Windows 10 phones. Microsoft has previously shown off the ability for tablets to connect to larger screens and input peripherals to act as a computer, and they have now shown those same abilities working on a smartphone. This is possible because applications developed for Windows 10 will be universal applications that can scale from your phone, to your computer, to your television.

During the keynote a Windows 10 smartphone was shown connected to a large display via HDMI, as well as to a Bluetooth keyboard and mouse. This allowed the phone to essentially act as though it were a Windows 10 computer, with applications like PowerPoint and Excel scaling to use the same layout that you would see when running them on a normal desktop computer. This type of dynamic behavior extends from interface changes to input paradigm changes as well. Devices may change their preferred input mode or interface to suit the peripherals that are or are not attached to a device.

Continuum looks like it will be a very interesting feature. Users will have to wait some time to get their hands on it though, as it won't be available in the preview release of Windows 10 that is scheduled to come out tomorrow. Microsoft has created a short video to explain a bit more about Continuum on Windows 10 phones and the potential use cases that they see for it, and I've embedded that video above.