I've talked a bit about the Exynos 5430 in my Note 4 Exynos review where I revealed some benchmark numbers from the Galaxy Alpha. The 5430 is a 4xA7, 4xA15 octa-core SoC that is running big.LITTLE in heterogeneous multi-processing mode on top of a GTS ("Global Task Scheduling") software implementation.

In the Meizu MX4 Pro we see the A7 cores clocked at a higher 1.5GHz, with the A15 running at up to 2.0GHz. I noticed that the CPU isn't allowed to scale above 1.8GHz unless certain boost mechanisms are activated, such as switching apps. Since Meizu hasn't divulged the source code for the MX4 Pro, I can't be too sure how this mechanism works. The effect is that most benchmarks should actually have the CPU running at a 1.8GHz limit instead of 2.0GHz. Memory is limited to LPDDR3-1650 speeds, providing a theoretical 13.2GB/s bandwidth to the SoC. 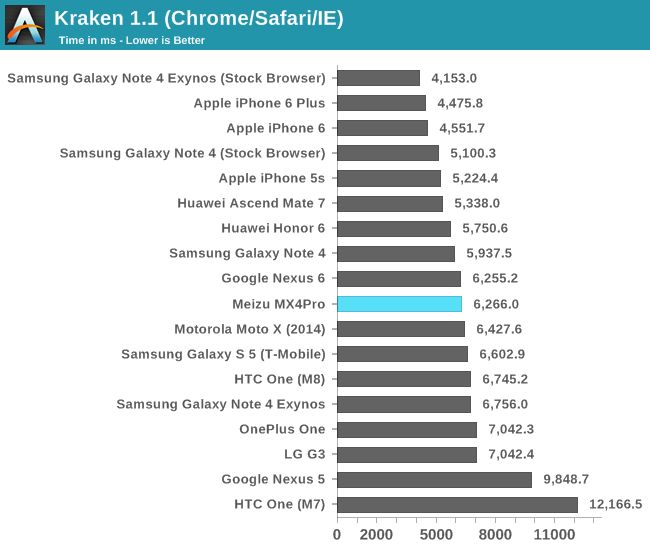 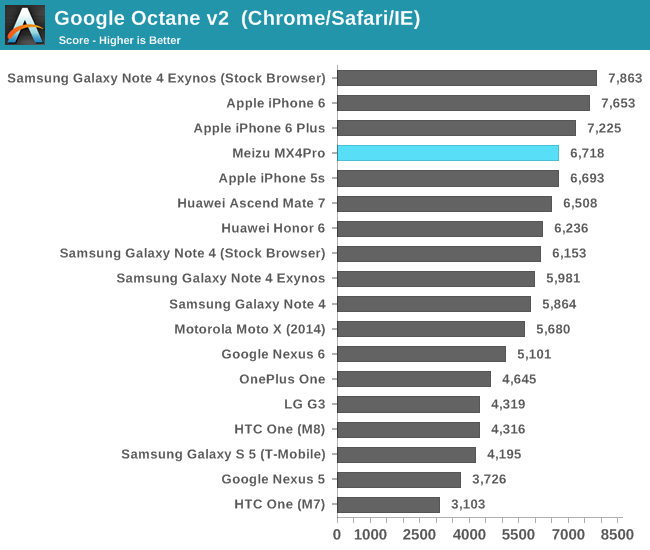 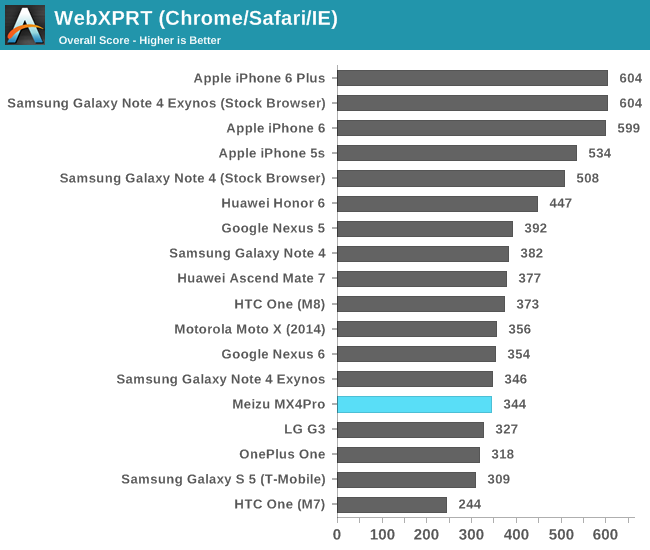 We've dropped SunSpider from our 2015 test suite as it was too sensitive as a micro-benchmark to browser optimizations and JavaScript engine compiler targets. Turning back to Kraken we see that the MX4 Pro doesn't perform that well, ending up in the middle of our latest flagship devices. The Alpha was able to achieve 4973ms on the same SoC, pointing to worse software optimization. Octane, being created by Google, achieves better scores in Chrome.

I've mentioned in the software section that the stock browser underperforms Chrome in the benchmarks. It's a pity because we've seen from the Exynos Note 4 review just how much performance can be squeezed out of the stock browser if properly optimized for the SoC-specific hardware. The 5430 should perform much better in native benchmarks. 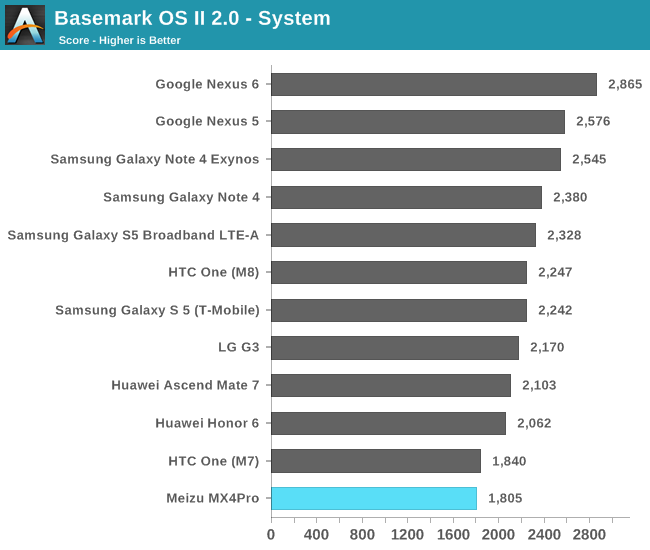 Starting with BaseMark OS II's system test, we see that the MX4 Pro scores quite low. The Galaxy Alpha with the same SoC scores 1958 points, about 10% higher. With both Lollipop Nexus devices topping this benchmark, it's clear that software optimizations bring lots of advantage to a device's ranking in this test. 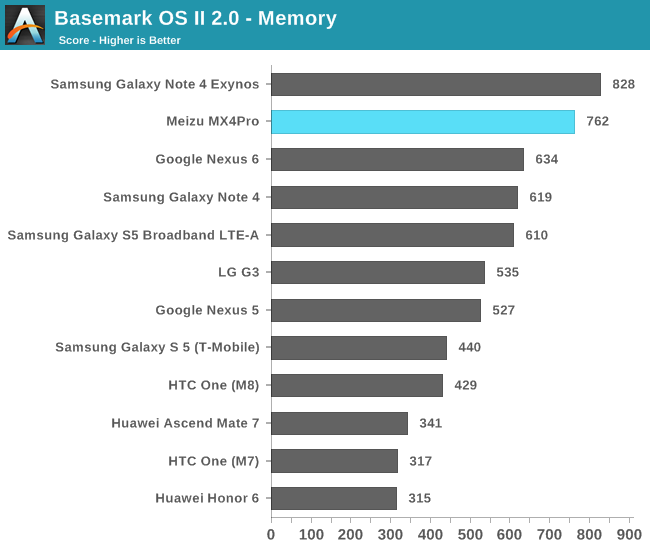 The Meizu performs excellently in the memory test, where the NAND is stressed and throughput is tested in collection of memory benchmarks. Although the Meizu does not possess the second-best eMMC module of the benchmarked phones, it looks again that Samsung's controller for some reason outperforms the competition by a sizeable margin. 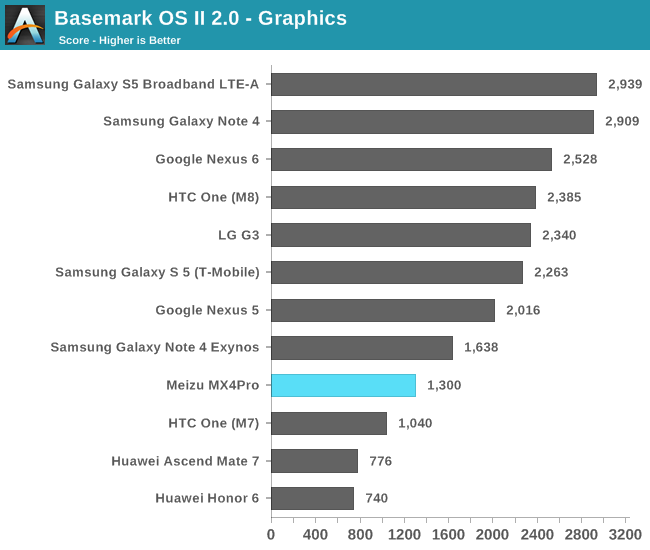 The Mali T628MP6 doesn't manage to keep up with the Qualcomm GPUs. We're again seeing it perform badly, consistent with the other Mali devices in this listing. 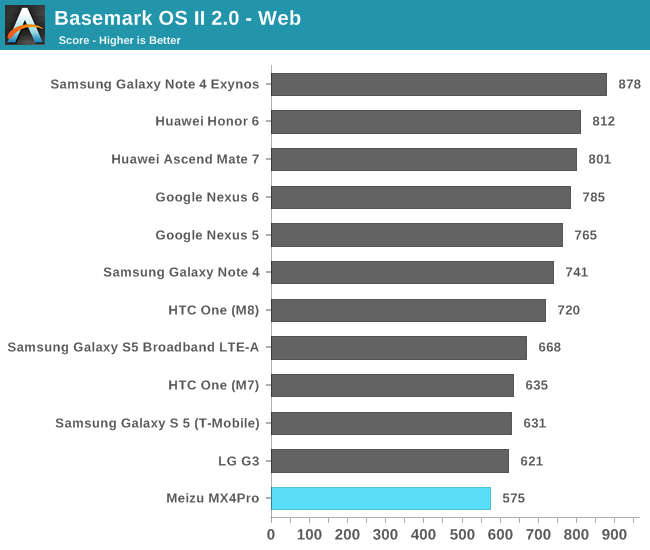 Lastly, the web test also puts the MX4 Pro last among the current generation flagships. The Alpha managed to achieve a score of 812 in this test. I may be repeating myself here but the reason is obvious: software, software, software. 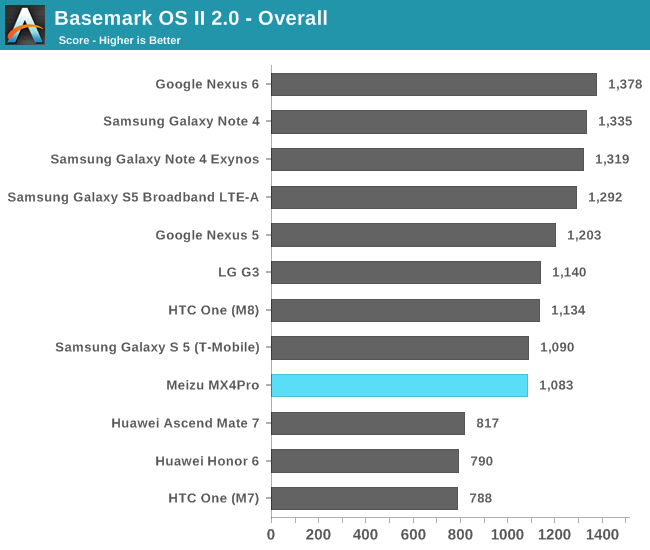 The overall BaseMark OS II score puts the MX4 Pro slightly under last generation's flagships such as the Galaxy S5, One M8, and the G3.

Moving over to PCMark, one of our newer additions to our mobile test suite, we're taking a look at real-world performance scenarios that one would encounter in daily apps and usage of a smartphone. These benchmarks are very OS sensitive and thus give a better impression of a device's real performance instead of synthetic CPU tests. 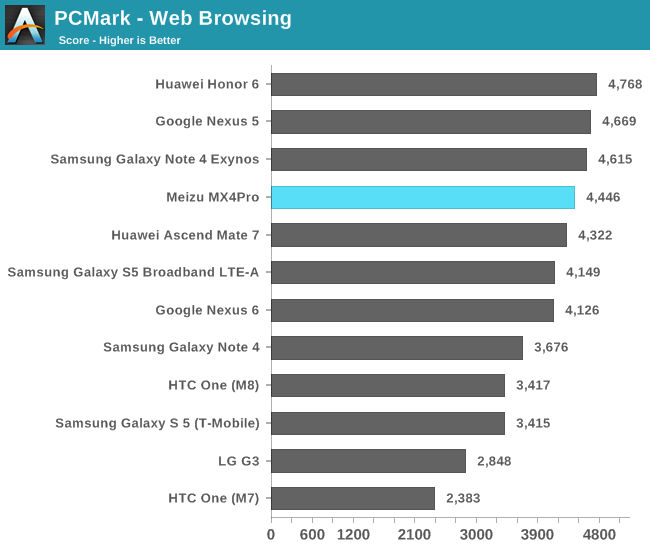 The web browsing test starts out as positive for the MX4 Pro, being able to reach the top performing group of devices on this benchmark. It's interesting to see how all ARM Cortex A15 and A57 devices are able to consistently outperform Qualcomm's Krait SoCs in this test. 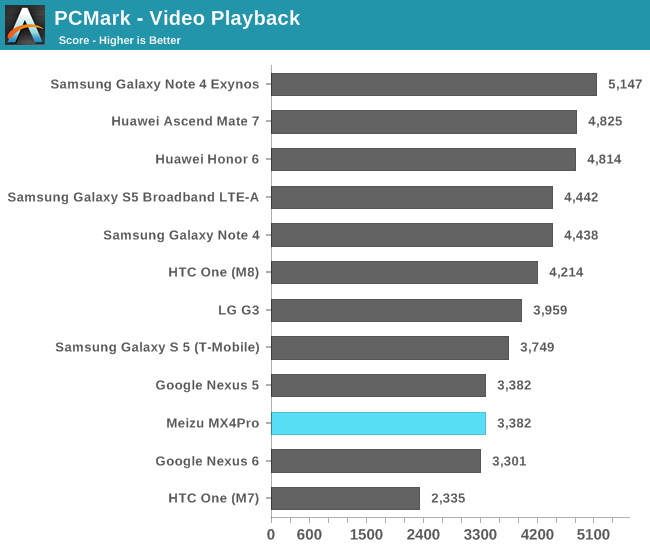 The video playback test uses the native Android MediaPlayer API to play back a 1080p H.264 baseline 4.0 video, with a variable target bit rate of 4.5Mbps at 30 FPS. What is measured here is the time needed to open the video samples, their average frame-rates, and the seek time when skipping through the videos.

The Meizu isn't performing too well in the video playback test. We saw how the Note 4 Exynos was able to outperform its Qualcomm counterpart with help of better eMMC controller performance and a good hardware decoder, but that doesn't seem to translate to the MX4 Pro in this test. 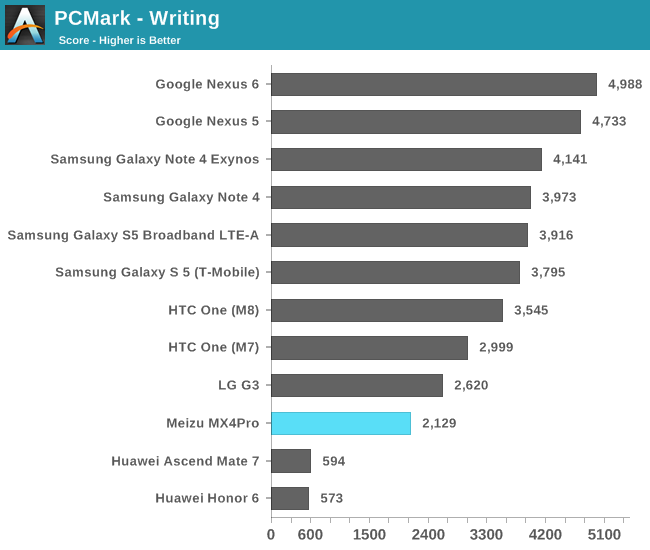 The writing test measures performance when manipulating a native EditText view. It loads, uncompresses, and pastes two documents together into what results in a 200k character piece of text. This is then compressed into a ZIP and saved. Further text manipulation is done and the API overhead and performance is measured.

It seems we're again hitting a software bottleneck here as the MX4 Pro behaves badly compared to our current flagship devices. Only Huawei's phones (which seem to be clearly broken in this benchmark) perform worse. 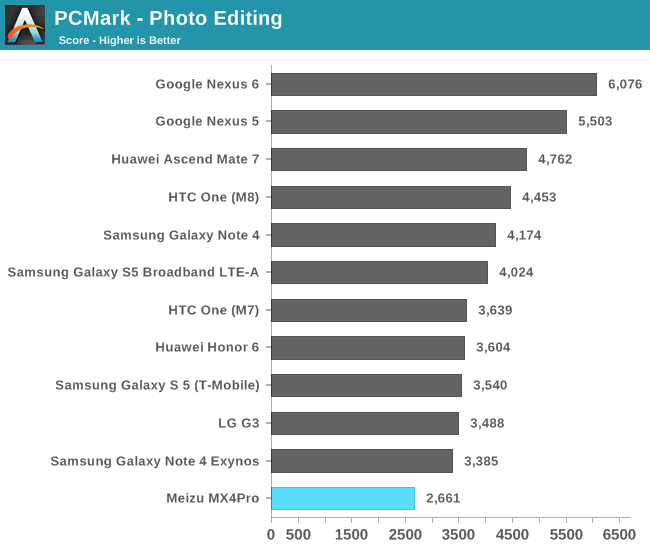 The photo editing test is a mix between API performance and both GPU and CPU performance. Image effects are applied via both the native effect API in Android, and also a RenderScript that tests heterogeneous processor performance (GPU and CPU). Additionally a Java library is used to test Java performance through processing filters that are computed on the CPU.

Here the MX4 Pro manages to come in last yet again. Did I mention software optimizations yet? 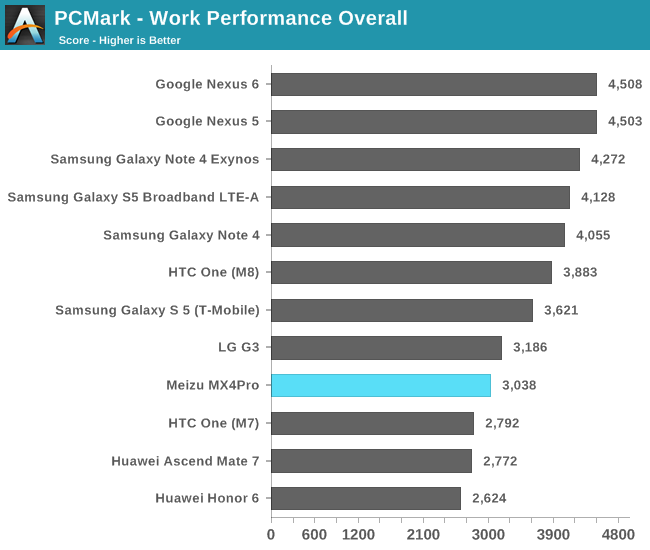 The overall work performance score puts the MX4 Pro just slightly higher than the Huawei counterparts that employ a similar SoC, and it's able to just outperform the last generation of SoC devices such as the Snapdragon 600 found in the One M7. What I've noticed while using the phone is that these numbers roughly correlate with what I've seen in real-world performance. Sometimes applications take a fraction of a second longer to open, or an app takes just a little bit longer to load a screen. I would be extremely curious how the MX4 Pro would perform on ART and Lollipop, because it's clear that there's a general lack of hardware optimizations on the stock ROM. Here's hoping that Meizu is listening and future software updates are able to improve performance.

The Meizu MX4 Pro employs a SanDisk manufactured eMMC solution, the SDW32G with NAND storage manufactured by Toshiba. This should be an eMMC5.0 solution supporting HS200-DDR operation. Indeed when looking at the maximum sequential read and write scores in our AndroBench storage benchmarks, we see that the solution doesn't perform badly at all and is able to keep up with the current flagship generation, even outperforming some such as the Galaxy S5 or the One M8. 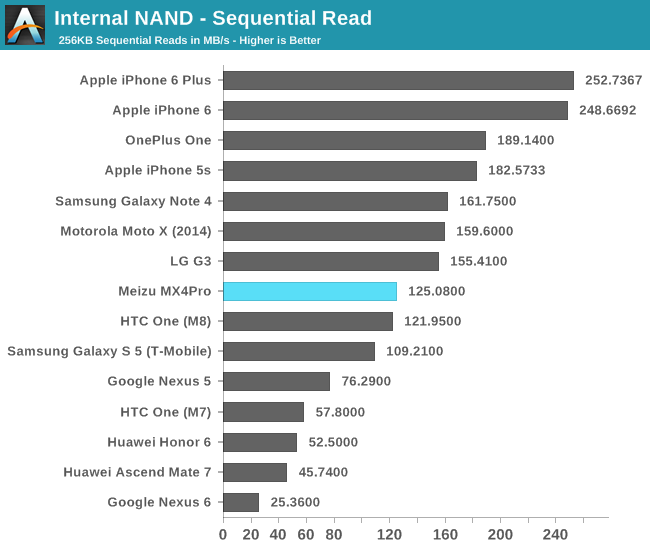 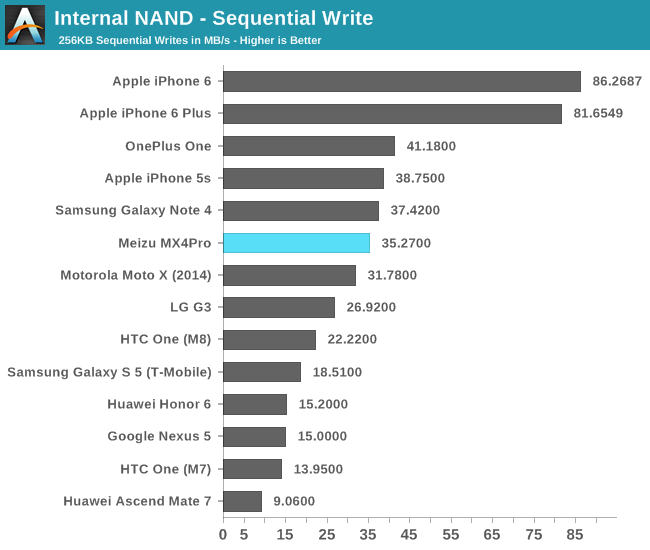 Switching over to the random read test, we see the MX4 Pro falling behind compared to the more expensive high-end competition. 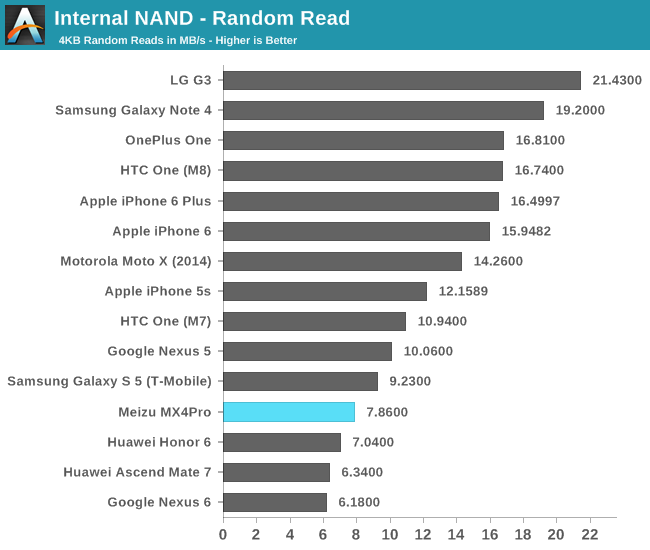 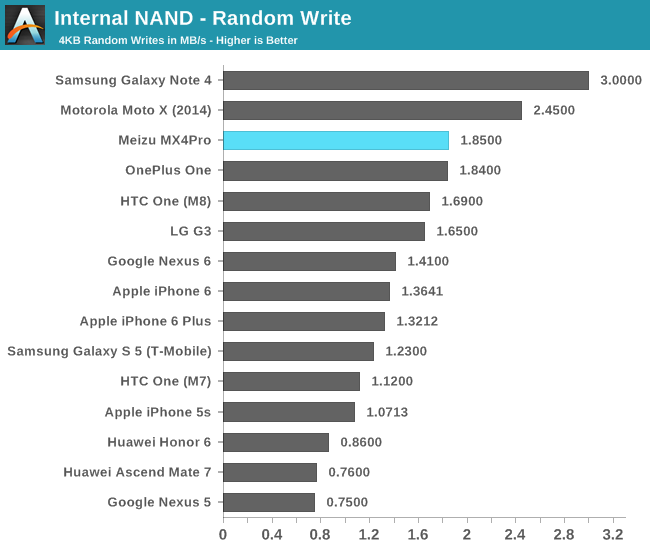 The random write test performs better for the SanDisk eMMC as it lands our 3rd best score. Overall I think Meizu employed a performant and competitive NAND solution on the MX4 Pro, a surprising conclusion given the bad experience we've had until now with Chinese phones and the poor showing of some other China-focused devices.