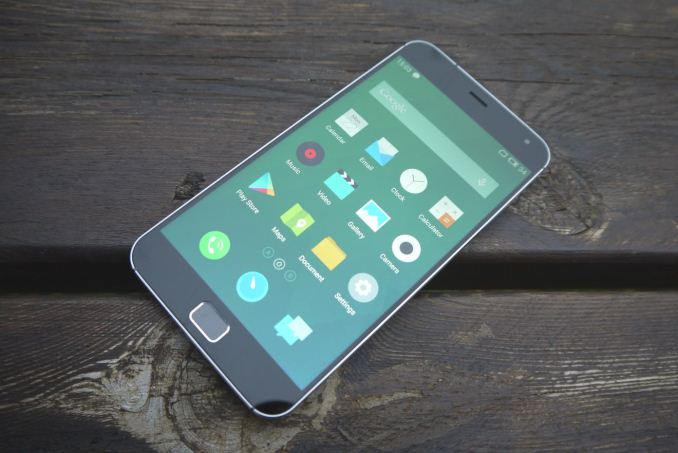 Meizu is a company that started out as a music player manufacturer in the mid-2000's and jumped onto the smartphone revolution in early 2008. While traditionally the company has targeted the Chinese market and its current phones are still prioritizing the Asian country, we're seeing increasingly strong offerings that people may want to consider in other international markets such as Europe.

The MX4 Pro marks a change in Meizu's release cadence and flagship line-up. Usually we've seen the company release only one flagship per year, and it seemed that the MX4 was that flagship this year. However, it took Meizu only two months to announce the slightly larger and higher-end MX4 Pro in November. Both phones are incredibly similar in design but employ very different innards, as Meizu goes back to their traditional choice of a Samsung-manufactured SoC and adopts a higher resolution 1536p screen over the 1156p screen in the MX4.

Before going into the design, let's go over the full specifications of the unit:

The MX4 Pro uses a Samsung designed and manufactured Exynos 5430 SoC. We've touched on this SoC in our review of the Note 4 Exynos, although I used the Galaxy Alpha as the comparison device in that article. This variant has 4x A7 little cores coming in at a higher 1.5GHz this time around, along with 4x Cortex A15 clocked at 2.0GHz. On the GPU side we have a Mali T628MP6 at 600MHz, same as the Galaxy Alpha. For RAM, we find 3GB of LPDDR3-1650 to enable memory management and multi-tasking capabilities.

The device comes in either 16GB or 32GB NAND variants, with no option for expandable storage as there is a lack of microSD slot. I was surprised to learn of this and am disappointed to see the omission of an added storage option, especially when considering the device has a removable back cover that could have easily offered the space for it.

Cell network connectivity is provided by sort of a new-comer in the high-end flagship segment, Marvell. The ARMADA Mobile PXA1802 LTE modem powers the MX4 Pro offering multi-band LTE capability. Unfortunately the current models of the MX4 Pro, including this review unit, only have a limited selection of FDD bands needed in western markets. European / South American and some Asian users might have luck as B3 and B7 (1800 and 2600MHz) are still relatively widely used in different countries. For European users especially it lacks the crucial 800 B20 EUDD band that provides best reception and power usage. For North American users, LTE is sadly completely out of the question as it doesn't provide any band compatible with the local providers and connectivity is limited to HSDPA on GSM carriers.

The screen is a sizeable 5.46" JDI "NEGA" negative LCD unit with a resolution of 2560x1536. The screen comes in a slightly wider 15:9 aspect ratio, employing 96 more pixels in the width of the display compared to the usual 1440p devices we're getting accustomed to. The "negative" LCD moniker means that the crystals are in their rested default state non-permeable to light, meaning blacks should in theory consume less power compared to typical LCD screens and increase contrast.

The cameras are powered by a Sony IMX220 20.7MP sensor for the main rear unit, and an OmniVision OV5693 sensor sporting 5MP for the front facing unit. The whole device is powered by an embedded 3350mAh 3.8V or 12.73Wh battery that should provide quite good battery life for a device of this size. 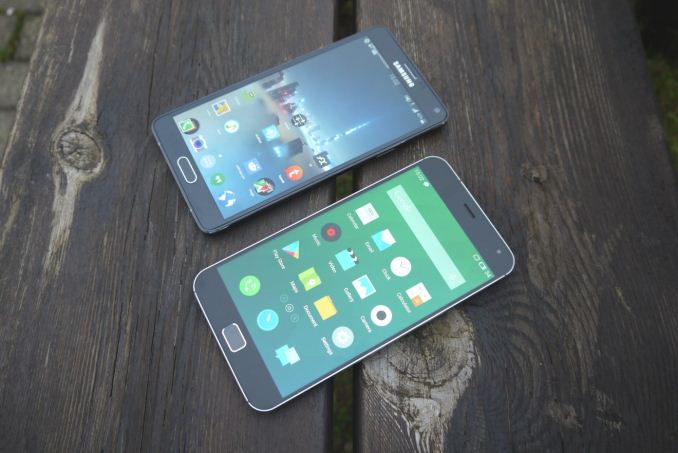 In terms of design, the Meizu surprised me. Although its dimensions of (H) 150.1 x (W) 77.0 x (D) 9.0 mm put it only 1.6mm less wide than the Galaxy Note 4 for example, the ergonomics of the device far surpass the Note. The rounded edges and corners of the device make for an excellent grip in the hand, making you forget that the device remains quite thick at 9mm. The 153g weight is also very good for a device of its size and provides great balance when holding it, without it getting too tiring to hold due to its weight, an issue I noticed with heftier devices such as the Mate 7 or Note 4.

Minimal side-bezels also provide a great screen to device-footprint ratio, as the MX4 Pro has the smallest side bezels I've seen on a device. The front design reminds strongly of earlier iPhones and it's pretty evident that Meizu is trying to capture a bit of the Apple design language here. Although the front isn't very original, the sides and back are a unique design.

The device's sides are made of solid aluminum which gives the device a premium feel and cold touch sensation. The rounded sides, as mentioned, provide a good radius in their slope that makes it very comfortable to hold as it transitions towards the plastic back-cover. What's eye-catching are several plastic inlets throughout the edges of the device, similar to what we've seen in Samsung's Galaxy Alpha and Galaxy Note 4. These are highly likely to enable the device to have better signal reception and to avoid the metal rim acting as a Faraday cage.

The bottom front face is where we find an addition to Meizu's traditional button layout, instead of a capacitive button we have a mechanical home button with integrated fingerprint sensor. The home button can be used to turn the device on by tapping it, or turn it off by holding it for 1.5s. Additionally the fingerprint scanner can also function as a capacitive key that can be assigned a variety of functions. I've found it very natural to have it used as a capacitive back key for navigation as it frees up screen estate from the on-screen navigation bar. I'll revisit how navigation on the MX4 Pro works in just a bit. 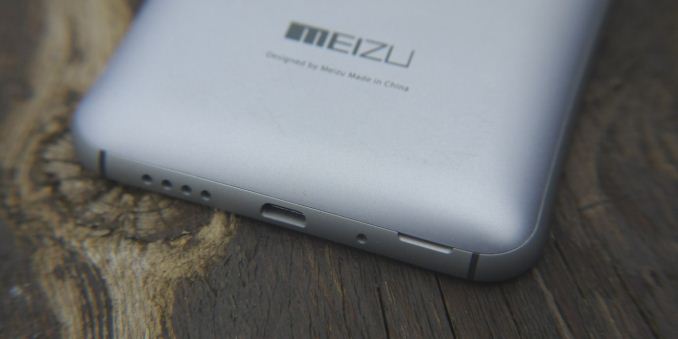 On the bottom side of the device we find the device's main speaker pointing downwards and on the right side of the phone. The speaker is very loud and clear, much better than what we find on the Note 4 but still not near the range and depth of what can be heard on the Mate 7 or HTC BoomSound devices. On the bottom left side we have the device's main microphone with the microUSB port in the middle. I've found it disconcerting that the microUSB port is inverted compared to nearly every other device I've seen, which made me pause for a few seconds the first time I tried to attach a cable for charging before I realized what I was doing wrong. However, anyone used to the Nexus 5 or HTC phones won't have any issues with the microUSB orientation. 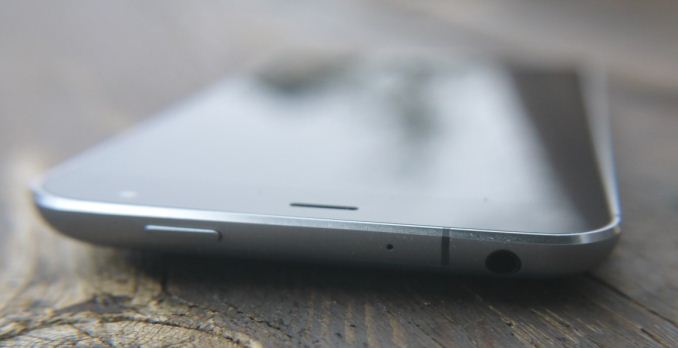 On the top of the device we have a secondary microphone for stereo recording and noise cancellation, flanked by the power button and the 3.5mm headphone jack. Many people would critique the top location of the power button, but given the MX4 Pro's ability to turn the screen on and off via the home button it works relatively well as it provides an opposite location for access to the functionality when holding the device in different ways.

While most of the design is quite good, I noticed that the earpiece isn't well-designed. The front glass sits at a higher level than the earpiece, creating a little groove that is a huge dust magnet. In my experience I found the earpiece full of dust and debris in just a few days of usage. The fact that the inlay has sharp edges because of the front glass doesn't help either when trying to clean it.

The main camera is found on the upper back middle of the phone, right over a dual-tone flash system similar to what we find in many recent flagship smartphones. The camera sticks out by a millimeter and is encased in a metal ring and protected by sapphire glass. 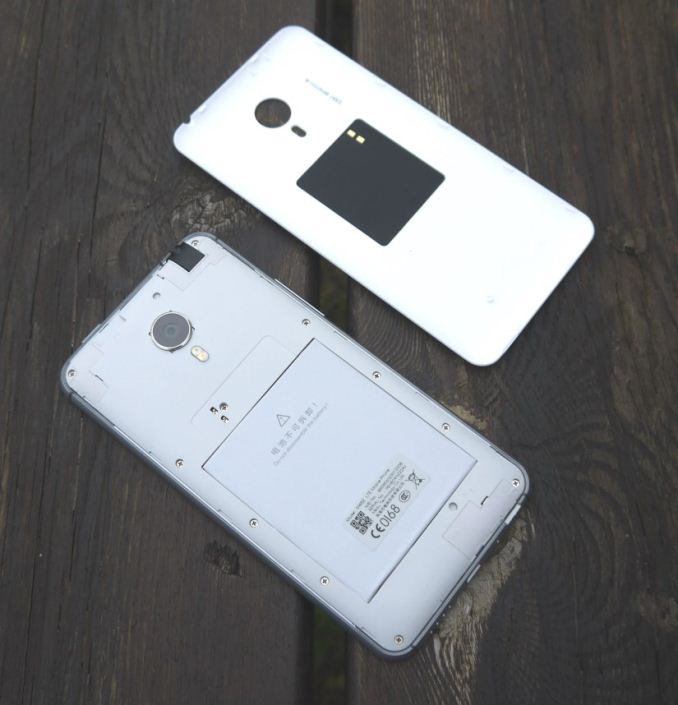 As mentioned the back cover of the device is removable, although this does nothing in terms of functionality as it only provides access to the microSIM slot at the top of the device. The clip system is identical to what Samsung employs in their devices and offers for a solid attachment to the phone. We find the NFC antenna on the back-cover that connects to the phone via spring-contacts. It's interesting to see the actual battery in full view, but it's impossible to remove or disconnect it without further dismantling of the device. Although the battery is not removable, it certainly is still relatively easily replaceable if Meizu provides new battery packs later in the device's lifetime.