Whenever we talk about processors and silicon, one of the key major points is efficiency and performance per watt. One issue to consider is that while that new CPU uses 10W less, it makes little difference if the motherboard or other components eats up the difference. To that end, MSI previewed their ECO range at Computex, promising a power reduction over the normal but primarily aimed at various business customers with a green and white color scheme. We got the B85M ECO and a few low powered Haswell CPUs in to test the claims.

Saving energy is a topic to which many column inches are dedicated every month, let alone the incredible amount of money to fund more efficient methods of energy generation, travel or even LEDs. Not only does the product have to be more efficient, but the energy used to create it in the first place should not increase either, unless it acts as a stepping stone to bigger things (insert various arguments relating to Prius batteries vs building the electric car economy to drive costs down and research investment up). To a large extent, the ends can justify the means. But while cars and LEDs are big topics in most discussions, data centers are still one of the world’s biggest suckers of juice, and that juice comes from various methods of energy production. The heart of a data center is the CPU or PCI co-processor, but when you are dealing with 100,000 systems, every milliwatt in DRAM and motherboard design counts as well.

The B85M ECO and MSI’s ECO range are aimed at both the data center and the office. I cannot find the last time we reviewed a B series motherboard at AnandTech (in my tenure we did some H67 back in 2011, and a mini-ITX H series more recently), but the B85 chipset is the current Haswell/Broadwell chipset for businesses that integrate features such as vPro and Intel’s Small Business Advantage platform while retaining full SATA 6 Gbps and USB 3.0 functionality. Even for small businesses, every watt over every system in a tower block can make a difference, and offers the company a platform to promote green practices. 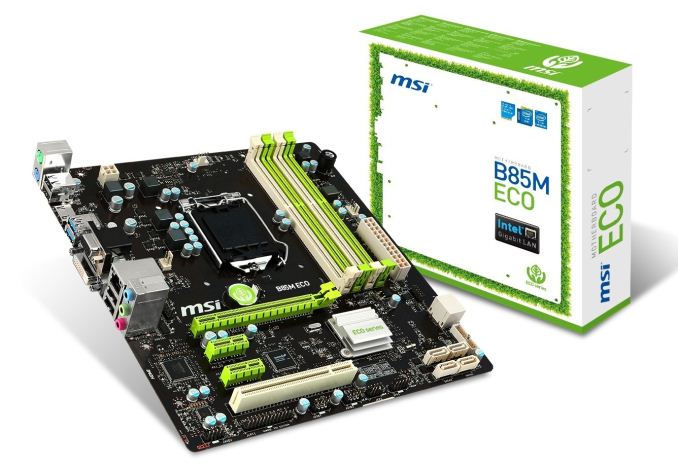 The claim MSI’s ECO range is making is a 40% reduction in power consumption while retaining 100% performance when compared to other boards. This is meant to be achieved by using fewer or more efficient components at every stage of the design, as well as software and BIOS options to disable unused ports or headers when not in use. The end result is that the boards cost ~20% more than usual but are TÜV certified for energy efficiency and long term stability. Like other energy efficiency investments, it takes time to recoup those 20% costs but for most use cases one would hope that occurs within a 3-5 year use cycle. We put some numbers to those claims to test for ourselves. To add to the mix, MSI’s standard 3 year warranty can be bolstered with their Customer Service Model, allowing businesses to order replacements and repairs with a quicker dispatch cycle.

Another poignant point to add was as a result of our initial coverage of the ECO range at Computex. At the time MSI was experimenting with different colors for the PCB and slots, going with a green and white theme. Unfortunately it looks like the green PCB has been dropped for a dark brown one on the B85M model at least, but the green and white theme still gets the idea across despite the main use scenario for the ECO range will be generic boxes under the desk.

Aside from our discussion about the power consumption differences later on in the review, the MSI B85M ECO felt like a good point if you wanted to just get something up and go. With it being a B85 model it means no overclocking and no MultiCore Turbo, but it still ran all our normal benchmarks a treat on the i7-4770K at stock and our range of low powered S/T CPUs.

In terms of hardware, full two DIMM per channel support might not always make it onto a motherboard at this price but the B85M ECO will accept 32GB quite easily. The only extra controller to speak of is an ASMedia PCIe to PCI bridge using one of the chipset lanes to make a PCI slot, but the PCIe x16 is fully Gen 3.0. In the interests of keeping costs down (or perhaps because it is more efficient), we get an ALC887 audio codec and Realtek NIC rather than anything further up the stack. As this board is aimed at the business crowd, PS/2 is supported along with VGA, DVI-D and HDMI. There is an LPT board at the bottom for good measure, and a TPM between the PCIe layout.

Performance wise, when we set up the system similar to our other LGA1150 motherboards, the system acted like an i7-4770K without MultiCore Turbo as expected, but we did get some interesting system results. DPC Latency was excellent at 53 microseconds, and POST times hovered around 12 seconds. Audio came in as expected, as did USB speeds. Ultimately the B85M ECO comes in at average performance but with a few good parts.

Software and BIOS are green themed to go along with the ECO mentality. Without overclocking options the BIOS seems a bit thin, but both the BIOS and the OS can perform the ECO savings. The BIOS gets use of MSI’s updated fan control system which is good to see, as well as Board Explorer. The OS also gets MSI’s software jewel, Live Update.

Having my head buried in higher priced products for several years means when dealing with a low cost (under $100) motherboard like the B85M ECO it brings you back down to earth with a bump. Several things immediately stuck out when I took this motherboard out: the lack of power phases or a heatsink, the lack of components on the board itself, and the color scheme. 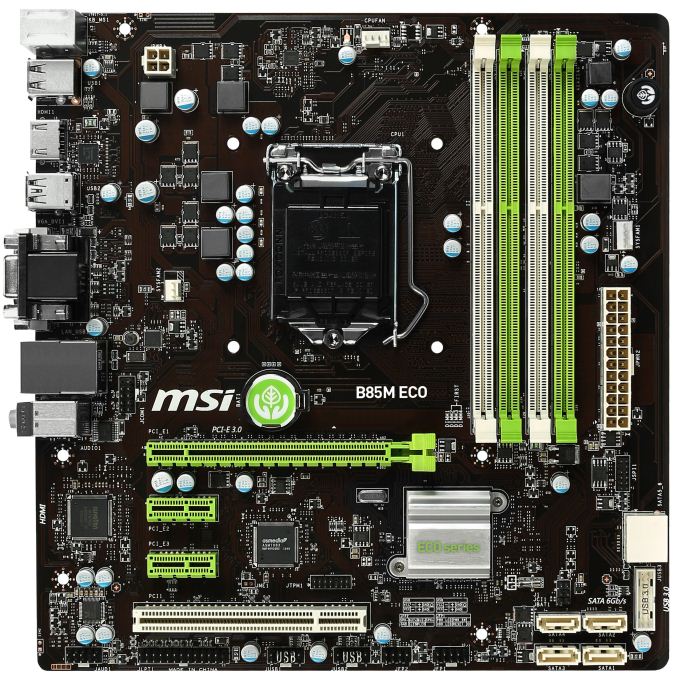 Technically Intel only rates its CPUs for a 1-3 phase design. Anything above that requires provisioning or multiplexing in order to let overclocked extreme CPUs go as far as they do. Because B85 is a locked down chipset aimed at low power CPUs, sticking within that 1-3 phase guideline allows MSI to keep costs down. As the motherboard can be bound for office use, basic airflow provided by a stock cooler should be sufficient for cooling that area as well. With the amount of free space around the socket, it would seem any air cooler should fit given appropriately sized memory.

The motherboard has three fan headers – one CPU 4-pin above the socket, one SYS 4-pin next to the 24-pin ATX power connector and a final 3-pin to the left of the socket. A three fan header arrangement is fairly common for the cheaper motherboards and should be suitable for most use cases, although perhaps an extra one might be handy. 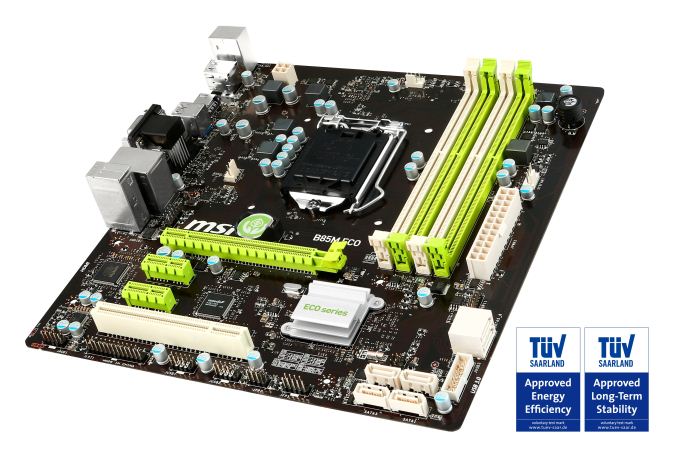 On the top right of the motherboard is an ECO switch, replacing the OC Genie switch we see on MSI’s channel motherboard line. This implements the ECO mode, which is explained best when we look at the software later in the review. On the bottom right we have the four SATA 6 Gbps ports and two SATA 3 Gbps ports from the PCH, although the configuration is awkward. There are two SATA 3 Gbos ports at right angles to the board as per normal, and the other four SATA 6 Gbps directly come out of the motherboard. These four are angled in such a way that users with locking cables are going to have a tough time removing them, as the locking latches will be facing each other. This is an avoidable mishap. In between all these SATA ports is a USB 3.0 header from the PCH. 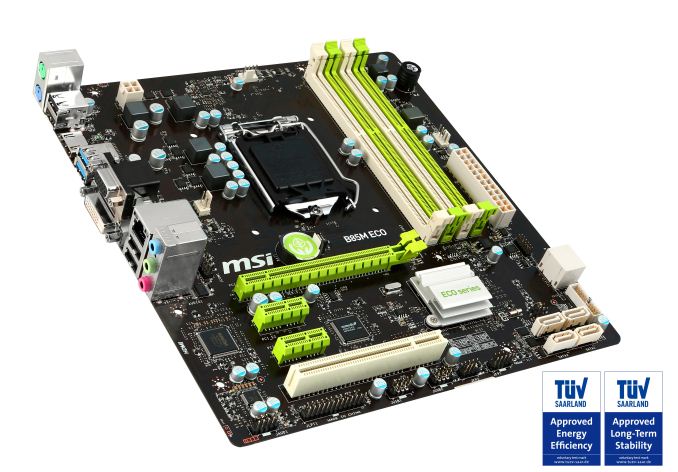 Along the bottom of the board we get the front audio panel header (from the Realtek ALC887), an LPT header, two USB 2.0 headers and the front panel headers. Above these are the PCIe slots, with a single PCIe 3.0 x16 followed by two PCIe 2.0 x1 slots. The bottom PCI slot is provided by an ASMedia PCIe to PCI bridge chip, and just above this is a TPM header.

The rear panel uses separate mouse and keyboard PS/2 ports, important in case an office has not upgraded to USB yet (one wonders how much gunk would be in the old PS/2 models after a decade of lunch-at-desk). If they have upgraded, four USB 2.0 ports are provided alongside two USB 3.0 ports. VGA, DVI-D and HDMI are the supported video outputs, with audio jacks and an Intel network port to finish it off. Behind the rear IO is a COM header as well.

On the high end motherboards, manufacturers struggle to find enough PCIe 2.0 lanes from the PCH or enough FlexIO space to fit everything on board. Back down at $100, we end up not using some of them at all. Part of this, especially for the B85M ECO, will be for power consumption. Some of the FlexIO ports are muxed between two possibilities, so by removing those out of the equation it might result in lower power consumption. I have no way to test this hypothesis, but it would certainly be a question for the motherboard designers.