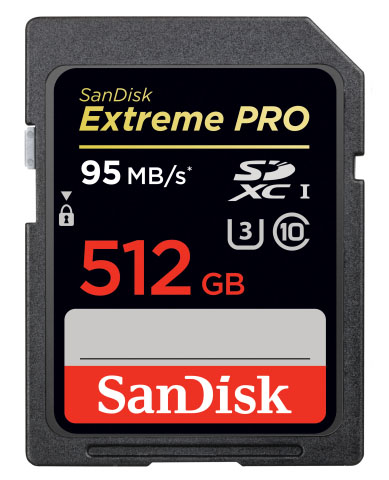 While we don't usually cover SD cards, SanDisk's announcement of 512GB Extreme PRO SD card caught my eye today. There are currently only a couple of 256GB SD cards available and most OEMs have not been able to go above 128GB, so the Extreme PRO is the highest capacity SD card in the world, which really speaks for SanDisk's NAND and packaging expertise.

The Extreme PRO comes in SDXC format and utilizes UHS-I interface, which is good for up to 104MB/s. As you can see in the table above, the Extreme PRO comes very close to saturating the interface and it carries UHS Speed Class 3 rating, meaning that it is suitable for capturing 4K video. The largest market for the new Extreme PRO SD cards is obviously video professionals because as we transition to 4K video, the need for storage increases substantially, which in turn opens market for larger SD cards.

While SanDisk didn't release any details of the internals, it's pretty safe to assume that the 512GB Extreme PRO consists of 32 x 128Gbit (16GB) dies. The photo above is from SanDisk's 2014 Investor Day presentation where the company claimed that it has the technology for a 32-die SDXC card and with the Extreme PRO the technology has made it into the retail. Since SanDisk/Toshiba doesn't have a 256Gbit NAND die (nobody has one in mass production yet), the only way to achieve 512GB is through a 32-die stack. SanDisk hasn't specified whether the NAND is MLC or TLC, but given that it is a high-end product I'm guessing it is MLC based.

All capacities are available now and the MSRP for the 512GB model is $800, which is certainly high since 512GB SSDs retail for close to $200. However, the Extreme PRO is the only SD card that is available in such a high capacity, so I would say the premium is justified. Stacking more dies on top of each other will always have a negative impact on yield as the wires have to be longer and there are more wires to connect, so the room for errors increases and thus the manufacturing cost goes up as well.