Readers of our motherboard review section will have noted the trend in modern motherboards to implement a form of MultiCore Enhancement / Acceleration / Turbo (read our report here) on their motherboards. This does several things, including better benchmark results at stock settings (not entirely needed if overclocking is an end-user goal) at the expense of heat and temperature. It also gives in essence an automatic overclock which may be against what the user wants. Our testing methodology is ‘out-of-the-box’, with the latest public BIOS installed and XMP enabled, and thus subject to the whims of this feature. It is ultimately up to the motherboard manufacturer to take this risk – and manufacturers taking risks in the setup is something they do on every product (think C-state settings, USB priority, DPC Latency / monitoring priority, memory subtimings at JEDEC). Processor speed change is part of that risk, and ultimately if no overclocking is planned, some motherboards will affect how fast that shiny new processor goes and can be an important factor in the system build.

3DPM is a self-penned benchmark, taking basic 3D movement algorithms used in Brownian Motion simulations and testing them for speed. High floating point performance, MHz and IPC wins in the single thread version, whereas the multithread version has to handle the threads and loves more cores. 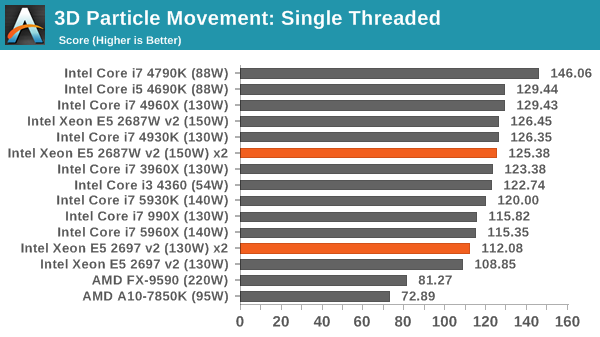 The single threaded test should be limited by the linear code, and we see in both dual CPU configurations it performs similarly to the single CPU result.

As the 3DPM algorithm involves no core-to-core data transfer, the 2P system can show its legs.  Here the faster eight-core beats the slower 12-core. 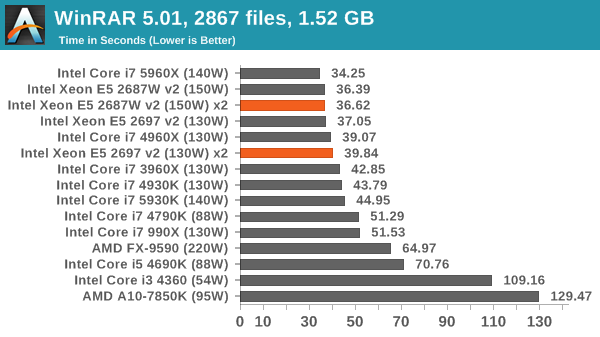 WinRAR can take advantage of many threads in a system, however a 2P system presents some difficulty in managing that data. WinRAR also likes fast memory, and so as a result the single eight core 5960X can get a better result than any of our 2P configurations.

Similarly to WinRAR, the FastStone test is updated for 2014 to the latest version. FastStone is the program I use to perform quick or bulk actions on images, such as resizing, adjusting for color and cropping. In our test we take a series of 170 images in various sizes and formats and convert them all into 640x480 .gif files, maintaining the aspect ratio. FastStone does not use multithreading for this test, and thus single threaded performance is often the winner. 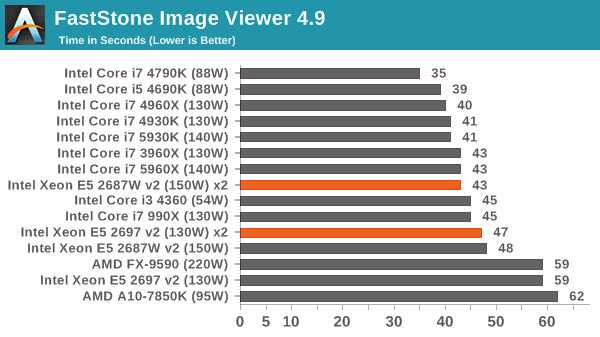 Handbrake is a media conversion tool that was initially designed to help DVD ISOs and Video CDs into more common video formats. The principle today is still the same, primarily as an output for H.264 + AAC/MP3 audio within an MKV container. In our test we use two videos: a 640x266 2h20 film rip and a double UHD 10 minute animation short. Results are given in frames per second. 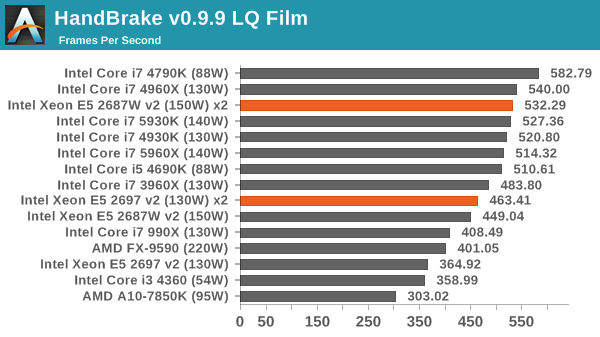 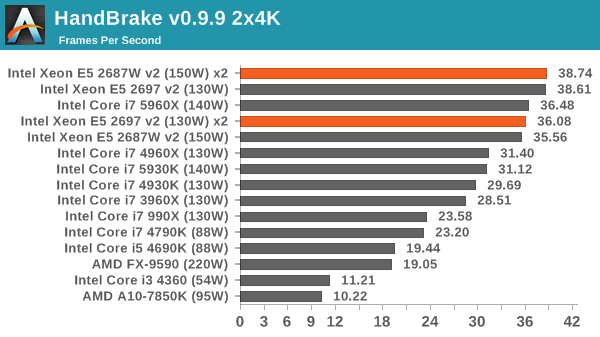 One would imagine that Handbrake could take advantage of all the extra cores on hand. For the LQ film, this is true at least for the faster frequency E5-2687W v2 model, however in 4K transcoding the data transfer between the CPUs becomes a bottleneck over raw CPU performance.

The Persistence of Vision RayTracer, or PovRay, is a freeware package for as the name suggests, ray tracing. It is a pure renderer, rather than modeling software, but the latest beta version contains a handy benchmark for stressing all processing threads on a platform. We have been using this test in motherboard reviews to test memory stability at various CPU speeds to good effect – if it passes the test, the IMC in the CPU is stable for a given CPU speed. As a CPU test, it runs for approximately 2-3 minutes on high end platforms. 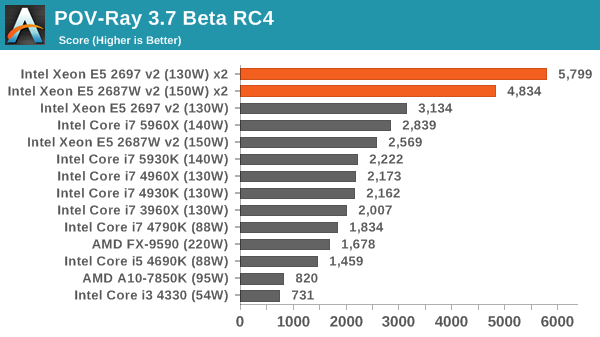 POV-Ray indicates more of what a 2P system should show: raw power.  Here cores win out over frequency.

As an open source compression tool, 7-Zip is a popular tool for making sets of files easier to handle and transfer. The software offers up its own benchmark, to which we report the result. 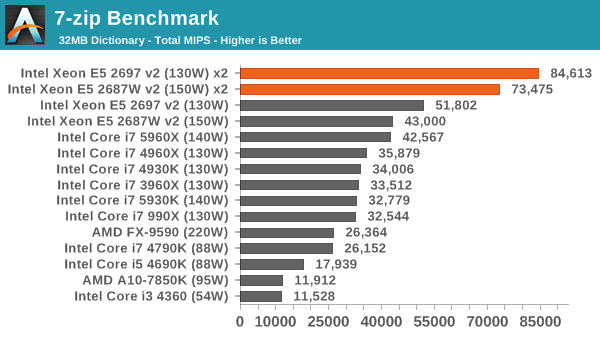