Power consumption was tested on the system while in a single MSI GTX 770 Lightning GPU configuration with a wall meter connected to the OCZ 1250W power supply. This power supply is Gold rated, and as I am in the UK on a 230-240 V supply, leads to ~75% efficiency > 50W, and 90%+ efficiency at 250W, suitable for both idle and multi-GPU loading. This method of power reading allows us to compare the power management of the UEFI and the board to supply components with power under load, and includes typical PSU losses due to efficiency. These are the real world values that consumers may expect from a typical system (minus the monitor) using this motherboard.

While this method for power measurement may not be ideal, and you feel these numbers are not representative due to the high wattage power supply being used (we use the same PSU to remain consistent over a series of reviews, and the fact that some boards on our test bed get tested with three or four high powered GPUs), the important point to take away is the relationship between the numbers. These boards are all under the same conditions, and thus the differences between them should be easy to spot. 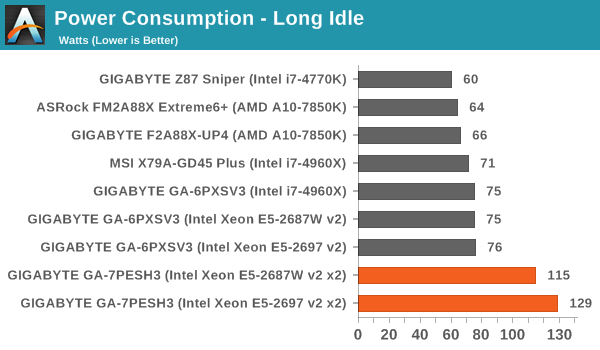 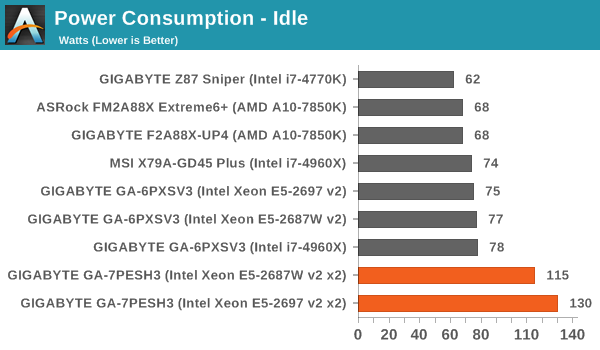 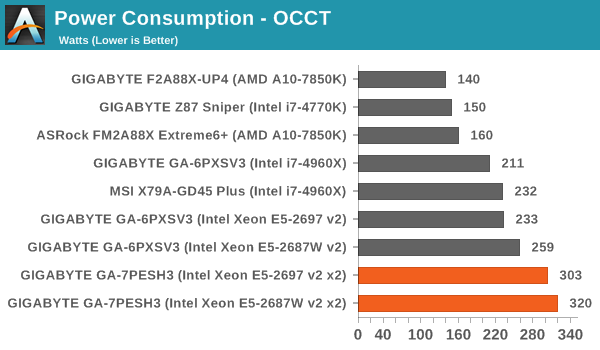 When we compare the system loads between one processor and two processors, it seems odd that the second processor does not seem to add much to the process at load but a good chunk while idle. Note we are comparing the single socket server motherboard to the GA-7PESH3, but it is still much of a jump. Idle power consumption on these boards is quite high, however these machines are built more for a 24/7 workload.

Different motherboards have different POST sequences before an operating system is initialized. A lot of this is dependent on the board itself, and POST boot time is determined by the controllers on board (and the sequence of how those extras are organized). As part of our testing, we look at the POST Boot Time using a stopwatch. This is the time from pressing the ON button on the computer to when Windows 7 starts loading. (We discount Windows loading as it is highly variable given Windows specific features.) 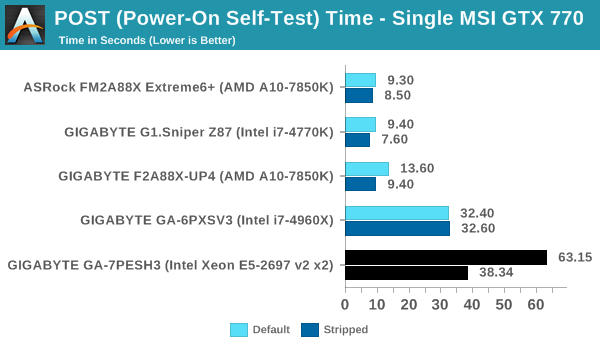 Like any other server-based motherboard we have ever tested, POST times are long. Half of this is going from pressing the ON button and the management software to do its thing before the CMOS takes over. Even then, the dual server-grade Intel NICs have their own integration sequence, along with the RAID subsystem. It all adds up, and that is why we can cut it down to under 40 seconds by disabling controllers if they are not in use.

Rightmark:AA indicates how well the sound system is built and isolated from electrical interference (either internally or externally). For this test we connect the Line Out to the Line In using a short six inch 3.5mm to 3.5mm high-quality jack, turn the OS speaker volume to 100%, and run the Rightmark default test suite at 192 kHz, 24-bit. The OS is tuned to 192 kHz/24-bit input and output, and the Line-In volume is adjusted until we have the best RMAA value in the mini-pretest. We look specifically at the Dynamic Range of the audio codec used on board, as well as the Total Harmonic Distortion + Noise. 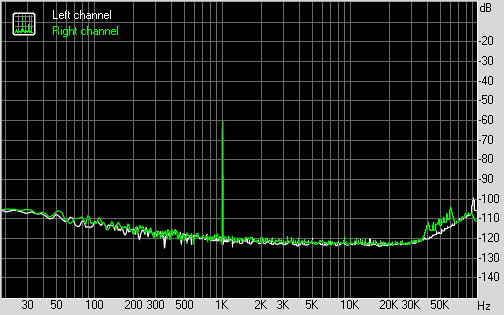 Dynamic Range of the GIGABYTE GA-7PESH3 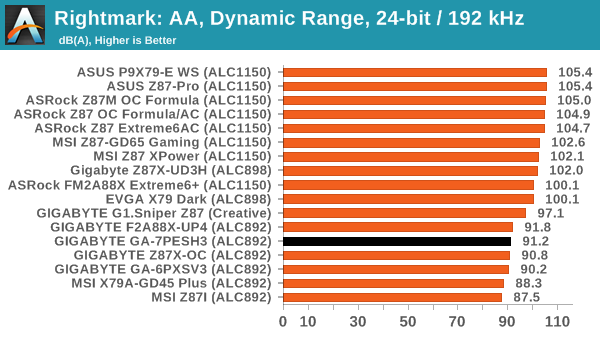 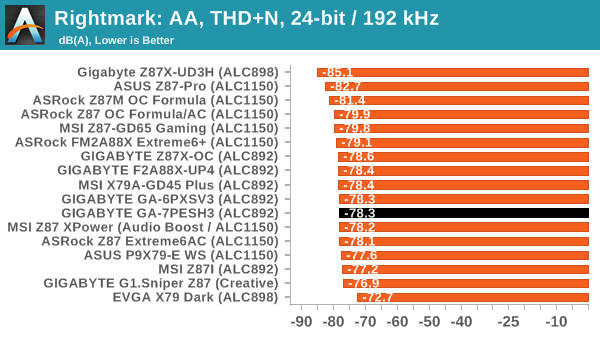 As the 7PESH3 is different to our previous 2P server motherboards in actually having motherboard audio, it should be applauded. The downside is that the ALC892 is the midrange 7.1 Realtek NIC, and is usually outperformed by the ALC898 and ALC1150. For a motherboard that costs $640, I am in two minds as to demand the higher codec. Audio might not be a target for a system like this, however the price demands something better than average.

For this benchmark, we transfer a set size of files from the SSD to the USB drive using DiskBench, which monitors the time taken to transfer. The files transferred are a 1.52 GB set of 2867 files across 320 folders – 95% of these files are small typical website files, and the rest (90% of the size) are small 30 second HD videos. In an update to pre-Z87 testing, we also run MaxCPU to load up one of the threads during the test which improves general performance up to 15% by causing all the internal pathways to run at full speed. 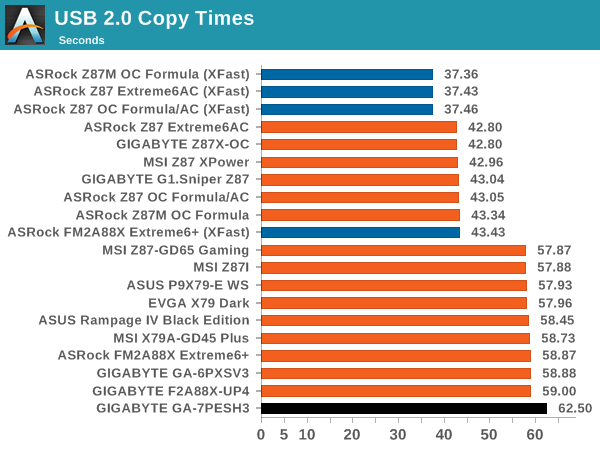 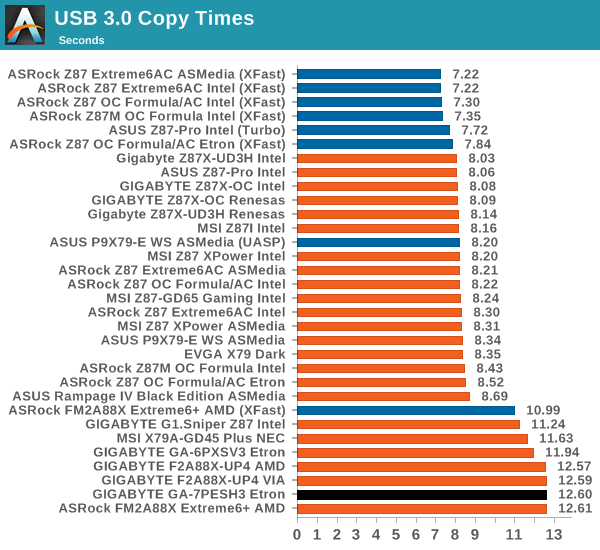 The consumer oriented business units at the major motherboard manufacturers have managed to implement a form of USB 2.0 (either in hardware or software) on their products to achieve around 43 seconds in our test. Those that have not implemented this difference hit around the 60 second mark, like the 7PESH3 does. The USB 3.0 also comes out slower than a consumer model due to the use of controllers.

Deferred Procedure Call latency is a way in which Windows handles interrupt servicing. In order to wait for a processor to acknowledge the request, the system will queue all interrupt requests by priority. Critical interrupts will be handled as soon as possible, whereas lesser priority requests such as audio will be further down the line. If the audio device requires data, it will have to wait until the request is processed before the buffer is filled.

If the device drivers of higher priority components in a system are poorly implemented, this can cause delays in request scheduling and process time. This can lead to an empty audio buffer and characteristic audible pauses, pops and clicks. The DPC latency checker measures how much time is taken processing DPCs from driver invocation. The lower the value will result in better audio transfer at smaller buffer sizes. Results are measured in microseconds. 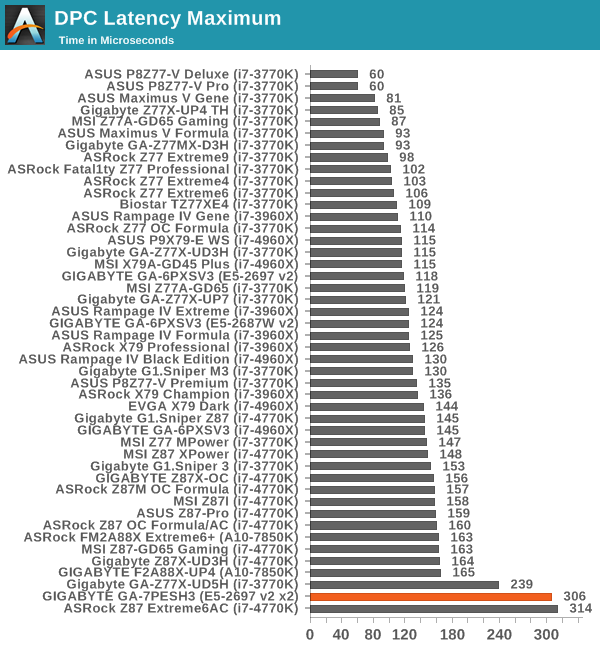 The DPC Latency for the 7PESH3 was a little odd: 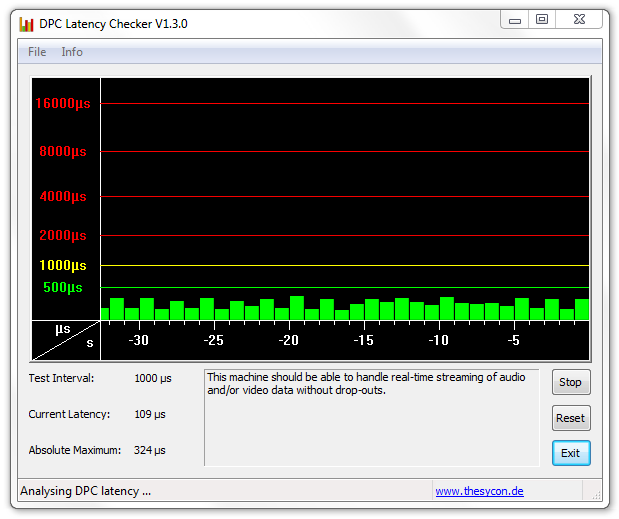 The system seems to oscillate between ~100 microseconds and ~300 microseconds. Normally on most consumer motherboards this would happen due to the presence of an abnormal WiFi software stack, or an unoptimized BIOS. Server motherboards historically have done rather poor in this test, perhaps indicating that the server management tools constantly polling temperatures and fan speeds might be the contributing factor.