Let's start with single-drive performance to get the baseline level of performance so we have an idea of what to expect from a 4-drive array. We ran HD Tach on one of the 1TB 5,400rpm Toshiba drives as HD Tach produces a nice graph of performance across all LBAs. 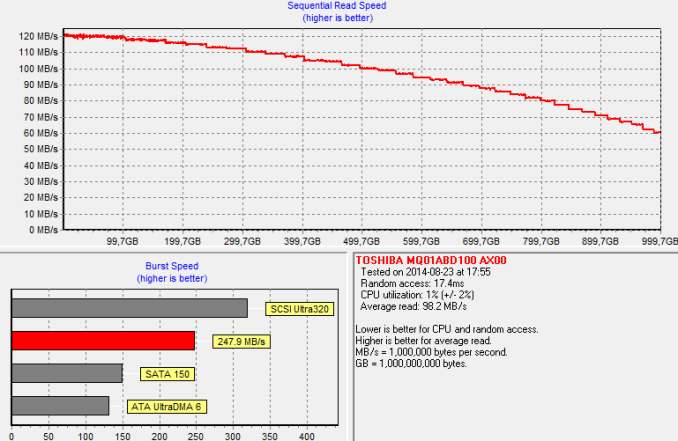 Peak performance is 120MB/s for one drive, so it is reasonable to expect a maximum performance of ~480MB/s from a RAID 0 array. However, by the last LBAs the throughput drops to half that amount.

In a RAID 0 configuration, the M4 manages up to 480MB/s, which is where the hard drive becomes the bottleneck. That is far from the maximum performance of Thunderbolt 2 (20Gbps or 2.5GB/s) but over 100MB/s faster than what USB 3.0 is typically capable of providing.

With RAID 5 the write performance takes a hit because of the parity writes (you can only write data to three disks simultaneously as the fourth one will be writing parity data), but read speed is also affected. It could be a limitation of the RAID controller itself because some RAID controllers do not tend to work as well with RAID 5 because of the processing power required for parity calculation. RAID 10 also experiences similar performance loss as in theory RAID 10 should provide the same read performance as RAID 0, but that is not the case with the M4 and its RAID implementation.

I wanted to see what the M4 is capable of when fitted with faster hardware, so I took four 256GB SSDs and configured them in a RAID 0 array. I ran the same tests as above but added a test with queue depth of 16 to see the maximum throughput of the M4.

With SSDs the M4 takes more advantage of Thunderbolt, although performance is still not that great. Four SATA 6Gbps SSDs should be capable of ~2GB/s in sequential read, so it is clear that the SATA/RAID controller (or the RAID controller) is limiting performance. For mechanical storage that is not an issue but we can see why Promise is not offering an SSD configuration – it simply would not be worth the extra cost since the performance upgrade is rather insignificant, at least for video work where random accesses are not critical.

Random performance is obviously multiple times better with SSDs but nowhere near what it should be with four SSDs in RAID 0. Even a single SATA 6Gbps SSDs scores around 90MB/s in random read and easily over 200MB/s in random write, so the SATA/RAID controller appears to be the bottleneck once again.