Since this is a gaming notebook, we'll start our performance overview there. It's going to be interesting seeing how the GTX 870M compares to the GTX 880M and GTX 860M; the latter was generally sufficient for my gaming needs, but we should see a decent jump in performance with the 870M. I still want a Maxwell-derived GPU to compete with 870M and 880M, but we'll probably have to wait until later this year (or early next?) for that to come.

We have our usual suite of 1366x768 Medium, 1600x900 High, and 1920x1080 Ultra (max quality with 4xAA). I won't include all of the results here but instead focus on the "Mainstream" (1600x900 with ~high settings) and "Enthusiast" (1080p maximum quality) performance. Also note that generally speaking bumping up to the native 2880x1620 resolution will require dropping to our Mainstream (High) settings – and in some cases even lower – which I'll include in the Enthusiast charts for comparison. 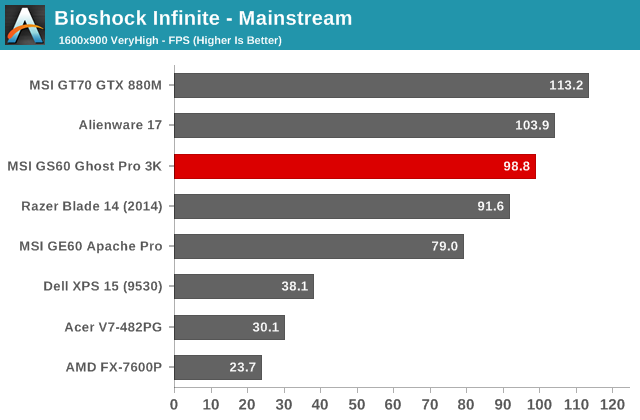 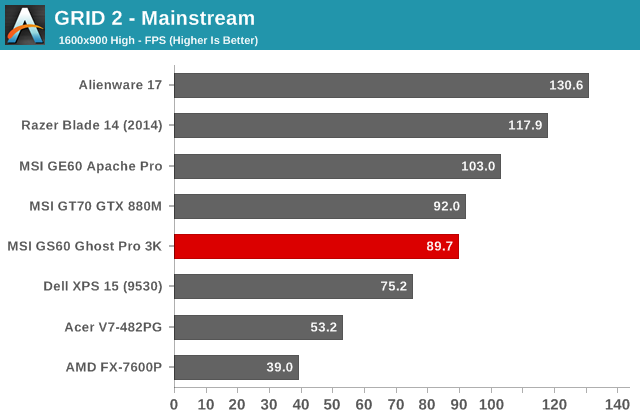 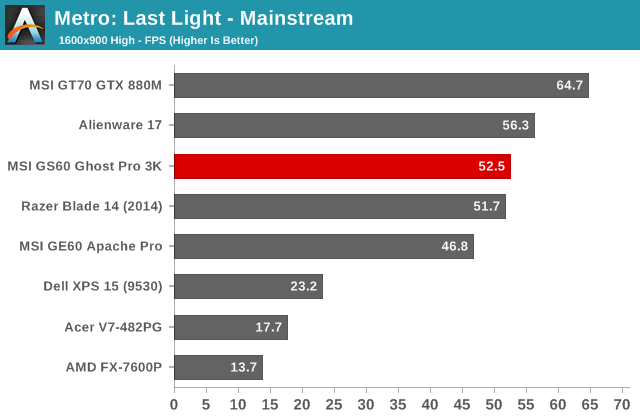 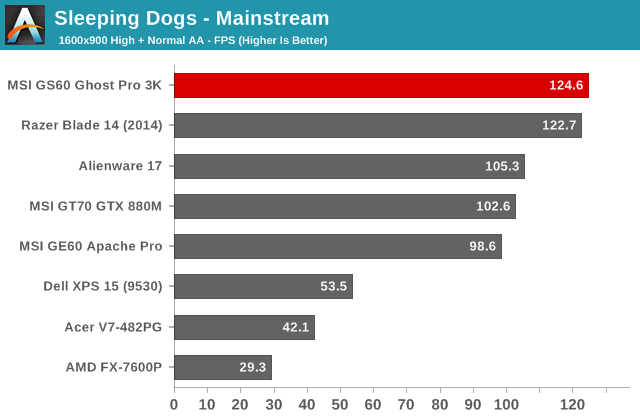 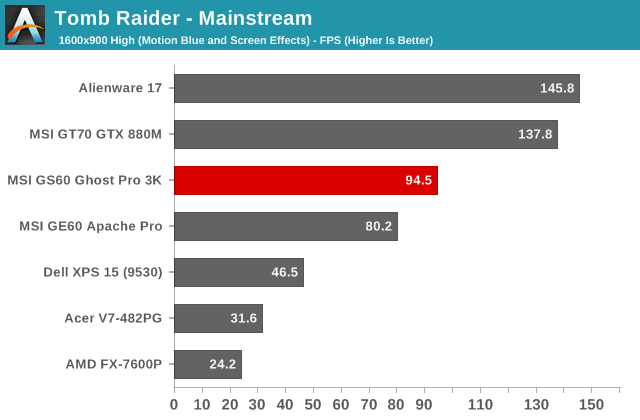 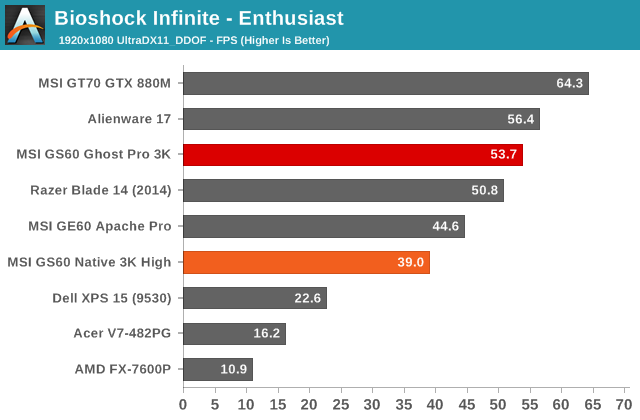 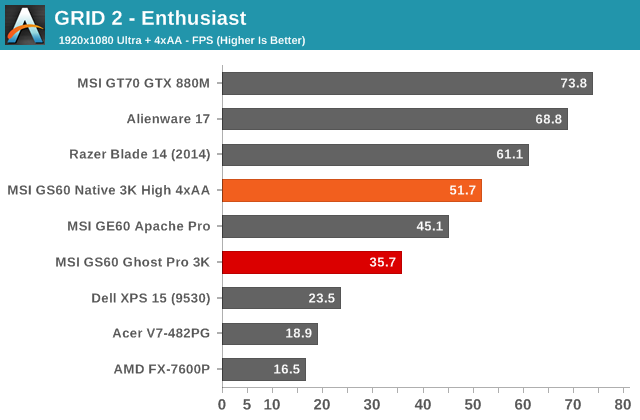 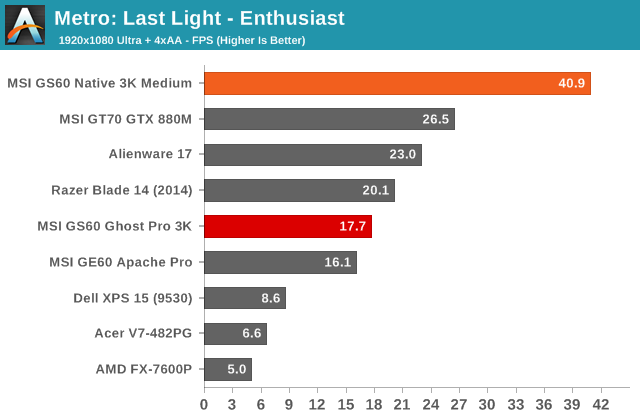 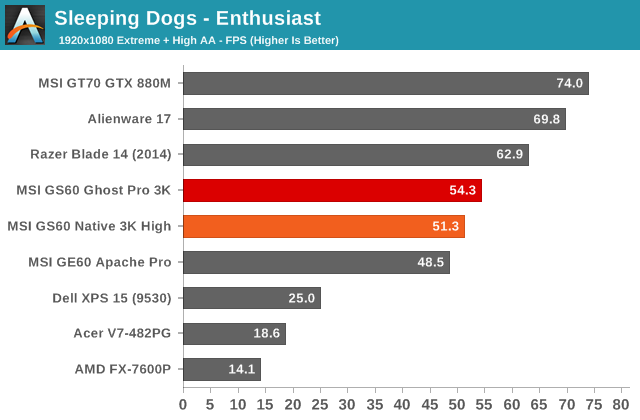 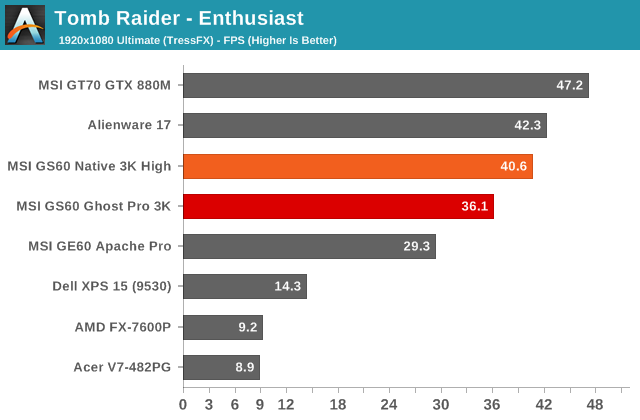 There aren't any real surprises to be found. In general, the GTX 870M is anywhere from 10% to as much as 25% faster than the GTX 860M in gaming results. While this means that 870M may be able to run certain settings while staying above 30FPS where the 860M falls short, in practice it mostly means turning off a few settings to tune the performance. Thankfully, NVIDIA does most of the dirty work for you and if you use GeForce Experience you can typically get 40+ FPS with settings that provide a good blend of image quality and performance. Unfortunately (maybe), GFE drops the screen resolution to 1920x1080, so if you want to take advantage of the native resolution you'll have to find your own balance of settings. For what it's worth, GFE tends to target slightly lower quality settings than our Enthusiast options, resulting in average frame rates closer to 50-70FPS on most titles.

Of the games we've tested, Metro: Last Light continues its reign as GPU killer, knocking performance down to sub-20 FPS rates even on a GTX 870M when we use our Enthusiast settings. Most games aren't quite so demanding, but 3K resolutions are a different matter. All of the above games can still hit 40FPS at native resolution and Mainstream (High) settings, again with the exception of Metro which needs to run at our Value settings for 3K to become playable. The graphics look super crisp at 3K, though aliasing still seems to be a problem on some games. GRID 2 in particular has aliasing problems, but even at 3K High settings the frame rates are still quite high, so enabling 4xAA fixes the problem.

Overall, GTX 870M is a potent gaming GPU, but the extra 10-25% increase in performance over GTX 860M isn't a huge deal. It uses quite a bit more power to hit the higher frame rates, which in turn yields higher temperatures, and Maxwell GPUs do have a few extra (like Compute 5.0 support). The price difference between GS60 models with GTX 860M and GTX 870M ends up being $200, with the 3K display adding an additional $100. Unfortunately, you don't get the choice between 860M and 870M with the 3K display, nor do you get a 256GB SSD configuration with 870M and a 1080p display – you have to take the entire package.