While most of the time enthusiasts are playing around with the latest and greatest, the cheaper low performance platforms are usually the high volume movers. As we explained in our Kabini review, AMD has taken the unusual step of producing an upgradable platform for as little as $74. The motherboards for the AM1 Kabini platform range from $31 to $47, and today we are reviewing the GIGABYTE AM1M-S2H which retails at $35.

Perhaps it is just me, but a motherboard for $35 seems almost unreal. If we consider any markup by the retailer, the per-IC margins must be very minimal indeed, unless the manufacturers were selling everything at cost in order to get an idea off the ground. The AM1 range varies from $31 to $47, or $59 if you consider the one motherboard that supports a 19-volt DC-In, but they are all in either the mini-ITX or micro-ATX form factor.

The GIGABYTE AM1M-S2H falls near the bottom of that price range, although it is the larger microATX size with full-sized DDR3 support. There is no overclocking possible on this motherboard, and as such the power delivery and lack of a power delivery heatsink is suited for the low powered Kabini APUs at stock speeds. For connectivity the motherboard has three USB 2.0 headers, two SATA 6 Gbps ports, two fan headers, two USB 3.0 ports, an LPT header, a COM header, a 2.1 audio codec, gigabit Ethernet, a PCIe 2.0 x4 slot and two PCIe 2.0 x1 slots. Perhaps surprisingly, due to the low cost nature of the product, we do get GIGABYTE’s Dual BIOS here despite the increased cost to the manufacturer. When I have previously met with GIGABYTE, the product managers in the motherboard business unit insisted that Dual BIOS is a great feature no matter the price of the motherboard; as an enthusiast, I would agree.

The AM1M-S2H formed the backbone of our Kabini review, which it performed without incident. The full length PCIe slot affords use of a full sized graphics card and perhaps unsurprisingly the Athlon 5350 we used for testing still gave frame rates above 30 FPS with our standard gaming benchmarks and setups. Performance of the motherboard on the system side of things gave a DPC Latency and Audio results similar to what we would expect with a low powered platform/ALC887 audio codec, similarly with boot times. USB speeds are slightly slower than the mainstream platforms, but still within a few percentage points.

The whole focus of Kabini is for the system to be upgradable. AMD has aimed the platform for low powered use (digital signage, library computers) similar to Intel’s Atom but aim to offer faster DRAM support, upgradability and price competitiveness. The AM1M-S2H certainly hits on that last point, although the depth of the system will rely on whether AMD will refresh the Beema line for the same socket.

The AM1 platform uses the FS1b socket, which unlike the AM3+ or FM2 sockets is a nice square shape which allows for a better orientation of CPU coolers and brackets. The socket only uses two holes for push-pin connectors, and in our testing the CPU cooler that comes with the APU in the box works fine at stock speeds. There are very few aftermarket FS1b CPU coolers to choose from, although the distance to any other features on the motherboard should not make this much of an issue. 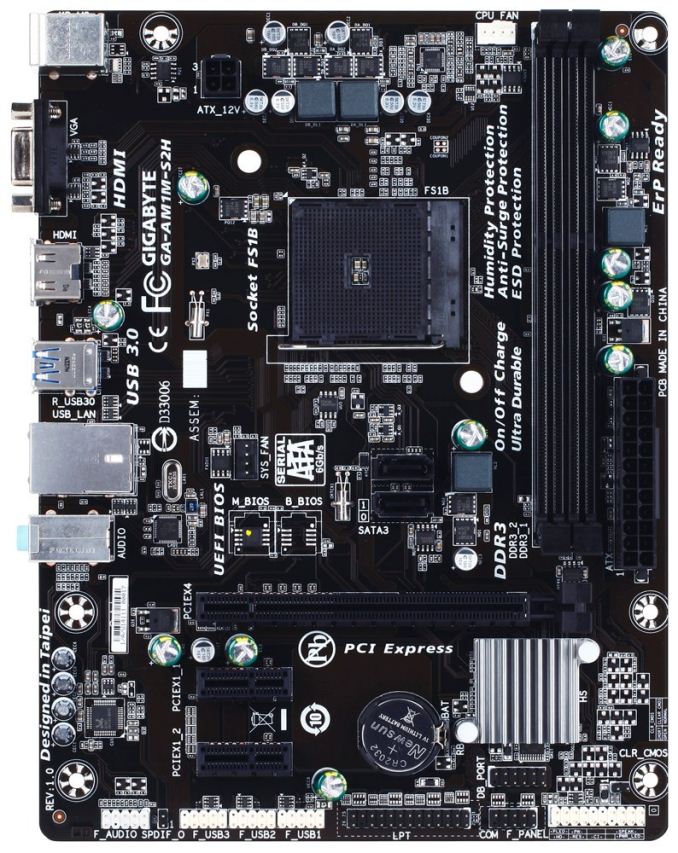 The 4-pin ATX power connector is well away from the socket, meaning that cables need not be stretched over the motherboard for attachment – such is the benefit of mATX over some mini-ITX designs. The two-phase power delivery has no heatsink, and the two CPU fan headers are at opposite corners of the socket. The 4-pin CPU fan header in white is to the top right of the socket and the 4-pin SYS header is to the bottom left, above the PCIe slots. Near this latter fan header are the two BIOS chips for GIGABYTE’s dual BIOS which makes an appearance here despite the added cost for the manufacturer.

To the bottom right of the socket is the two SATA 6 Gbps ports. Being right in the middle of the motherboard is a rather odd place for SATA ports. I understand that cheaper products have the connectors coming out of the motherboard, but having them here is a little silly. It means that any user who wants to have a SATA device (which will be anyone not booting from USB) will have to place the cable over half the motherboard to reach – not a good design plan. 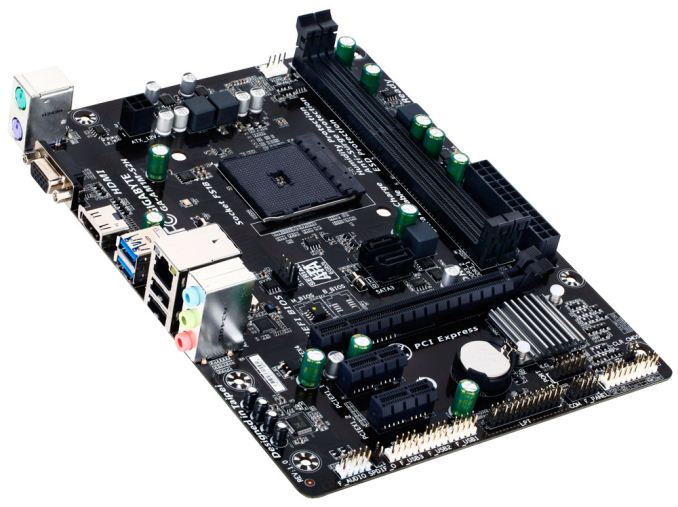 The DRAM slots use a double sided latch mechanism and hide no extra controllers around the perimeter. Because the Kabini platform uses an on-die Fusion Controller Hub for IO, the heatsink in the bottom right is for the SuperIO IC dealing with extra connectivity or any PCIe lane management. For this price there are no power/reset buttons, nor a two-digit debug display, but we do get a COM header and an LPT header as well.

This motherboard does have three USB 2.0 headers at the bottom, which is perhaps a little odd but allows system manufacturers to design cases around the IO depending on the request of their clients. Next to these is the audio side of the motherboard which uses a Realtek ALC887 2.1-channel codec – users needing the ALC892/898 will have to look for a more expensive motherboard.

The rear panel contains separate PS/2 connectors for a mouse and keyboard, a D-Sub video output, HDMI, two USB 3.0 ports, two USB 2.0 ports, a Realtek network interface and audio jacks. Given the use case for this platform, perhaps a ClearCMOS button would have not been warranted, even though I like to see them on home systems.

If Kabini is all about low-cost, then it makes sense when manufacturers like GIGABYTE take advantage of deals like Realtek’s audio + network combination. Perhaps $35 for a motherboard is too low to see a USB 3.0 header, although that would either require moving the USB 3.0 ports from the rear panel or adding a controller, which would have a noticeable cost. 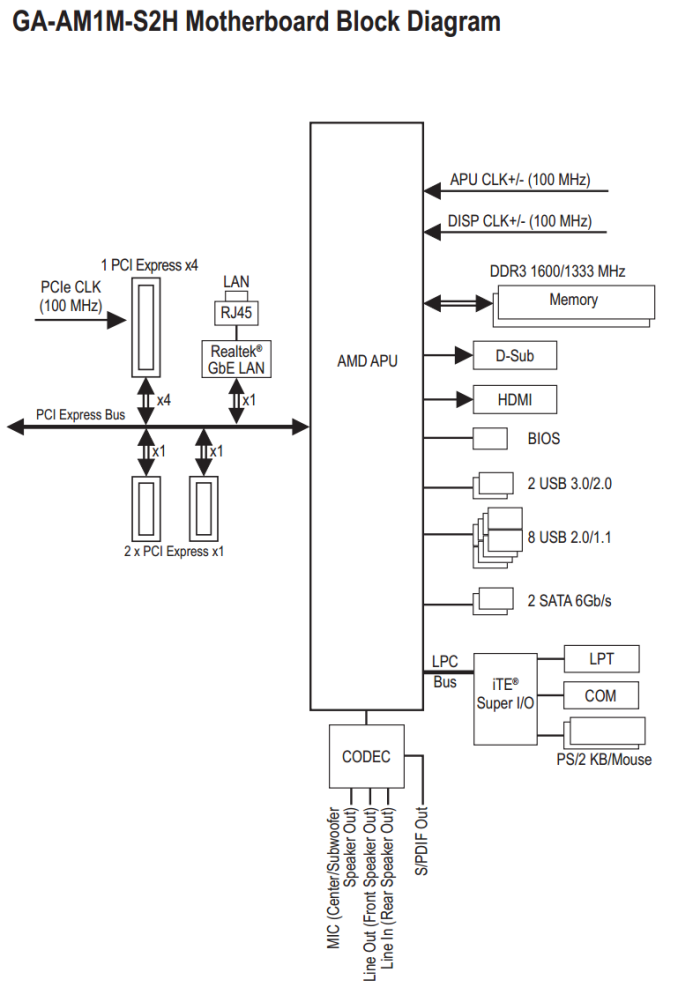