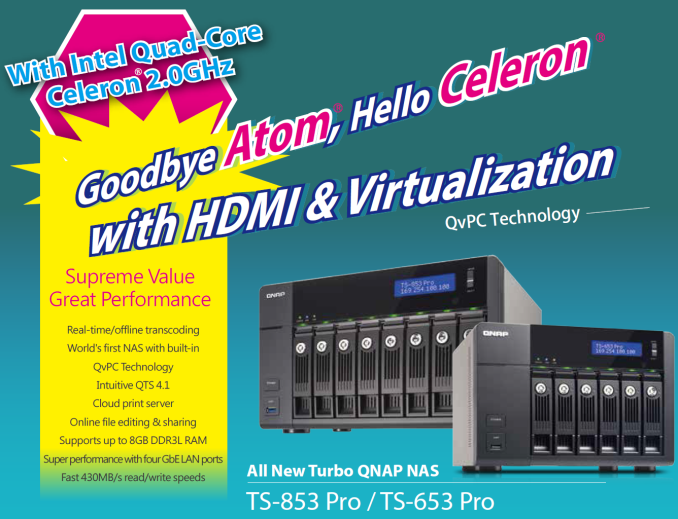 The launch of the QNAP TS-x51 series was covered in great detail. QNAP took the lead over other NAS manufacturers in opting for the 22 nm Atom SoCs. While we were expecting the first Silvermont-based NAS units to use either Avoton or Rangeley, QNAP surprised us by opting for Bay Trail-D with the Celeron J1800. The advantage was that the Celeron J1800 included the Quick Sync engine, which enabled some nifty multimedia features targeting home consumers.

Fast forward a few weeks, and we have QNAP's play targeting business users using the same platform. The difference in the hardware relates to the choice of the Bay Trail-D part. Instead of the Celeron J1800 (which was a 2C/2T part), we have the Celeron J1900 (a 4C/4T part). While the 2-bay version comes with 2x GbE ports, the others come with 4x GbE ports. All the innovative features from the TS-x51 series (hardware transcoding and Virtualization Station, mainly) are present in the x53-Pro series too. Due to the availability of more resources, it is possible to run two VMs concurrently in the x53 Pro (compared to one in the x51). Since we have already touched upon the two main features in our x51 launch piece, we will not discuss them in detail here.

QNAP has bundled all the business-oriented features of the x53 Pro under the QvPC umbrella. QNAP projects using the x53 Pro NAS as a business PC in addition to fulfilling the tasks of a SMB networked storage device. The display is driven through the HDMI port and the interface is through the HD Station package (Hybrid Desk). Three 'views' are made available:

The HD Station package also supports touchscreen monitors. Since Virtualization Station is supposed to soon support Android VMs, this is going to be a nifty feature.

Another SMB-targeted feature in QTS 4.1 is  IT Management Station, based on Mandriva Pulse. It enables management of IT resources and applications for the whole business in a simplified manner. Tasks include inventory management, remote control, cloning, deployments and backup / restore.

The x53 Pro series (like the x51 series) also supports the UX-500P / UX-800P expansion towers. Using these, consumers can add 5 or 8 bays to their existing NAS by connecting via an USB 3.0 port. The various models in the x53 Pro series, along with their specifications, are provided below. 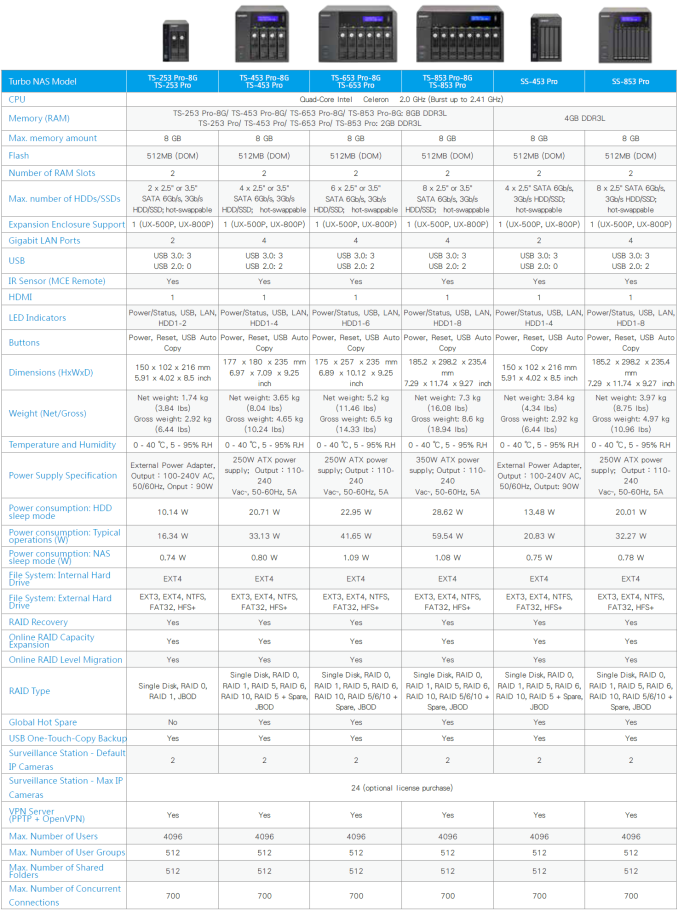 Interestingly, QNAP has two SS- models which support only 2.5" drives. It looks like the market for NAS units which support only 2.5" drives is slowly taking off. Earlier this year, we saw the introduction of Synology's DS414slim sporting a Marvell ARMADA 370 SoC. However, these are based on Bay Trail Celerons, and definitely much more powerful. With SSDs becoming cheaper by the day, all-flash arrays will soon be within the reach of even SMBs. Units such as the SS-453 Pro and SS-853 Pro are well-suited to tap into that market.