The industrial design of the QNAP TS-451 is quite utilitarian. Despite the metal chassis, the drive caddies are themselves made of plastic and feel a bit more flimsy that what we would like. At the price point that QNAP wants to place the product, consumers would be looking for a premium product with proper metal caddies (like the ones that come along with the TS-x70 and the rackmount units). Apart from the main unit, the package consists of the following:

In terms of chassis I/O, we have a USB 3.0 port in front (beneath the power and backup buttons). On the rear side, we have the power inlet, a USB 3.0 port, two USB 2.0 ports, two GbE ports and a HDMI port. Since we are in the middle of a long-term evaluation (for the virtualization and multimedia capabilities), a teardown hasn't been performed yet, but Legion Hardware disassembled the unit and found two ASMedia ASM1061 SATA to PCIe bridges as well as an Etron EJ168A USB 3.0 host controller (two-port hub chip).

The various components of a Bay Trail-D part (the family to which the Celeron J1800 belongs) are provided in the diagram below. 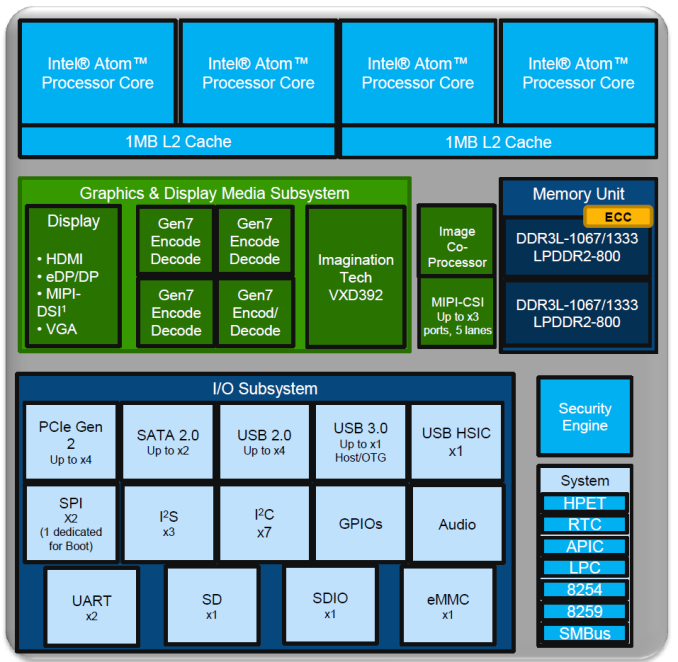 Obviously, two cores are cut, as are a number of miscellaneous ports, in the Celeron part we are looking at.

QNAP's QTS is one of the more full-features NAS operating systems that we have seen from off-the-shelf NAS vendors. A diskless unit can be set up in three ways - the first one is to use QNAP's cloud service (at start.qnap.com) and enter the Cloud ID that comes in the getting started guide. The second one is to use QNAP's QFinder utility and set up the unit through that. The third one is to somehow determine the DHCP IP received by the unit and access the unit directly over the web browser. We chose the second option to get things up and running.

In terms of usage, the web interface allows multi-tasking and provides a desktop environment within the browser. It is a cross between a mobile OS-type app layout and a traditional desktop environment. From our experience, even though the features are awesome, we did find the UI responsiveness to be a bit on the slower side compared to, say, Asustor or Synology. Some of the relevant features are exposed in the gallery below.

We have not dealt with higher-level applications and the mobile app ecosystem in the above gallery. A discussion of those will be made in the upcoming coverage of the virtualization and multimedia capabilities.

The NAS's primary purpose is, of course, the handling of the storage aspects - RAID setup, migration and expansion. Our full test process of starting with one drive, migrating to RAID-1, adding another drive to migrate to RAID-5 and yet another one to expand the RAID-5 volume using a total of 4x 4 TB WD Re drives successfully completed with no issues whatsoever.

We simulated drive failure by yanking out one of the drives during data transfer. The operations from the client didn't face any hiccups, but the NAS UI immediately reported the trouble (alerts can be configured). Inserting a new drive allowed for rebuild. There was a bit of an issue with the NAS not allowing for the hot-swap because of some pre-existing partitions on the hard drive that was inserted as new, but the issue couldn't be reliably reproduced. QNAP suggested the use of drives free of partitions for the empty bays / replacements for reliable expansions / rebuilds.