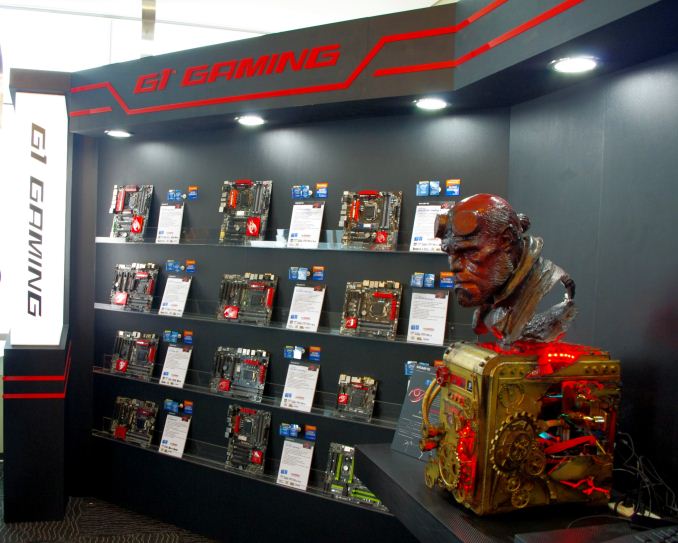 Last year we covered the whole GIGABYTE VIP suite at the Taipei 101, and this year there was a new, more focused feel of gaming to it.  In the center of the main room was a 3-screen racing setup based on a GIGABYTE system, next to some very expensive Lamborghini Murciélago wheels.  The new focal points for GIGABYTE with the 9-series motherboard launch are the new line of Gaming motherboards, and the Black Edition motherboards that go through 168-hours of server-level stress testing in order to qualify.  I picked out a few of the most interesting models I have not had a chance to get to grips with yet. 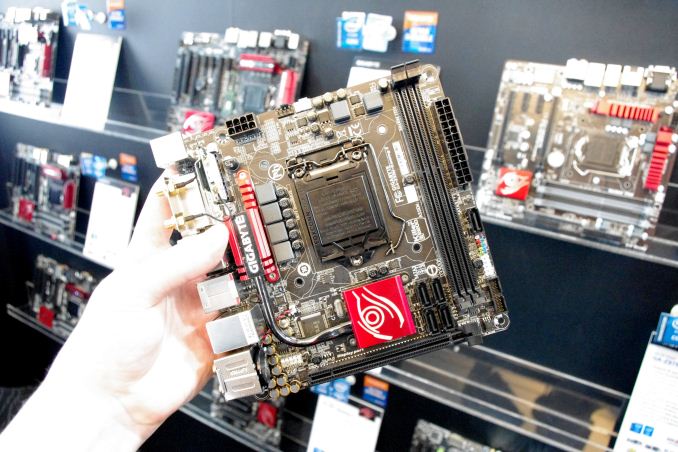 The Z97N-Gaming 5 follows GIGABYTE’s naming structure of N being the mini-ITX model, and with this new SKU we can clearly see better placement of the DRAM slots, the power connectors (I like the look of that 8-pin CPU which has moved) and also the beefed up audio in the bottom left hand corner. 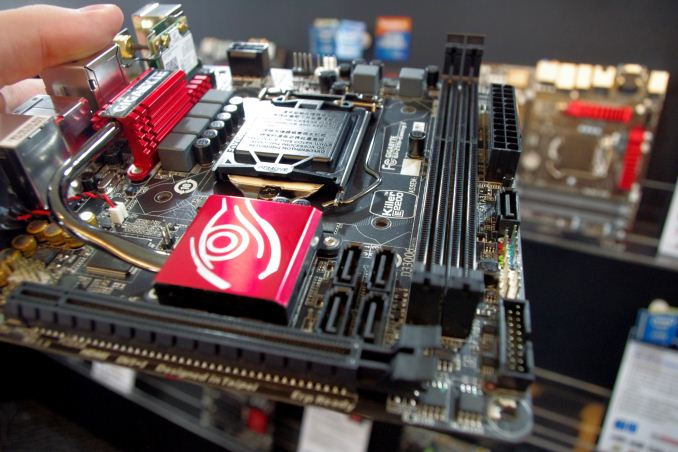 There is a Killer NIC onboard, along with what looks like dual-stream 802.11ac.  Five of the SATA ports from the chipset are being used, with one on the edge to make single-drive systems easier to assemble.  The front panel connectors also get moved to the edge, along with a USB 3.0 connector.

Most of this is possible as the socket has moved up and the chipset has moved down.  On the rear IO we see gold plated connectors for the audio and video outputs in order to minimize rusting for these connectors.  The Z97N-Gaming 5 retails for around $160, which puts it in the firing like of the ASUS Z97I-Plus in terms of price.

Gaming focused motherboards tend not to venture out of the Z-series chipsets, although GIGABYTE experimented with it on B85 in the last generation.  With this generation, we now get a gaming motherboard on H97 at the Gaming 3 level. 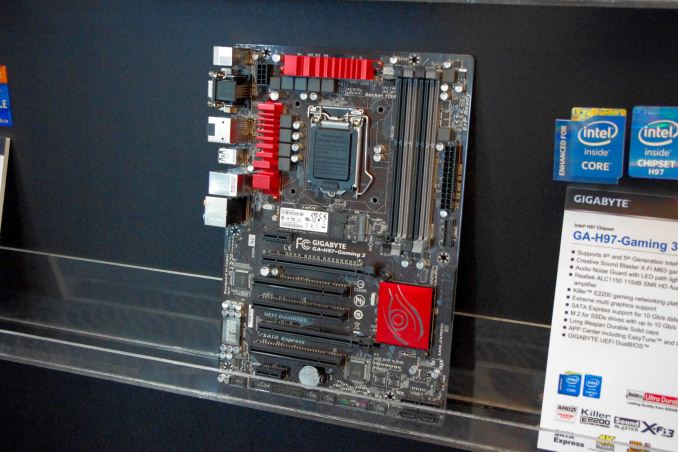 At this price point, features have to be minimized, but we at least get M.2, SATA Express, AMP-UP audio and at least six SATA 6 Gbps ports.  I imagine there has to be some form of lane sharing if RST is supported on both the new storage options, and part of the cost cutting is given in the power delivery heatsink arena.  We could argue that as there is no CPU overclocking on H97, this is an area that just needs to be sufficient for any CPU at stock levels.  It was an interesting spot nonetheless, showing that GIGABYTE will build a gaming product at this level.

What used to be the G1.Sniper series on the Intel mainstream chipsets has morphed into the Gaming G1, complete with the new styling for the gaming range.  Note that now the styling synchronises up with the graphics card range, which is always a good thing.  The Gaming G1 will be one of the top end gaming focused motherboards, with this model using a PLX8747 PCIe switch to enable four-way CrossFire and four-way SLI.  Compare this to the ASUS line-up, where only the workstation motherboard has this functionality.  Of course, using a PLX8747 PCIe switch also comes with added cost. 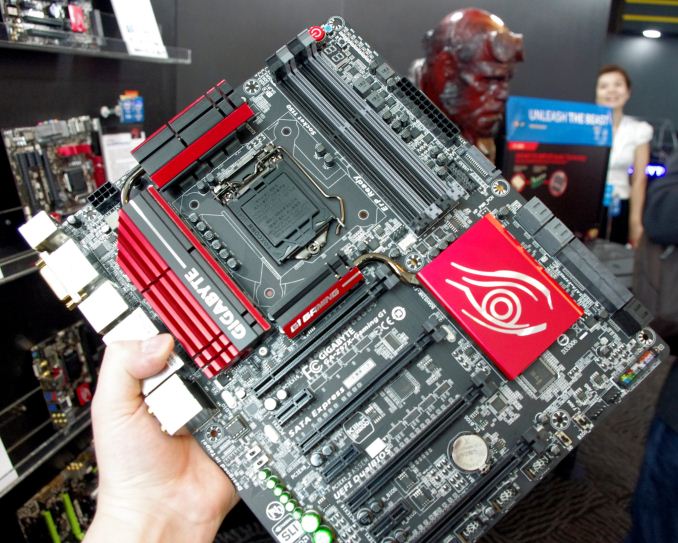 With the PLX chip, we can have PCIe 3.0 x16/x16 for dual card setups or PCIe 3.0 x8/x8/x8/x8 in four-way.  This is paired with the big heatsink around the board shown above, and the additional VGA power comes from a SATA connector on the side.  The system uses a Killer and an Intel NIC, along with SATA Express and what looks like a total of 10 SATA ports, four of which come from two Marvell 88SE9172 controllers.  A USB 3.0 hub puts a total of 8 USB 3.0 ports on the motherboard.  M.2 is not present here, which is a shame as I would prefer it over SATA Express at this point in the evolution of storage. 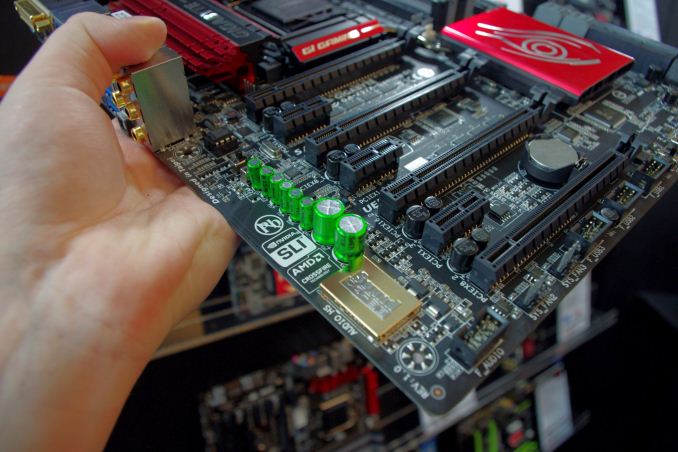 Being a gaming motherboard, we also get upgraded audio based on a Creative Sound Core3D audio codec and filter caps, while GIGABYTE have attached their upgradable OP-AMP technology with gain switches.  The rear IO audio and video connectors are gold plated, similar to the Z97N-Gaming 5 motherboard above. 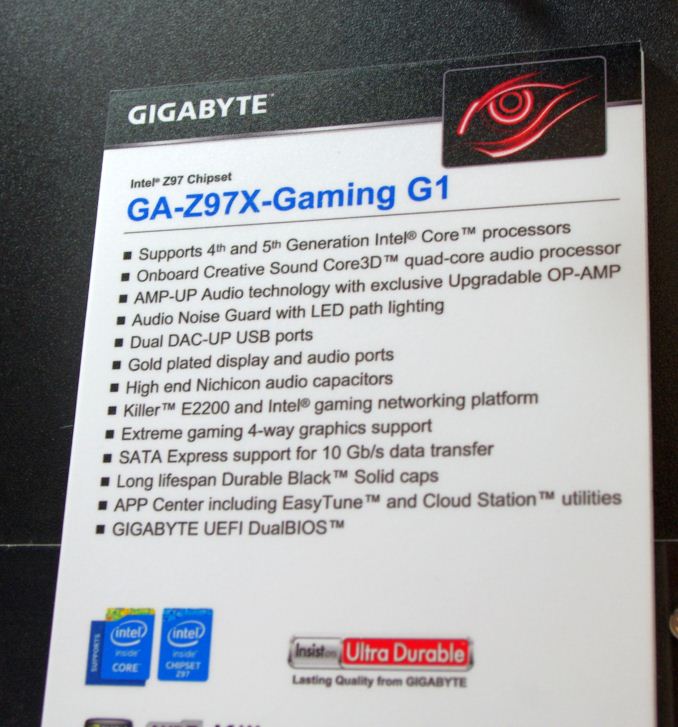 The other side of GIGABYTE’s new lineup is the Black Edition series of motherboards.  As mentioned, they are ‘server-tested’, meaning all the regular tests are done for 168 hours rather than 8-24.  The motherboards built to these specifications also have the black color scheme involved, with the potential for some of the underlying components to be upgraded to more durable models. 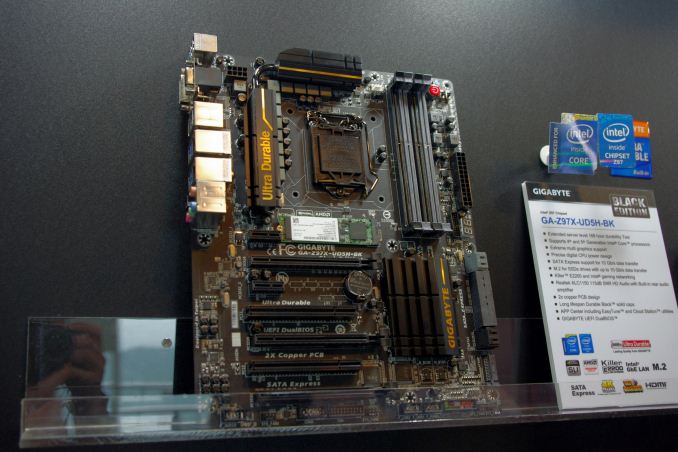 I imagine there will be a slight price premium on these models, but the underlying in-OS performance should be similar to their non-BK counterparts.