With the rapid decrease of NAND prices in the last few years, the SD card market has more or less become a commodity with very little differentiation. We don't typically note minor product releases but we'll make an exception here given that this one is a bit more significant than the average.

Samsung is revamping their whole SD card lineup at once by simplifying it into three product series: Standard, EVO and the PRO. Those who are familiar with Samsung's SSDs notice that the EVO and PRO brands are adopted from the 840 SSD series, which makes sense given Samsung's success in the SSD space and the brand they've been able to build with the 840 EVO and Pro.

Samsung's goal with the branding is to make it as easy as possible for the customer to select an SD card that fits their needs because oftentimes SD cards are marketed using the class system (like class 10), which may not tell much to an average SD card shopper. Electronics stores tend to have isles of SD cards available and differentiating in that space is extremely hard, so Samsung hopes that its simple branding will help to boost sales. Each brand also has a unique color (turquoise for Standard, orange for EVO and black for PRO) that aims to simplify branding even further and to allure customers (we all like vibrant colors, don't we?). 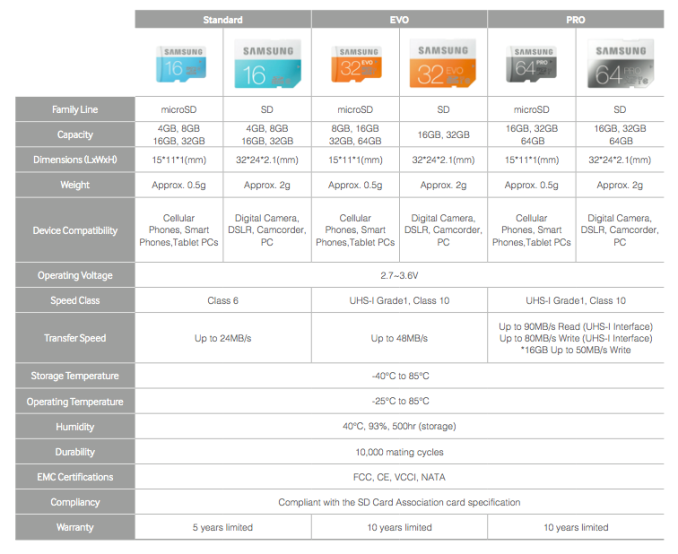 All models are available in both microSD and SD form factors, although available capacities vary as the table above shows. Retail packages with SD and USB adapters are also available.
As one would expect, the PRO is of course the fastest offering available and provides rather impressive transfers rate of up to 90MB/s. Most SD card use scenarios don't require that high throughputs but as 4K video is steadily making its way into the hands of consumers, the storage media has to evolve as well. Some DSLRs can also be picky with SD card performance and especially professionals like to have the fastest card available to make sure the SD card isn't bottlenecking the performance of the DSLR. 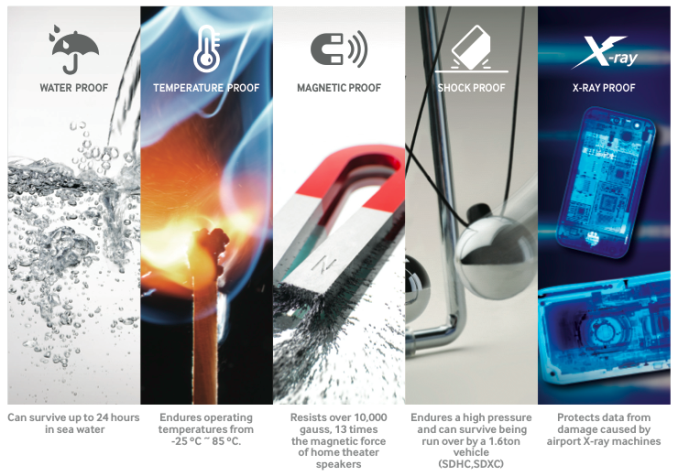 At the low level these are all MLC NAND designs but with varying quality of NAND being used. In fact only a small portion of the NAND meets the requirements for SSDs, the rest of the NAND is used in products where endurance and performance aren't as critical (such as USB drives, SD cards, eMMC...).

Update: As some of you speculated in the comments, the Standard and EVO models do in fact use TLC NAND, while MLC NAND is only used in the PRO model. The info we got from Samsung during the initial briefing was incorrect and we apologize for the confusion.

All in all, the SD card market as a whole is quite uninteresting. When you can get a decent SD card for a tenner or two, it's logical that not much time is spent on the purchase decision or research. Simple branding can help with that and the high-end niche for the PRO model does exist, but I still believe that the average buyer will just get the cheapest card available or the one that is recommended by the sales rep.