Today Qualcomm is rounding out its 64-bit family with the Snapdragon 808 and 810. Like the previous 64-bit announcements (Snapdragon 410, 610 and 615), the 808 and 810 leverage ARM's own CPU IP in lieu of a Qualcomm designed microarchitecture. We'll finally hear about Qualcomm's own custom 64-bit architecture later this year, but it's clear that all 64-bit Snapdragon SoCs shipping in 2014 (and early 2015) will use ARM CPU IP.

While the 410, 610 and 615 all use ARM Cortex A53 cores (simply varying the number of cores and operating frequency), the 808 and 810 move to a big.LITTLE design with a combination of Cortex A53s and Cortex A57s. The latter is an evolution of the Cortex A15, offering anywhere from a 25 - 55% increase in IPC over the A15. The substantial increase in performance comes at around a 20% increase in power consumption at 28nm. Thankfully both the Snapdragon 808 and 810 will be built at 20nm, which should help offset some of the power increase.

The Snapdragon 808 features four Cortex A53s and two Cortex A57s, while the 810 moves to four of each. In both cases all six/eight cores can be active at once (Global Task Scheduling). The designs are divided into two discrete CPU clusters (one for the A53s and one for the A57s). Within a cluster all of the cores have to operate at the same frequency (a change from previous Snapdragon designs), but each cluster can operate at a different frequency (which makes sense given the different frequency targets for these two core types). Qualcomm isn't talking about cache sizes at this point, but I'm guessing we won't see anything as cool/exotic as a large shared cache between the two clusters. Although these are vanilla ARM designs, Qualcomm will be using its own optimized cells and libraries, which may translate into better power/performance compared to a truly off-the-shelf design.

The 808/810 also feature upgraded ISPs, although once again details are limited. The 810 gets an upgraded 14-bit dual-ISP design, while the 808 (and below?) still use a 12-bit ISP. Qualcomm claims up to 1.2GPixels/s of throughput, putting ISP clock at 600MHz and offering a 20% increase in ISP throughput compared to the Snapdragon 805.

Both SoCs have a MDM9x35 derived LTE Category 6/7 modem. The SoCs feature essentially the same modem core as a 9x35 discrete modem, but with one exception: Qualcomm enabled support for 3 carrier aggregation LTE (up from 2). The discrete 9x35 modem implementation can aggregate up to two 20MHz LTE carriers in order to reach Cat 6 LTE's 300Mbps peak download rate. The 808/810, on the other hand, can combine up to three 20MHz LTE carriers (although you'll likely see 3x CA used with narrower channels, e.g. 20MHz + 5MHz + 5MHz or 20MHz + 10MHz + 10MHz).

Enabling 3x LTE CA requires two RF transceiver front ends: Qualcomm's WTR3925 and WTR3905. The WTR3925 is a single chip, 2x CA RF transceiver and you need the WTR3905 to add support for combining another carrier. Category 7 LTE is also supported by the hardware (100Mbps uplink), however due to operator readiness Qualcomm will be promoting the design primarily as category 6.

There's no integrated WiFi in either SoC. Qualcomm expects anyone implementing one of these designs to want to opt for a 2-stream, discrete solution such as the QCA6174. 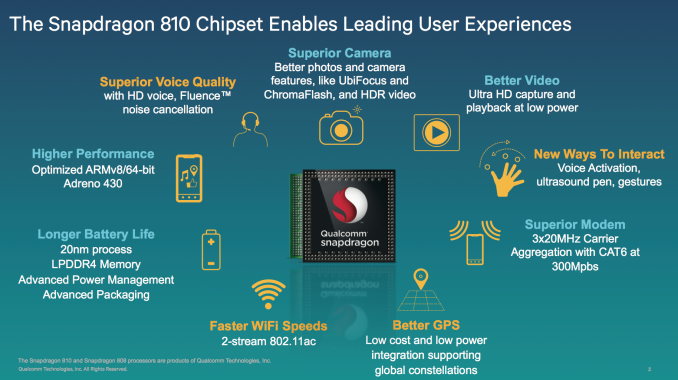 Qualcomm refers to both designs as "multi-billion transistor" chips. I really hope we'll get to the point of actual disclosure of things like die sizes and transistor counts sooner rather than later (the die shot above is inaccurate).

The Snapdragon 808 is going to arrive as a successor to the 800/801, while the 810 sits above it in the stack (with a cost structure similar to the 805). We'll see some "advanced packaging" used in these designs. Both will be available in a PoP configuration, supporting up to 4GB of RAM in a stack. Based on everything above, it's safe to say that these designs are going to be a substantial upgrade over what Qualcomm offers today.

Unlike the rest of the 64-bit Snapdragon family, the 808 and 810 likely won't show up in devices until the first half of 2015 (410 devices will arrive in Q3 2014, while 610/615 will hit in Q4). The 810 will come first (and show up roughly two quarters after the Snapdragon 805, which will show up two quarters after the recently released 801). The 808 will follow shortly thereafter. This likely means we won't see Qualcomm's own 64-bit CPU microarchitecture show up in products until the second half of next year.

With the Snapdragon 808 and 810, Qualcomm rounds out almost all of its 64-bit lineup. The sole exception is the 200 series, but my guess is the pressure to move to 64-bit isn't quite as high down there.

What's interesting to me is just how quickly Qualcomm has shifted from not having any 64-bit silicon on its roadmap to a nearly complete product stack. Qualcomm appeared to stumble a bit after Apple's unexpected 64-bit Cyclone announcement last fall. Leaked roadmaps pointed to a 32-bit only future in 2014 prior to the introduction of Apple's A7. By the end of 2013 however, Qualcomm had quickly added its first 64-bit ARMv8 based SoC to the roadmap (Snapdragon 410). Now here we are, just over six months since the release of iPhone 5s and Qualcomm's 64-bit product stack seems complete. It'll still be roughly a year before all of these products are shipping, but if this was indeed an unexpected detour I really think the big story is just how quickly Qualcomm can move.

I don't know of any other silicon player that can move and ship this quickly. Whatever efficiencies and discipline Qualcomm has internally, I feel like that's the bigger threat to competing SoC vendors, not the modem IP.