Hot on the heels of the AMD announcement regarding socketed Kabini systems, ASUS has released information on two of their main contenders in this segment.  While AMD are expecting most motherboards to be in the micro-ATX form factor, at least a few mini-ITX will appear, and ASUS today are announcing at least one of each in the AM1I-A and AM1M-A. 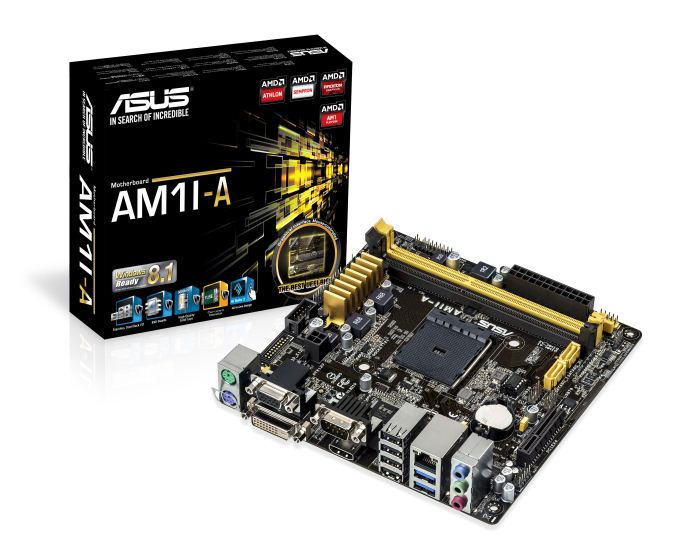 The mini-ITX model uses the FS1b socket (notice only two holes for a CPU cooler), with two DDR3-DIMM slots and two SATA 6 Gbps ports.  The 4-pin CPU power connector is near the edge of the motherboard (to stop cables being passed over components), and similar to other ASUS mini-ITX motherboards the 24-pin ATX power connector is also on the edge.  Although AMD’s initial AM1 announcement put the maximum DRAM capacity at 16GB, ASUS are claiming 32GB DRAM maximum capacity when 16GB UDIMMs are launched. 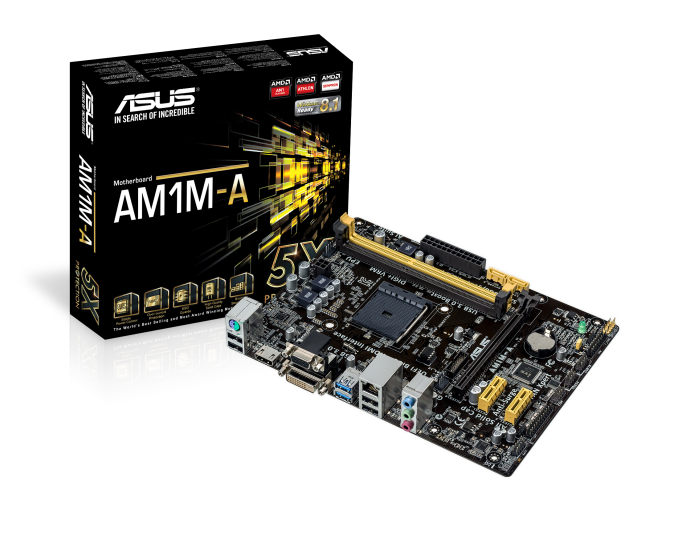 Using the larger micro-ATX form factor with a SoC that only has four PCIe 2.0 lanes might seem a little odd, but it does give the manufacturer space to add some other extra features, as well as cater for users that want more than one PCIe device.  The main focus of the AM1M-A will be on the two PCIe 2.0 x1 slots below the PCIe 2.0 x4 slot. As the SoC is limited to four lanes, the way around this is to either use a switch, or selectively use one or the other.  ASUS has gone for almost a mix, whereby the user can select the speed of the first black PCIe slot to x1, x2 or x4 accordingly.

With the use of a USB 3.0 controller onboard, there has to be some clever allocation of PCIe lanes to make it work.  Chances are that the full length PCIe x16 slot runs at x4 when the two PCIe x1 slots and the internal USB 3.0 ports are not used.  The moment one of them is in use, the full length slot becomes an x1 to release the bandwidth.  The allocation would most likely happen at boot time, making the setting an option in the BIOS to enable or disable.  I am asking ASUS which setting is default, though I would imagine the USB ports being enabled is the default setting to allow users to plug everything in.  This means that if you need specifically a PCIe 2.0 x4, then it has to be enabled in the BIOS.

Using the chipset diagram for Kabini:

We see that the USB 3.0 controller is using one of the x1 PCIe lanes normally geared for the Wi-Fi controller.  It would therefore look like that the PCIe 2.0 x4 and the two PCIe 2.0 x1 slots are also independent, such that the SoC actually has eight PCIe 2.0 lanes for use, but only as one set of four and four sets of one.

We are still unsure if AMD’s $60 price point is the ultra-low end objective of the AM1 platform (APU + motherboard) or the high end.  Pricing from ASUS is TBD, but both boards should be available when the platform is launched on April 9th.