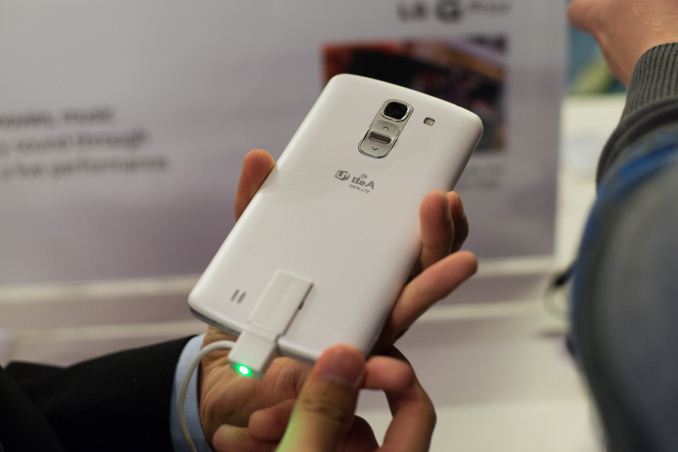 At MWC, LG announced their new G Pro 2, which was written up for an early hands-on and some analysis based upon the information given out by LG’s press release on the device. This is definitely not a device that was unexpected either, as the Optimus G Pro was unveiled at MWC as well, and was effectively a similar upgrade from the Optimus G, with a bigger display, and added a removable battery and microSD slot. What is different is that the G Pro 2 doesn't have a newer SoC than the one found in the G2. It's the same MSM8974AA chipset. 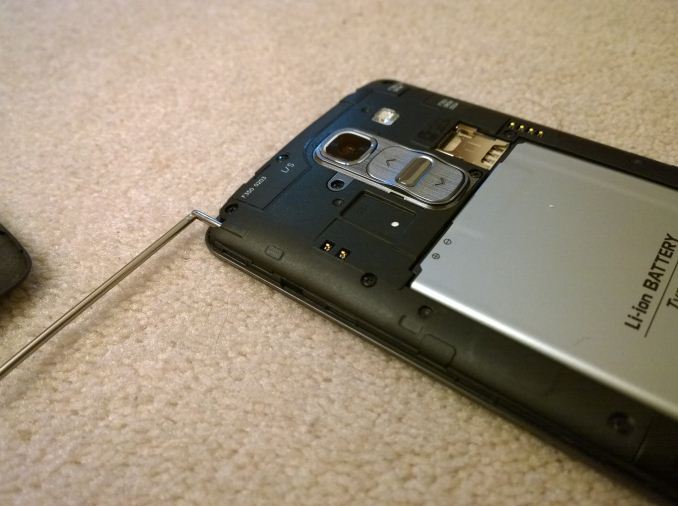 In the same vein as the Optimus G Pro, the G Pro 2 is a phablet that is a direct cousin of the G2. Some news outlets have described it as a flattened G Flex, but there’s more to it than that. While the G2 and G Flex both had a flat black bezel in the front, the G Pro 2 adds a pinstripe texture beneath the glass that makes it shimmer under direct light. 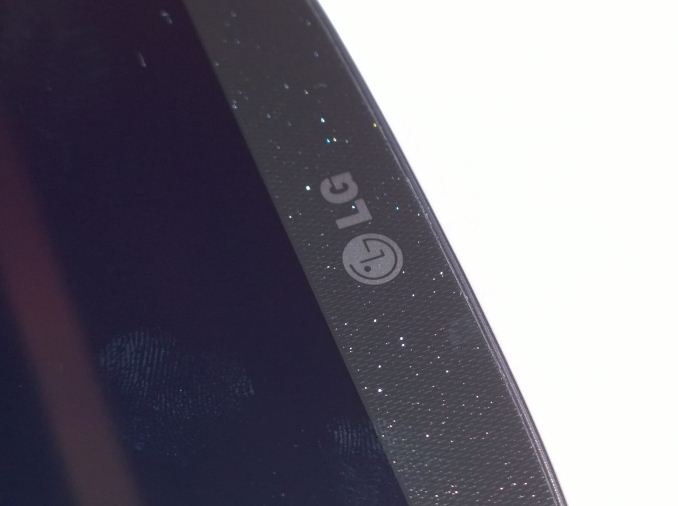 However, the real story is the back cover, because LG has finally gotten rid of the glossy finish and replaced it with a matte back cover that is reminiscent of the Samsung Galaxy S2, but with a much finer texture. For a plastic phone, the G Pro 2 is an example of how to do things right, as the fine texture is understated and looks as if the clear glossy coat of the LG G2 has been removed to leave the textured plastic underneath. The side is also a matte plastic, although the finish is of a much higher grain to approach a glossy finish. 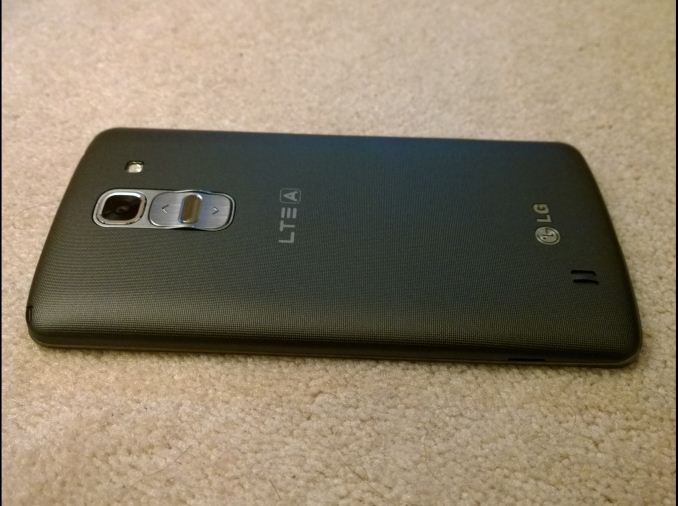 The overall shape of the phone is also very ergonomic, with smoothly rounded edges that make the shape almost identical to that of the LG G2. The bezels are incredibly thin as well. LG claims that 77.2% of the front face of the phone is dedicated to the screen, which is likely helped by the rear key design that LG is carrying forward from the G2.

Outside of material feel and industrial design, the G Pro 2 continues to use some of the very best hardware on the market today, with the MSM8974 SoC, 3 GB of RAM, a 3200 mAh battery, and a 5.9” 1080p IPS panel. I’ve made a table of the highlights below to compare it with the Note 3 and the Optimus G Pro. I should also note that before the review I was sure that the G Pro 2 was running 8974AB as that would be the latest SoC available for the MWC timeframe launch, but based upon some tests it never reaches a 550 MHz GPU clock.

As seen by the table, the G Pro 2 is a direct competitor to the Galaxy Note 3, and outside of the OIS on the camera, a larger display, newer SoC, and no Wacom stylus, they’re almost identical. There’s definitely very little in the way of differences in core specs, so the tertiary characteristics become far more important. LG is trying to differentiate their hardware with things like the 1 watt speaker on the back, and the use of G-RAM to enable panel self-refresh for better battery life.

LG is doing more than just hardware differentiation though, software is becoming increasingly important to them. Some of the key software features that the G Pro 2 pushes are a software-based addition to OIS, “KnockCode”, flash for the FFC, “Magic Focus”, “Natural Flash”, “Mini View”, “Content Lock”, and “Dual Browser”. I’ll get to the camera features later, but KnockCode should definitely be at the top, especially because LG’s entire presentation on the G Pro 2 and other devices strongly emphasized KnockCode. While it was presented in a rather silly manner, KnockCode is actually quite good, and a logical evolution of the KnockOn feature found in the G2. It’s great to be able to unlock the phone without ever turning the display on, and LG’s implementation of the feature has no major issues to talk about.

The Mini View feature is also good, but I’m not too sure that this is the fix for those that don’t want a huge phone. Rather, it is a workaround for the sheer size of the formfactor when only one hand can be used. The window can be resized, and the window is created when the on-screen buttons are swept from one direction to another. 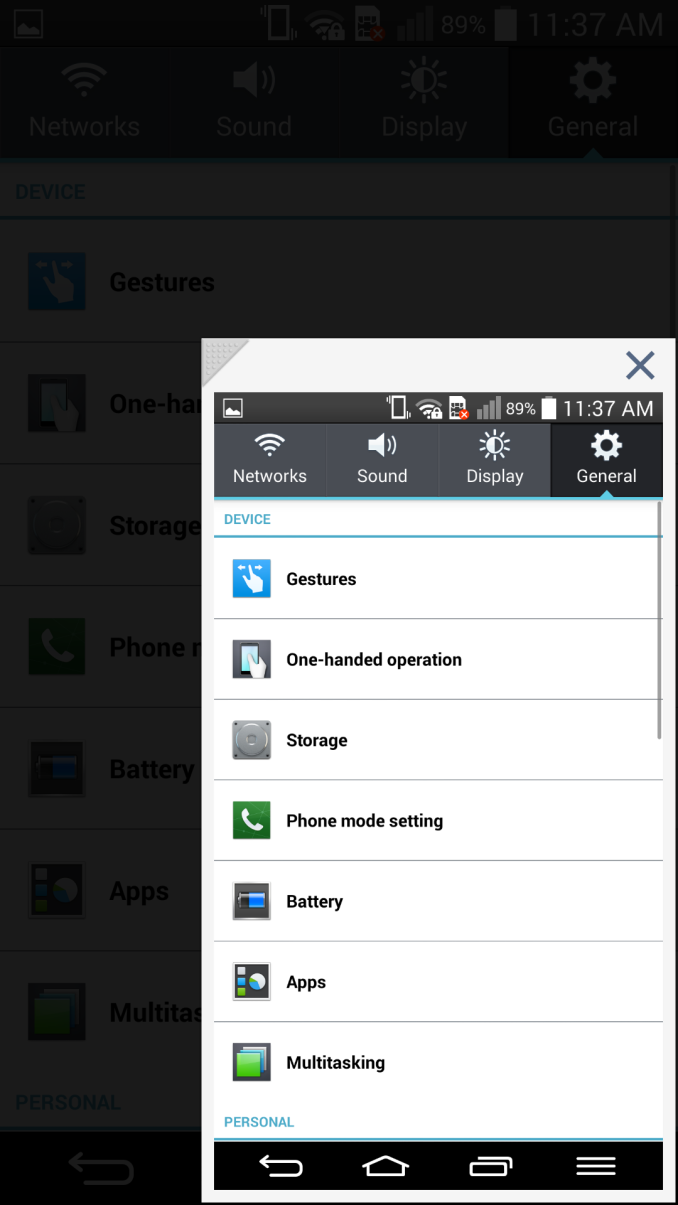 One feature that LG hasn’t really been talking up is Slide Aside, which is effectively a way of saving up to three applications to view at a later time. I’m not quite sure how valuable this is, especially because the multitasking menu effectively does the same thing, although it’s admittedly not as consistent in saving application states. 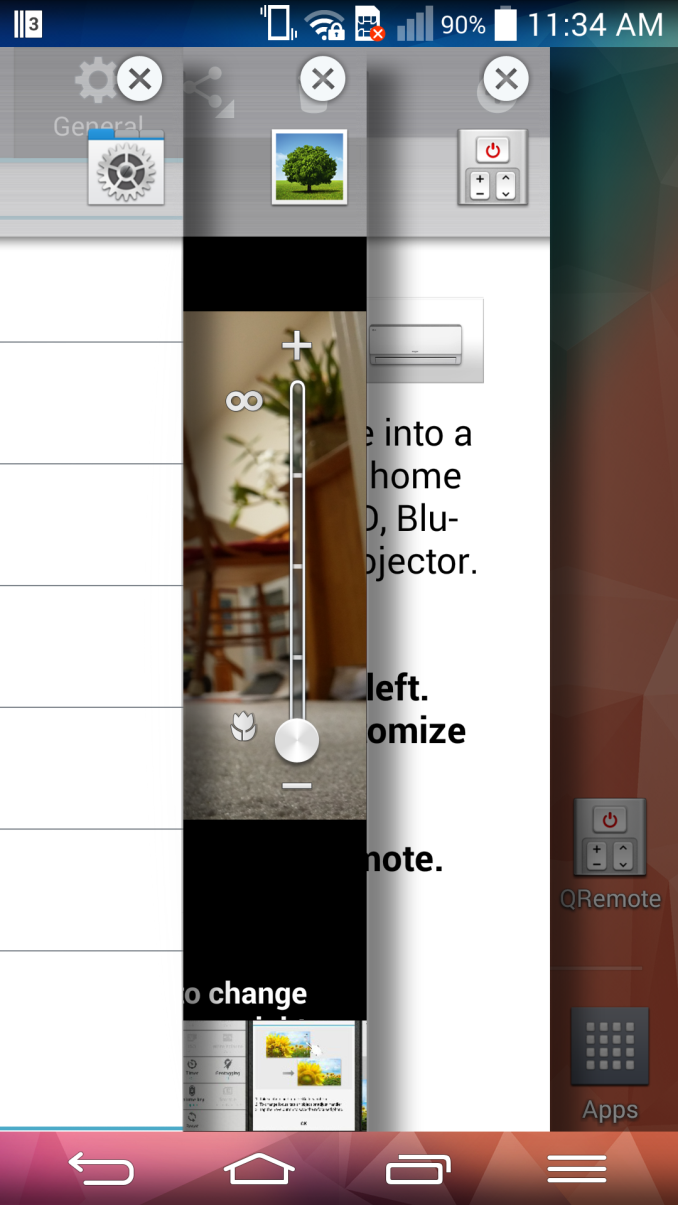 Outside of the new features that LG is pushing, the UI is mostly the same. Out of the box, LG continues to leave QSlide and volume sliders/brightness sliders in the notification drawer to take up half of drawer, although all but the quick settings can be removed to tidy things up, as seen below. 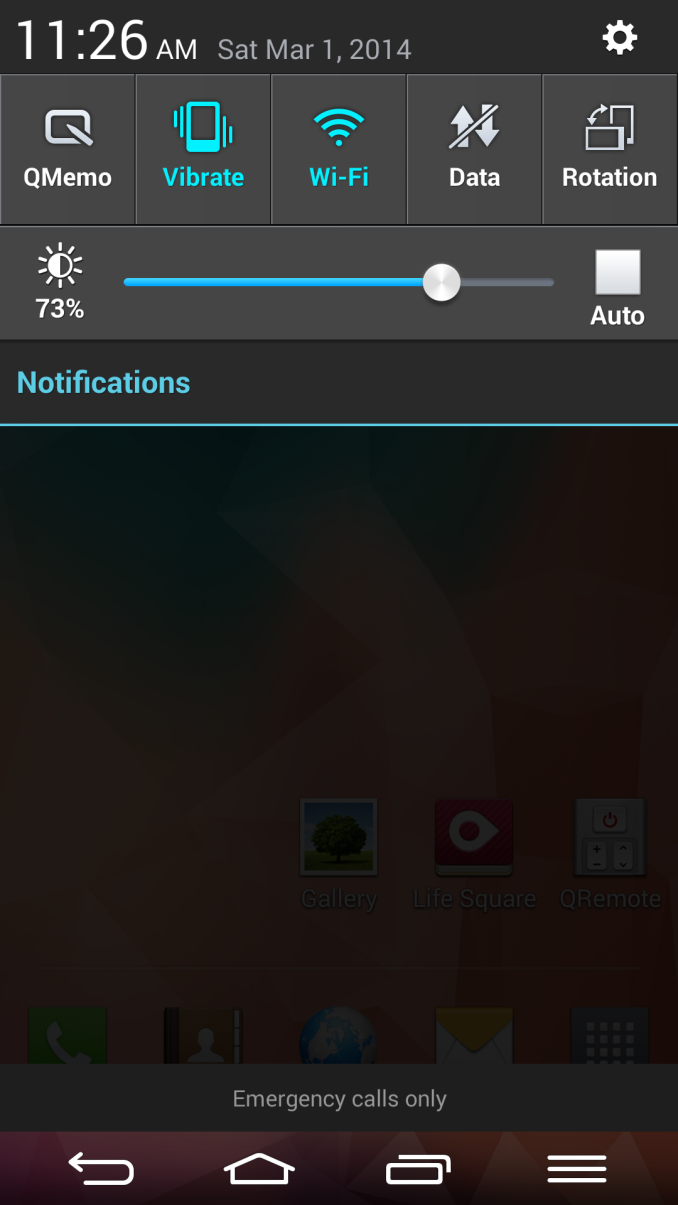 The settings drawer in the tab view is logically organized and the ability to actually swipe from one tab to another instead of tapping the tab on top of the display helps a lot, as does the ability to convert the settings application to a single scrollable list, although I noticed that some settings go missing when this is done, such as modifying the front display keys. 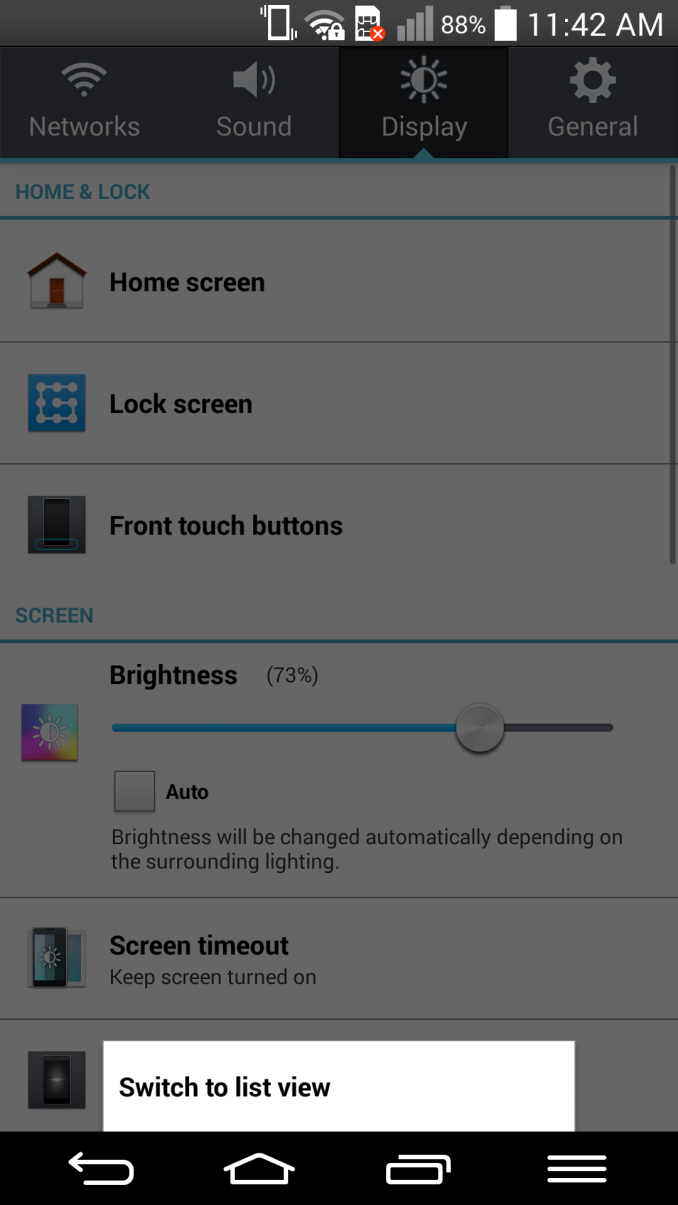 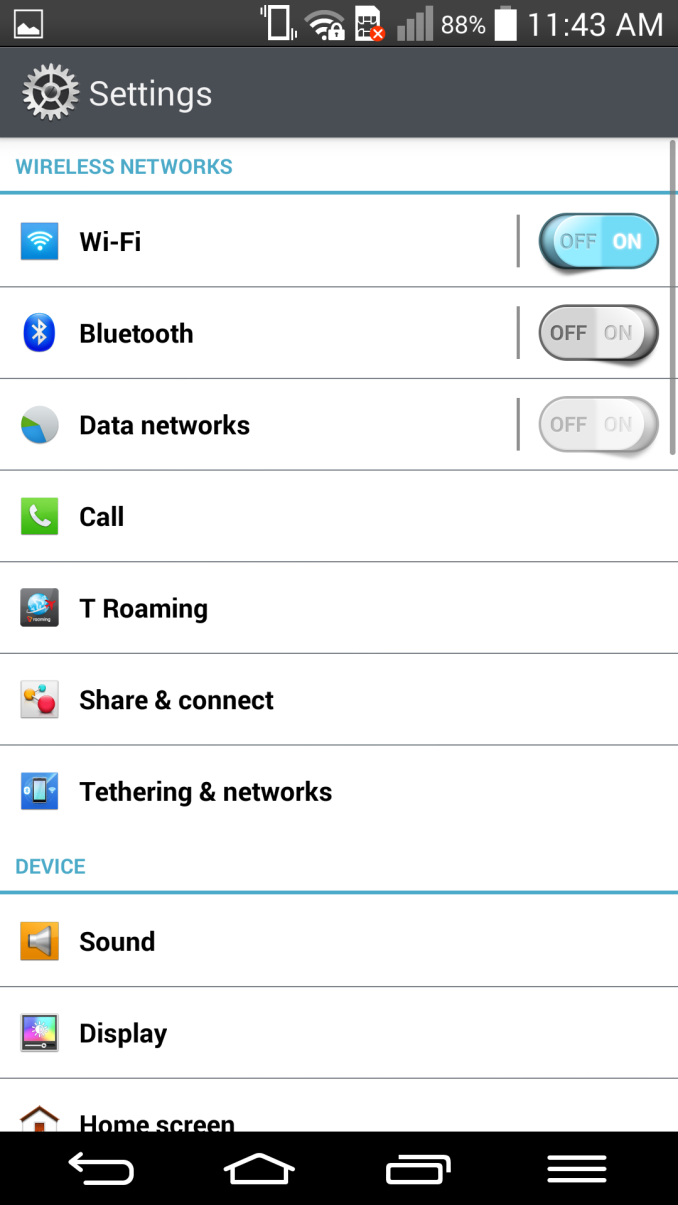 The dialer and the contacts aren’t really much to talk about, and I found that those parts worked just fine, although it certainly shares quite a bit with TouchWiz when it comes to visual design. The launcher was smooth and there really wasn’t anything out of the ordinary when it comes to how LG’s UI is made. It’s almost identical to the one in the LG G2, and I wouldn’t expect this to change too much any time soon, although based on Samsung’s changes to TouchWiz I would guess that the Korean OEMs may be shifting their visual styles soon.