Having seen the gaming performance of the 280X Toxic, let’s move on to power, temperature, and noise to get a better look at the performance characteristics of Sapphire’s Tri-X cooler. This will also give us a chance to evaluate the costs of Sapphire’s significant factory overclock with respect to power consumption.

At the base GPU clockspeed of 1110MHz Sapphire is able to stick to 1.2v for their GPU voltage, but to boost up to 1150MHz they have to go to 1.256v. This is high for a Tahiti chip, and although still in the safe zone for something with this large an air cooler it is reaching about as high as we like to take Tahiti while maintaining longevity. 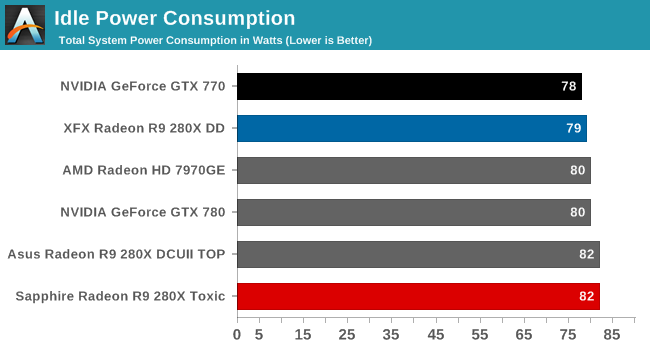 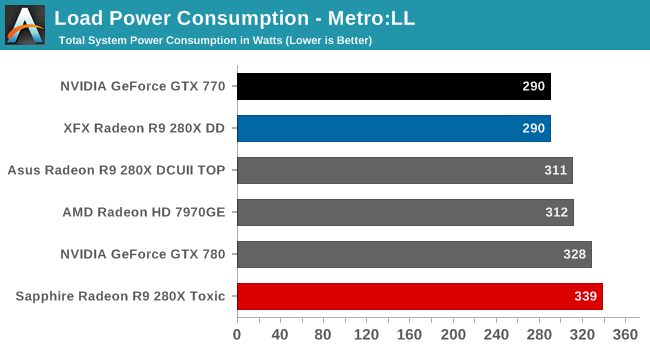 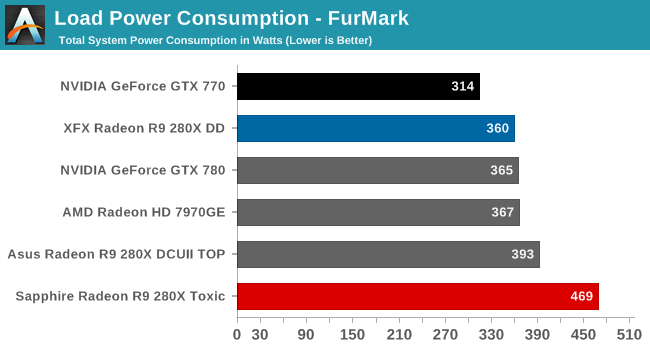 With the increased clockspeeds and voltages, rather expectedly we see an increase in power consumption. 339W (at the wall) under Metro is nearly 50W more than the stock 280X, and still 28W more than the overclocked (but not overvolted) Asus card. In fact it’s more than even the GTX 780, a card that still beats the 280X Toxic in our benchmarks.

FurMark shows a similar trend, with the 280X Toxic sustaining a load over 100W more than the stock 280X, or the GTX 780 for that matter. Sapphire has clearly set the PowerTune limit on their card higher in compensation for the amount of power a higher clocked, higher voltage GPU will take, and they have the cooling to back it up, letting the card draw this much power and sustain it. FurMark is a pathological case and gaming power consumption will be much closer to the Metro scenario, but it does show how high the Sapphire card can go under extreme load.

Consequently it’s clear that Sapphire has regressed some on the power curve to hit their performance targets. 1150MHz is unquestionably outside Tahiti’s sweet spot, so there is a significant power penalty to pay to get there. 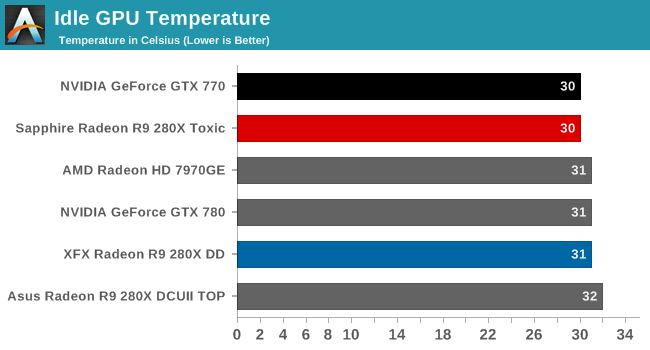 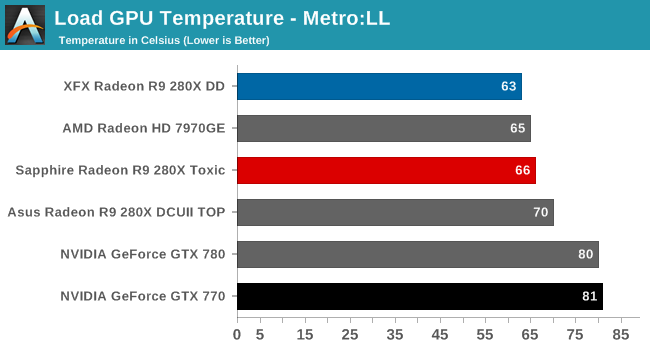 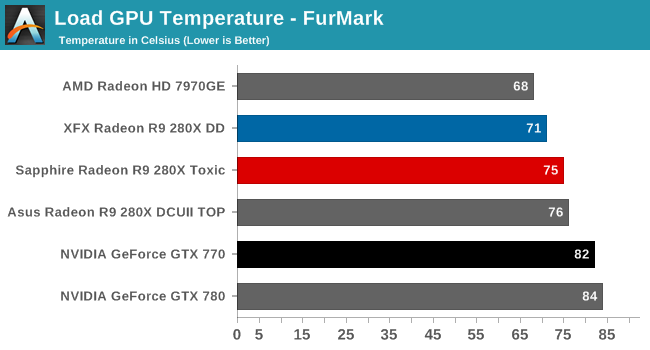 Considering the power numbers we just saw, Sapphire’s Tri-X cooler is earning its keep and then some. 66C under Metro is doing quite well for an open air cooled card drawing this much power, and the fact that FurMark temperatures only go to 75C despite the extreme power load there only further proves that the Tri-X cooler is up to the task for the Toxic. In spite of the high power draw, the card will have no trouble keeping up. 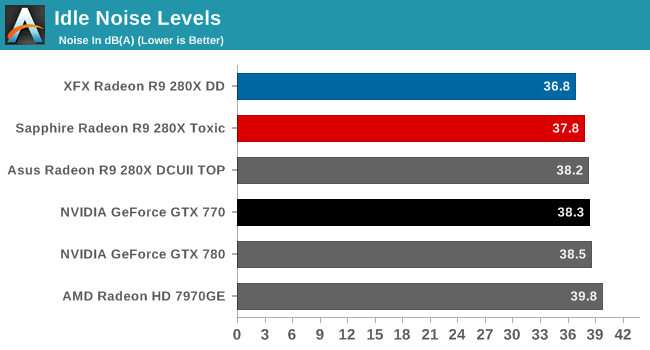 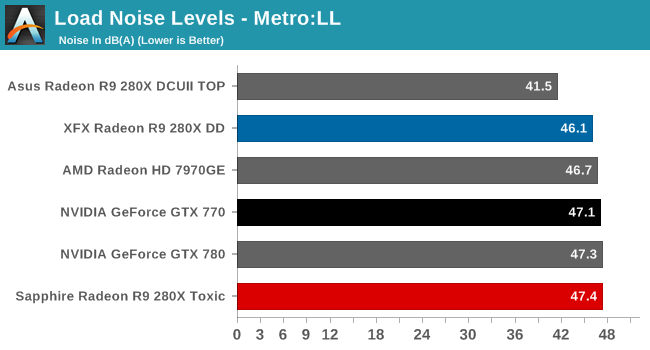 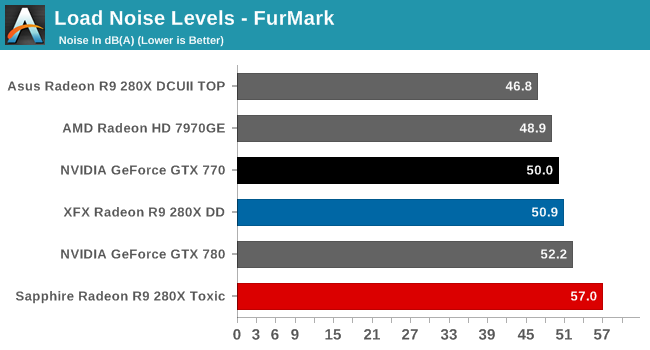 Finally our look at noise is something of a mixed bag for the 280X Toxic. The noise levels under Metro aren’t bad, but they’re also not great. At first glance Sapphire’s fan curve may be a bit aggressive, which is why we have 66C temperatures next to a 47dB(A) noise level. Next to the stock-clocked XFX card that’s a negligible increase in noise for a 13% performance increase, but the Asus card is something of a spoiler here. Asus in comparison gave up some cooling performance in exchange for lower noise levels and it shows. Sapphire could likely stand to be a bit less aggressive on cooling and bring those noise levels down, at least going by the conditions and results in our testbed.

FurMark on the other hand is outright loud, again going back to just how much power this card can draw when given a pathological use case and allowed to run free. I’m not sure if Sapphire could get away with a less aggressive fan curve here given the 75C temperature that goes with this noise level. Our testing methodologies don’t capture noise levels for other games, but based on our testing experience I don’t expect the card to get anywhere close to this under any game load, as those have always reflected what we see with Metro. Distributed computing/Bitcoin users likely wouldn’t be happy with this card though.

Ultimately Sapphire’s Tri-X cooler performs well under load here for typical workloads, and at least can easily keep up with the Toxic’s high power consumption under extreme workloads. The mixed results here ultimately come down to power consumption rather than the cooler itself.