The second card in today’s roundup is Gigabyte’s GTX 770 OC Windforce 3X. As has become the case for Gigabyte in the past year or so, their factory overclocked cards are focused on bigger and better, typically packing larger coolers and higher factory overclocks than the comparable cards from other vendors, and the 770OC Windforce lives up to this standard in full. 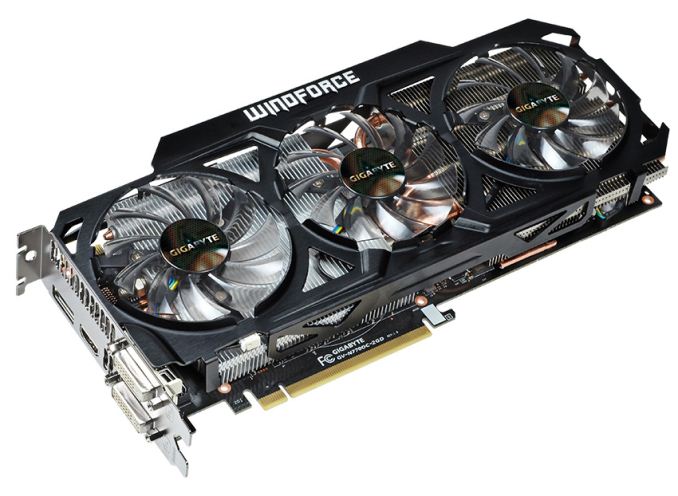 The 770OC Windforce is a fully custom card, pairing a custom Gigabyte PCB with Gigabyte’s high end Windforce 3X cooler. As far as clockspeeds go the 770OC Windforce ships with a sizable factory overclock (falling just short of the MSI GTX 770 Lightning), shipping at a core clock of 1137MHz, 91MHz (9%) over the stock GTX 770. It should be noted however like all of the other cards in today’s roundup, the 770OC Windforce does not ship with a memory overclock, so any performance gains must come solely from the core overclock.

Breaking down the construction of the card, Gigabyte’s Windforce 3X cooler, the largest of the company’s line of Windforce coolers, ends up being an inch longer than their custom PCB for this card. As a result while the PCB measures 10 inches, the cooler itself sticks out a further inch, pushing the total length of the card to 11 inches. Consequently the card has a definite “oversized” aspect to it, due to both the heatsink hanging off the rear and the company’s Windforce banner sticking up above the card. Though despite the oversized cooler the construction on the card is quite rugged thanks to a stiffener that runs the length of the card and is mounted to both the heatsink and PCB at just the right points, showing how far Gigabyte and some of the others have come in the last couple of years on build quality for their open air cooled cards.

As far as Gigabyte’s custom PCB is concerned, the company isn’t doing anything particularly exotic here. But for discrete components the company is once more using their Ultra Durable VGA components, which guarantees the use of solid (ferrite core) chokes, Japanese sourced solid capacitors, and low RDS MOSFETs in the name of improving efficiency and overclocking stability; though with a 230W card, it’s hard to imagine Gigabyte going with anything else in the first place. On a side note, Ultra Durable VGA branding also guarantees the use of Hynix or Samsung GDDR5 RAM, however in the specific case of the GTX 770 Elpida/Micron is not yet shipping 7GHz RAM anyhow.

Moving on we have Gigabyte’s Windforce 3X cooler and “triangle cool” based heatsink. This is Gigabyte’s highest end cooling configuration, and while Gigabyte’s claimed 450W capacity isn’t something that’s testable on this configuration it’s clearly an oversized cooler for the 230W GTX 770. The Windforce 3X cooler has 3 75mm fans pushing air along the card, and in practice results in most of the front surface area of the card being made of fans.

Meanwhile the 770OC Windforce’s heatsink is equally oversized, being composed of two segments that run the full 11 inch length of the card, and implement Gigabyte’s “triangle cool” heatsink technology to reduce fan turbulence. 6 copper heatpipes run between the heatsinks and the GPU for transferring heat, and furthermore a simple aluminum baseplate covers the RAM and other components immediately near the GPU, transferring heat to the heatsink directly above. A baseplate also covers the MOSFETs that are part of the primary VRMs, similarly connected to the other heatsink segment above those components.

Moving on, like the other cards in this roundup Gigabyte implements NVIDIA’s standard display I/O configuration of 2x DL-DVI, 1x HDMI, and 1x DisplayPort 1.2. Similarly, with a 230W TDP the card requires the typical 6pin + 8pin external PCIe power connectors, for additional power.

Gigabyte rounds out their package with their OC Guru II overclocking and monitoring software. OC Guru II hasn’t changed much since we’ve looked at it last year; it’s not gold standard software due to some of the clunky interface choices Gigabyte has made – mainly a lack of sliders – but it is competent at its task. OC Guru II offers the full suite of monitoring and overclocking controls we’ve come to expect, including the ability to overvolt (unlock restricted boost bins) on GTX 770.

Finally, as with all of Gigabyte’s North American cards, the 770OC Windforce comes with Gigabyte’s standard 3 year warranty. More enticing however will be the card’s MSRP. The price premium Gigabyte is charging for the highest factory overclock in today’s roundup? Nothing. Gigabyte has set the MSRP of the card at $399, identical to the MSRP for the stock GTX 770 itself, meaning the factory overclock is effectively free. We’ll give the card a full performance rundown in our benchmark section, but so long as Gigabyte doesn’t stumble here they’ve setup a very tantalizing situation, as a 9% factory overclock at MSRP would be very difficult to pass up.