We've reviewed a healthy number of peripherals from Logitech, Corsair, SteelSeries, and others, but our coverage of Razer's kit has been pretty slim. Razer is one of the biggest and most respected gaming peripheral companies in the business, and they took umbrage at the fact that they hadn't been featured up to this point. So much so, that they sent along two of their finest keyboards and their brand new gaming keypad.

In a recent roundup I mentioned what I considered to be the one serious flaw of Razer's portfolio: their Synapse 2.0 software. Razer's approach to software isn't uniformly bad; having a unified software suite for their products is good, and being able to synchronize settings to the cloud is a welcome feature. But the Synapse software has two dire shortcomings: it requires a Razer account, meaning you have to log in to the software every time your system boots up, and its update process is onerous at best. It seems like no matter what version of Synapse you download from Razer's servers, it always has to go through a long and drawn out update period, and heaven help you if you plug in any new Razer peripherals. You'll likely have to restart your system after installing them as well. Synapse has a lot of polish, but let me put it another way: if you can update your video card drivers without having to reboot, why should you have to wait so long for updates to install for your keyboard, and then reboot after?

Backlit with Razer's trademark green, the Blackwidow Ultimate shows tremendous promise. This is an extremely sturdy, attractive keyboard, with several levels of backlighting adjustment, a USB 2.0 port on the right side, and a harness for headphone and mic pass-through. If nothing else, it proves that Razer can definitely do industrial design right; it's easy to see why Vivek's a fan.

While I prefer having an optional wrist rest, I think the Blackwidow Ultimate's major failing as a gaming keyboard is the use of Cherry MX Blue switches. No amount of macro recording, gaming modes, backlighting, and so on can really change the fact that for the vast majority of users, Cherry MX Blues are one of the worst mechanical switches for gaming. I adore them for typing text, but the amount of actuation force that Blues require makes them poorly suited for any game that might require quick input and especially double tapping. This is something that's going to be a matter of preference for a lot of users, but there's a reason Blue switches are rarefied in gaming keyboards. Under the circumstances, I'm still inclined to stick with my old recommendation of the Corsair K70 and K95.

My first inclination is to compare the DeathStalker Ultimate to Logitech's flagship G19s keyboard; they both feature color LCD displays with custom user interfaces, and they both make the same fatal mistake. I'm much, much more forgiving of the DeathStalker Ultimate, though; what you're essentially looking at is, at worst, a gaming keyboard with a touchpad built in. Razer's Switchblade UI interface allows for dynamically changing the icons and functions of the ten keys above the display, and in turn also allows you to use the display for different functions. Its default function is to be a touchpad, but you can use it as a web browser, media player, Facebook or Twitter client, calculator...it goes on. 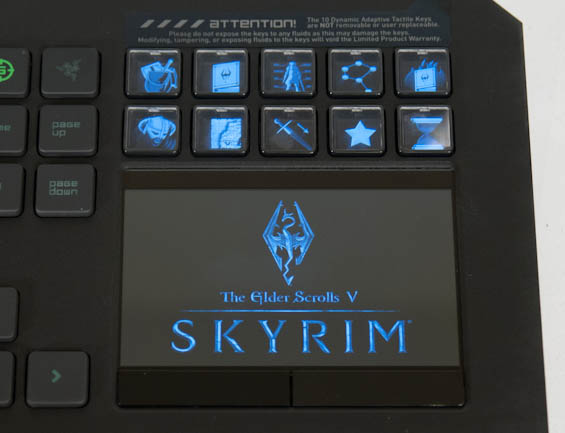 Where I think Logitech's G series UI has Razer beat presently is in third party support; I played with the available Skyrim applet which was fantastic for shortcuts, but doesn't really make use of the touch display except as...a touchpad. It doesn't display any useful information. Additionally, the list of available applets for Switchblade is pretty spare. Razer really needs to step their game up in terms of developer relations.

I'm also really underwhelmed by the keyboard itself. $249 for a membrane keyboard is a very bitter pill to swallow, Switchblade UI or no. People willing to spend $249 on a keyboard are liable to be willing to spend the extra scratch to get one with mechanical switches. Where I do think Razer has a slight edge is that the chiclet keys are very shallow; the DeathStalker Ultimate fares a lot better at the quick taps that the Cherry MX Blue switches hinder the Blackwidow Ulitmate with. If you're strictly gaming with the keyboard, then it definitely gets the job done.

The problem is trying to do just about anything else with it. There's definitely an adjustment period with the DeathStalker Ultimate, but the keys just don't lend themselves to a very enjoyable typing experience. This is like a slightly deeper laptop keyboard. The chiclets make sense for style and matching the Switchblade UI, but they really are lousy for productivity.

Still, Razer gets a lot of points for doing something different. Logitech's G600 MMO mouse was too big and unwieldy for me but found a very happy home with a friend, and I think the DeathStalker Ultimate is another one of those products that just needs to find a good match. I can see this being a borderline ideal keyboard for some users, and it's entirely possible I'm off base with parts of my assessment. I just can't help but feel that Razer, like Logitech with the G19s, is scratching at the surface of producing the ultimate gaming keyboard but not quite willing to make that jump yet. 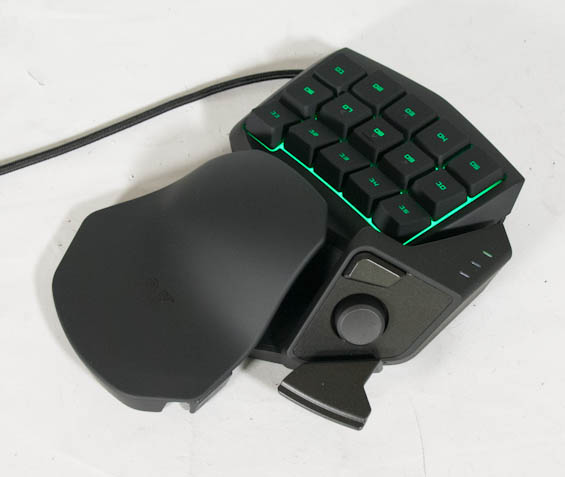 A product like the Tartarus is difficult to evaluate because it's really very niche. The keyboard and mouse initially existed as ways to control games because, well, they were what happened to be connected to the PC. PC gaming evolved to exploit the advantages of this control scheme, and the peripherals themselves evolved in kind. Keypads like the Tartarus (and its predecessor, the Nostromo) attempt to specialize the keyboard half of the traditional PC gaming setup a bit more, but results are mixed.

Gaming keypads require a heavy adjustment period. I have a friend who swears by his Nostromo and actually has trouble adjusting back to using a conventional keyboard for gaming; I personally have a harder time making the adjustment. If I'm going to invest in the time it takes to adjust to using a new peripheral, it needs to be worth the transition, but something like the Tartarus only gives you more input options if you use the thumbstick and buttons. If you don't, you're actually down keys.

It's comfortable enough in the palm (the palm rest itself is adjustable, capable of sliding on one axis closer to or farther from the keys), and I find the membrane switches a bit more forgivable than on a full keyboard. For some users, the Tartarus will shine. Certain gamers, but I also know that a lot of art students will use a keypad like this in conjunction with a Wacom Cintiq and program it with Photoshop shortcuts. Either user will be very happy with the Tartarus, but it's difficult to recommend. Some users will become true believers, but some, like me, will probably just be happy to stick with their gaming keyboards.