Bitcoin is a topic at AnandTech we have carefully steered away from due to the ever changing state of the market and the opinions of that market.  For those that follow either Jarred or I on twitter, you may have seen our various tweets regarding the state of affairs and our modest Bitcoin mining adventures, and recent news regarding Mt. Gox developments with the US Government obviously do not help the situation, causing various rises and falls on the virtual currency.

The big thing over the past twelve months in the land of Bitcoin (apart from the $260 high) is the evolution of hardware geared towards mining the virtual commodity.  From humble CPU throughput beginnings, the hashing algorithm used has been taken through GPUs due to its parallelism (in particular AMD GPUs) to FPGAs and now ASICs (Application-Specific Integrated Circuit).  To put this into perspective – CPUs, GPUs and FPGAs are designed to be programmable and take on various calculation methods, and ASICs are good at one thing only.  In this case, the hubbub about ASICs are their strong hashing power and low power usage, although after buying one it is highly unlikely you would be able to sell it to do anything else.

The issue with introducing ASICs to Bitcoin is such that the higher total hashing power of the Bitcoin Community, the harder it gets to generate part of a Bitcoin (without outright purchasing) with the same individual power.  Assuming the global value of Bitcoin stays the same, it is the proportion of the total hashing power that determines your output.  In a mindset of every man for themselves, the more you invest in hashing power, the more of a proportion of the total hashing power you have and thus the more ‘money’ you can earn.  (At this juncture I would like to add that it can be a fool’s errand to enter the Bitcoin game purely on the suggestion that you can earn your money back – at current rates buying a high end GPU will take over 12 months to pay off after electricity prices, even more with increasing hashing power.)

Nevertheless, there are users willing to develop ASICs and sell them on to others.  The three main names in ASIC development so far have been Avalon, ASICMiner and Butterfly Labs.  Avalon are producing several batches of ASICs for users willing to invest, with the 3rd batch of 600 units being sold out (at a then-price of $7500+ each) within 15 minutes of going on sale.  ASICMiner have developed hardware and then sold shares in them, running the ASICs at a local facility and paying a dividend based on their total output (up to 30% of the entire network).  Butterfly Labs have had an up and down past, missing their initial release dates and power targets, and despite taking orders and pre-orders from day one, are almost a year behind pre-orders on various models.

Addendum: BFL got in touch to confirm the statement above.  Josh from BFL has confirmed that the first units were scheduled to start shipping in November 2012 but began shipping in April 2013, a time frame of six months, not twelve as originally stated.  We apologize for this error.

Coming into the ASIC market is CoinTerra, headed up by Ravi Iyengar, former CPU Lead Architect at Samsung’s Austin Research Center (SARC).  Ravi’s focus at SARC was on the CPU Mid-Core, including integer execution and special purpose registers (good for Bitcoin).  His history also includes helping design chips for the SGS4, as well as stints at Intel, Qualcomm and NVIDIA.  At CoinTerra he is joined by Jim O’Connor, VP of Engineering with a history of SOC design and Dr. Naveed Sherwani, CEO of Open Silicon.  CoinTerra has raised $1.5 million from investors to fund development costs and an initial production run.

CoinTerra’s first high-end product for launch is listed as a 2000 Gigahashes per second Bitcoin miner (or 2 TH/s), powered by four 28nm ASICs running at 500 GH/s each.  These would be housed in a 2U air-cooled container, and draw up to 1200W (estimated) for 0.6 W/GH/s.

Thus projecting a 0.6 W/GH/s number from CoinTerra is almost out of this world, offering almost a factor 10 better efficiency than any other ASIC shipper today.  Part of that comes from the process node (28nm vs. 65nm/110nm), but one would assume that an element of design it also prevalent.

CoinTerra’s product has an initial 3 month lead time, and has a high starting threshold: $14000.  Despite this, at current rates, a user would earn $54000 worth of Bitcoin in a month, although there is no prediction as to what the Bitcoin difficulty (or market rate) will be in three months.  CoinTerra plan to drop 2000 TH/s of power in December, despite the global hashrate of only 500 TH/s now.

Clearly my first response to such claims involved several double-take moments, but CoinTerra’s CEO, Ravi Iyengar, was happy to speak to us and answer a few questions. 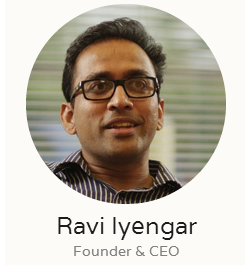 Q: Can you give us a little background in CoinTerra?

A: We started the company in April – I was approached by a couple of people to start and lead the engineering for a Bitcoin mining company, and at the time I had no real idea what Bitcoin was.  I studied the ecosystem and looked at the competition – Bitcoin ASICS seemed a relatively ‘new’ industry, and it seemed that now was the right time to be one of the best.  Having spoken to the big names in chip manufacturing like LSI/Intel, it was clear that right now the total Bitcoin market value is small, but they are watching.  The purpose of CoinTerra is to be a well-established entity by the time the big players decide they want a slice of the action.

Q: At what stage of the process are you in terms of product design/manufacturing?  Can you explain a little behind the iterative manufacturing process that CoinTerra is taking?

A: We are currently in the Physical Design stage now, and we are targeting tapeout around October – the silicon is expected to arrive for system building in December and ship the same month.  Our initial ASIC design is fully complete, we have AESAustin on board to building the boards and systems, a company called Conformal is doing the software, and Open Silicon has advisors at CoinTerra.

A: When we started looking for investment, it took two months to raise $1.5m from both Bitcoin users and the tech industry – at this point in time there is no need to ask for more investment.  In terms of pre-orders, within 24hrs of our website going live we had 150 pre-orders.  Our production is not hampered by sales in any way.

Q: Butterfly Labs have announced a similar 28nm product shipping around the same time frame in a PCIe card type-form factor.  Are they reselling your product?

A: There is sometimes a difference compared to PR and what happens – I was under the impression that BFL would be shipping around February.  But I would be surprised if there are any new mining startups from this point on without a significant background in the area.  Our funding came through as a result of the background of the team, despite this being my first company, and the contacts I have helped move our product to start at 28nm, rather than the ~110nm node that the initial companies in this area started with. For example, Dr. Timo Hanke is lead cryptographer but also early investor.  For us, 28nm was not really bleeding edge, and a good place to start.

Q: By my calculations, a 2TH/s machine at $14k would earn back its share in Bitcoin in little over a week at current rates.  Why have you chosen to sell your ASICs rather than do something similar to ASICMiner and design the infrastructure to sell shares in your systems?

A: The concept the selling of shares is blurring a legal line, especially in the US.  We are not sure if that model is possible within our boundaries.  There is also the issue regarding dealing with Bitcoin and converting to cash, thus becoming a money service.  We do not want to be in any grey area, and we want to be clear with our business model.  The goal of CoinTerra is to be a hardware product company first, rather than a base for Bitcoin distribution.

Q: What made you jump into the Bitcoin ASIC arena and start CoinTerra?

A: I have been in the corporate world for 15 years, first at Intel, then NVIDIA, Qualcomm and Samsung.  My career was stable, good money etc., but I always had that entrepreneurial spirit, and wanted to do something big that changes the landscape of an industry.  Starting CoinTerra was the opportunity.  There is huge potential in terms of CoinTerra’s impact, especially in the financial terms of Bitcoin.  I realized there is huge potential to be among the top – Bitcoin is a very intense industry to be in, but very exciting.  I have been involved in chip ‘arms races’ before, to get products out quickly, but the intensity of Bitcoin is a much faster pace.

Q: Should 28nm products hit the market in the intended timeframe, what is the future course for CoinTerra?

A: Due to the level of engagement with our partners, we are confident that December is the due date.  No-one can claim a 100% release date (even Intel/Apple), but we are on track.  Long term, we would like to churn out more of our 28nm products for several quarters, and longer term we want to be seen as a cryptography based company rather than just a Bitcoin company.

Q: Could you explain more about your 2TH/s miner - the design (motherboard with GPU devices), the interface (OS, mining software preferred) and the shipping methods/regions.  If you have any CAD mockups of the hardware, this would be great.  Is 500 GH/s per ASIC realistic? 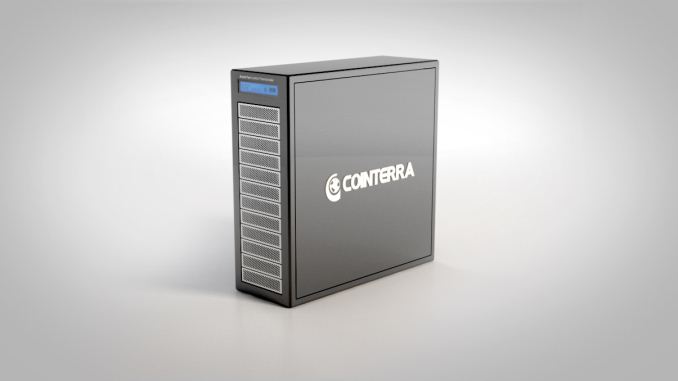 Q: A breakdown of the GoldStrike1 ASIC in terms of total transistors for computation vs. control would be some awesome statistics to have.

A: Control logic is less than 2% of the die – we are simply using efficient SHA pipe replication.  The main issue is the thermal density – our chips will consume 250W for 300 mm2, compared to CPUs that use 130W for 220mm2.  We have a company designing the cooling solution (AESAustin), and they have many years of experience in this area, dealing with ASICs that consume more than 350W+.

Q: Finally, how do you assuage feelings from users who have wanted ASICs but have been stung by long wait times?  Will you be having regular updates with the community regarding the status of the products?

A: We plan to have a blog and have a person assigned to communicate to purchasers.

Many thanks to Ravi for his time.

If CoinTerra can push out their expected 2000 TH/s by the end of the year, there is a big change coming to the Bitcoin mining world.  Given that Ravi already mentioned 150 orders for their 2 TH/s machine in the first 24 hours of the site going live, that would already be enough to almost double the global hashing power.

Should we get a unit in to test and review, it would be an interesting look at the future of Bitcoin.