MSI’s software package for Z87 is a mixture of old and new, and we do not get many different options between model segmentations (channel, gaming, OC), meaning that our software explanations are identical to that of our previous MSI Z87 motherboard reviews.

From our testing, the stalwart of the package, Live Update 5, is still present in all its glory.  So far in terms of auto-update packages, MSI’s was the first to reach an echelon worthy of an update package that informs the user and applies the updates.  Other manufacturers are now getting into the groove, but MSI have that initial advantage.

In terms of the new, Command Center gets a fresh update.  The new Command Center is a visual uplift from the old version, giving the user more control and a better experience in order to adjust the system – this includes a better visual of the fan controls as well.

However we start at the installation disk and not much has changed.  The interface has two main options at the top (Driver, Utility) which expand into several options below and a ‘Total Installer’ button.  This button opens up a menu whereby the user can select/deselect options (such as Norton Antivirus) to install.  I am beginning to get to a position where the Driver CD on loading should be showing information about the current setup as detected, such as CPU/motherboard numbers.  This way we can verify the hardware we are dealing with without loading additional programs or opening up the case.  Perhaps this is something easily implementable to think about for the future. 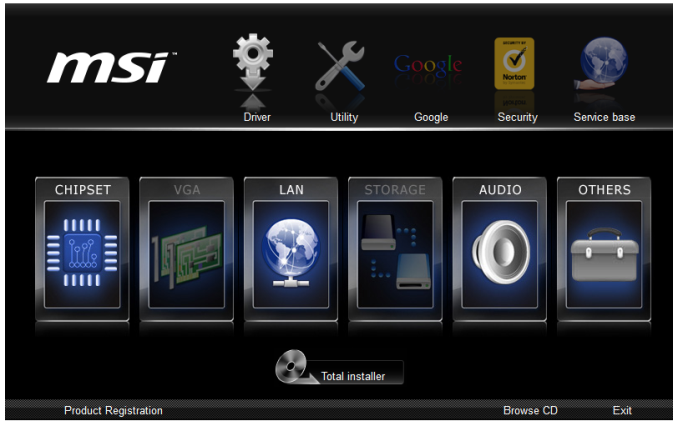 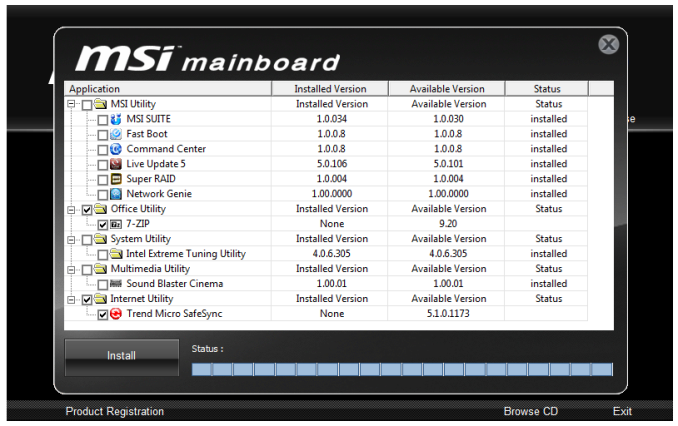 One of the first things that the user might notice on the initial installation is the MSI theme that gets applied when everything is installed.  I am of the opinion that this is a good positive move for motherboard companies, as long as the pictures are tasteful and fit.  I know a good number of users will customize an OS setup regardless, but it does provide a sense of ownership for those that leave it in the background. 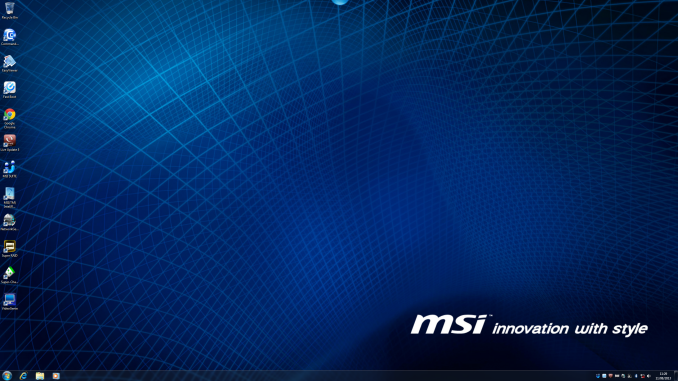 First in MSI’s lineup is EasyViewer, a replacement of Windows Photo Viewer with a few extra commands for resizing and slideshows.  Personally I use FastStone Image Viewer for my image previews (and one of our benchmark tests) as it does almost the same thing with a lot more options. 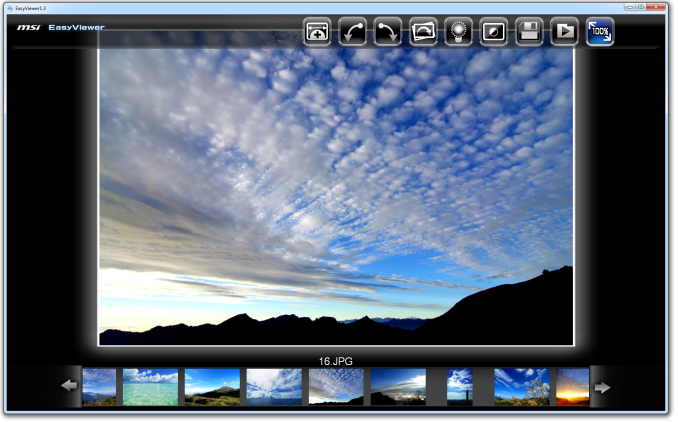 The big plus in the MSI package is from Live Update 5 (LU5).  With LU5 the system will connect to the internet, detect the current platform, get a list of available software on the MSI servers, and then compare this to the software it can detect on the system.  If there is a discrepancy in the version, it offers a download.  Alongside the software available, the system also checks BIOS versions against the latest available on the servers.  The only issue for me is that the program does not tell you the size of the download until you are actually downloading it, which could be an issue for limited bandwidth users if they end up downloading 200 MB of audio drivers rather than 5 MB of other software. 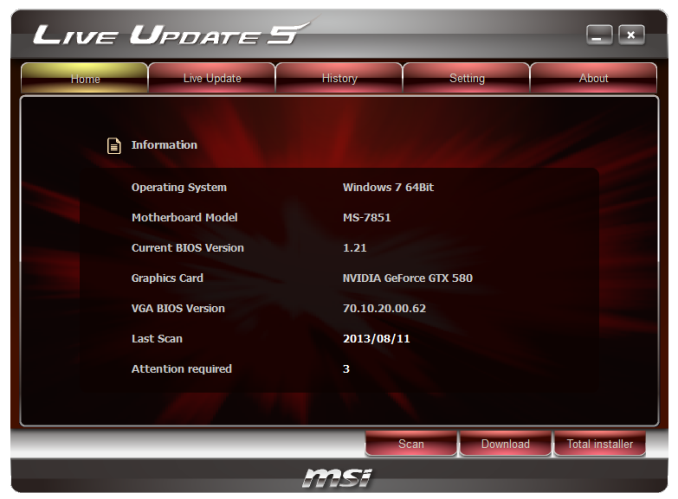 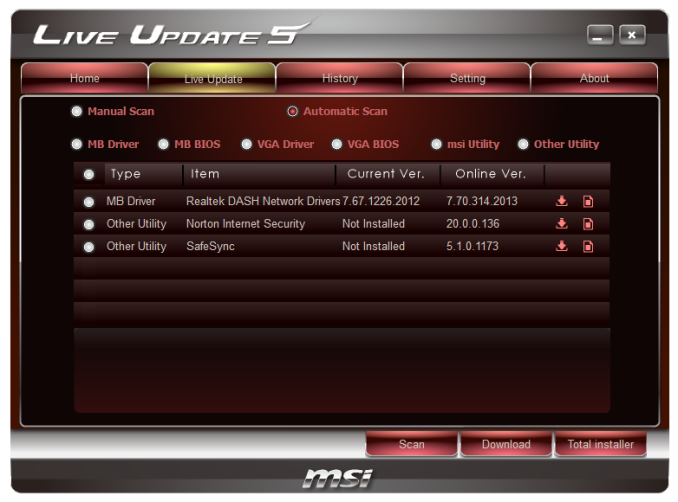 I did have one issue with Live Update 5 on this motherboard – for whatever reason, Live Update does not like to update itself.  It will try, fail, and then you are left without Live Update installed – I suggest getting the latest version from the website initially, then the rest of the updates (including new ones for each motherboard) will be offered.

Unlike the Killer NICs used on the high end MSI motherboards, MSI has a Realtek NIC on the Z87I.  Realtek provide network management software as part of the IC, which MSI have skinned in their color scheme and logo.  This software, like others, allows users to prioritize network traffic from specified applications over others, or rely on the software modes: Game, Stream, Browser or Auto. 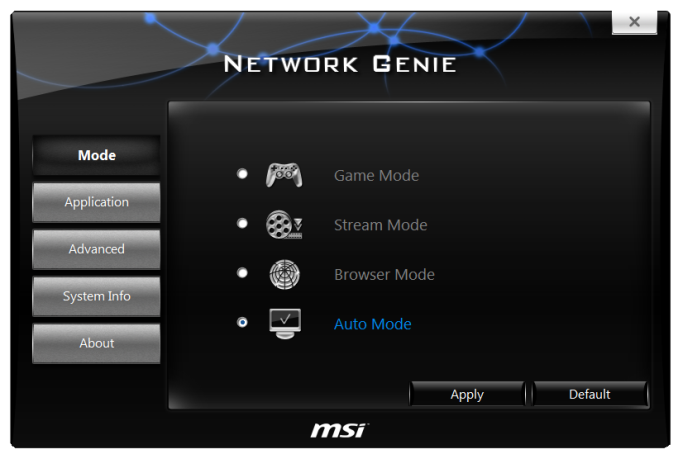 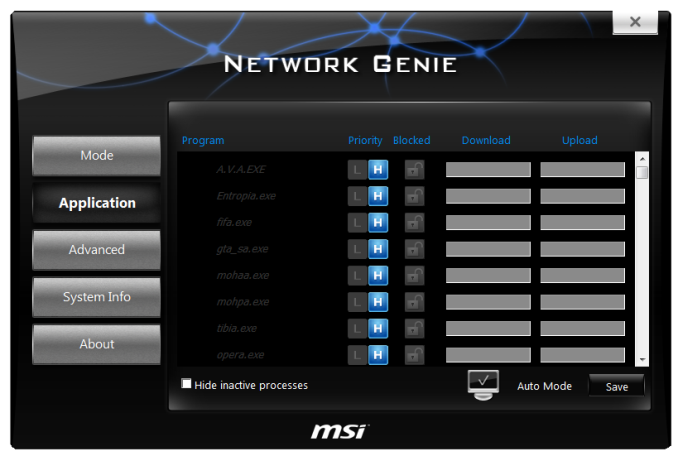 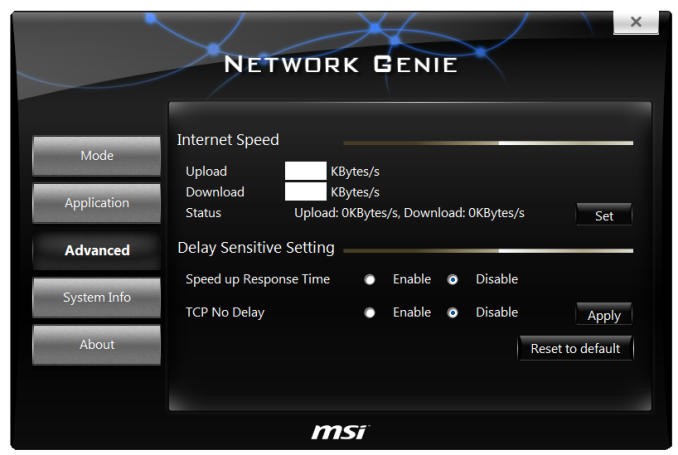 The Video Genie software is a software tool designed by MSI to adjust the monitor settings on the fly for various on-screen visuals.  Thus in a dark scene on a film it will attempt to provide more focus by making the screen contrast higher, or as shown below will attempt to adjust the screen for a more ‘lively’ feel.  This type of feature is arguably a software replacement for some of the more hardware based solutions. 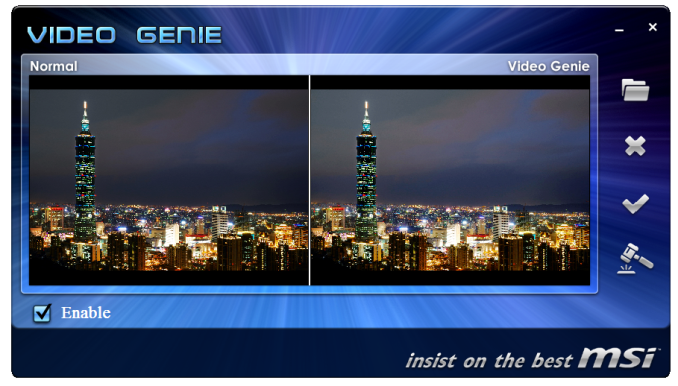 With motherboards now allowing for hardware enhancements to improve POST time to Windows 8, it can be difficult for users to get into the BIOS if the system bypasses the ‘Press F2 to enter BIOS’.  For overclockers the solution is easy with ‘Go2BIOS’ buttons now being implemented on MSI motherboards.  However if the system is in a case, there has to be a software solution, and MSI provide Fast Boot for this, with a Go2BIOS option. 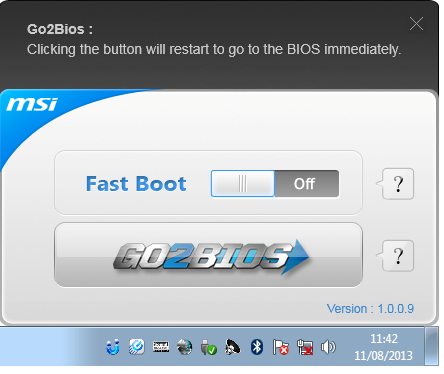 Even though the Z87I uses Realtek ALC892 audio codec, MSI have invested in Sound Blaster Cinema software in order to enhance the audio experience.  This works in conjunction with Realtek’s own audio software in terms of presets and EQ.  For our audio tests however, SBC had to be turned off in order to get a result. 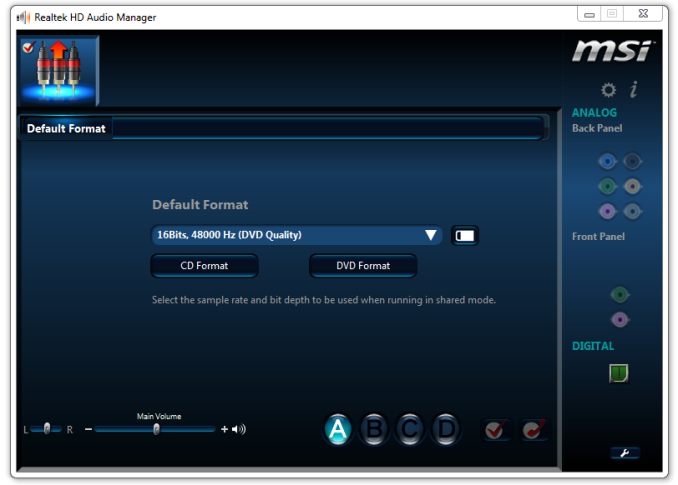 The last piece of the MSI software stack is our upgraded version of Command Center.  Previous iterations were fairly complex with lots of information in a large interface (a bit like XTU) but visually did not disrupt the user experience.  The new version of CC is of a similar ilk, however the settings are divided up to be easier to handle.  For example, here is the first screen giving simple overclock and fan control options: 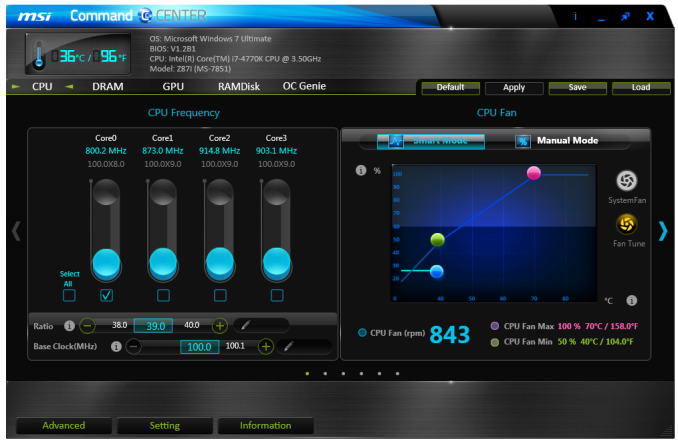 MSI have tried to split up the various sections of CPU/DRAM/GPU into menus, however users can navigate left and right – this puts CC in the firing line for an upgraded smartphone app in the future.  With CC users can adjust fan controls, overclocks and voltages.  Rather alarmingly Control Center allows users to apply 2.1 volts to their CPU immediately: 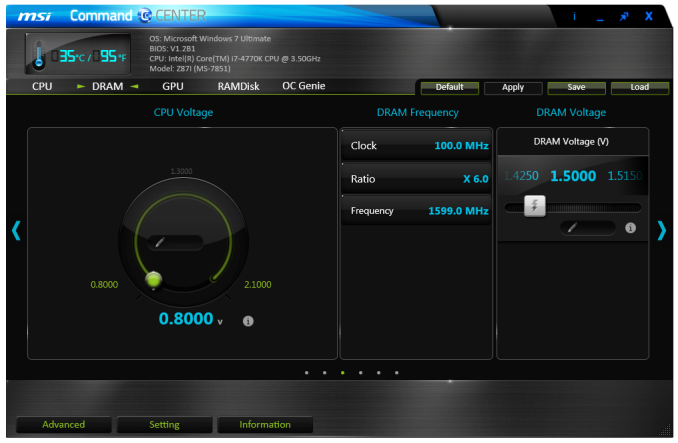 This is a large oversight.  It would have been better for MSI to have an easy/advanced mode, where the advanced mode would allow voltages only extreme overclockers on sub-zero cooling would use.

A new element to CC is the addition of RAMDisk software, similar to ASRock’s XFast RAM:

If a user has a large pool of memory to use, any amount could be used to open up a RAM Disk and use it as a cache for some of the more readily used programs, such as web browsers, temp files or even page files. 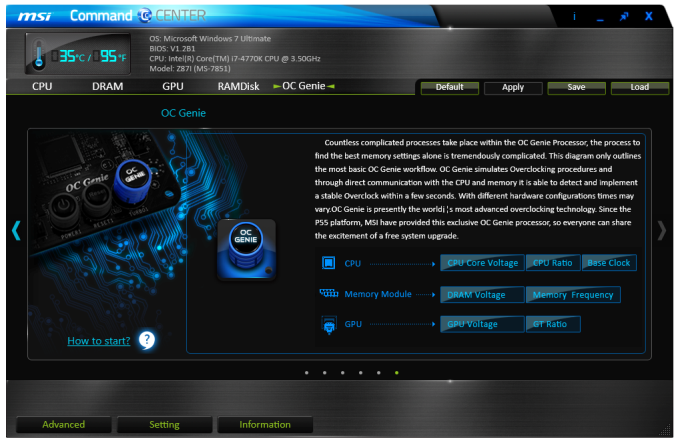 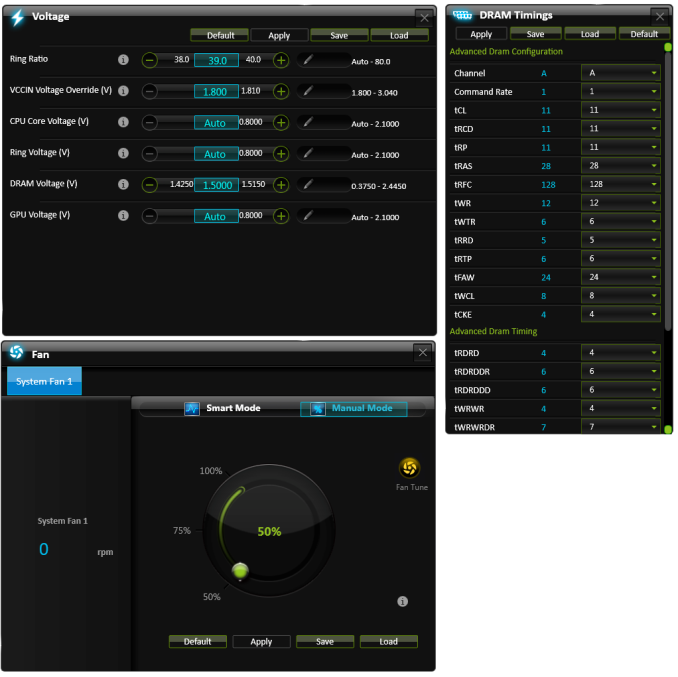 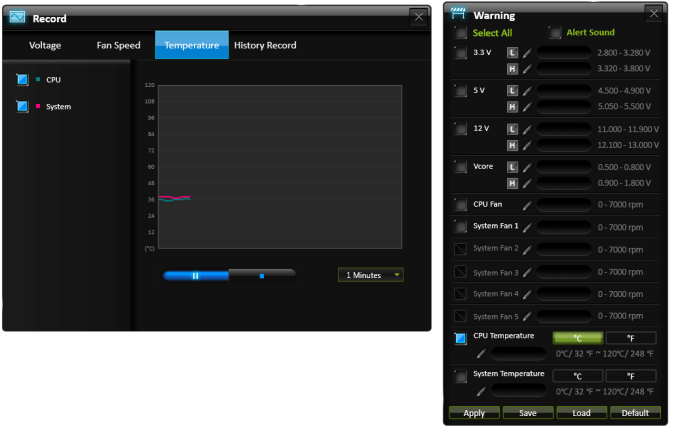 In order to group all the MSI apps together, we have MSI Suite – a drop down menu on the top of the desktop.  It offers icons for all the MSI utilities, as well as options to add custom utilities.  It offers notifications when updates are available.  While I see no use for it personally (I would prefer instantaneous movements rather than animations), it does have potential to clear some desktop clutter. 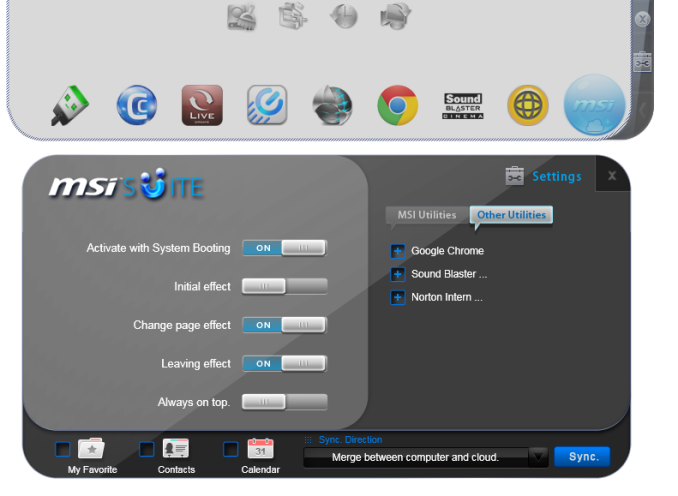