Honestly, the biggest problem with assembling a system in the Rosewill Throne is the fact that the case weighs thirty pounds. Add in hard drives, beefy video cards, aftermarket CPU cooling, and a power supply, and watch that weight jump really fast. If you're not a ninety pound weakling like I am you'll have a somewhat better go of it, but there's no denying that the case is big and heavy.

Building your system with the Rosewill Throne isn't going to yield many surprises due to its bone stock garden variety ATX case design. You'll unfortunately have to install the motherboard standoffs yourself, a task that's actually becoming less and less common with modern enclosures. Likewise, while the 5.25" drive bays are toolless, the steel drive sleds most definitely are not.

3.5" and 2.5" drives alike screw into the bottoms of the drive sleds, which are then inserted into the drive cage from the motherboard side of the enclosure and connect behind the tray as is typical of most case designs these days. While I'm not necessarily heartbroken about this design, I feel like this is one place where other designers are making great strides in innovating. It may complicate things somewhat, but toolless 2.5" drive solutions are the direction things are headed. There's nothing inherently wrong with the design here, but there's also definite room for improvement. 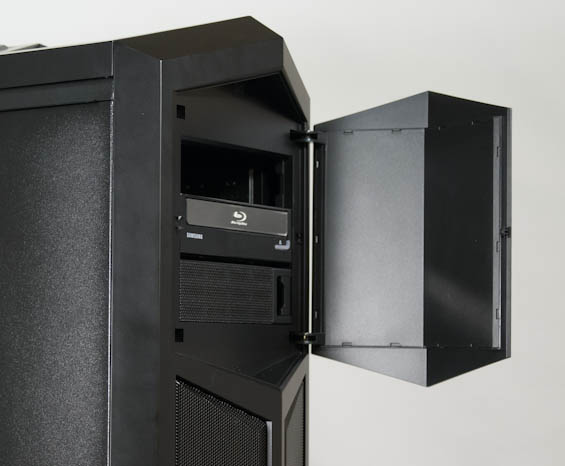 As I mentioned in the introduction, I ran into an alignment issue with the front fascia of my review unit due to its preproduction nature, and that's pictured above. It shouldn't affect test results and my understanding is that it's totally unique to my test unit, but it bears mentioning nonetheless. 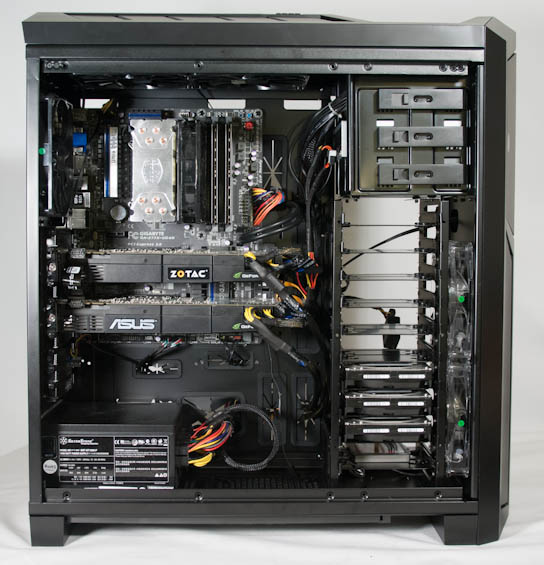 Installing the expansion cards and power supply was relatively painless, but where the Throne runs into trouble is cabling. It doesn't look so bad from the primary side, but reach behind the motherboard tray and experience a rat's nest of wiring that's incredibly difficult to sort out before you've even installed your hardware. 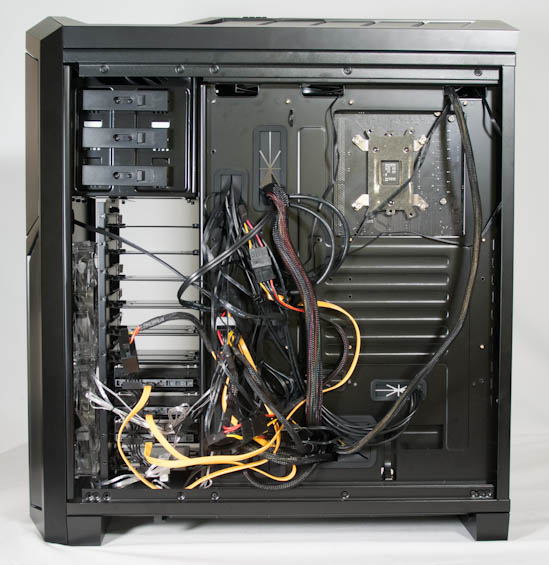 I'm not sure how much it can be helped; due to the massive amount of connectivity and control in the top of the case, you're looking at a tremendous amount of wiring just for the case alone. Before you even get to hooking up indicator LEDs of the power or reset buttons, you have two USB 2.0 headers, one USB 3.0 header, one SATA cable for the hotswap bay, one molex cable for the hotswap bay, the HD audio header, another molex line for the fan controllers, and then eight fan headers in total for the fan controllers. In some ways, the Throne is already a full house, and if you're lousy at cable routing and organization like I am, things will get very ugly very fast.

The reality is that as with most Rosewill cases, you're making some very specific tradeoffs. If the reviews on NewEgg are any indication, most users are pretty comfortable making those tradeoffs, but it's nonetheless important that you be aware of them. The Throne doesn't have quite the level of cable organization as a competing NZXT Phantom or Corsair Obsidian, and the relative lack of fan filters mean dust will be an issue sooner rather than later. What you get in exchange is a big, roomy enclosure with a whole lot of airflow.