As mentioned in the Z87 Extreme6/AC review, one area that ASRock needs to focus on more than any other is Software.  In previous generations ASRock likes to push forward their XFast system – RAM, USB and LAN.  Each of these technologies is always advertised as offering 5x performance, although specific selection of benchmark and testing for each often helps that claim.  Over a number of reviews we always analyze these features, and all three of the XFast range can generate a positive buzz for ASRock.  In terms of the standard software package with the Extreme6/AC, the OC Formula gets a bump with corrected spelling, more accurate voltage reporting, and overclock oriented memory configuration.  One thing missing in the ASRock software stack is an auto updating service, which we will no doubt see over the next year or two.

Installation of the drivers and software from ASRock has been good for the last few generations, often requiring one click to install everything (after a deselection screen).  The sole issue I usually have with these systems is the inclusion of 30-day trial anti-virus software from big companies that most enthusiasts like to uninstall.  This option gets deselected when I test the motherboard, but I always have to scroll down to deselect it.

For the Z87 platform release, ASRock have decided to re-skin their software to bring it more into this decade.  Instead of the ASRock Extreme Tuning Utility (AXTU), normal motherboards get A-Tuning, and OC motherboards get Formula Drive, which opens up with automatic overclocking options: 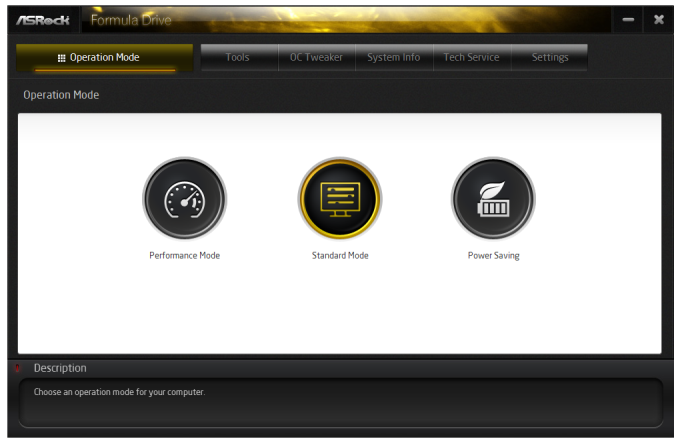 By default we are in Standard Mode which is the default method of operation.  In Performance Mode the system essentially moves into ‘High Performance’ power mode, offering 39x CPU multiplier at both idle and any core loading.  In Power Saving mode the system reduces to 8x when idle, and then under continued load slowly ramps up the CPU speed to the full 39x.  This process takes about 5-8 seconds of constant load to reach the top speed ensuring that short operations do not cause the CPU to draw a lot more power than required.  When Performance Mode is selected, an additional option ‘Auto Tuning’ is given which performs a tuning based automatic overclock – we go over this operation in the Overclocking section.

The Tools menu is next, and l would assume by the amount of whitespace and the size of the buttons to be the area where future ASRock ideas are implemented: 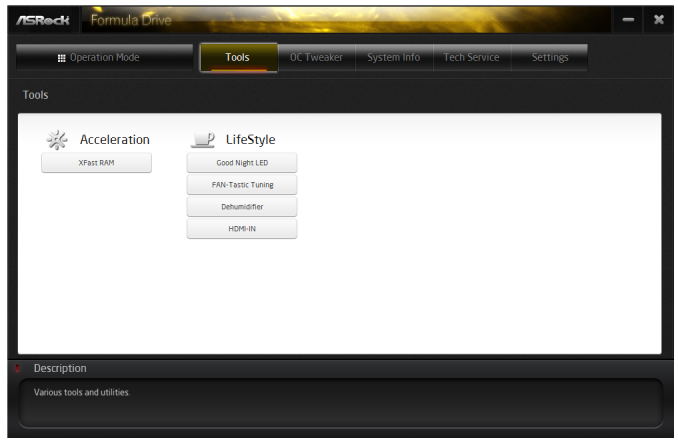 The first up is XFast RAM which gets a new interface but performs much the same operation as last generation – partition an amount of memory off for cache and temporary files. 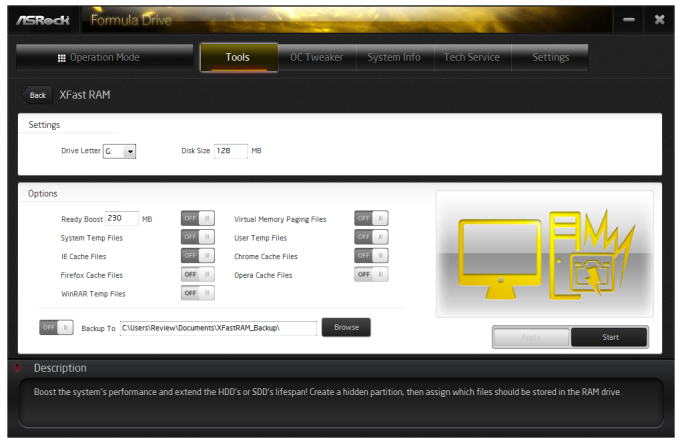 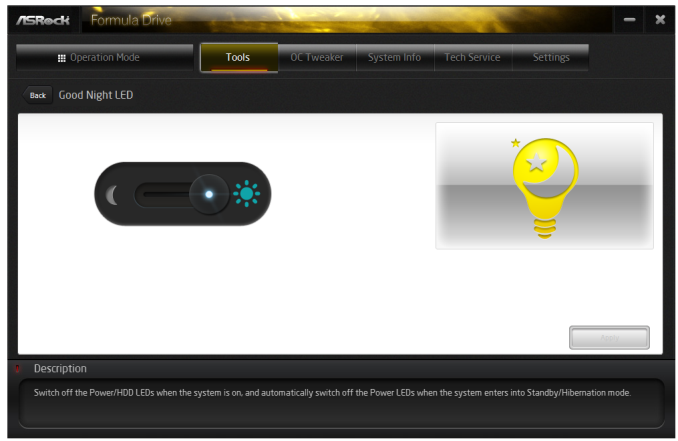 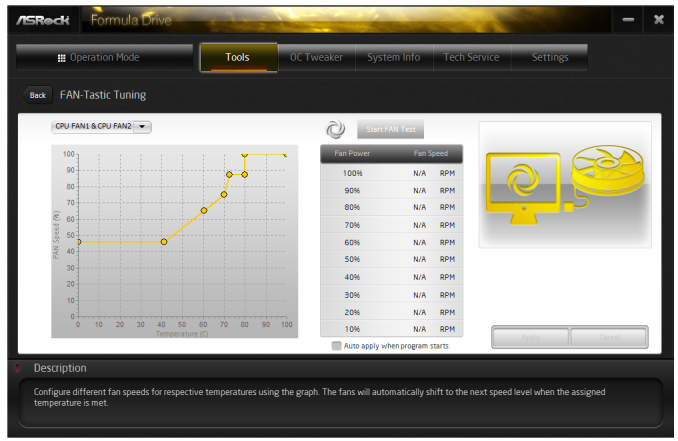 With the fan options, users can get the software to test the fan to find its power-to-RPM profile which ASRock then translates through software into an 8-point gradient graph of Fan Speed vs. temperature.  This is 95% of what fan controls should be!  The only thing missing is a small amount of hysteresis – fan speeds are kept at the high speed as the system cools down in order to help the system to cool down quicker.

The Dehumidifier function is one from last generation, offering users in humid climates to keep the fans attached to the motherboard on for a fixed amount of time after the PC is shut down.  This allows the air inside and outside of the case to equilibrate faster – users in these climates can suffer from condensation if the air in the case cools down and the water saturated air causes the water to form droplets on the inside of the case.  This function helps keep the temperature inside and outside the case constant after shutdown, meaning if there is an issue for condensation it would apply to the whole room, not just the case. 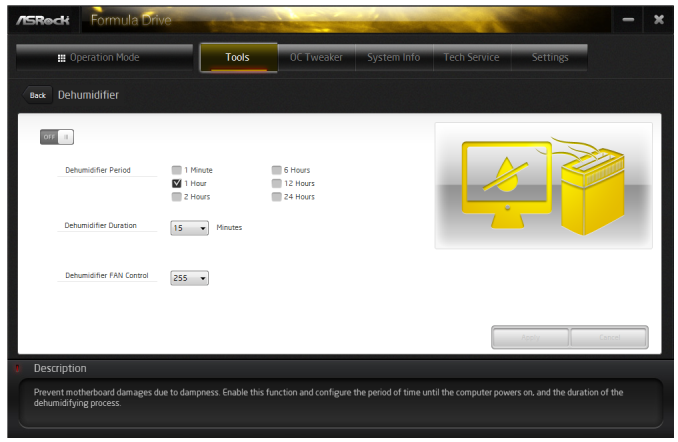 One of the new features on ASRock’s motherboard range is the inclusion of a HDMI Input on the rear IO.  The purpose of this is to have an all-in-one entertainment system on the desk.  Imagine having a PC and a console on the desk – this would require two inputs into the monitor plus extra cables around the rear of the monitor.  With HDMI-In we can plug the console into the PC and then use a hotkey in the OS to switch between the two.  I was unable to test the feature as I do not own a console (I sold them all), but one thing about the HDMI-In software I found was that there is an invisible window present at run time.  This can affect options such as ‘Show Windows Side-by-Side’, as it includes this invisible window.  It is also selectable by alt+tab. 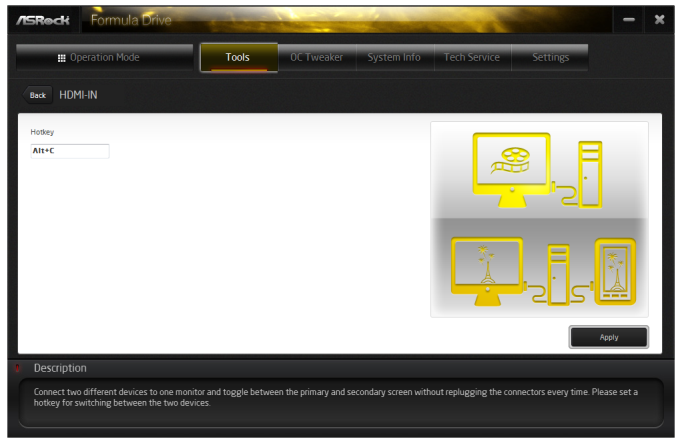 For manual overclocking in the OS, ASRock has skinned its OC Tweaker in the new style.  I like the fact that the options are now easier to see and manage, although ASRock are missing the ball by not including the ‘current’ values alongside the ‘adjusted’ ones.  This would allow users to see what is currently selected against what is currently applied.  A simple menu alongside an advanced menu would be a nice addition, as well as a series of information in the whitespace to the right showing default values.  A lot of motherboard manufacturers are also offering inputs by typing as well as sliders, which is something that ASRock may want to look into for the future. 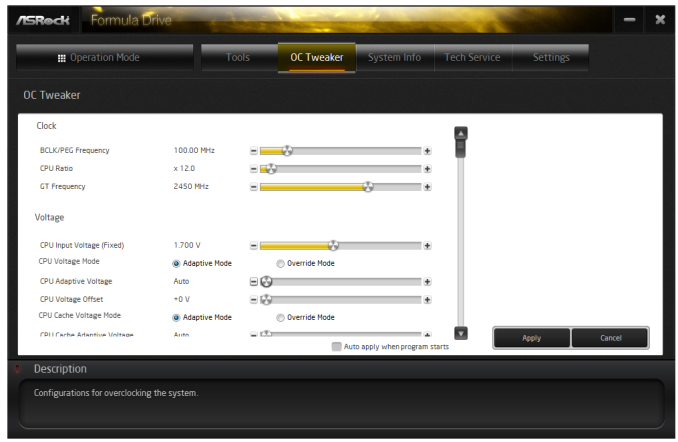 The information for the system is under System Info, which acts more like a Hardware Monitor: 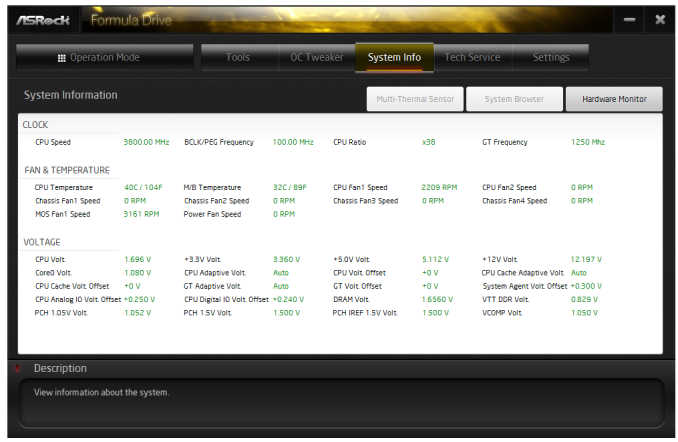 One flaw that has been fixed is the CPU Voltage reported.  Previously on the Z87 Extreme6/AC, it would the CPU VIN voltage (from the FIVR) rather than the voltage actually being applied to the CPU.  This is now fixed.

Despite the reasonable assumption that memory suffers from the effects of hitting the limit of diminishing returns as you improve speed for real-world performance, overclockers love squeezing as much synthetic performance out of memory that is physically possible.  ASUS have had their MemTweakIt tool on the last few generations of ROG boards, and ASRock have their second platform now with Timing Configurator which allows users to adjust memory timings on the fly. 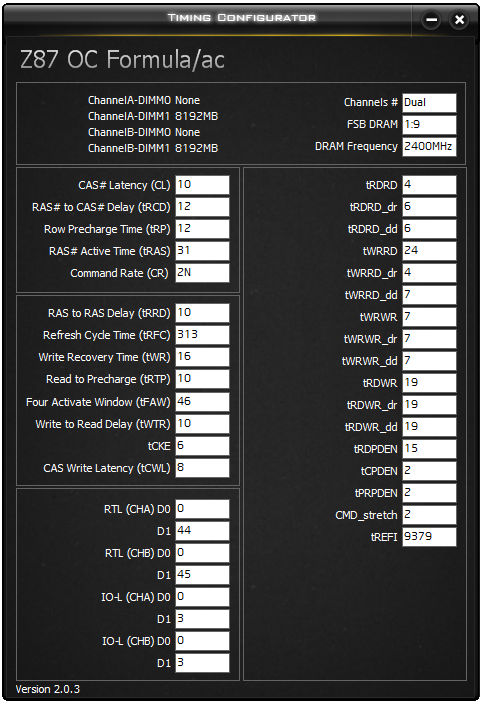 One of the more long-standing positive features in ASRock’s product stack is XFast USB.  The premise is simple – the Windows 7 USB driver is not as optimized as it could be.  With XFast USB ASRock are implementing a BOT driver to both USB 2.0 and USB 3.0 which improves USB peak speed at the expense of latency.  In our USB testing we see this as a large improvement in terms of both peak and real-world speeds. 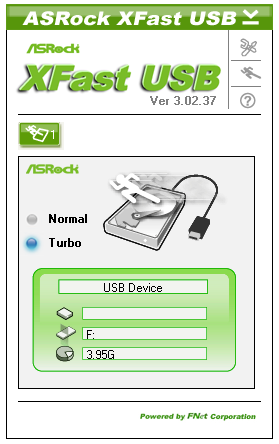 ASRock bundle a licensed and skinned version of cFosSpeed to help with network management.  XFast LAN allows users to give certain programs a higher priority over others, meaning they are rearranged in the Windows network stack appropriately.  XFast LAN also offers extensive analysis of network traffic, although as this is all a software implementation, could arguably increase CPU loading. 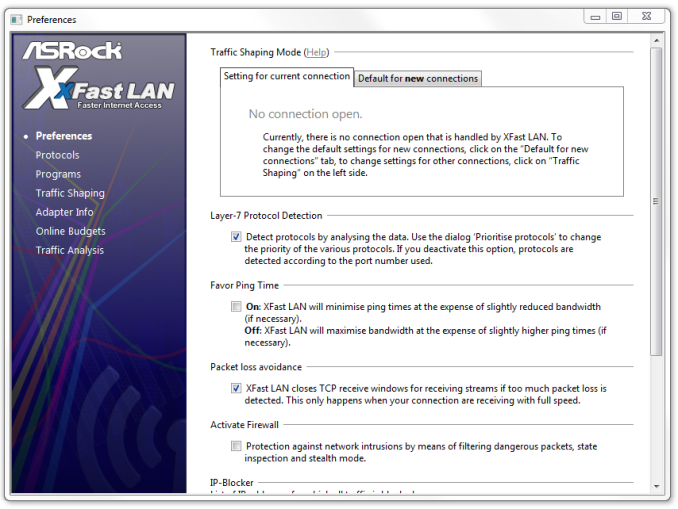 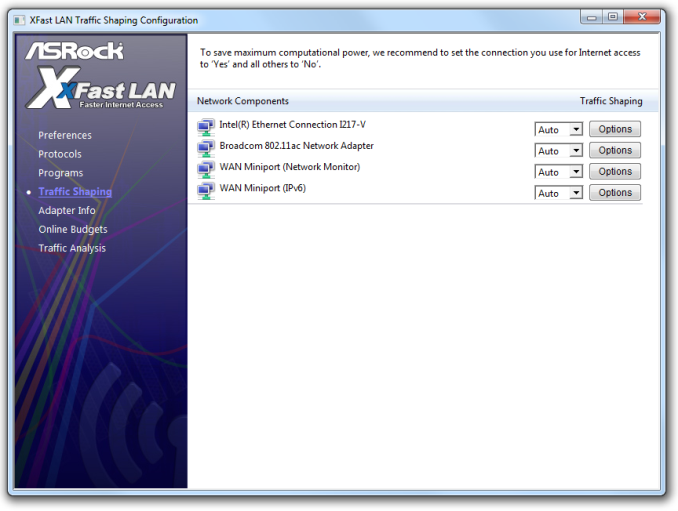