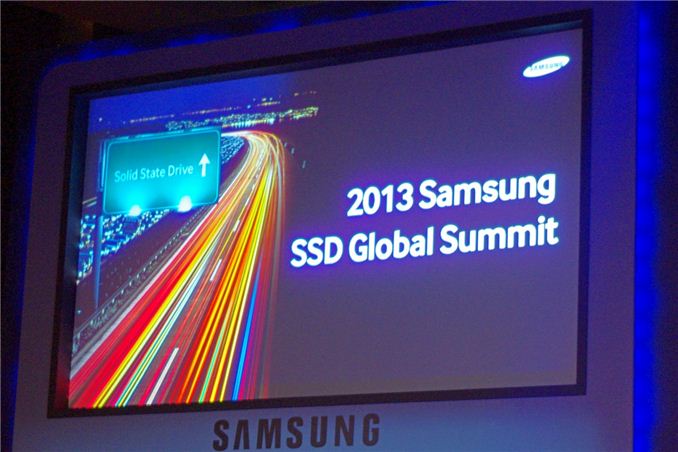 As part of the SSD Summit in Korea today, Samsung gave the world media a brief glimpse into some new technologies.  The initial focus on most of these will be in the Samsung 840 Evo, unveiled earlier today.

The most thought provoking announcement was TurboWrite.  This is the high performance buffer inside the 840 Evo which contributes to the high write speed compared to the 840 (140 MB/s on 120GB drive with the 840, compared to 410 MB/s on the 840 Evo 120GB).  Because writing to 3-bit MLC takes longer than 2-bit MLC or SLC, Samsung are using this high performance buffer in SLC mode.  Then, when the drive is idle, it will pass the data on to the main drive NAND when performance is not an issue.

The amount of ‘high-performance buffer’ with the 840 Evo will depend on the model being used.  Also, while the buffer is still technically 3-bit MLC, due to its use in SLC mode the amount of storage in the buffer decreases by a factor three.  So in the 1TB version of the 840 Evo, which has 36 GB of buffer, in actual fact can accommodate 12 GB of writes in SLC mode before reverting to the main NAND.  In the 1TB model however, TurboWrite has a minimal effect – it is in the 120GB model where Samsung are reporting the 3x increase in write speeds.

In the 120GB and 250GB models, they will have 9 GB of 3-bit MLC buffer, which will equate to 3 GB of writes.  Beyond this level of writes (despite the 10GB/day oft quoted average), one would assume that the device reverts back to the former write speed – in this case perhaps closer to the 140 MB/s number from the 840, but the addition of firmware updates will go above this.  However, without a drive to test it would be pure speculation, but will surely come up in the Q&A session later today, and we will update the more we know.

A new feature on the 840 Evo is the addition of Dynamic Thermal Guard, where operating temperatures of the SSD are outside their suggest range (70C+).  Using some programming onboard, above the predefined temperature, the drive will throttle its power usage to generate less heat until such time as the operating temperature is more normal.  Unfortunately no additional details on this feature were announced, but I think this might result in a redesign for certain gaming laptops that reach 80C+ under high loading. 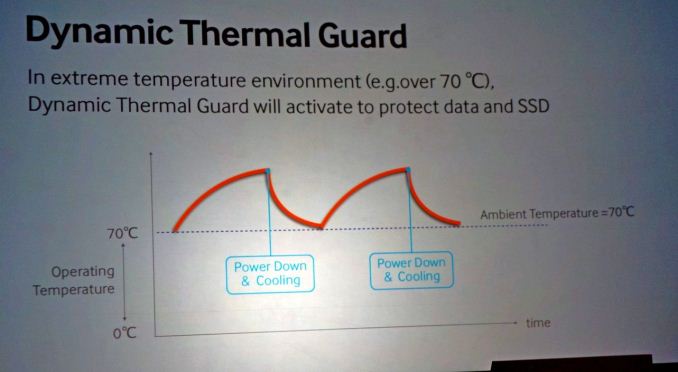 While this is something relatively new, it is not on the 840 Evo, but as part of the summit today it is worth some discussion.  The principle behind NVMe is simple – command structures like IDE and AHCI were developed with mechanical hard-disks in mind.  AHCI is still compatible with SSDs, but the move to more devices based on the PCIe requires an update on the command structure in order to be used with higher efficiency and lower overhead.  There are currently 11 companies in the working group developing the NVMe specifications, currently at revision 1.1, including Samsung and Intel.  The benefits of NVMe include: 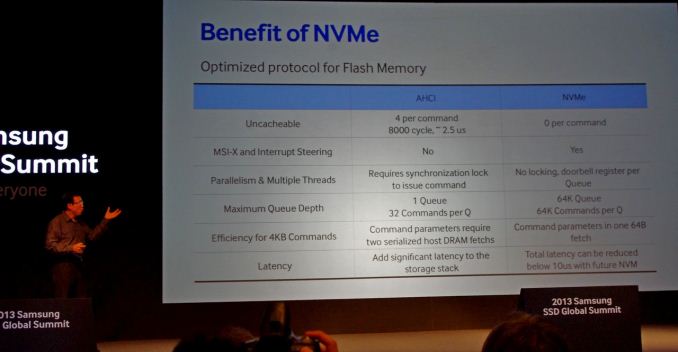 One big thing that almost everyone in the audience must have spotted is the maximum queue depth.  In AHCI, the protocol allows for one queue with a max QD of 32.  In NVMe, due to the way NAND works (as well as the increased throughput potential), we can apply 64K queues, each with a max QD of 64K.  In terms of real-world usage (or even server usage), I am not sure how far the expanding QD would go, but it would certainly change a few benchmarks.

The purpose of NVMe is also to change latency.  In AHCI, dealing with mechanical hard drives, if latency is 10% of access times, not much is noticed – but if you reduce access times by two orders of magnitude and the level of latency stays the same, it becomes the main component of any delay.  NVMe helps to alleviate that.

Two of the questions from the crowd today were pertinent to how NVMe will be applied in the real world – how will NVMe come about, and despite the fact that current chipsets to not have PCIe-based 2.5” SSD connectors, will we get an adapter from a PCIe slot to the drive?  On the first front, Samsung acknowledged that they are working with the major OS manufacturers to support NVMe in their software stack.  In terms of motherboard support, in my opinion, as IDE/AHCI is a BIOS option it will require BIOS updates to work in NVMe mode, with AHCI as fallback.

On the second question about a PCIe -> SSD connector, it makes sense that one will be released in due course until chipset manufacturers implement the connectors for SSDs using the PCIe interface.  It should not be much of a leap, given that SATA to USB 3.0 connectors are already shipped in some SSD packages.

More information from Korea as it develops…!