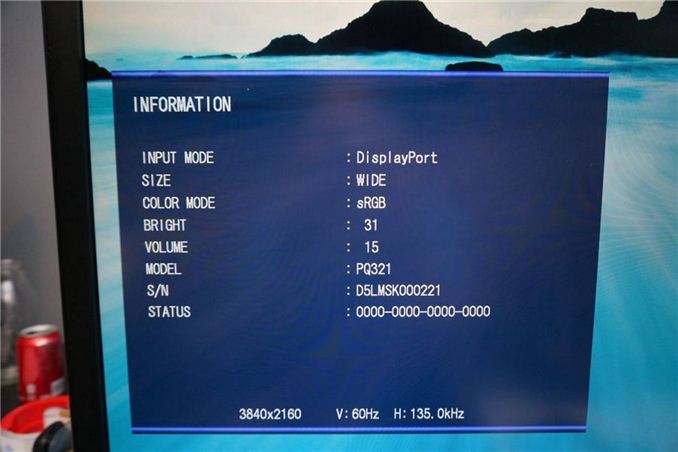 Beyond monitor reviews for AnandTech, I do reviews of TVs and Projectors for a number of sites. Ever since Sony launched their VPL-HW1000 4K projector at CEDIA in 2011, the idea of 4K, or Ultra High Definition (UHD), in the home has been picking up speed. Unfortunately I think for the home theater world this has as much to do with 3D not making vendors much of a profit, and OLED being continually delayed, and needing to have some technology to fill in a gap that provides a source of revenue. Flat panels keep falling in price and vendors keep needing to find a way to get consumers to upgrade to something better to make money. 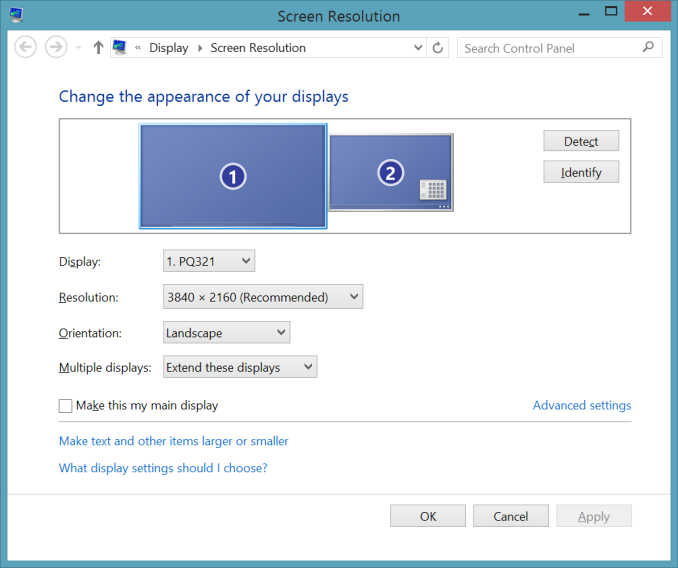 When it comes to computers, smartphones, and tablets, these benefits totally change. There is native high-resolution content available, and we sit much closer to our 32" desktop monitors relative to how close we are to a 50" flat screen TV. As a result we were all excited to see the ASUS PQ321Q be announced in June and have been waiting for a review sample to arrive. It did this week and while the full review will be coming as soon as possible, this is a quick look at the performance out of the box, and how it works. 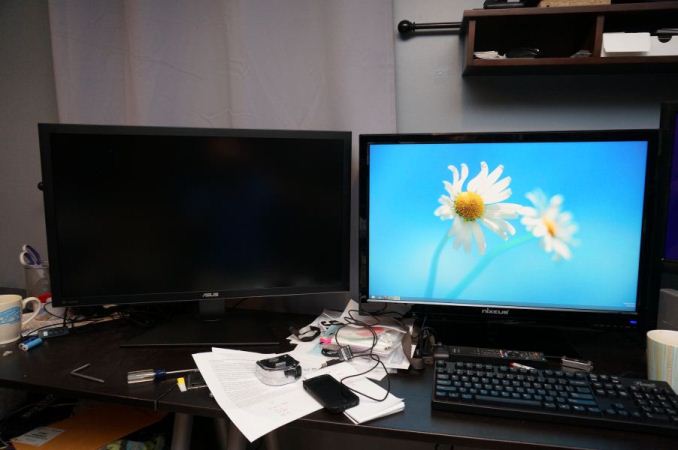 Sitting next to a 30", 2560x1600 display, the ASUS (on the left) looks around the same size. It has a nice, thin design that looks good on the desk, but necessitates a large power brick to accomplish. It feels very solid, as you expect from a display that costs $3,500, and has a slight anti-glare finish applied to it. The amount seems to be quite low, as I don't see any fogginess or sparkles or other issues on the screen. I'm not sure if it is a design decision, or something that will be changed down the road, but currently the labels to control the OSD are on the back of the display and not the front. ASUS includes a sticker if you want to have them on the front (which I attached), but if you are only going to use them to initially calibrate the monitor then you'll have a nice, clean front without it on.

For my testing I also installed the preview copy of Windows 8.1 to use DPI scaling. At 100% text on the ASUS is very small and hard to read. Setting it to 150% and now on applications that support it, it looks very sharp. Images and screenshots look amazing, but typing this in Chrome right now it looks fuzzy. This is going to be an issue with Windows and HighDPI displays until every vendor manages to update their software to support resolution scaling better. Viewing webpages in Firefox they are crisp and sharp compared to Chrome, so software vendors really need to catch up. 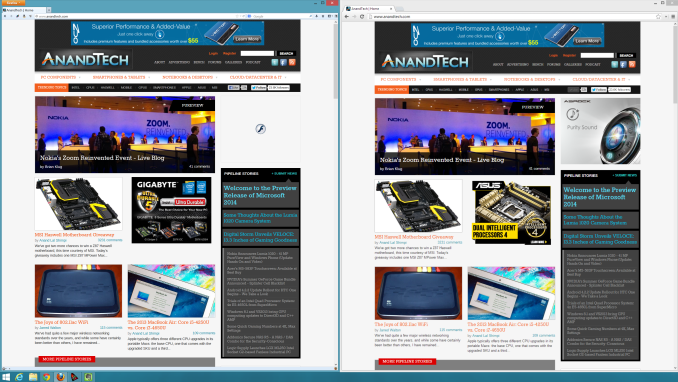 Using an NVIDIA GTX 660 Ti card, with the most recent drivers, you can enable MST mode on the ASUS to provide a full 3840x2160 signal at 60p over a single DisplayPort cable. I know with some earlier UHD monitors I had heard this could be an issue and you would be limited to 30p, but on the ASUS it worked great as soon as I changed the menu setting.

For some initial testing, I used CalMAN 5.1.2 and the sRGB mode on the ASUS PQ321Q. All measurements were done as they are with other monitor reviews, using a profiled C6 meter and targeting 200 nits of light output and a gamma of 2.2. 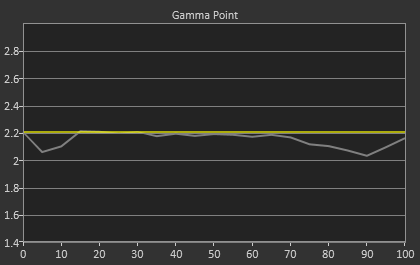 Looking at these charts for the grayscale, we see that the overall error starts low but rises up to a dE2000 over 3.0 by the end. There is a lack of blue at the top end, and that leads us to a warmer that reference CCT of 6279 on average. The gamma tracks pretty well, with an overall average of 2.14, and the average grayscale dE2000 is only 1.99 in the end. The largest issue with this test was getting the brightness level correct. There are only 31 steps of brightness control, so I wound up with a white level of 204 nits instead of the target 200 nits. Very close, but that is a pretty coarse adjustment.

We have a huge range in brightness, from 57 nits up to 408 nits, and a small level of control over it. If you are trying to target a number like 200 exactly, you will be slightly off, but you can get pretty close. It's just surprising to see such small control for such a huge range.

With colors, the ASUS PQ321Q isn't quite as good as with the grayscale. The main issue looks to be a lack of red and blue saturation, which causes a lack of magenta saturation as well. Looking at the CIE chart you see those points fall short of their targets. You'll also see that green goes a bit too far, giving us some color errors that are over 3.0 except for Cyan. 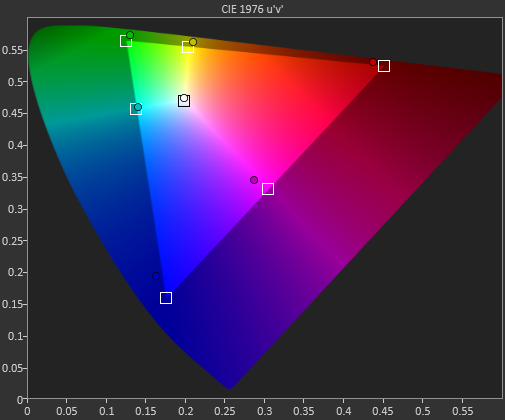 On the more strenuous Gretag Macbeth testing, SpectraCal has added a 96-point test that goes above and beyond the 24-point test we have always run. The average dE2000 I found with the two version were 2.61 and 2.65, so they produce very comparable results. I will use the 96-point version going forward as it provides a larger number of data points, and if one sample is bad and 95 are good, will produce an average value that better indicates that. For smartphones and tablets we will continue to use 24-point versions, as those tests are not automated like the PC versions are. 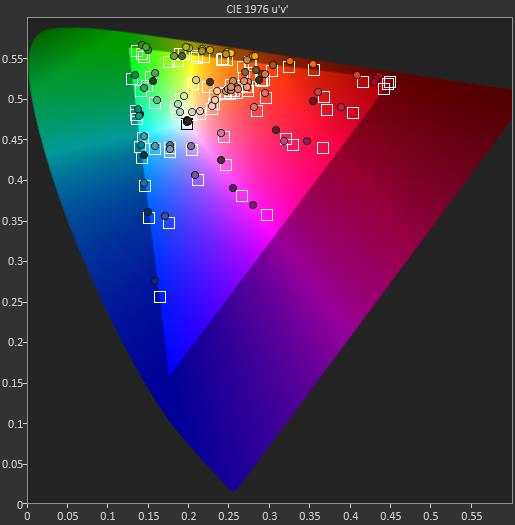 As we saw with the standard color CIE chart, reds and oranges are the worst offenders, as they are a bit out of the gamut but lacking in saturation on the red end. Cyans, Magentas and greens are better, but the overall color reproduction isn't perfect straight out of the box.

Our final initial test is the saturation test. As you might expect with a gamut where under-saturation is an issue, the errors get larger as saturation approaches 100%. 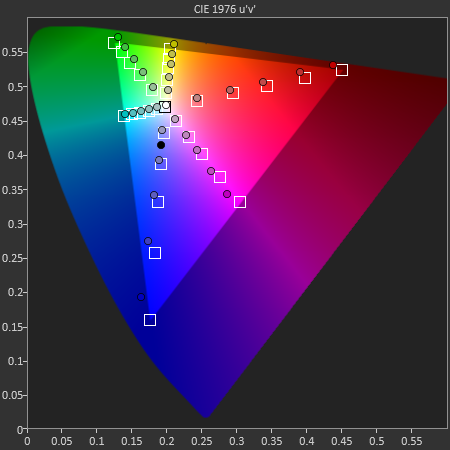 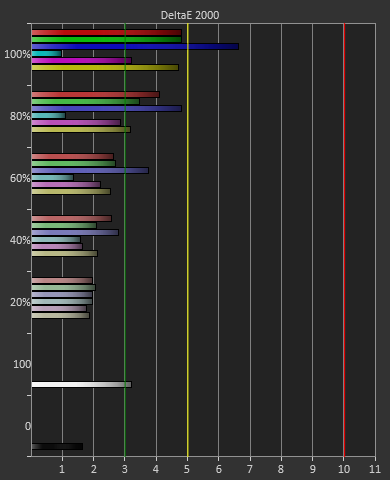 This is a fast look at the ASUS PQ321Q. The full AnandTech review will follow shortly as I push it through its paces to see what it can do. Any additional features that people want to see tested you can let me know in the comments and I will try my best to accomplish them.