Rosewill Blackhawk Ultra Case Review: Were It Not For Competition

In and Around the Rosewill Blackhawk Ultra

Interestingly, Rosewill's aesthetic for the Blackhawk Ultra is very staid and conservative, which is welcome. There's a glossy plastic trim which looks a little chintzy, but the predominate motif is "ventilation." The entire front and top of the enclosure is essentially just a black mesh grill, and that includes the shields for the 5.25" bays.

Given the sheer size of the Blackhawk Ultra, I'm surprised Rosewill only included four 5.25" bays. This isn't necessarily a bad thing; I've maintained that 5.25" bays are essentially an albatross hanging around the neck of modern enclosures, and one of the only things they're truly needed for that can't be handled by an external enclosure and a USB cable is for storing coolant reservoirs. Certainly you could install a healthy liquid cooling system in the Blackhawk Ultra, but I suspect that's not what the case was truly intended for. If you pop off the front fascia, though, you can see they did something interesting with the 5.25" bays: outside of the standard bay shields, the metal pop-out plates inside feature mounting points for another 120mm fan and can be reinstalled after they've been removed.

The top of the case is roughly as minimal as any other part of it; the I/O cluster features a healthy four USB 2.0 ports and two USB 3.0 ports, and there's an inclined SATA hotswap bay. On the back are a substantial number of radiator hose routing holes, but the most notable feature is probably the secondary power supply bay in the top of the enclosure. There's a shield already in place, but it can be removed, though as I mentioned you'll have to remove one of the top 230mm fans to use it.

Rosewill secures the side panels with thumbscrews per usual, but frustratingly, the side panels are notched. This is baffling given that the Thor v2 uses hinged panels, and hinged panels (or another solution) should really be standard when you're paying this much for a case. The Blackhawk Ultra is enormous, and having to spread yourself out to place pressure on all four corners of a side panel to secure it is difficult to say the least. They couldn't help adding more fan mounts to the side panels, though; if you're so inclined you can actually mount nine 120mm fans to the left panel and even another 140mm one behind the motherboard (located directly behind the CPU.) 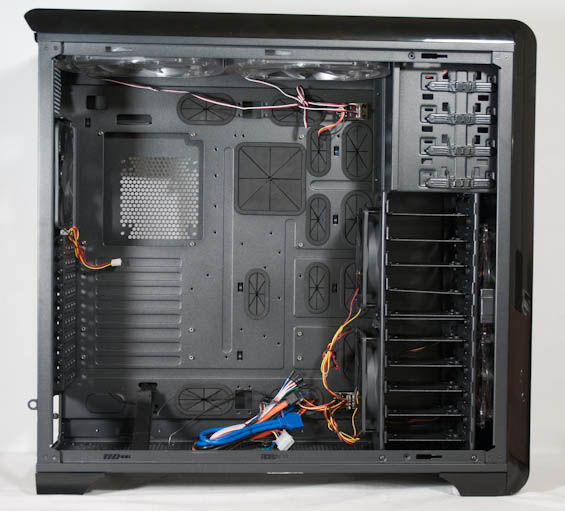 When we do look inside the case, there aren't actually that many surprises: this is a giant ATX case. Rosewill has toolless clamps for the 5.25" bays and ten metal drive trays that use rubber grommets to dampen vibration from 3.5" drives. There are routing holes for all motherboard sizes from ATX on up, but when you're looking at the size of the holes and how they're arranged, something should be sticking out: the ones near the power supply bays. Power cables are the thickest ones in the system, yet these holes are actually fairly small. You'll see later that this materializes into exactly the kind of problem you'd expect.

There's also one major omission in the Blackhawk Ultra's design that was forgiveable in the essentially value-priced Thor v2 but less so here: fan filters. There's only a single removable filter on the bottom of the case for the PSU; all of the other vents in the case are filter-free. I've seen what can happen to a Thor v2 when the grills aren't dusted out regularly, and I can't imagine the Blackhawk Ultra will fare much better on that front.

All in all there aren't too many surprises with the Blackhawk Ultra's design; that wouldn't be an issue ordinarily, but remember that this is a $179 case. In that light, it can seem strangely conservative and even a bit archaic in some ways.