Appropriate to its only slightly dated internal design, the Fractal Design Define XL R2 is also a little more difficult to assemble than other modern cases. While the biggest problem is its weight (a complaint that can't really be fairly levied when other, heavier cases get recommendations), I did find a couple of hangups while putting the XL R2 together.

I'm at the point with case reviews where if the enclosure doesn't make some kind of allowance towards making installing the motherboard easier, I'm liable to dock the manufacturer points. That assumes any kind of utterly worthless, arbitrary point system, but you get the idea. Either pre-extruded standoffs, pre-installed standoffs, or at least an aligning stud in the center of the motherboard tray...any of these would've been appreciated. The XL R2 includes none of these conveniences, so you're stuck screwing in standoffs one at a time. 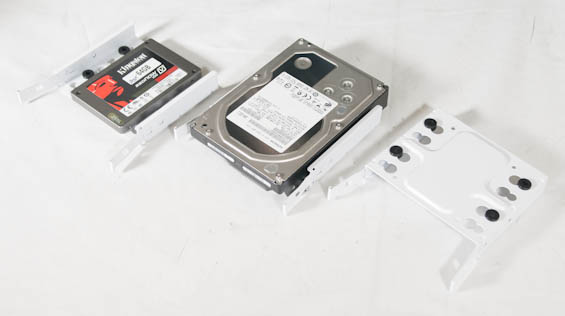 Installing drives into the drive trays continues to be easy, and the middle cage is easily removed by undoing two thumbscrews. 3.5" drives are bottom mounted to the trays on rubber grommets using special screws, while 2.5" drives use standard screws and fit neatly between the rubber mounts. Unfortunately, installing a full size hard drive into the top slot of the cage will result in it scraping against the bottoms of the plastic pegs that allow for the rotatable cage mounts. I actually snapped one out trying to install a 3.5" hard drive in, so you've been warned. The pegs are easy to replace, though. 5.25" drives are installed using special thumbscrews included with the case; it's not "toolless" but it's close enough, and certainly very secure. 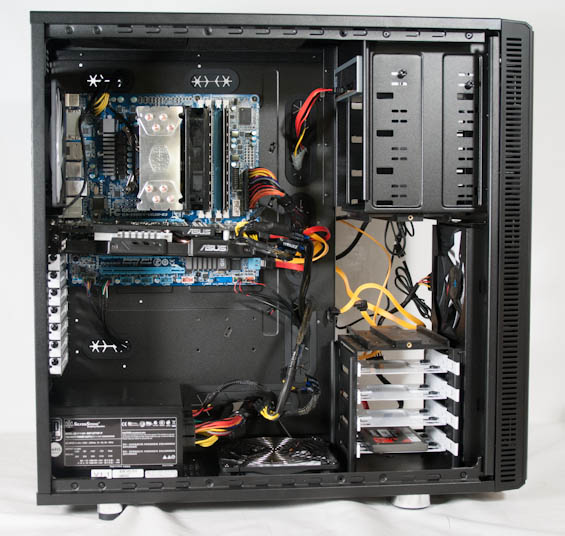 Thankfully, wiring up the XL R2 is easy enough, and it's not hard to produce a cleanly wired interior. There's a healthy amount of space behind the motherboard tray, and the hinged side panels make it easy to close up. Fractal Design also smartly avoids accidentally blocking the AUX 12V routing hole with guides/supports for the side panel; this is a mistake I've seen a lot of designers make.

The Fractal Design Define XL R2 isn't ultimately that difficult to assemble, but it's more trouble than it really needs to be. Really they're just missing two major conveniences: a lip to support the power supply (and make it easier to install), and either pre-installed motherboard standoffs or an aligning post. There's a solid design here that just needs to incorporate some of the advances in design technology some of Fractal Design's peers have produced. Just like the blocked off fan mounts have become increasingly common due largely to Fractal Design's cases, they should consider employing additions like NZXT's card reader and asymmetrical drive cages, or Corsair's extruded cable channel.