In and Around the Nanoxia Deep Silence 2 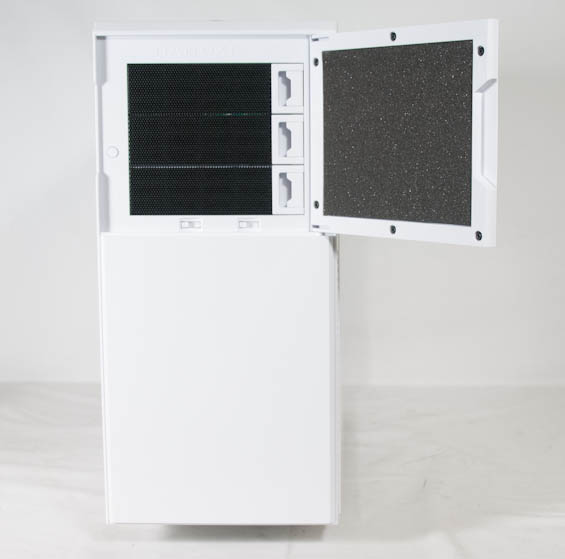 Losing the fan door in the front of the DS2 means losing the filters for the intake fans, which is an unfortunate loss. The front filters on my DS1 tend to get gunked up in a hurry (the joys of being a cat owner), so take note. That said, the door to the optical drive bays is basically the same in terms of build quality and acoustic padding, and it also hides the sliders for the fan controller as well as the reset button.

The top of the DS2 is where the differences are most noticeable, as the chimney is gone in favor of just a pair of fan mounts and a cluster of I/O surrounding the green LED-ringed power button. Once again I'm perplexed as to why an odd number of USB ports are included, though: you get two USB 3.0 ports, but why only one USB 2.0? It's a fairly minor grievance but enough of one; with how smart and quality-oriented the rest of the DS2's design is, why would they cheap out here?

Unfortunately my largest complaint with the DS1 remains unaddressed with the DS2. The side panels are held in place by thumbscrews, but they again use the notches and rails instead of a hinged design to secure themselves. The hooks on the side panels are very easy to bend inward if you try to force them back on. This is in fact the single biggest usability issue the DS2 has, but it's a frustrating one, requiring you to turn the case on its side and use your body to apply enough pressure to evenly replace the panel. 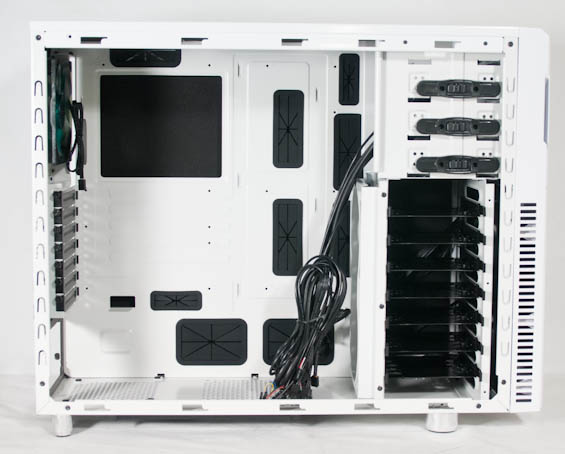 The interior of the DS2 is fairly by the book, but the biggest loss is the set of removable drive cages. In its place we have a pair of internal 120mm fan mounts that Nanoxia even recommends using for a 240mm radiator, and Nanoxia continues to include a smart set of cable routing holes in the motherboard tray as well as toolless clamps on both sides of the 5.25" drive cage. In fact, in the DS2 Nanoxia actually does one better than the DS1, as there's a proper rubber-lined routing hole above the motherboard tray for the AUX 12V line.

I remain fairly optimistic about the design of the DS2, but I do feel like the pair of internal fan mounts are of questionable value compared to being able to outright remove drive cages that aren't needed. Removing those cages is a good way to improve air flow in systems that don't need that much storage. I'm still pretty bitter about the notched side panels as well, but despite these minor grievances, I'm left with a very strong feeling of quality from the DS2. This is a heavy, robust case.