As NewEgg's house brand, Rosewill has been growing in very interesting ways. Being the house brand of a major electronics retailer means dipping your toe into a lot of different markets, and Rosewill has expanded dramatically, to the point where their products are starting to crop up on other vendors' sites. At the same time, those products are gaining attention in their own right. Rosewill's own Thor v2 may not be the best built enclosure, but it's a dynamite performer and can oftentimes be found at a bargain.

Rosewill has also been fairly aggressive about pursuing enthusiasts. It's not enough to simply have a product and offer it; you don't see Best Buy sending out Dynex or Insignia televisions to websites for review. There's also sweet money to be had in chasing mid-to-high end buyers, and that's where the Armor EVO comes in. The EVO is a fairly modestly sized tower capable of supporting E-ATX motherboards and promises healthy cooling performance. It also comes with an unusually optimistic MSRP: $119. Is it worth the money, or did Rosewill misfire? 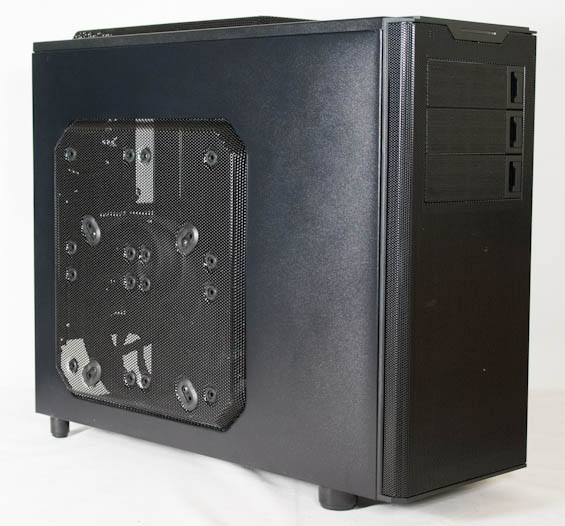 The company has made a habit of producing no frills products at competitive prices; their mechanical keyboards are absolutely killer deals for users who want a basic, comfortable keyboard but don't want to fork out the bread for a high end gaming keyboard. Their cases have been more hit and miss, though: the Thor v2 is fantastic, but the Ranger we reviewed left a lot to be desired. They're fairly young as a case manufacturer to be sure, and unfortunately with the Armor EVO, they may yet have a ways to go.

What's important to note about the Armor EVO is what's specifically missing from the spec table: a fan controller. You can turn the LEDs on and off, but you can't actually control the multitude of included fans. This is not the EVO's biggest problem, but it is definitely a problem because as you'll see later, the EVO has a tremendous amount of thermal headroom.

One of the other things the EVO has to worry about is another case in Rosewill's own stable: the Thor v2. I don't have comparison results for it as the Thor v2 was reviewed on our old testbed, but on the spec table, the only thing the EVO can consistently beat the Thor v2 with is size.