We saw Razer's Project Fiona gaming tablet last year at CES, and came away from the hands-on opportunity and corresponding conversation with Razer CEO Min-Liang Tan fairly impressed with the device. It was chunky and hot, but it ran a Core i7 CPU and an unspecified Nvidia GPU. The concept still needed a fair amount of refinement, but it was clear that Razer had a fairly good idea there. 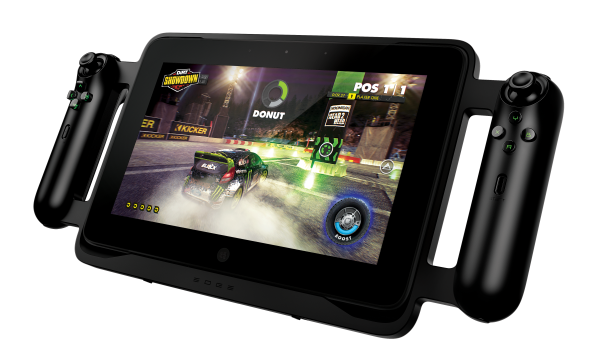 This year at CES, Razer's big reveal is the Edge, essentially the production version of Project Fiona. It's a Windows 8 tablet running Core i5/i7 ULV CPUs, an Nvidia GT 640M LE dGPU, and a 10.1" 1366x768 IPS display. Like many of the new Windows 8 tablets, a lot of the story is hidden in the accessories and attachments - the Gamepad Controller being the most recognizable. Basically, the gaming controller/handles from Project Fiona are now part of a case that the tablet unit attaches into, with an optional extended battery that doubles battery life. Other accessories include a keyboard dock that uses a traditional keyboard and external mouse experience for MMO gamers and other heavily keyboard reliant games, as well as a docking station for connecting to big screens and external gamepads.

From a hardware standpoint, the Edge is pretty interesting. The tablet unit comes in two different SKUs, regular and Pro. The regular comes with a Core i5-3317U CPU, GT640M LE, 4GB DDR3, and a 64GB SSD for $999, while the Pro upgrades you to an i7-3517U, 8GB DDR3, and comes in 128GB and 256GB variants. Razer has not yet announced pricing for the Pro, but will be offering it in a bundle with the Gamepad Controller for presumably cheaper than the accessory on its own. 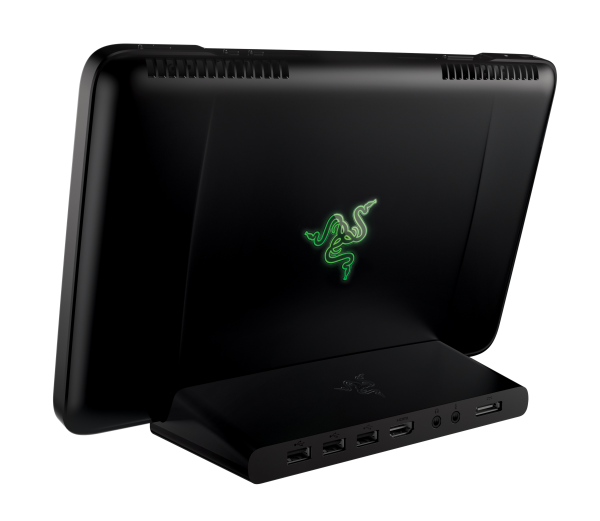 The design of the Edge is pretty familar to anyone who has used the Blade. The back has the same radiused edges and contoured ridges on either side of a light-up Razer logo. Think of the Blade's lid scaled down to 10" and you've got a pretty good idea. Bet on a similar anodized aluminum unibody construction to the Blade. The front face is clean, with a single unbroken glass surface with a circular Windows button underneath the display and a webcam above. Ports and accessories on board include a single USB 3.0 port and Bluetooth 4.0. The dock/power connector is a rectangular slot-in kind, similar to the connector you see on the ASUS Transformer and VivoTab tablets.

While we've seen many of the Ivy Bridge-based tablets go for 1080p panels, I'm okay with the 768p resolution. GT640M LE will push 1366x768 displays pretty reasonably from a performance standpoint, while it'd probably choke and die at 1080p. Sure, you could play at lower-than-native resolution, but who wants to do that?

The Edge is a fairly thick tablet, at 0.8" thick it's about twice as thick as the fourth generation iPad and a solid amount thicker than the 0.53" Surface Pro. Weight, at 2lbs, is essentially the same as the Surface Pro though, which is not too bad. The footprint should be smaller due to the smaller display, though the bezel looks fairly large based on the press images.

Now, the major reason the Edge needed to be so thick is simple: heat dissipation. To that end, there's also two pretty large vents at the top rear edge of the tablet. Large relative to the size of the body, at least. The chances of this tablet getting very hot are pretty high, particularly in gaming situations. Thankfully, if you're using the Gamepad Controller, you won't be holding the back of the tablet anyways, so it hopefully won't be as much of an issue. Obviously, throttling is a major issue to keep track of here, as is battery life when gaming. Razer says they've got some heat dissipation tricks up their sleeve here, a claim I'm more than happy to test out when I get my hands on one. Their thermal engineers have come up with some interesting solutions in the past, so I'm willing to believe them.

Let's go back to the accessories for a moment: the Gamepad Controller seems to be very similar to what we played with last year in Project Fiona. Two handle-style controllers on both sides of the tablet, with dual analogs, a d-pad, and triggers, along with vibration-feedback. It looks like it should be as comfortable to hold as it was before but unfortunately, it's not the most convenient of setups for tossing into a backpack. We weren't given dimensions on the controller, but because it's a two hand-setup, the weight shouldn't be an issue. A 40Wh extended battery is optional to connect to the controller and offers to double battery life. 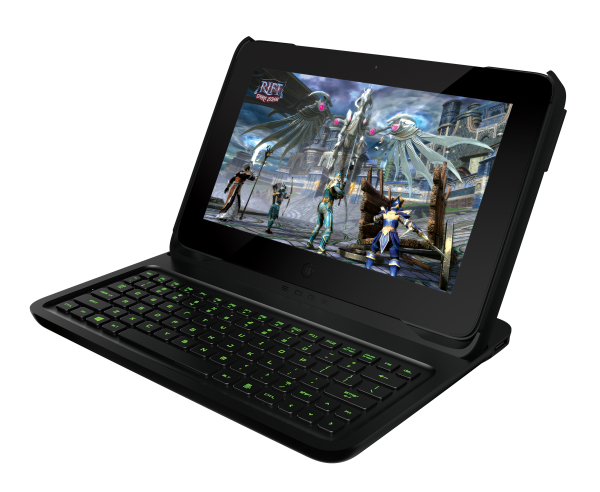 The keyboard dock looks nice, though I'm not sure how comfortable it will be to type on. When you remember that the tablet has a 10.1" display, those keys start looking mighty small. There's no touchpad on it, so input either has to be via the touchscreen or an external mouse. The keyboard is kept very close to the screen, which should aide in making that a workable method of navigation. The keyboard dock is also compatible with the extended 40Wh battery.

The docking station has three USB 2.0 ports, an HDMI 1.4 port, separated 3.5mm line in and line out jacks, and the power connector. The lack of USB 3.0 ports here is disappointing. Razer is pushing it as an accessory to put in your living room so that you can use the Edge almost like a console, but I don't see the GT640M LE offering great performance at the 1080p resolution of most HDTVs. I see a lot more potential in the docking station turning the Edge into a really competent desktop replacement tablet - as the most powerful slate on the market, if any tablet could do it successfully, this would be it. 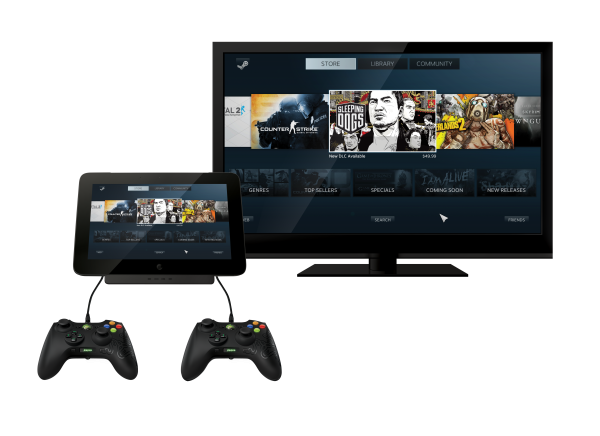 The real question I have with the accessories? How much they'll cost. We know that the base model Edge starts at $999, and I have the sneaking suspicion that the Edge Pro will end up costing around $300-400 more. The Gamepad bundle will probably add at least a hundred to that. In a just world, the docking station would be around $50 while the keyboard dock would be $100, but I'm expecting to be wrong. Razer's accessory pricing scares me, because it could quickly turn what looks like a good deal at $999 into something that goes up to $1500 or more once you add the three accessories and really unlock all the potential of the platform.

I think it's crazy how expensive some of the first-party tablet accessories we've seen are - Microsoft's Touch and Type Covers going for $129/139 really illustrates it; when we start making Apple's $39 Smart Cover look like a reasonable add on cost, something has gone very wrong. So naturally, if Microsoft would charge $129 for what amounts to a cover with a keyboard, imagine how much Razer, a company known for $100 mice and $150 keyboards, will charge.

I think the tablet itself is priced reasonably though - Min started off his presentation with a $1200-1500 ballpark (unrealistic) and gave me a $999 figure by the end of it. Considering that Surface Pro is going for $899, I think the Edge isn't too far off. Sure, the display is a pretty major downgrade - going from a 10.6" 1080p PLS to a 10.1" 768p IPS panel is never good thing, but the GPU goes a long way towards making up for that. It's legitimately the most powerful 10-11" tablet on the market at present, and the only one that's really focused on offering a good PC gaming experience. HD 4000 in its full form isn't bad, but the ULV variant is crippled and the 7W parts promise to be even further cut down, so the GT640M LE in the Edge should really blow them away from a performance standpoint, even if Razer clocked it down to hit their power enevelope target. I'm excited for the potential it offers as a convergence device, since it could really be a system you carry around easily during the day and still use as a main system at a desk if you wanted it to be. It's a platform that has a lot of flexibility on paper. I'll get a chance to play with the Edge during my meeting with Razer on Wednesday morning, so I will update with hands-on impressions then.

EDIT: Updated with correct specs for CPU and display.