Arctic Cooling Accelero Hybrid VGA Cooler Review: Not For the Faint of Heart

Of course, in order to actually test the Arctic Cooling Accelero Hybrid, we must first install it. I had on hand a bone stock, reference NVIDIA GeForce GTX 680, a card which is in my opinion the perfect candidate. The GTX 680's stock cooler isn't bad, but it can get a little noisy if you start overclocking the card at all, and it's not as robust as the cooler on the venerable GTX 580. To be fair, that card had a much higher TDP than the GTX 680 does. 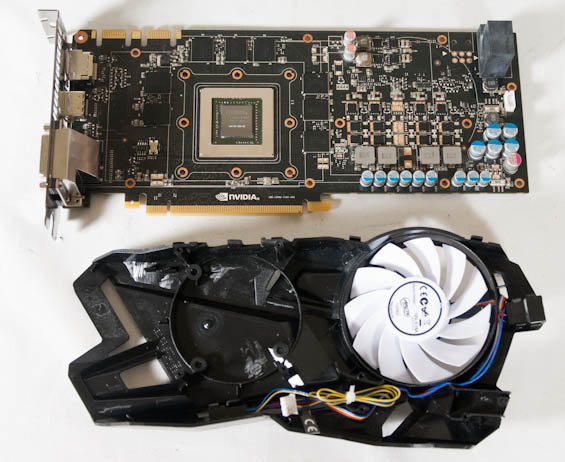 With the original cooling system removed, you'll need to clean the thermal paste off of the GPU die, and Arctic Cooling recommends using an eraser to gently remove any residue that may be on the RAM and VRM dies. After doing so you'll want to safely set aside the video card, as we now need to work on one of the two major parts of the Accelero Hybrid: the shroud. The plastic shroud has kind of a goofy shape and doesn't feel particularly sturdy, and I kind of wish Arctic Cooling had gone with a bit more staid and practical of a design. In the above photo, in the ring to the left of the 80mm fan are three circular rubber pads which have to be applied. These dampen vibration from the waterblock. 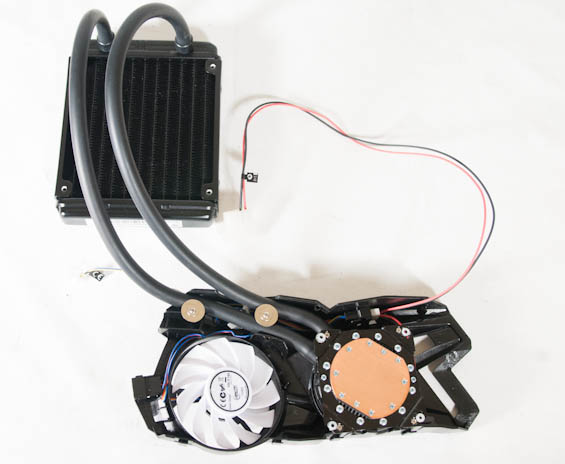 The four clear spacers covering the mounting points of the waterblock have to have adhesive applied to their backs, and they're all roughly the size of a Grape Nut. This requires a ridiculous amount of precision, and I hope your hands are steadier than mine. Arctic Cooling could've done us all a huge solid by including these spacers pre-adhered like the rubber pads used to cushion the waterblock instead of making us remove tiny circles of double-sided adhesive. You also have to refer to their included table to see which spacers to use, as certain cards require 1.5mm spacers (like the GTX 680) while others require 4mm spacers. From there, you'll have to connect the power plug off of the waterblock to a header inside the shroud located just above the block.