As mentioned in the previous page, this memory kit has some immediate challengers in and around the price range for the capacity:

The $145 and $155 2x8 GB kits from G.Skill really shoot across the bow of the GeIL ship Evo Veloce in the same capacities, but most of the 4x4 GB $150 DDR3-2400 C10 kits also offer better XMP sub-timings for the same price, meaning the advantage of the Evo Veloce is obviously memory density per module.

We must thank the following companies for kindly donating hardware for our test bed:

With our overview of the ASUS Republic of Gamers range of products, one piece of software caught my eye while I was testing.  The ASUS MemTweakIt allows for almost complete control of the memory subtimings while in the OS, such that users can optimize their settings for memory reads, memory writes, or for pushing the boundaries.  The upshot of this software in our context is that it takes all the sub-timings and settings and condenses them into a score.  As the memory kits we test contain XMP profiles, these profiles determine a large majority of the sub-timings on the kit and how aggressive a memory manufacturer is.  We should see this represented in our MemTweakIt score.

As we do not know the formula by which ASUS calculates this value, it has to be taken with a pinch of salt.  It could be weighted in favor of one of the settings versus the other.  Normally I would not put such an non-descript benchmark as part of our testing suite, but the MemTweakIt software does give us one descriptor – it gives us a theoretical rate of improvement across the range of kits we test, and allows us to order them in the way they should perform.  With this being said, the results for our kits are as follows: 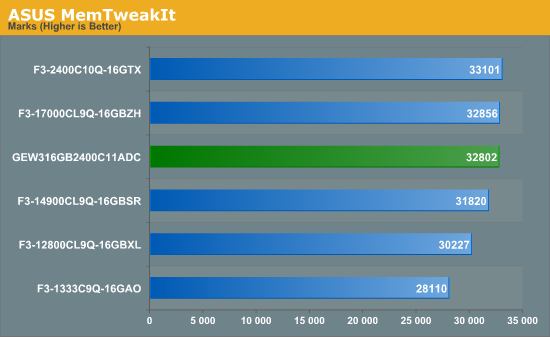 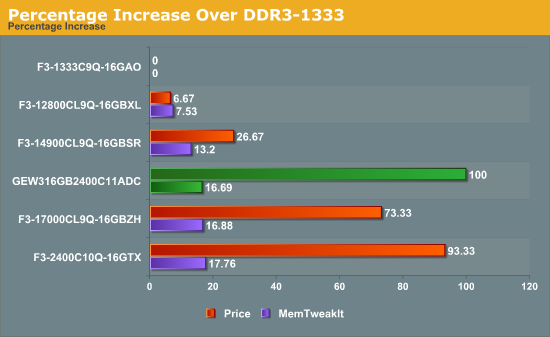