Getting back to the switchable graphics, AMD has gone through a variety of names over the years. Here’s AMD’s summary slide, which I’ll discuss in detail: 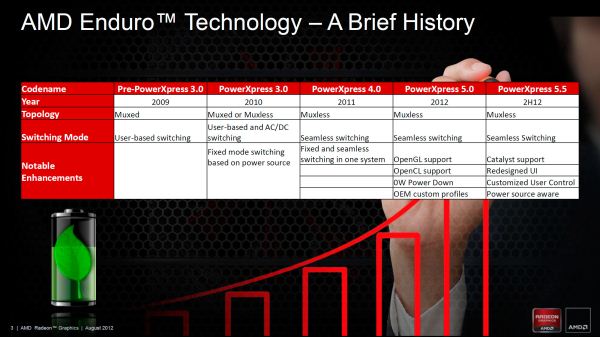 Originally introduced as PowerXpress back in 2008, the first AMD switchable graphics solutions were like that found later in the ASUS UL80Vt and similar laptops: you had to flip a switch, and in the first iterations you would then need to reboot the laptop so that the BIOS could disable the discrete GPU and activate the integrated GPU. It was messy and a bit inconvenient, and NVIDIA’s early studies showed that many users ended up not using the feature—they would either run on dGPU all the time or on iGPU all the time. Both AMD and NVIDIA had a second series of switchable graphics designs where the need to reboot was removed; the first Alienware M11x could switch GPUs in about 10-15 seconds, and the same was true of HP’s first ENVY laptops. These were using PowerXpress 2.0 and 3.0, and for most people the switching side was adequate: you’d run on dGPU when plugged in and switch to iGPU when on battery power.

Last year, AMD took a step forward with their switchable graphics by introducing PowerXpress 4.0, which also renamed the technology to Dynamic Switchable Graphics (DSG for short). I got a chance to do a head-to-head of the technology using a Sony VAIO C laptop provided by NVIDIA. You know a company is confident that they’re going to win a technology comparison when they’ll actually give you a competitor’s product. In some cases, DSG was just as good as Optimus: you could launch a supported game and never realize all the extra stuff happening in the background; unfortunately, there were several titles where it wasn’t quite as convenient as we would have liked, and OpenGL support from DSG was completely missing.

Step forward to early 2012 and we got another update to PowerXpress 5.0 (note that PowerXpress is now only used internally by AMD and hasn’t been their marketing name since before PX4.0) along with a rechristening: Dynamic Switchable Graphics was out and Enduro was in. If nothing else, at least it makes my job easier as Enduro is much more concise. There's also the fact that the GPUs are no longer "switching", as the iGPU is always running; now the dGPU is simply supplementing the iGPU when needed. Along with the name change, AMD added OpenGL and OpenCL support to the mix, and with their Zero Core Technology (which is also part of their 7000 series desktop GPUs—a case of mobile design influencing desktops) the need to keep a small portion of the chip alive (aka BACO: Bus Active Chip Off) was removed. OEMs could also ship with custom profiles for applications, so for example Dell might want all of their extra utilities to default to running on the iGPU. 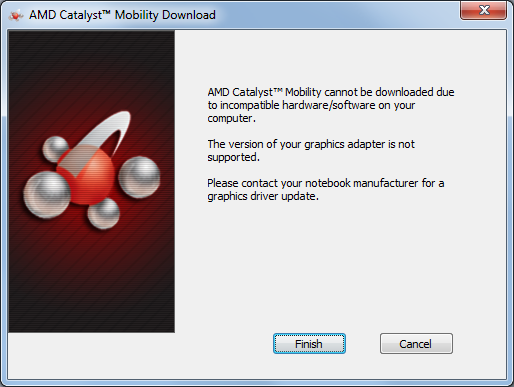 Hopefully this problem goes away next month!

Other than those changes, the UI and driver updates situation on early Enduro solutions remains largely the same as with DSG/PX4.0—and that’s what I initially received with the Clevo P170EM, with drivers from around March 2012. A quick check at AMD’s site also let me know that there weren’t any new drivers available, as the P170EM wasn’t currently supported by the latest Mobility Catalyst drivers.