In and Around the HP Envy 14 Spectre

As I mentioned before, HP's Envy 14 Spectre may have clear inspirations for its design, but is a unique product in and of itself. For the Spectre HP went whole hog with aluminum and glass, and I'll admit that it's very interesting to see a notebook use glass on surfaces other than the trackpad (which many high end and enterprise notebooks do). The result of the aluminum and glass design is a notebook that at least feels sturdy in the hand, if a bit heavy.

It starts with the lid, which has a black aluminum trim and essentially sandwiches the display between two pieces of solid glass. The lid itself is very rigid, with only the most minimal amount of flex, and it's capable of photographing attractively, but it does suffer from two flaws. First, because it's glass it has a very glossy finish that can be hard to keep clean; that's not a major problem since we've been coping with gloss on notebooks for some time now. The second is that jostling even the hinge or the glass, front or back, can cause ripples in the display. On our review unit, the bottom corners of the screen shimmer a little bit when you open or close the lid or adjust the hinge.

And what a hinge. The Envy 14 Spectre is attractive and the hinges are sturdy, but they're almost too tight; I actually had a little bit of trouble opening and closing the notebook. There's a very small plastic lip on the lid for opening it up, but it's a two hand job, and that lip is almost too small. 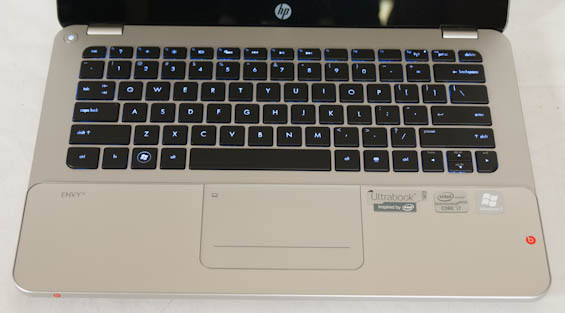 When you do open the Spectre, you're greeted with HP's signature backlit keyboard along with a glass palmrest, glass clickpad, and glowing Beats audio logo in the bottom right corner. HP is employing the same keyboard pretty much across their entire line, but I don't have any complaints; as far as chiclet keyboards go it's among my favorites. I must be getting used to clickpads, too, because the one used here is fairly easy to use. HP also includes a volume dial on the right side of the notebook, but I'm sorry to say this is not an analog volume dial. Oddly enough it seems to have its poles crossed, too; scrolling towards you turns volume up, while scrolling away turns it down. 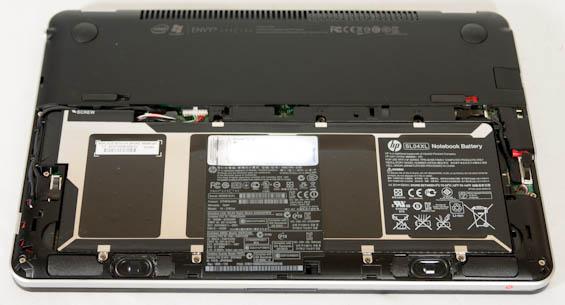 Finally, the bottom of the Spectre is a soft-touch plastic, and consumers of the world rejoice: the battery is removable and upgradeable. You'll have to actually unscrew it with a torx screwdriver, but you can get to it, proving you can still get a fairly slim form factor and be able to replace parts. Apple should consider taking notes.

The HP Envy 14 Spectre is certainly a sight to behold and attractive on its own, but I can't help but nitpick. It's true that glass is an attractive material, but there's a reason it's seldom employed to this extent on notebooks: it's heavy. There's something about the feel of the Spectre; it's heavy in the hand and feels very dense. Some users will undoubtedly appreciate that solid feeling. I also feel like practical sacrifices have been made in the name of aesthetics: the hinge is almost too stiff, the rippling at the bottom corners of the display whenever the lid is jostled is worrisome, and the glass surfaces will be difficult to keep clean.

Ultimately, the aesthetics and practicality of the Spectre are going to be a matter of individual taste, which I think is part of what HP is going for.