In the process of working on the Nexus 7 review I dusted off (literally) my Kindle Fire, powered it up and checked for updates expecting to find tons. I found none. The Kindle Fire is still running 6.3.1, released a few months ago, and more importantly it's still relying on the CPU for a lot of drawing, which means the UI isn't smooth. Scrolling in Amazon's Silk Browser is fast, but only because the Kindle Fire drops a lot of animation frames. The experience is jarring, and much better on the Nexus 7 by comparison.

While the Kindle Fire's OS looks like a polished, previous generation of Android, Android 4.1 delivers much of the smoothness of the iPad's iOS. Don't get me wrong, there are still some rough edges and hiccups. Project butter or not, Android 4.1's UI performance is still not perfect, but it's nearly so, and it's miles better than the Kindle Fire. 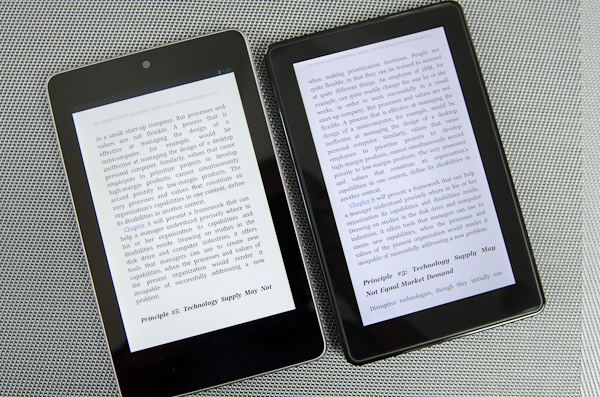 The Kindle Fire's carousel of previously used apps and media is smooth, but browsing the web on it is a mess compared to the Nexus 7. What's even more embarrassing for the Fire is even the Kindle app on the Nexus 7 delivers a smoother experience. Couple that with a warmer display and you actually have a better Kindle in the Nexus 7 than with Amazon's own device. When the Kindle Fire was released, its imperfections were easily overlooked since the Fire was so much better than any prior $199 tablets. The Nexus 7 dramatically raised the bar in the experience department.

Even compared to the Transformer Pad Infinity, the Nexus 7 feels faster thanks to UI speed improvements in Jelly Bean. The entire OS feels snappier, despite running on technically slower hardware.

What sets a tablet apart from a smartphone isn't just physical size, but also applications that take advantage of the size/resolution. Google attempts to deliver this with giant widgets that serve as portals to your content. The My Library widget automatically populates itself with books, magazines and movies you've purchased from the Google Play store. The result is quite impressive: 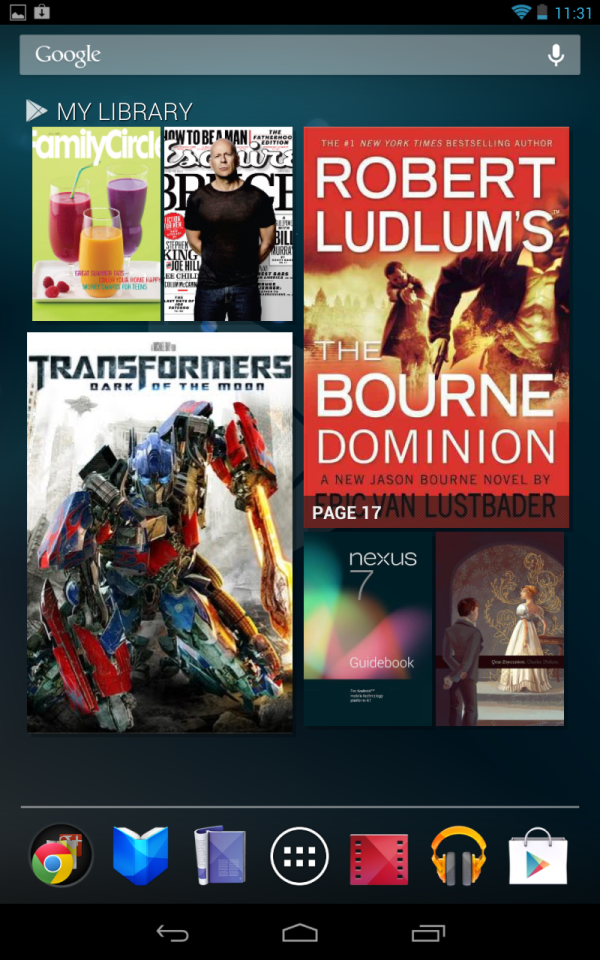 Start adding more conventional shortcuts to your home screen and the illusion quickly collapses, but I do believe the well laid out main home screen is what Google originally intended with widgets on Android.

As an eReader I'd argue the Nexus 7 is at least as good as the Kindle Fire. You can debate the pros/cons of books from Google Play vs. Amazon's Kindle store, but the fact is that both are available on the Nexus 7. The Kindle app for Android works well (as I've already mentioned), although for actual shopping you'll have to use Amazon's website. A small price to pay for a much better tablet experience everywhere else.

In all honesty, that's what you really give up when picking the Nexus 7 over the Kindle Fire - you lose the tightly integrated Amazon shopping experience. You also lose Amazon's video streaming service, which presently doesn't have an Android client.