Android 4.1 is the newest release of Android, and in keeping with the dessert-alphabet naming scheme, goes by the name of Jelly Bean. Henceforth you'll see JB or 4.1 interchangeably. Google sampled me another Galaxy Nexus, running the same build of Android 4.1 that was handed out to Google I/O attendees today. This isn't the final version that will be pushed out in July, but is close to final – or at least final enough to give to a few thousand attendees and press.

I mentioned in the pipeline post about Android 4.1 that I heard UI performance was going to be a big emphasis in 4.1, that Google wanted to make the UI "smooth as butter" everywhere possible. Today seeing the announcement of Project Butter comes as no surprise, and represents further optimization to the hardware accelerated OpenGL ES render path that was introduced in Android 3.0 Honeycomb, and further improved in Android 4.0.x with more graphics primitives, making moving to it easier for developers.

In Android 4.1, the improvements that are under Project Butter are really four things:

The result of these improvements is that the Galaxy Nexus feels like a different device to me with Android 4.1. It isn't huge, but the trouble spots that used to annoy the heck out of me with Galaxy Nexus and 4.0.4 are now largely smoothed over. That's not to say it's perfect, but it's clear Google has invested time (finally) into mitigating some of Android's lingering UI choppiness.

I wanted to show this on video, however my DSLR only captures at 24 FPS which would make it pretty difficult to see dropped frames. I brought my other Galaxy Nexus with 4.0.4 and put it alongside the 4.1 device, and there's a substantial difference in trouble areas.

Some of those trouble spots included: scrolling the applications launcher into the widgets tab, the task switcher, screenshot compress and fade animation, application launch / close, and scrolling list boxes. In the case of the task switcher (which was not smooth in 4.0.4), the animation is now finally one that doesn't drop frames left and right. It is a huge difference. The others just feel better. I've also noticed that a number of other primary UI transitions have been somewhat simplified from a squeeze and fade to just a translation up or down across the screen. I think some might make the case that this is just optimization by removing transition flashiness, but on the whole the result is a much snappier interface.

I still feel like the SGX 540 running at non-max clocks inside the Galaxy Nexus' OMAP4460 is overburdened, but with the right SoC Android 4.1 is going to scream. On the Nexus 7, the interface is very close to being fluid everywhere. I'm very impressed with performance on that device.

While we're talking about settings related improvements, the settings page gets some reorganization, including putting accounts right on the settings page, and under WiFi are new toggles for WiFi direct, and WPS pairing. Google has also changed up the toggles in 4.1, from the slanted, almost razor-blade like sliders to just plain switches. Another subtle thing is a change under About Phone -> Status: the network type indicator now shows "HSPA+" instead of "HSPAP" which previously confused users.

There are some other new UI related 4.1 features. First up, notifications shade gets a dramatic improvement, including support for action to be taken right from the notification menu, such as dismissing a calendar alert, declining a call, or sharing photos. The top entry in the list also gets shown off in a larger box, and includes more detail. The bar also includes a rotation lock for tablets, and moves higher up on the display, obscuring the status bar indicators. The lock screen also gets an updated look, and a shortcut to Google Now.

Widgets are also automatically resizeable and reposition themselves in 4.1, which is a subtle but important improvement over the rigidity of the AOSP home screen in 4.0. I feel like a lot of these subtle improvements are inherited from various skins and 3rd party customizations, which makes sense. Third party widgets will need an update to support official resizing. 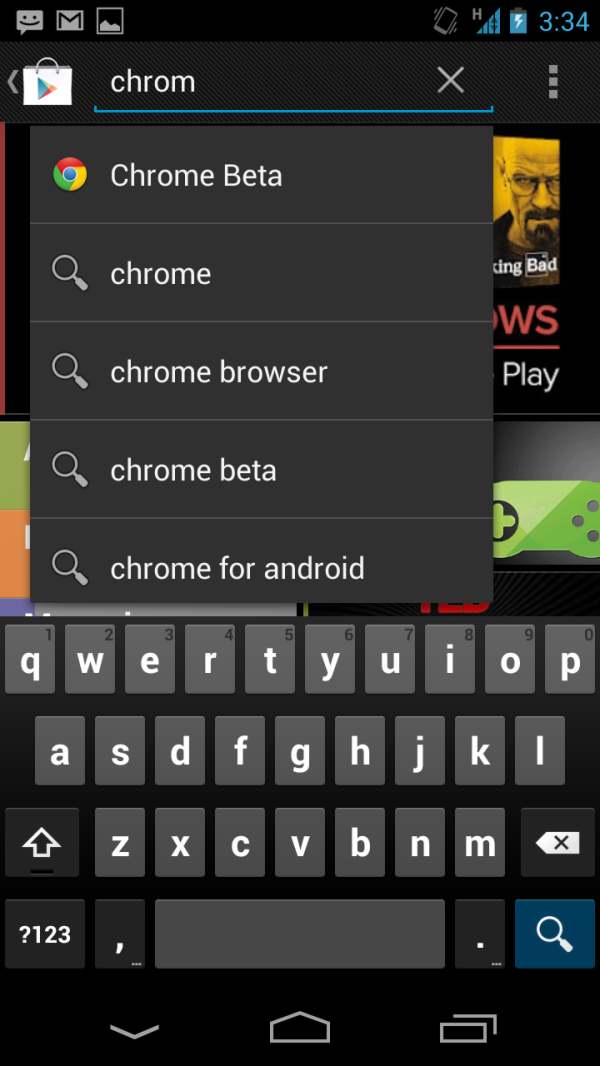 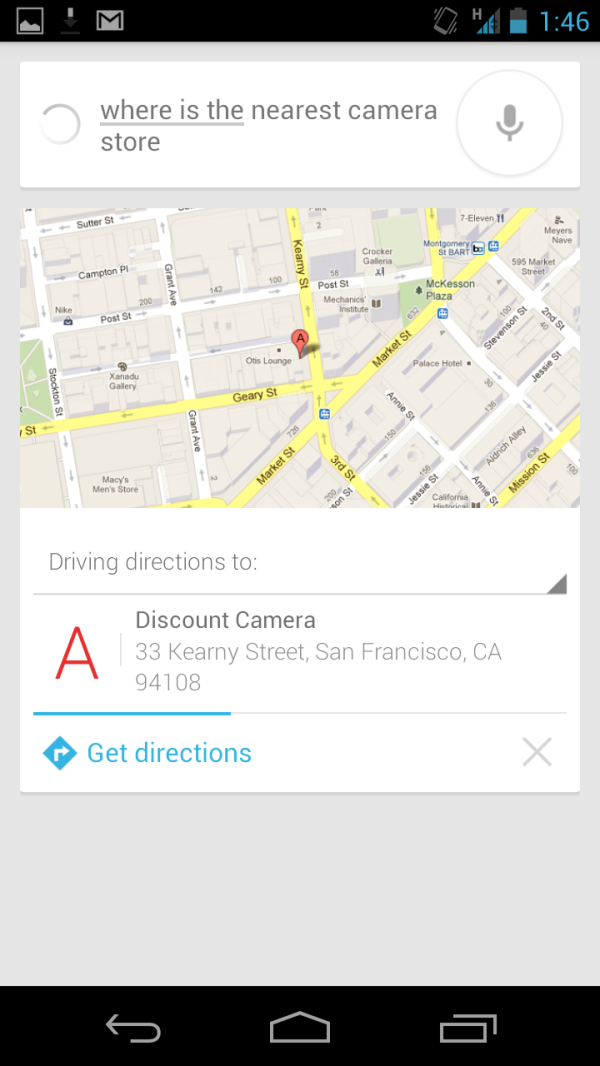 The keyboard also gets some improvements, including support for additional languages, and an expanded dictionary. One subtle change is that when you have the keyboard up, the back symbol changes to a down caret, which will no doubt make that UI step easier to grasp for new users.

Google's answer to Siri is a two pronged approach - improved voice search with offline voice recognition, and semantic data results to those queries. In practice, the use paradigm is almost exactly like Siri, though the approach Google demonstrated is a bit less conversational. I have only had time to ask a few queries (such as the above search for a camera store for a new battery charger), but voice recognition does indeed work with no cellular connectivity, though you do lose the confidence level underline under words. Part of the better Google search idea is Google Now, which Google believes so strongly in, it dedicated an entire shortcut to it.

Camera UI gets an overhaul and now reminds me of the Windows Phone 7 approach. You can swipe left to view the previous captured images, while the live preview remains live and slides off the screen. Photos can be deleted by then dragging up, like dismissing a card in webOS. This is also nice and smooth throughout. Android 4.1 also adds a new capture animation, but oddly enough I couldn't grab a screenshot of it.

While the Nexus 7 formally replaces Browser with Chrome (sans beta as of today), Android 4.1 proper on the Galaxy Nexus and other devices will retain Browser for some time. That web browsing experience gets improved in 4.1 with better support for HTML5 video, better rendering performance and memory usage, and further improvements to the V8 JavaScript engine. In browsermark and sunspider the difference in V8 is pretty dramatic, elsewhere there isn't a big change at all, as it's the same core version of webkit, just optimized more.

There are more changes as well, including binary diff / delta update support for updating marketplace applications. Google has done the usual thing and outlined all of those other changes on their developers page for Jelly Bean. It's impossible to pass judgment on Android 4.1 after just 12 hours with both an updated Galaxy Nexus (with my primary SIM inside) and the Nexus 7, but thus far the improvements to UI smoothness have made a noticeable difference. Beyond that, probably the second most appreciable difference is in notifications, which now conveys much more information for things like new mail beyond the subject line and sender. The other thing to note is that again, this Android 4.1 isn't 100% final, but it is extremely close. I haven't seen any glitchiness yet, but obviously there will be changes before the final mid-July OTA update for Galaxy Nexus devices and others that were announced in the keynote. I'm looking forward to digging up the other subtle things that are new in Android 4.1 and updating if necessary.