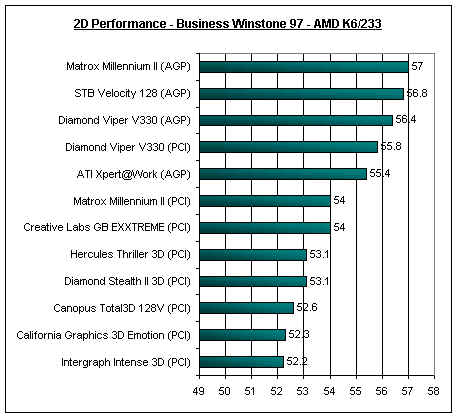 A killer 2D card for your K6?  The AGP Matrox Millennium II seems to be the clear answer in both High End and Business Application tests.  While only a few tenths of a point faster than the STB Velocity and Diamond Viper in the Business Application tests, the AGP Millennium II is approximately 5% faster than the 2nd place ATI Xpert@Work when it comes to High End applications such as CAD/Engineering apps, etc...

Although the Millennium II does come out above the competition in the 2D tests you must take into account that the Millennium II has very little girth when it comes to 3D acceleration, in which case the Diamond Viper and STB Velocity, both Riva 128 based cards, appear to be much more well rounded choices for the AMD K6. 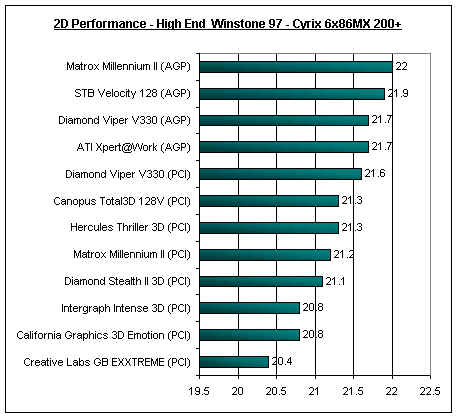 We have the same picture here, the Millennium II (AGP) comes out on top, closely followed by the STB Velocity and Diamond Viper (both AGP).  If all you're looking for is 2D acceleration then the clear choice is of course, the outstanding AGP Millennium II, however for the most well rounded card in these tests you probably want to lean towards one of the Riva based alternatives.

Holding up the rear of this comparison are the two Voodoo Rush based cards (Intergraph Intense 3D and California Graphics 3D Emotion) along with the two Rendition V2x00 cards (Diamond Stealth II 3D and Hercules Thriller 3D).   Surprisingly enough, the PCI Millennium II, can also be classified with those cards which came up under par in the comparison.  This just goes to show you how much the Accelerated Graphics Port (see AGP Guide).  The exxtremely powerful Permedia 2 based Graphics Blaster EXXTREME from Creative Labs comes in a dead last place in the Cyrix 6x86MX tests which will continue to be its home until we move out of the Socket-7 arena.