My first meeting of Computex wasn't a meeting at all, rather it was Acer's press conference a day before the show officially started. In its press conference, Acer introduced a top to bottom lineup of touch enabled Windows 8 devices. 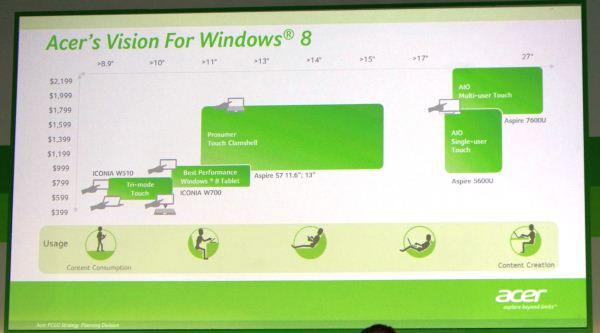 Among the list were two particularly interesting tablets: the Iconia W510 and W700. The former is an Atom (Clovertrail) based tablet with Transformer-style keyboard dock, while the latter is a full fledged Ivy Bridge based tablet. On my last day in Taipei I managed to secure some extended hands on time with the W700. I'm always asked what I was most impressed by at any trade show, and I'd have to say for this Computex it was definitely Acer's W700. It's not just a good device, but it's also the start of something very big.

At first glance Acer's entire Windows 8 lineup looks significantly improved from the company we knew just a few months ago. There's a lot more attention paid to styling, ergonomics and the user experience of these new Windows 8 devices. For example, where we could once complain about subpar displays, the W700 puts an end to that with its 11.6-inch 1080p IPS panel. 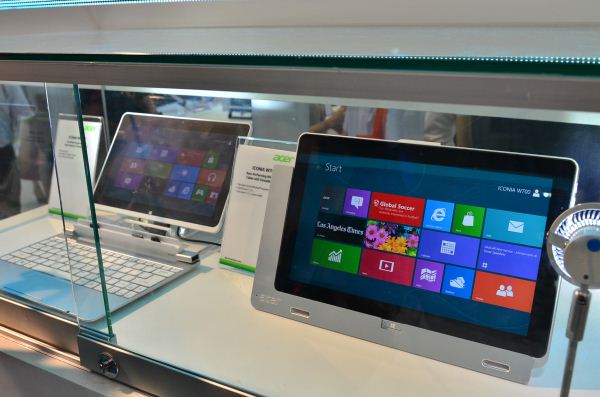 The W700's build quality is excellent, however the handful of devices that exist in the world today were all hand built. I was surprised to find fairly polished Windows 8 tablets at Computex, and it turns out I was right to be surprised. Everyone worked overtime to get devices ready by Computex, in most cases resorting hand building prototypes to the tune of $10K a piece. What we saw at the show is by no means ready for retail. You can expect the final materials list, thickness and weight to improve by the time it launches. And yes, the W700 will be a launch vehicle for Windows 8.

Performance: Much Better than an ARM Tablet

It's no surprise that Acer was able to pull the W700 off, word has it that Intel itself offered a lot of help with the design and optimization of the W700. It's not uncommon for Intel to help its partners. In the past it has done so for Apple. In this case Intel has a vested interest in making sure that more than just Apple are able to produce compelling products in the market. Apple's Tim Cook understands the supply chain very well. As Intel is one of the largest if not the largest consumer of cost in Apple's Mac bill of materials, it runs the risk of facing cost "optimization". Intel's aid to Acer can be viewed as diversifying its portfolio if you will.

The W700 is understandably fast. Intel isn't talking about CPU specifics, likely because the final configuration isn't decided yet. There's clearly an ultra-low voltage Ivy Bridge inside but I suspect this is more than just another Ultrabook chip. For the launch of the original MacBook Air Intel introduced a small form factor package and specially binned low-power CPU/chipset combination to meet Apple's design requirements. I bet Intel has done something similar here for Acer (maybe not on the packaging side, but definitely when it comes to silicon). 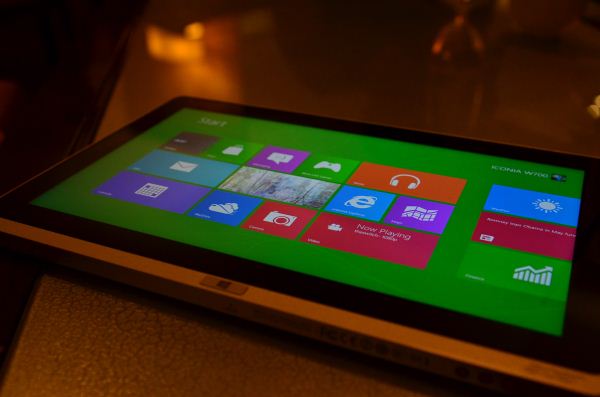 Even running a well underclocked Ivy Bridge it's far smoother and more capable than any ARM or Atom based tablet. As Metro is designed to be responsive on much slower hardware, it simply flies on Ivy. There are still a number of rough edges that Microsoft needs to work on. The Windows 8 release preview isn't as polished and consistently smooth as iOS is, but I suppose that's why it's a release preview and not a final build of the OS. As long as Microsoft focuses on delivering consistent UI behavior (not just frame rate) across the board I see no reason Windows 8 can't do exactly what iOS has done.

The CPU is actively cooled, but in my use of the device I couldn't hear the fans nor did the tablet ever get uncomfortably warm. Admittedly I didn't try editing anything in Photoshop or run Cinebench on the machine.

Connectivity is very well done on the W700. While Acer isn't talking about wireless options, there's a plastic strip across the aluminum back that could be home to more than just WiFi antennas. If Acer wants to charge a premium for the W700, it needs to be able to offer LTE and GPS similar to the higher priced iPads. 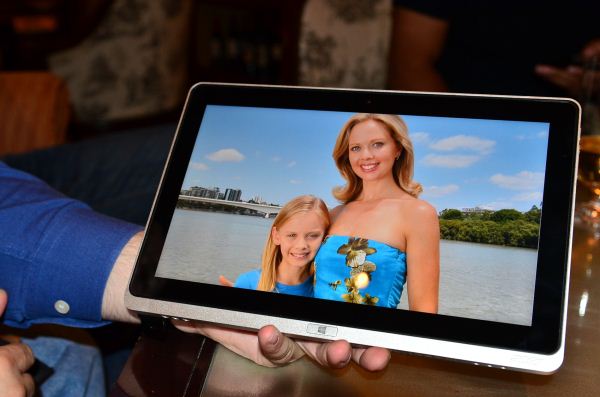 Thanks to Ivy's 7-series chipset there's a single USB 3.0 port on the tablet itself. Acer isn't talking about what specific storage is used inside, but storage performance should be significantly better than what you're used to from a conventional ARM based tablet with a single piece of NAND. Intel copied a bunch of 36MP images from a Nikon D800 over USB 3.0 to the W700's internal storage. Not only did the transfer go extremely quickly (think notebook quick, not tablet quick), but flipping through the 36MP JPEGs was as fast as you'd expect from a desktop. Occasionally the system would take a second or so before the displayed image became sharp, but that only happened when flipping through a folder of images very quickly. The W700 is basically a laptop without the keyboard - you can expect it to have laptop hardware inside.

The W700 doesn't have the optional keyboard dock of the W510, likely because it would be too top heavy. Acer does make a presentation dock that you can use with a wireless keyboard. Either Acer or third party manufacturers could build a case with integrated keyboard similar to what exists for the iPad today. 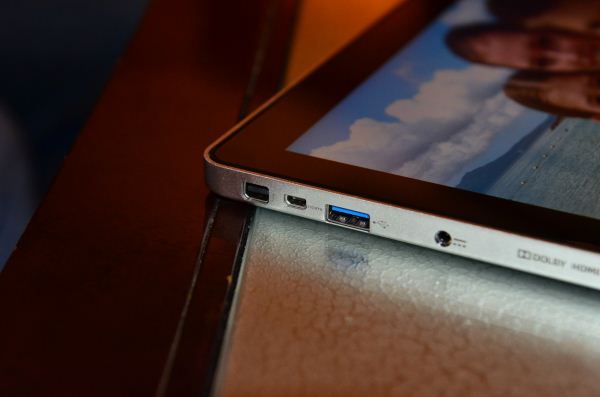 Here's where things get exciting. The Iconia W700 has a Thunderbolt port. It could theoretically serve as a tablet, that's also a notebook that's also your desktop. Local storage will be limited to whatever is inside the chassis, but you could easily have an external disk array giving you terabytes of high-speed local storage when in desktop mode. Remember the old holy grail that we once believed we had to rely on the cloud for: all your content, any time, any where. With the W700 as your tablet, notebook and desktop, by default you get almost all of that without ever relying on a wireless connection.

You could even theoretically have an external discrete GPU connected via Thunderbolt using something like MSI's GUS chassis. While I seriously doubt we'll see this in time for launch (or during the W700's lifespan), it is possible to experiment with docks that would enhance cooling, allowing Ivy Bridge's configurable TDP to go to work.

The W700 is admittedly thicker than I'd like. It's comfortable to hold but you can't one-hand it for long and it's best used when propped up against something like your leg or the edge of a table. Haswell should help thin things out - and 14nm Broadwell will put the issue to rest entirely. Even with just Ivy Bridge however, the W700 is the beginning of something special. An ultra portable device that can truly serve as everything from a tablet to your desktop. I don't know that the W700 is an iPad competitor, but it will offer an option for those users who want to consolidate their devices. 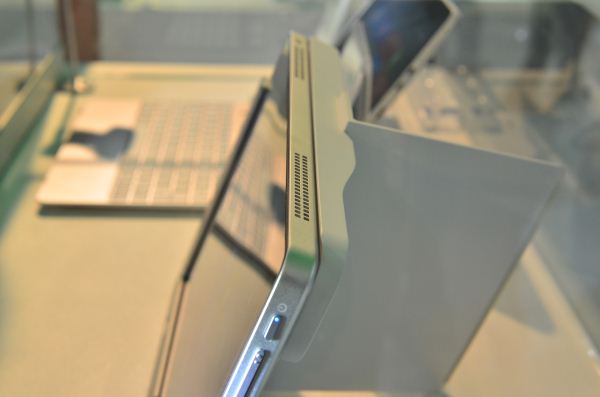 Pricing is unknown, however Acer and Intel are currently working on optimizing the design to make it price competitive with the higher end iPad configurations. The slide above has the W700 starting somewhere around $799 and going up to $999. The latter I believe is too high. If Acer can deliver the W700 with LTE, Thunderbolt and a a 64GB SSD for $799 I think it's an easy recommendation.

The onus is on Microsoft to quickly enable compelling Metro applications. At the introduction of the new iPad with iPhoto, Apple talked about the tablet being a great tool for photographers to quickly preview and do minor edits on photos while on location. The W700 and similar tablets running Windows 8 could be that and more, but Microsoft needs the right applications to take advantage of it. The amount of marketing muscle Microsoft is putting behind Windows 8 and Metro apps, combined with the sheer power of tablets like the W700 gives me hope that app developers will quickly flock to the platform to really take advantage of it. 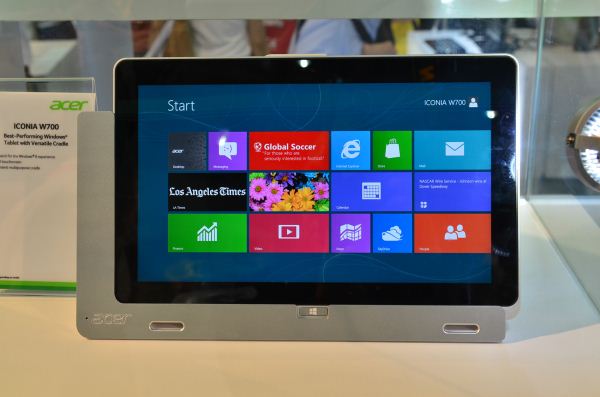 The world is changing and for the first time in years, Microsoft and Intel appear to be the ones leading that change.