Replacing my HTPC with a mini ITX System

Free time is hard to come by these days. Since the beginning of the year I've hit Vegas, Barcelona, Santa Clara, New York, Santa Clara (again), Austin, Seattle, Chicago, Santa Clara (again) and Folsom. Before the end of June I'll add Taipei, San Francisco and Seattle again to the list. My travel schedule as of late has taken its toll on a number of things, one of which has been my ability to spend much time in the theater I built a while ago, inspired by this old AVS forum thread.

I've needed to rebuild the HTPC in there for a while. Truth be told, my most reliable HTPC was an old AMD 780G platform (Gigabyte's GA-78GM-S2H) but it lacked the HD audio bitstreaming capabilities that I was looking for. Since then I've tried adding sound cards with bitstream audio support, played with ION, experimented with Boxee, and finally moved to a Clarkdale based HTPC. All of these solutions had their quirks and for whatever reason none was quite as stable and appliance-like as the original 780G. That's usually how things go however. If it ain't broke, don't fix it right?

Times have changed however. The trend towards remote mass storage and smaller form factors applies just as well to HTPCs. Four years ago when I started thinking about the HTPC and theater I wanted a chassis that could accommodate a bunch of 1TB drives for holding all of my content. As a result, the HTPC chassis had to be much bigger than necessary. Improvements on the SoC front meant that I could almost drive the whole theater off of something Atom based, although Intel dropping the ball on serious Atom GPUs and pushing NVIDIA out of the market meant that solution wasn't going to work.

Whenever I finish a big review, especially one that I put together under an incredible time crunch, I like to take a little bit of time to do something fun. Whether it's going out for a drive or actually play one of the many games I'm constantly testing, it's a necessary part of the post-review process. It keeps me sane. After the Zenbook Prime review posted, I had a little bit of time while running data for the follow-up. I also had a stack of hardware I'd been assembling to tackle the sad state of my unstable and presently unracked HTPC. Partially out of a desire to clean the lab up a bit, I started piecing together what I hope will be the spiritual successor to my old 780G HTPC.

I've got a Promise Pegasus R6 with far too much storage driving much of my lab: benchmarks, test data, OS images, you name it. I also have a decent amount of leftover space for HT content so that became my makeshift NAS. It also meant that I didn't need room for any real storage in the HTPC, which further meant that I could go mini-ITX. Originally I expected my HTPC to remain a fixture in the theater but it turned out that I was constantly swapping components in and out as companies sent along HTPC-worthy gear that needed testing. Going mini-ITX and abandoning the idea of something large and rackmounted will make that part of my life a lot easier.

The build started with Intel's DH77DF mini-ITX board. It supports Ivy Bridge but for the time being I'm just using Intel's Pentium G850: 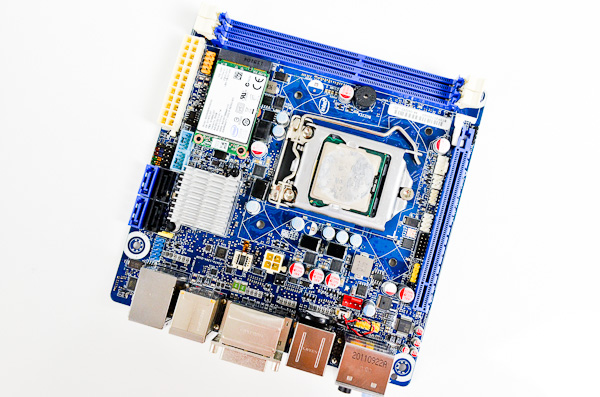 The Pentium G850 is a dual-core Sandy Bridge (32nm) based design with Intel's HD processor graphics (basically an HD 2000 without Quick Sync, BD 3D, Intel Insider and Clear Video HD). I underclocked the CPU to 1.6GHz from its stock 2.9GHz frequency as the decode block is doing much of the heavy lifting here. The stock retail heatsink/fan is capable and quiet enough given that the HTPC ends up tucked away in a corner of the room with audio easily drowning out any noise it would make. 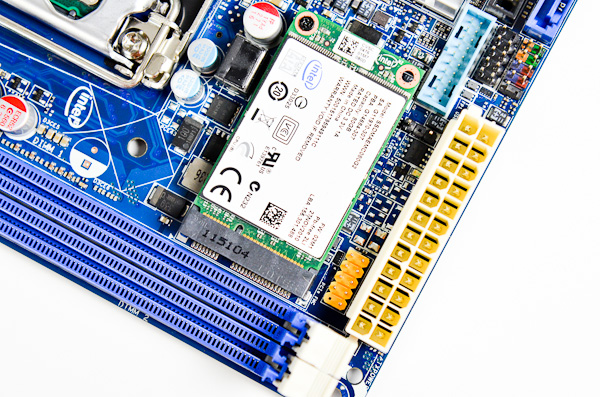 The motherboard happens to have a mini-PCIe/mSATA slot on it, giving my old Intel SSD 310 mSATA drive a purpose in life. Small SSDs make for great HTPC boot drives (silent, cool running, low chance of failure right before you want to watch a movie). The mSATA interface also removes the need for running SATA and power cables, a welcome benefit when building a cramped mini-ITX system.

For memory I needed something low profile, so I ironically turned to a bundle of AMD memory I've been wanting to do something with:

If you didn't get the memo, AMD sort of officially entered the desktop memory market recently. It's a partnership between AMD and Patriot Memory at this point, where AMD selects the components and Patriot validates, distributes and supports the AMD branded DIMMs. There's only a single DRAM vendor approved today although I hear they are trying to expand the program. From AMD's perspective it's a quick way to increase top line revenues, although the memory business isn't extremely profitable. The memory works well and more importantly it's a lot more low profile than most of the high-end DIMMs I have laying around the lab, which works for my needs.

Picking the right mini-ITX chassis was a struggle as I don't believe that there many (any?) good looking mini-ITX HTPC cases on the market today. I've been pushing Antec for years but it turns out that despite the coolness of mini-ITX, motherboards and cases built around the spec just don't sell well. I really do hope this eventually changes as companies like ASUS have been taking the form factor seriously for a while now. 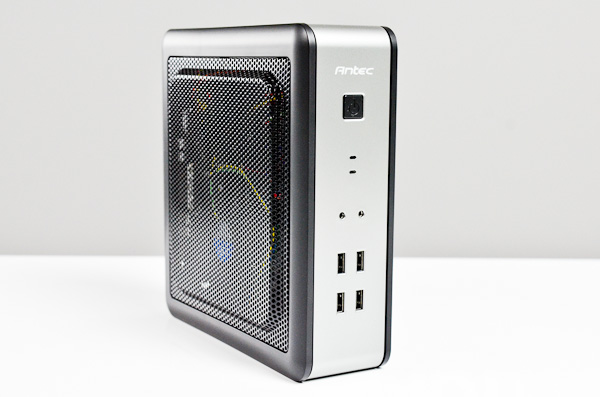 I ended up with Antec's ISK110, an admittedly non-HTPC-looking chassis but one that definitely gets the job done. Assembly was pretty simple once I realized that I had to unscrew and pull the front panel out a bit in order to get the motherboard installed. 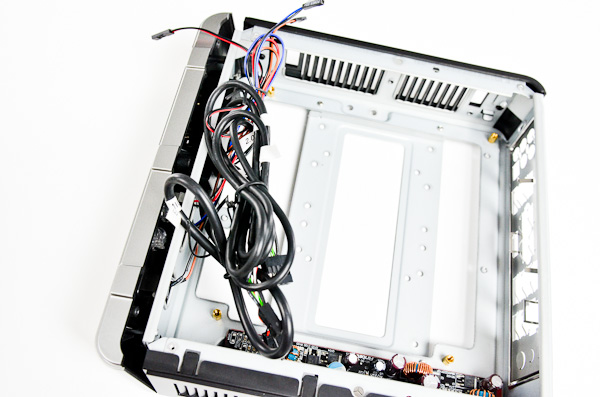 The ISK110 uses an external 90W power supply. With my underclocked Pentium G850 the entire system pulls around 23W while watching a movie and peaks at 33W when installing software/doing other more CPU intensive things. Power consumption is a bit higher than I'd like but unfortunately the Intel board doesn't allow user customizable core voltages, so I'm not able to exploit the awesome benefits of voltage scaling. 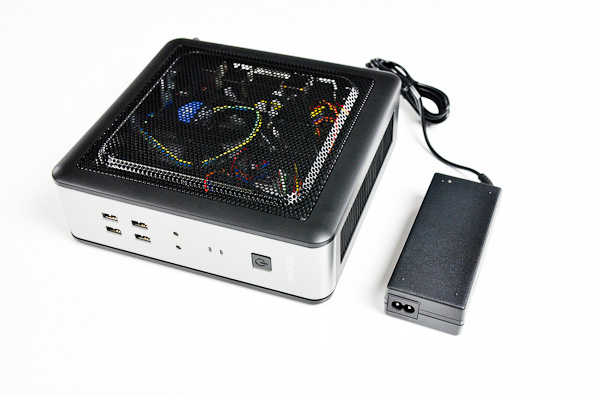 The box is running Windows 7 and XBMC, while I'll rely on the PS3 for any BDs I haven't had time to rip. I haven't yet watched a full movie on it yet but it worked well in all of my tests thus far. I'm particularly excited about the portability aspect of the machine, especially since I end up moving it around a lot more than I expected to.