The NTV200 solely concentrates on online streaming services and we have plenty of apps to choose from. Netflix, Vudu and YouTube are bound to be the most popular, and in the next few sections, we will take a look at those in detail.

Netflix users looking for 1080p as well as multi-channel HD audio (Dolby Digital Plus) will have to wait for a firmware update in the future to enable those features. With the current firmware / Netflix app version, all titles are streamed with 2 channel audio.

The gallery below shows the Netflix app in action. Note that the interface still follows the old style and doesn't have options to choose audio and subtitle features (like the one present in, say, the WDTV Live Streaming Media Player).

An important feature of the Netflix app is the adaptive bitrate streaming aspect. In layman's terms, the app seamlessly shifts to a lower bitrate stream if it recognizes that the bandwidth available is not enough to sustain the current playback bitrate. In a similar manner, it moves on to a higher quality stream as soon as the device is provided with more bandwidth.

Since the Roku 2 XS review, we have updated the video streaming testbed for media streamers. The addition of a Zyxel GS2200-24 managed switch in our network testbed has enabled us to perform more accurate bandwidth control and network traffic analysis. The NTV 200 was connected to one of the ports of the switch and this port was mirrored onto another port connected to an ASRock CoreHT 252B for further analysis. On the PC, SeriousBit's NetBalancer Pro 4.7.6 and SoftPerfect's Networx were used to create the traffic graph and measure the amount of data flowing to the NTV200.

Our Netflix test stream was the 41 minute long documentary, National Geographic: Lewis and Clark: Great Journey West. The Internet connection used was a 20 Mbps / 4 Mbps Comcast plan. In the first experiment, the PC client was used to play back the stream at the maximum possible quality (HD allowed). We see that approximately 1.1 GB of data was consumed by the PC in the process. This gives us a baseline to compare the Netflix streaming capabilities of various set top boxes. 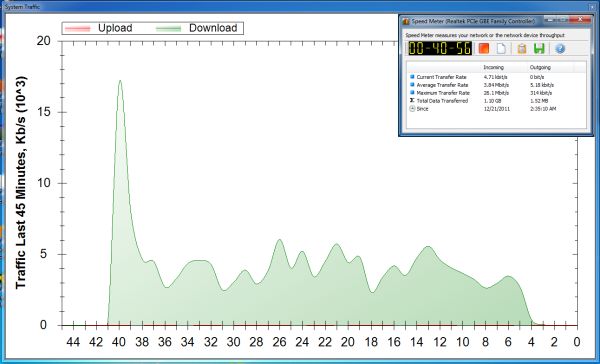 It is a known fact that the PC stream consists of WMA-encoded stereo audio at 128 kbps and 720p HD video encoded with VC-1 Advanced Profile at 2.6 and 3.8 Mbps. The SD streams come in at 1.5 Mbps. Smaller resolution streams are available for bitrates as low as 384 kbps.

Under the same conditions (maximum quality streaming), the NTV200 consumed approximately 1.14 GB of data, leading us to conclude that the audio and video quality are probably the same as that of the PC stream, except for the codecs used. 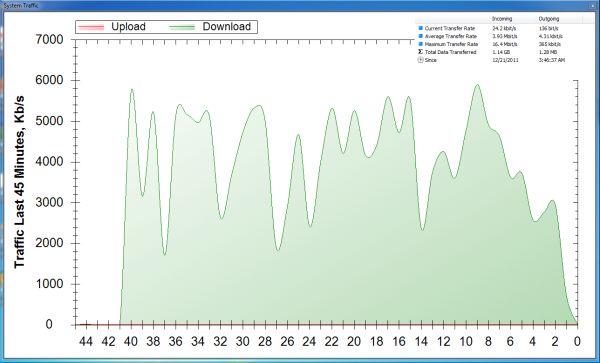 The second time around, I limited the NTV200 port to 3 Mbps / 1 Mbps (a common low-end Internet connection configuration) for the first 14 minutes of the stream (43 to 29 minutes in the traffic graph below). Visually, it was quite obvious that the NTV200 settled down on a non-HD encode. The traffic graph characteristics seem to indicate a 1.5 Mbps video stream being downloaded. After 14 minutes, the bandwidth limitations were removed. 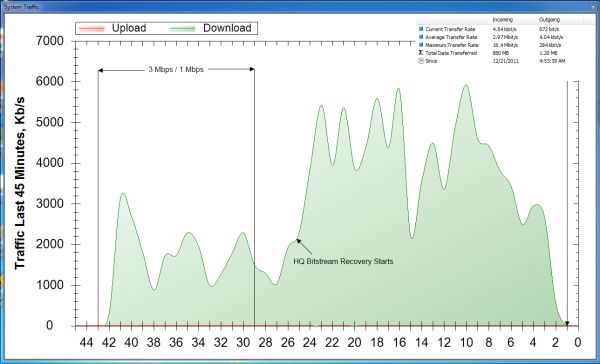 The NTV200 continued to buffer the old bitrate stream for around 4 minutes before recognizing that more bandwidth was available. Visually, I could see a shift to the HD stream around the 23 minute mark (around 6 minutes after removal of the bandwidth restrictions).

The Vudu app on the NTV200 is a pleasure to use compared to the unattractive Netflix app. Some screenshots of the Vudu interface are given below. The Vudu app supports a movie jukebox experience, with lots of details about the selected titles.

In order to ensure that the user has enough bandwidth for their streams, Vudu provides a network speed test in their setup process. In addition, they also have 2 minute previews of their streams. After taking the speed test, we played a couple of 2 minute HDX movie clips without issues. We were even able to get 7.1 channel Dolby Digital Plus bitstreamed to an AV receiver. The bandwidth characteristics of Vudu app shows a marked difference when compared to the Netflix app. We have an initial high speed burst followed by almost constant 9 Mbps traffic (corresponding to the HDX stream). 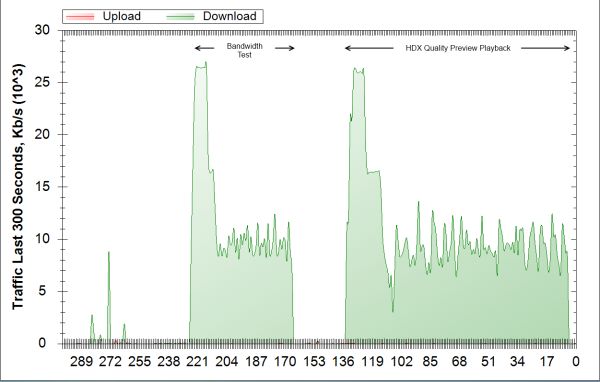 Following the initial testing, we rented the HDX title 'Pirates of the Caribbean: On Stranger Tides'. After 15 minutes of playback, the bandwidth was throttled to a 6 Mbps / 2 Mbps connection (obviously not enough for the 9 Mbps HDX stream). The playback shifted seamlessly to a lower quality stream. 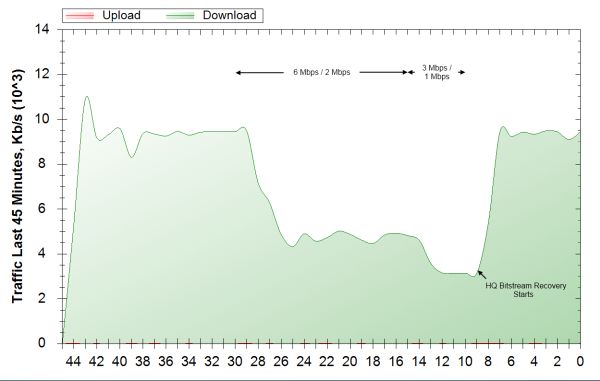 I was quite surprised at the ease with which the Vudu app handled this network bottleneck. After 15 more minutes, I throttled the connection even further to 3 Mbps / 1 Mbps. The transition to SD resolution was again seamless. After 5 more minutes, I removed the throttling, and within a minute, the app started buffering the HDX stream. A minute later, I was watching the full quality HDX stream (as indicated by the three bars in the overlay OSD during playback). Despite the intermediate shifts to video streams of lower quality, I continued to get 7.1 channel Dolby Digital Plus bitstreamed throughout the experiment. Recovery from network bottlenecks seem to be much better for the Vudu app when compared to the Netflix app.

A small detour before we press on with the rest of the review.

We thank SeriousBit for providing us with a customized build of NetBalancer Pro (with a configurable traffic timeline range) which has helped us in analyzing and presenting bandwidth characteristics in a coherent manner.