Movie tie-ins are nothing new to gaming. They crop up repeatedly throughout the industry’s history, as both successes and failures. For every good Star Wars-licensed game, there’s a bad one. For every copy of E.T. for the Atari buried in a landfill, there’s a copy of GoldenEye still being used by nostalgic Nintendo 64 fans. So it was with a potent mixture of excitement and trepidation that I approached the newest high-profile movie tie-in: Jurassic Park: The Game. What I found was something more movie than game, which falls short of truly being either.

Jurassic Park is a bit of an outlier as tie-ins go. The source material, Steven Spielberg’s film of the same name (not Michael Crichton’s twenty-one-year-old book, mind you), is sixteen years old, and Jurassic Park 4 has been "in development" since 2002. So instead of retelling of a story we already know, Telltale Games wrote their own parallel story, giving them license to nod and wink at the film without being utterly beholden to it.

As a canonical companion to the original film, Jurassic Park largely succeeds. You’ll see a few familiar locations, hear a few memorable quotes, and spend plenty of time with old friends like the velociraptor. You won’t, however, encounter any characters from the films (except some dinosaurs and the corpse of a greedy, near-sighted computer programmer). 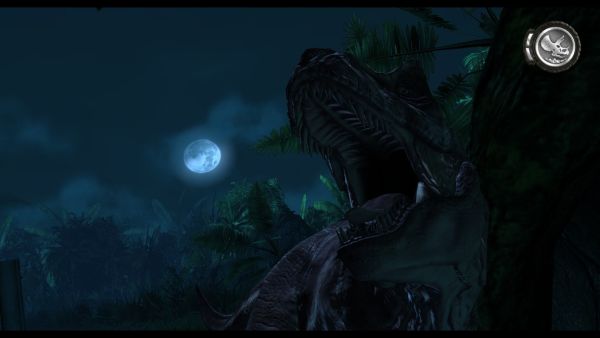 Jurassic Park’s cast is a motley crew of park employees, mercenaries, and a teenager with a penchant for petty theft. Alliances shift constantly as everyone (save the innocent father/daughter pair) fights for possession of a notorious can of shaving cream. Their story – divided into four episodes – isn’t amazing, but it moves swiftly and nimbly. You also view it from a variety of angles, taking turns controlling each character. Shifting perspectives so often kept me guessing as to some of the character’s true motives, as well as which members of my party might not make it off the island.

Now when I say “control” each character, I’m using a rather loose definition. For a product titled Jurassic Park: The Game, gameplay occupies an oddly low position on the design totem pole. Your limited interactions with the game consist of selecting perfunctory dialogue options, clicking around icon-littered environments until you touch upon the one required to advance, and going toe-to-toe with increasingly fiendish quick-time events. Most of the time, Jurassic Park is more concerned with the delivery of its plot, and if you happen to break its flow by missing a button prompt, you’ve failed.

Failure in Jurassic Park (often accompanied by a swift, grisly death at the hands of ravenous dinos) plays a significant – and frustrating – role. I found it nigh impossible not to die at least a few times in each episode, mostly because I am not psychic. During action sequences, button prompts often appear with only a vague relation to the action taking place on screen. And if you’re caught up watching the cinematic action sequence, you’ll likely miss a few prompts.

The intention seems to be to create tension: “Where will the next prompt come from?” “Will the next one you miss be one that kills you?” This tension sucked me in during an excellent rollercoaster sequence in Episode Two but wore out its welcome in the latter half of the game.

Technically, Jurassic Park is a bit scattershot. Some of the dinosaurs, particularly the T-Rex (seen above), look wonderful. Others, like the mysterious troodon, feel out of place, too cartoony. All of the infamous dinosaur sounds are there, of course, and they’re still as unnerving as ever. The humans don’t fare as well. You’ll spend a lot of time in conversations, which you’d think would be a good thing because the voice work’s actually rather good. But the lip-synching seems to just fall apart on occasion, and bizarre sound hiccups (e.g. characters’ voices echoing in the middle of a jungle) call way too much attention to themselves.

Jurassic Park is an ambitious amalgam of adventure game mechanics and cinematic aspirations, but it never quite excels in either respect. The bulk of Jurassic Park’s code is that of a blockbuster movie – action sequences, dialogue justifying the action sequences, more action sequences – but it ultimately feels incomplete and small given the setting and material it’s working with. The shallow gameplay plugs the holes but, just like frog DNA rounding out the genetic code of a dinosaur, also creates unfortunate consequences that cause the whole operation to go awry.

Franchise diehards will likely enjoy Jurassic Park: The Game (sometimes it’s enough just to hear that soaring John Williams score), but they should know they’re getting a frog in dinosaur’s clothing.

This review is based on PC retail code. Jurassic Park: The Game is available for $29.99 on PC, Mac, Xbox 360, PS3 and iPad 2. You can find the modest hardware requirements below: