Despite being clearly ultraportable, ASUS makes very few sacrifices when it comes to the keyboard . The majority of the keys on the UX21 measure ~14.5 x 13.5 mm, while only the arrow keys and top row of function keys are significantly reduced. With the exception of the delete key, which is located in the top row next to the power button, there are absolutely no awkwardly placed keys on this keyboard. ASUS did its homework here because the UX21 requires absolutely no learning curve to pick up and start typing away at full speed. It wasn't too long ago when I couldn't make such a statement about an ultraportable PC, making the Zenbook's improvement a welcome change. 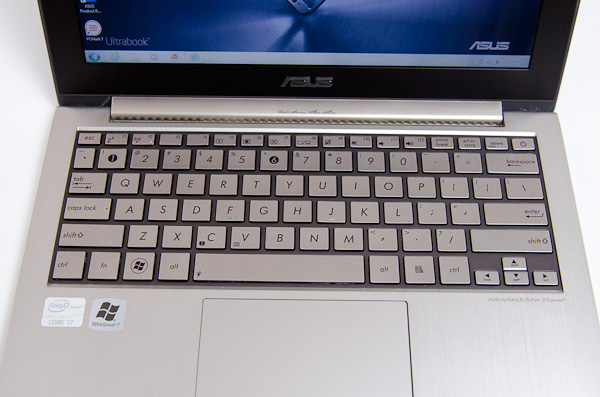 Keypresses are stiff and very distinct. The Zenbook's keyboard is almost too stiff for my tastes, although I definitely felt it loosen up over the course of this review (or I grew more used to it?). If you are a fan of keyboards that require a bit more effort to actuate the keys, the Zenbook delivers. If you're expecting a MacBook Air-like softness you won't find it here. It's not a major gripe and as I mentioned, it is something that you can get used to but it's one area where I don't believe the Zenbook is perfect. Part of the problem may actually be the material used for the keys; by using a harder material there's less give in the actual keys, which increases the impact force on your fingers.

The keyboard lacks any sort of backlight, which is only really a problem for finding which function key you're looking to hit in the dark (e.g. when trying to dim the screen in bed or on an overnight flight). While not a deal breaker, I was hoping ASUS had learned from Apple's mistake with the previous generation MacBook Air.

The system's power button is integrated into the keyboard in the upper right hand corner; it looks and feels just like a regular key. Hitting it brings up ASUS' own popup asking you what you'd like to do (sleep, shut down, restart):

The trackpad is equally well designed. It's a very large unit, something I hope we see more of across ASUS' product line, and is extremely smooth. The trackpad itself serves as a button, with the whole surface moving down with each click. Physical clicks that originate at the very bottom of the trackpad can map to left/right buttons depending on what side of the pad you click on. Anything north of there is treated as a left click. If you click with two fingers on the trackpad the click appears as a right click. Tap-to-click is enabled by default but there's no support for a tap-to-right-click. Click feedback is good and the trackpad is fairly accurate. I had to turn up the default pointer speed but otherwise left everything at stock.

The trackpad is driven by a Sentelic controller which supports multitouch gestures. You get two finger scrolling along both axes as well as three finger swipe in all four directions. You can use the three finger left/right swipe to go back/forward in a web browser, while up/down swipes will either trigger Windows + Tab or reveal the desktop, respectively. There's also pinch-to-zoom support. The gestures are pretty useful despite not being super tightly integrated into the OS.

For whatever reason, getting perfect trackpad operation is pretty difficult. I suspect it doesn't help that there are a few too many cooks in the kitchen when it comes to OS, hardware, touchpad and driver development. ASUS has put its best foot forward with the Zenbook's trackpad and although it's not perfect, ASUS is promising significant updates in the coming weeks.

So where does it have problems? Let's start with what it can't do. In almost all cases, pointer movement is disabled if the trackpad detects more than one finger on its surface. This is particularly problematic if you are used to resting your thumb on the button while guiding the pointer with your index finger. ASUS does allow you to do this, but only if your thumb rests in the click zone at the very bottom of the trackpad. The moment it moves too high, all pointer movement shuts down. You either have to be very conscious of this barrier up front or avoid the situation entirely. I occasionally found myself wondering why the trackpad wasn't responding, only to realize that my thumb was resting a bit too high on the trackpad. This wouldn't be an issue except for the fact that as a button-less trackpad where the entire surface is designed to be a button, you really should support resting your thumb anywhere on its surface so the user can mouse arund with a finger and quickly click with a thumb. Ideally the trackpad's driver would be able to distinguish between a resting finger and the user attempting a two-finger scroll/gesture.

The other major quirk I noticed with the Zenbook's trackpad was a frequent high response time after even short periods of non-use. Basically I'd be typing for a little while, go to move my mouse cursor and encounter a second or so of lag before the pointer responds to my input. The issue isn't consistent and it never seems to happen if I'm continuously using the trackpad, which leads me to believe there may be an overly aggressive power saving component of the trackpad driver at work here.

ASUS tells me it is studying the behavior of Apple's (and other competing) trackpads and is working on significant updates to the driver over the coming weeks. In fact, just after receiving my review unit there was a driver update that alone improved overall trackpad behavior. I believe ASUS when it tells me that it is quickly revving the trackpad drivers; what I'm not convinced of is where the trackpad will ultimately end up from a behavior standpoint. Is a goal of perfection feasible? I'm not sure to be honest.