Everytime NVIDIA asks me what type of games I'd like to see running on Android I always seem to answer the same way: I want good FPSes. I want mindless fun and FPSes are pretty good at delivering that, although admittedly I wouldn't mind having a Zelda or Skyrim-esque option on smartphones/tablets as well.

Shadowgun is the latest attempt at bringing a modern first person shooter to the smartphone and tablet space. Already available on the iOS App Store, Shadowgun is headed to the Android Market as well as Tegra Zone next month. NVIDIA provided us with a preview build of the game, courtesy of developer Madfinger.

The story is pretty simple. In the future megacorporations are the governments and dirty work is done by mercenaries. That's pretty much where the story ends and the shooting begins. There's not a whole lot of depth to the Shadowgun story but the gameplay is fun. 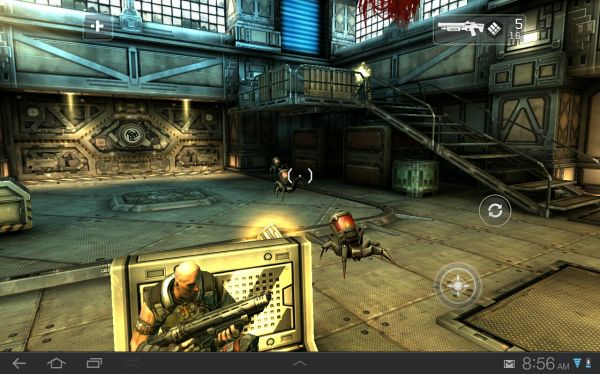 Shadowgun takes a lot of cues from the Gears of War franchise. There is a cover system (simply approach any barrier to cover behind it), which makes combat much easier on a touchscreen. Some of the enemies are also very GoW-inspired, including something that's very much like a Ticker. Level design is mostly linear, but not uncommon for a FPS.

There are three difficulty settings (easy, normal and hard). The normal difficulty setting provides enough of a challenging that you won't just breeze through the game (you actually have to take cover and pick enemies off one by one). The developer claims the single player campaign is good for around 5 - 6 hours of gameplay. There is no multiplayer support.

Controls are surprisingly decent on a touchscreen. I've been playing Shadowgun on a Samsung Galaxy Tab 8.9, which actually ends up being a great form factor for this type of game. There's a virtual left thumbstick that can be activated almost anywhere on the left hand side of the screen, as well as a fixed position virtual right thumbstick for aiming (tap-to-shoot). The usual tap-to-reload and tap-to-activate gestures apply here as well. The cover system really helps avoid a lot of face-to-face combat, which in turn makes for less frustrating gameplay compared to your typical touchscreen FPS. While I'd still prefer a physical controller, I had no problems playing Shadowgun on a touchscreen.

The sounds are decent. Nothing amazing but a step above what you'd expect from your run-of-the-mill smarpthone shooter.

The game looks great and runs very smoothly on the Tegra 2. If I had to guess I'd say we're right around 30 fps, but not much higher if at all. Check out some screenshots in the gallery below. These are all in-game, I took them myself. Depending on the price, if I wanted some mindless shooting fun on my Android device, Shadowgun might just be a good option.

Expect to find Shadowgun in Tegra Zone and the Android Market in October. NVIDIA tells us there's also a quad-core optimized version of Shadowgun coming for Kal-El.