The SATA II interface's maximum bandwidth is 3Gbps, and the latest SATA III standard maxes out at 6Gbps.  While most devices are incapable of saturating these interfaces, higher-performance SSDs and SSD arrays can often deliver in excess of 1Gbps.  Transferring data between multiple internal SSDs and SSD arrays to multiple external USB 3.0 SSDs or HDD arrays simultaneously can potentially choke a PCIe x1 interface.

Given the massive theoretical bandwidth promised by the RocketU 1144A, we wanted to see if we could find its real world limits.  The card installed easily and installing the software and drivers also proceeded without issue.  First, I grabbed the best-performing USB 3.0 flash drives from our recent USB 3.0 flash drive round up, the Patriot Supersonic Magnum, SuperTalent RC8, Patriot Supersonic, Mushkin Ventura Pro, and Kingston DataTraveler Ultimate.  Unfortunately, due to the horizontal orientation and close placement of the ports on the HighPoint controller card, I was only able to use three of the smaller drives for the test.

Inserting two of even the smallest USB 3.0 flash drives into the controller card's adjacent ports requires forcing and wedging them into position.

Unsurprisingly, Iometer indicates even our fastest flash drives are nowhere near capable of filling the RocketU's bus - not even when all three are utilized simultaneously: 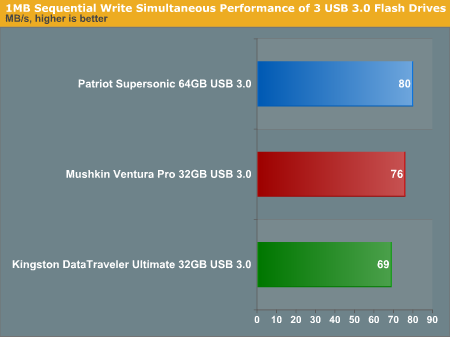 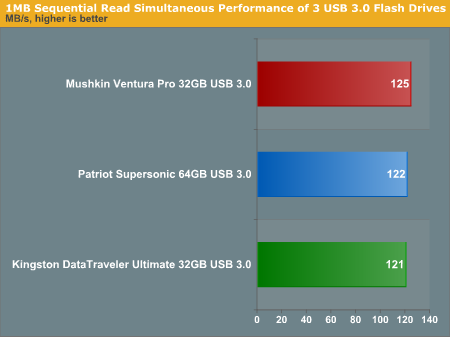 All of these simultaneous transfer rates are essentially identical to our results testing each drive individually, one at a time.  Note that testing two of these drives simultaneously in a two USB 3.0 port enabled motherboard yielded the same results.

The fastest USB 3.0 flash drives are nowhere near as fast as the fastest SSDs.  So we hooked up both Patriot's Pyro 120GB and Corsair's Force GT 120GB SSDs, which Anand reviewed a few weeks ago.  Each drive was attached via a USB 3.0 dock.  Because USB cables are smaller than flash drives, we were able to simultaneously test two flash drives and two SSDs.  Iometer indicates we're still not approaching the RocketU controller card's capacity: 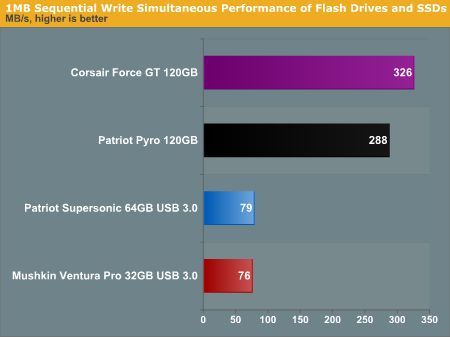 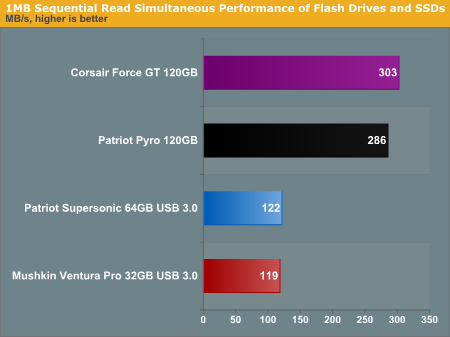 An individual SSD isn't as fast as two (or more) SSDs configured in RAID 0.  We inserted two USB 3.0 flash drives as well as the Patriot Pyro and Corsair Force GT SSDs in (basic Windows 7 software) RAID 0 into the RocketU. 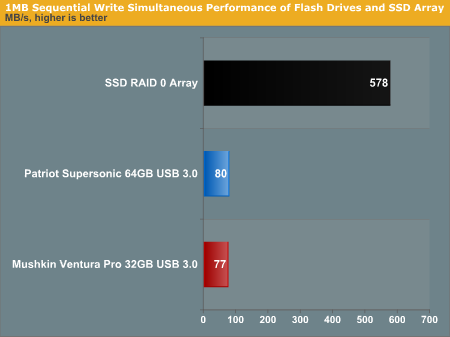 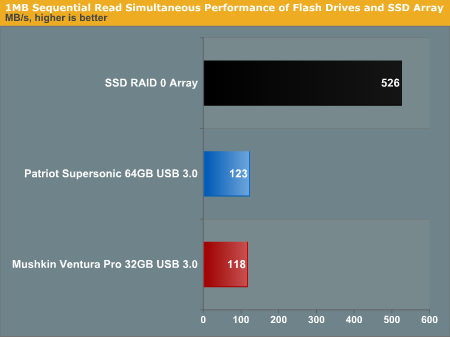 HighPoint's RocketU 1144A is available from Amazon right now for less than $100.  While four USB 3.0 port PCIe x1 controller cards aren't common, most models cost less than half as much as the RocketU.  For typical home users, the HighPoint 1144A is likely overkill - there are adequate solutions available at lower cost.  We couldn't even push it to its limits with one array of the fastest SSDs.  However, if you are a power user with multiple internal and external SSD arrays (or large HDD arrays), then the 1144A is a compelling product.  Of course, these conclusions are in the context of current hardware.  As SSDs continue to get faster and faster, it wouldn't surprise me if, in a few years, there are affordable external SSDs that would work best with the 1144A.

I was pleased by the controller card's stability and functionality - despite repeated hot swapping of various devices, it never stopped recognizing anything, unlike many other controller cards and motherboards that sometimes require a system restart to resume functioning after repeated hot swapping.  I was not pleased by the port placement - though multiple flash drive usage is not the intended usage pattern for the card, there might be times when you'd want to unhook your drive arrays and drop some data onto a bunch of flash disks.  Regardless, HighPoint should be commended for bringing this product to market - it's always better to have capacity available and not need it than need it and not have it available!