We mentioned earlier that Alienware’s M14x uses the same GT 555M, only with 3GB of DDR3 and a 192-bit interface. That means it has 50% more memory bandwidth, so except in cases where we’re bottlenecked by the CPU or shader performance, the M14x ought to be a faster gaming laptop. I ran our Low Quality benchmarks on the MYTHLOGIC Pollux 1400, but I’m going to skip including them here and simply refer you to Mobile Bench. With a gorgeous 1080p LCD and ample GPU power, there’s no reason to run any current games at our Low defaults. Medium Quality is the sweet spot, as you can still hit the native 1080p resolution and break 30FPS; High Quality 1080p unfortunately proves too much for the GT 555M in most of the games we test. 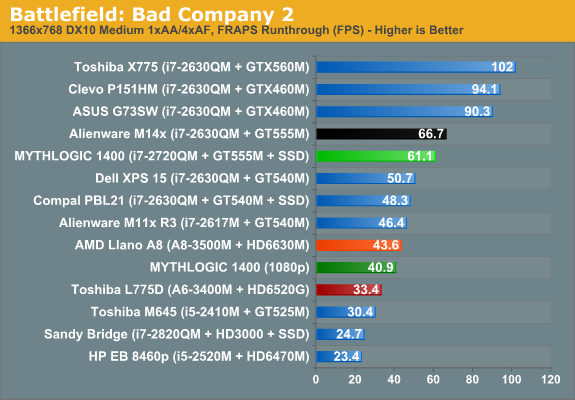 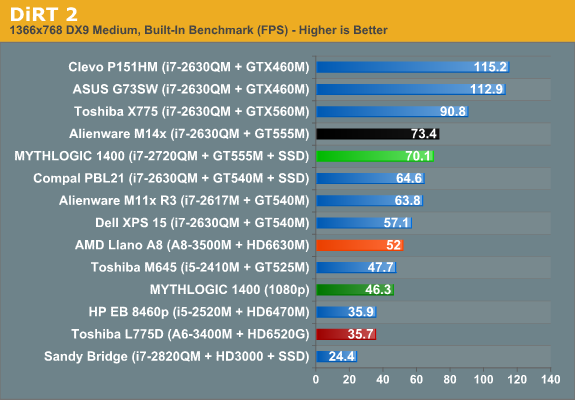 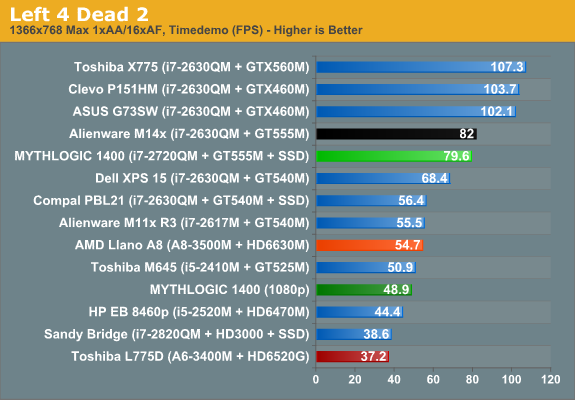 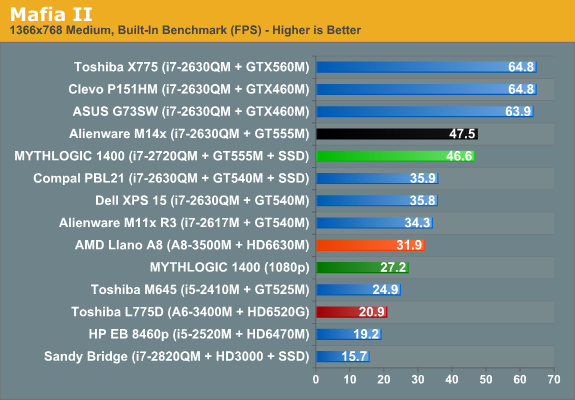 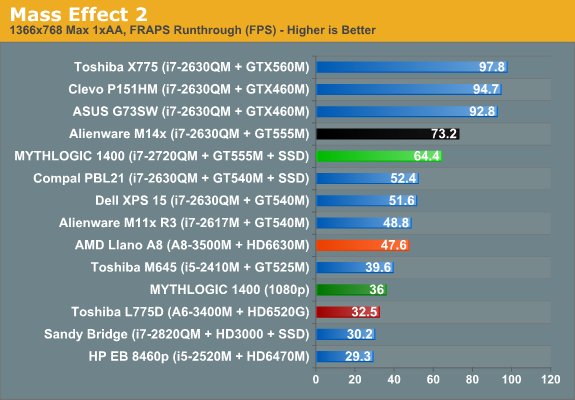 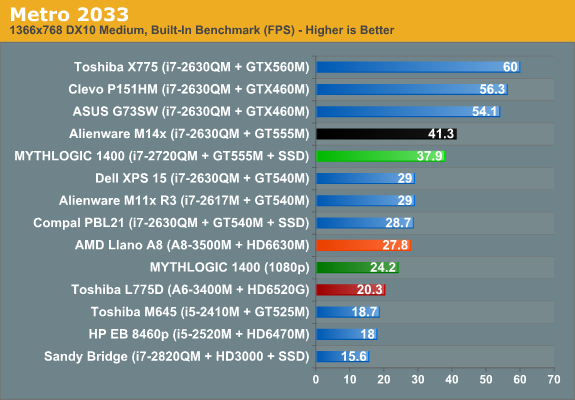 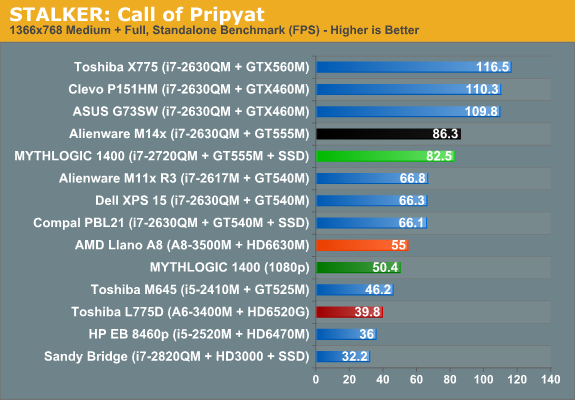 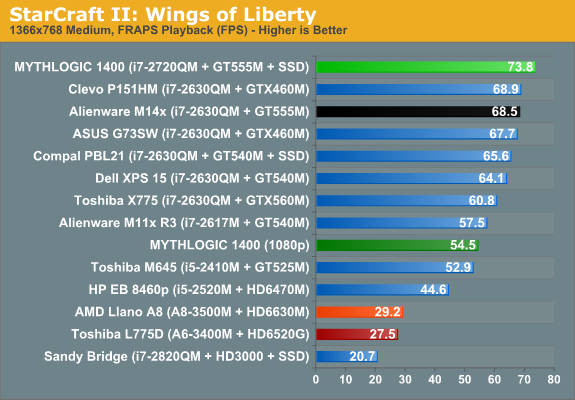 The GT 555M DDR3 ends up being a nice halfway house between the GT 525M/540/550M and the GTX 560/570/580M. Alienware’s M14x is generally faster than the W150HR, which we ascribe to the increased memory bandwidth. The difference ranges from as little as 2% to as much as 14%, with the one exception being StarCraft II; there, the W150HR is 8% faster than the M14x. We’re using the latest 280 series drivers on the W150HR, so that could explain a few of the differences, and StarCraft is known to be more CPU limited at lower settings. Elsewhere, the W150HR still holds a performance advantage of anywhere from 9% to 31% over the closest GT 540M laptop, so even with the same memory bandwidth the extra shader cores are proving useful. At native resolution, all of the games we tested still manage to break 30FPS, except for the two usual suspects: Mafia II and Metro 2033. We expect the M14x lead to increase at our High settings, which tend to stress bandwidth more, but there are plenty of variables so let’s just see how things pan out. 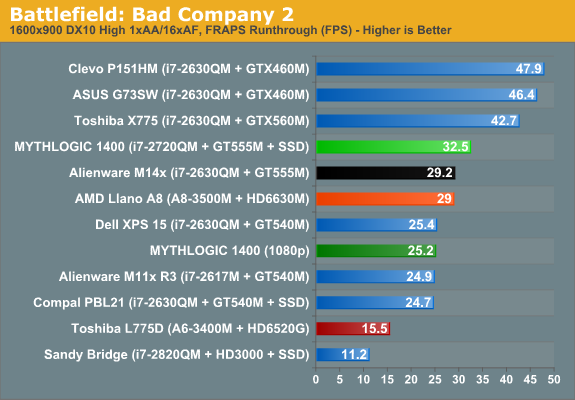 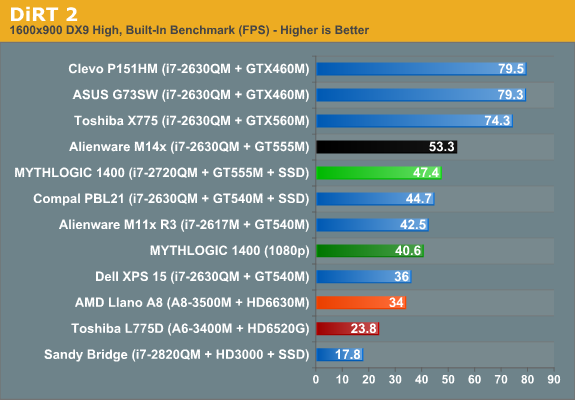 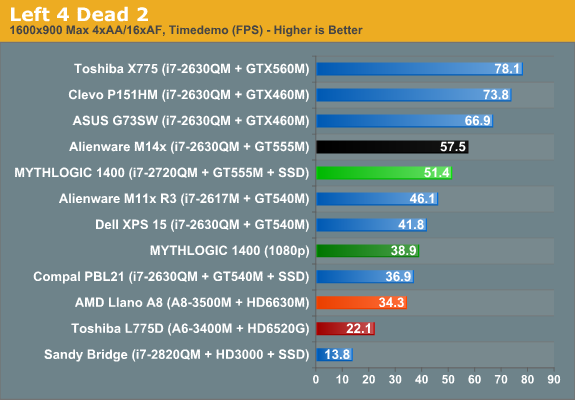 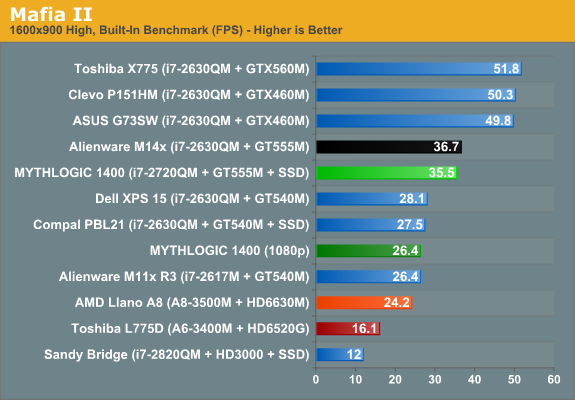 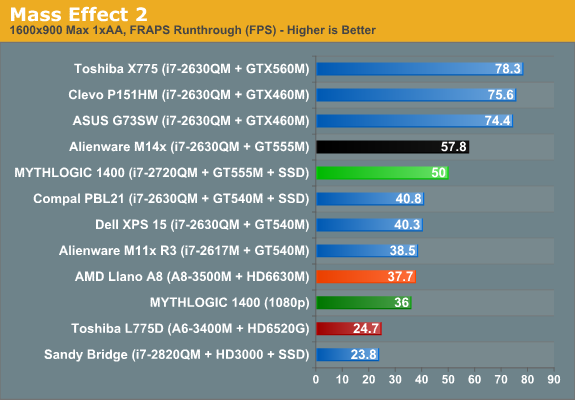 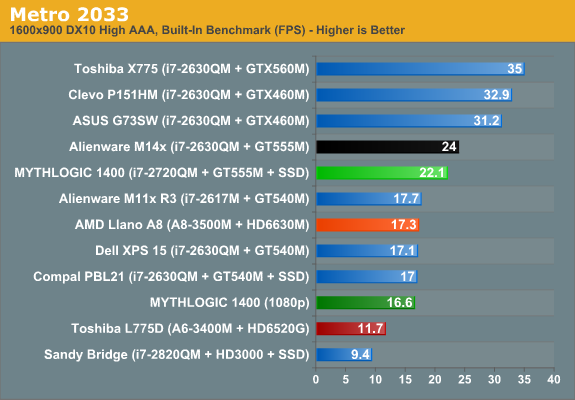 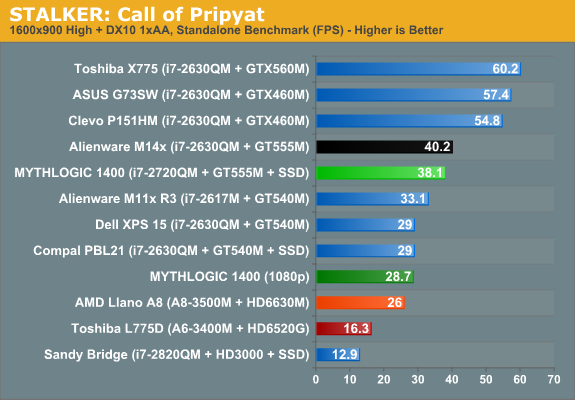 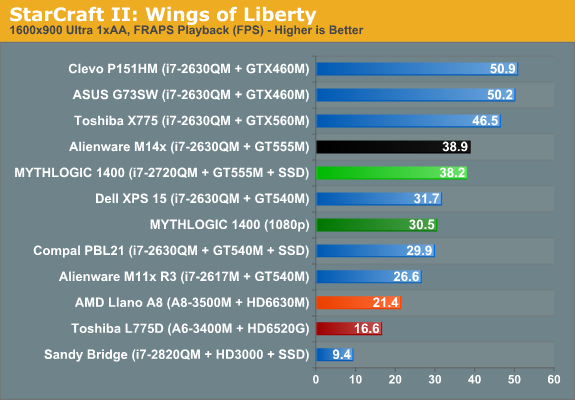 Strange things are afoot at our High settings. First, the W150HR beats the M14x in BFBC2 by 11%; we wouldn’t have expected that to happen, but that’s why we run tests. Again, differences in drivers might be part of the answer, but we’d be surprised to see much in the way of optimizations happening this long after release. The M14x does lead in the remaining games, with a range of 3-16%, so the gap is about the same as at Medium. 1080p performance is below 30FPS in BFBC2, Mafia II, Metro 2033, and STALKER, so the GT 555M is batting about .500 for 1080p High Quality gaming ability. Looking to the next step down, the W150HR leads the closest GT 540M laptop by 6-26%, but four of the eight games show a >20% increase, and only DiRT 2 shows <10%.

I’m actually a bit surprised that the M14x doesn’t acquit itself better in the gaming results; I expected the 50% increase in memory bandwidth to be far more apparent, but on average it’s only showing up as a 6% performance advantage. Even if we toss out the two instances where the W150HR came out ahead, the lead would average 8%. It could be that the faster CPU in the W150HR is helping, and it might be hitting higher Turbo speeds on average thanks to the larger chassis and better cooling; driver differences may also be a factor. The only thing we can say for sure is that the difference between the GT 555M 192-bit and GT 555M 128-bit DDR3 models is usually less than 10%. That said, there’s still a rather large gap between the GT 555M and the GTX 460M/560M. If you want 1080p laptop gaming without anti-aliasing at high quality settings, you really need at least a GTX brand NVIDIA GPU (or roughly an HD 6850M on the AMD side).